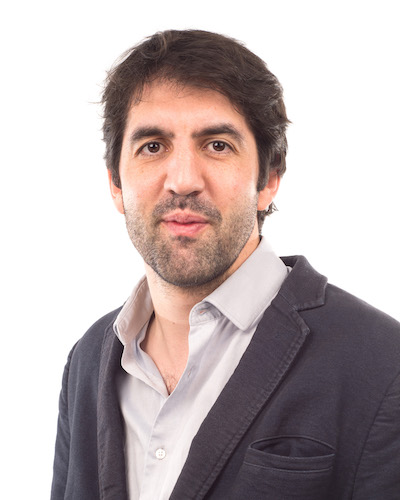 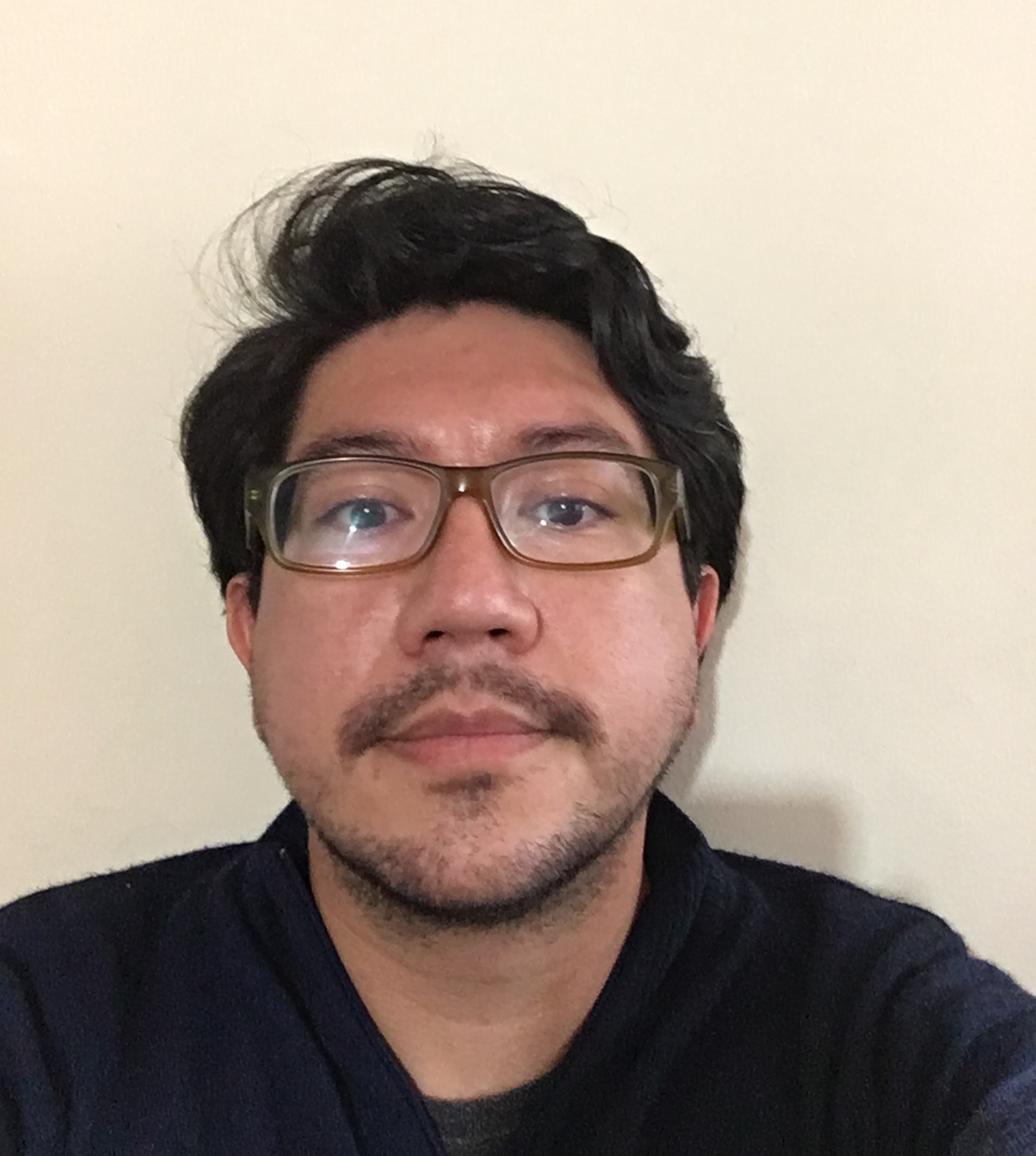 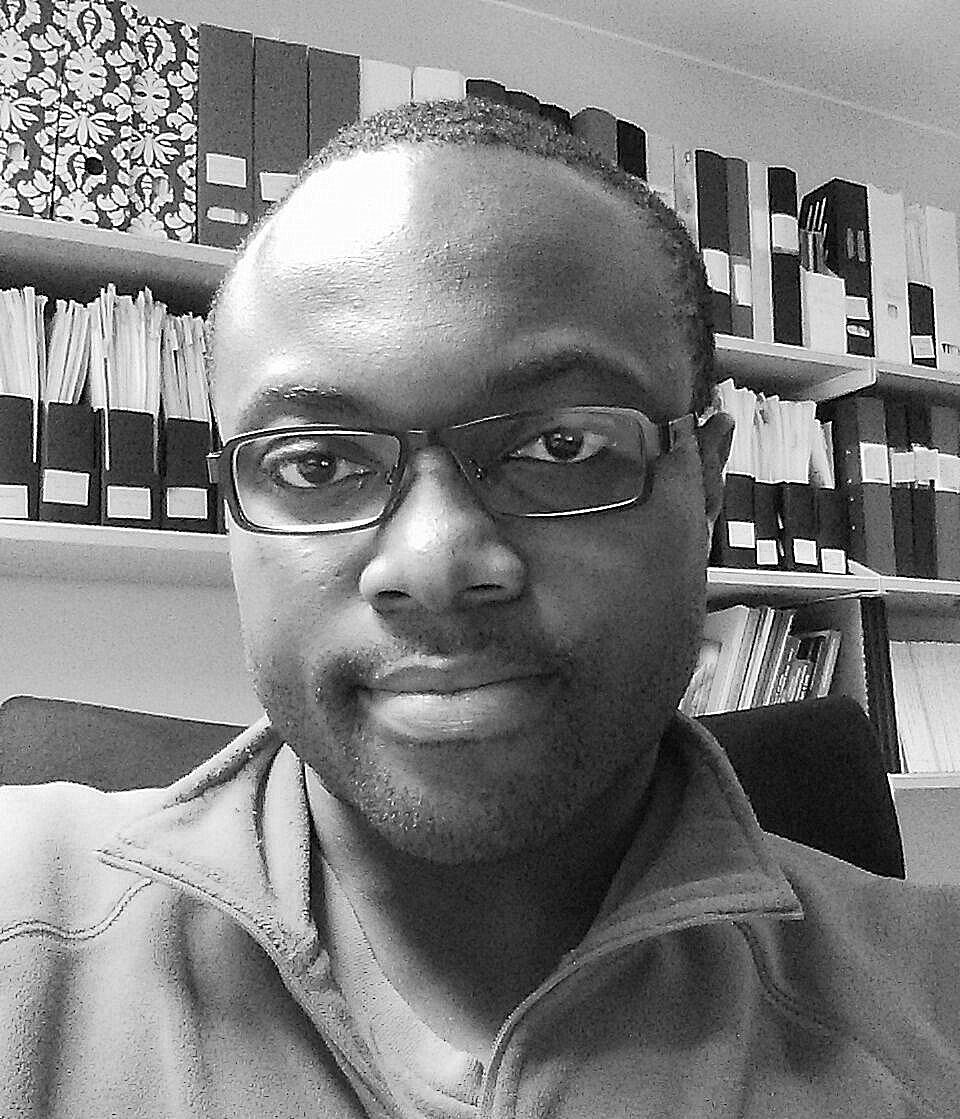 Rising demand for agricultural land is a major driver of deforestation, contributing to biodiversity loss and climate change (Curtis et al. 2018, Barlow et al. 2018). A range of actors have long argued that securing the property rights of local populations and improving commons management may help protect forests (Ostrom 1999, Bodin 2017). Indeed, a recent ‘Global Call to Action’ backed by more than 300 organisations, argued that “insecure land rights are a global crisis … undermining our ability to confront climate change” (Pearce 2016). Conservationists have typically concentrated on tenure interventions focused on forests, such as the creation of protected areas. Yet, the ability of protected areas to preserve forests is limited (Pouzols et al. 2014, Watson et al. 2014) and there can be important trade-offs between conserving ecosystems in this way and improving living standards and economic prosperity (Frank and Schlenker 2016). Indeed, while many low-income countries have implemented programmes to improve rural land governance, they have often focused on improving the security of agricultural land (Byamugisha 2013). The impact on forests of such an approach is, however, very uncertain (Baland and Platteau 2000, Robinson et al. 2018). A few studies have evaluated the impact of agricultural land rights security on deforestation, mostly in South America and Southeast Asia, and have found conflicting results depending on the context and characteristics of landholders (e.g. Probst et al. 2020).

A programme to register land rights in Benin

Benin has one of the highest deforestation rates in the world, having lost approximately a quarter of its forested area between 1990 and 2015 (FAO 2015). The main cause of this deforestation is agricultural expansion (Curtis et al. 2018, Bidou et al. 2019). In 2009, the government of Benin rolled out an experimental scale-up of the Plans Fonciers Ruraux (PFR) programme with the objective of both increasing agricultural production and protecting natural resources. The programme demarcated landholdings within villages, documented usage rights, and created institutions to facilitate conflict resolution.

While most of the landholdings demarcated by the PFR programme comprised of agricultural plots, forested areas were also demarcated in several ways. At times, areas of communally managed forest were documented explicitly in the PFR – as an example, Figure 1(a) shows a demarcated area with some tree cover explicitly labelled as a “domaine sacré” (sacred ground) within the PFR. Areas of forest also frequently occur on areas registered in an individual’s name, such as those in Figure 1(b), though even here the individual is typically described as a representative of a lineage or “collectivité”.  Even when forested areas are not included within the PFR, they may be effectively demarcated by the programme.  For instance, Figure 1(c) shows a small forest which is encircled by demarcated landholdings, while Figure 1(d) displays an area of forest that lies between two demarcated villages. Overall, therefore, the PFR programme effectively demarcated many forested areas in addition to agricultural plots. 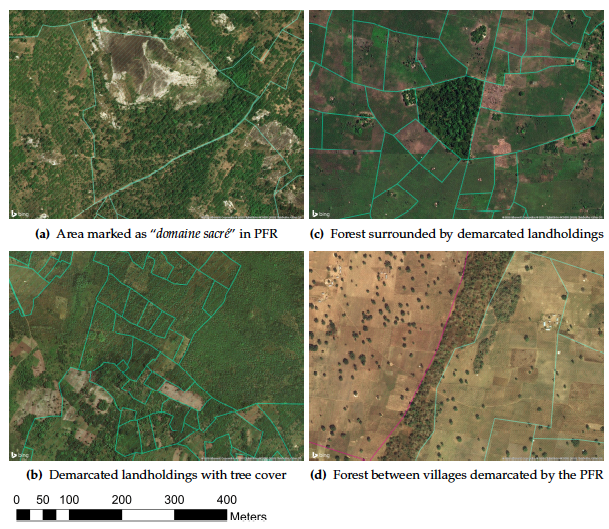 The impact of the PFR programme on tree cover loss

In a recent paper (Wren-Lewis et al. 2020),  we evaluated the impact of the randomised rollout of the PFR programme across the country on forest cover. The rollout selected 575 eligible villages and then organised 80 lotteries to randomly pick 300 treatment villages. Activities began in these villages in 2009, and to this date the programme has not been expanded to the control villages.

Figure 2 summarises the main findings of our work. Our estimates suggest a reduction in tree cover loss of around 20% and a reduction in fires of 5% in the areas containing treated villages. Using the Landsat measure, we estimate that the programme helped avoid 600 Ha of extra tree cover loss by the end of 2017. 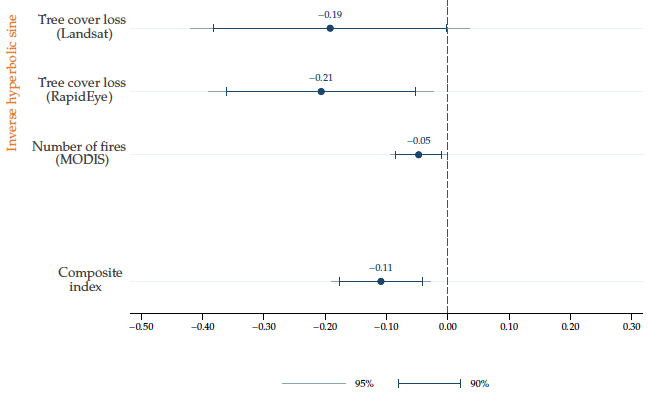 A potential concern is that the measured reduction in tree cover loss could be the result of a displacement rather than a net reduction. This could occur in two ways:

What explains the reduction in tree cover loss? 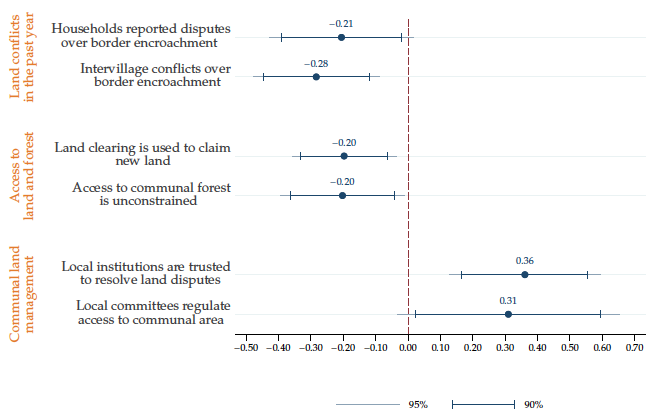 Note: The outcome variables represented in this figure were standardised. This helps compare the effect sizes across variables as variation in units of standard deviation.

Curbing deforestation is a major environmental challenge, and addressing it requires assessing the effectiveness of a range of policies and understanding the mechanisms behind their successes or failures. Evidence from the PFR programme in Benin suggests that land formalisation programmes focused on agricultural land can generate an important positive externality in reducing forest loss. We cannot, however, directly infer the extent to which the results are generalisable, and more studies are therefore required to identify how deforestation impacts will vary in other contexts.

Since deforestation trends are driven by several factors and there is likely no silver bullet to address them all, policymakers should adopt several approaches depending on local contexts. In this sense, land formalisation may be an important complement to other programmes which have been shown to be effective elsewhere, such as payments for ecosystem services (Jayachandran et al. 2017). Programmes such as these often rely on defining who is responsible for the management of a given forest, and therefore implicitly formalise a system of rights. In this context, it is important to have evidence on the direct impact of the formalisation process on deforestation.

Probst, B, A BenYishay, A Kontoleon and T NP dos Reis (2020), "Impacts of a large-scale titling initiative on deforestation in the Brazilian Amazon", Nature Sustainability, 1-8.