In harm’s way? Climate change and road investment in Vietnam 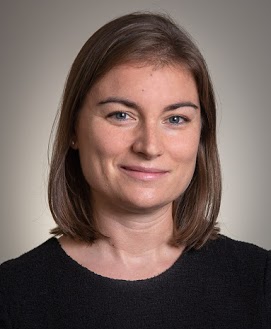 Human settlements have long been drawn to coastal regions, reflecting their natural advantages for agriculture and trade (Smith 1776). The advantages of coastal proximity may, however, be eroded as a country develops, as structural change reduces dependence on agricultural resources and inland transport networks develop.

It is also now widely accepted that environmental change is likely to impose significant costs to coastal proximity in the coming decades, with many-fold increases projected in populations and assets exposed to coastal disasters (Adger et al. 2005, Hallegatte et al. 2013).

Despite these trends, coastal areas continue to attract huge infrastructure and spatial policy investments worldwide. In recent research (Balboni 2019), I consider whether such large investments in vulnerable coastal regions are justified, using data on road investments in Vietnam.

Coastal advantage in Vietnam: A reversal of fortune?

Like many developing countries in Asia, Vietnam is a historically agrarian economy with population and economic activity concentrated in the low elevation fertile flood plains of deltas and coastal harbours. In 2000, the coastal zone below ten metres elevation contained 20% of Vietnam’s land area and 55% of its population (McGranahan et al. 2007).

Following a wide-ranging series of economic reforms beginning in the late 1980s, the locus of economic activity has shifted inland: Both population and wage growth have been relatively slow in coastal areas as the focus of production and employment has moved out of agriculture.

Looking forward, Vietnam is highly and increasingly vulnerable to coastal disasters and rising sea levels. Under a one metre rise in the sea level – well within the range of forecasted increases over the next century – 5% of Vietnam’s land area will be inundated (GFDRR 2015).

The effects of investments in roads

Despite these trends, infrastructure investments continue to be strongly concentrated in coastal and low-lying regions. I consider the effects of investments in road upgrading made between 2000 and 2010. This was a period of enormous investment in roads, reaching 3.6% of GDP by 2009 – a very high level by regional and international standards.

As shown in Figure 1, the coastal concentration of these investments is striking. The length of main roads increased by 262% in coastal areas at less than five metres elevation, compared to 156% across the country as a whole. Districts in this zone received differential allocations, even allowing for variation in district land area and population. 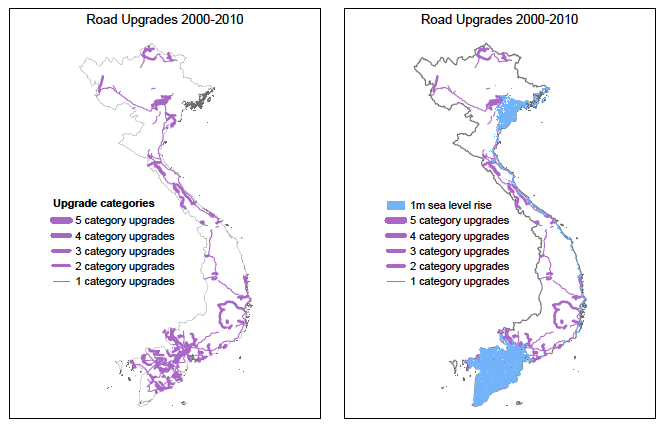 Is such significant coastal investment justified?

To answer this question, I develop a detailed model of the evolution of Vietnam’s economy over time. The model captures the dynamic effects of road investments on the distribution of economic activity across space as coastal fortunes change and environmental change proceeds. I combine the model with detailed geo-referenced micro-data on migration, economic activity, transport networks and projected environmental change in Vietnam.

The results suggest that the road investments made in Vietnam from 2000 to 2010 led to large welfare gains. Under a central sea level rise scenario over the next century, the net present value of aggregate welfare is estimated to be 1.74% higher as a result of the road upgrades than it would have been in the absence of these investments.

Given the coastal concentration of these upgrades, future sea level rise has an important impact on gains. The same road upgrades would have resulted in sharply higher gains of 2.5% in a scenario without future environmental change, reflecting the significant share of investments that are lost to inundation or that connect inundated areas.

The central finding of the analysis is that much higher gains could have been achieved by alternative allocations of road upgrades of the same total cost but concentrated further inland. I consider the effects of counterfactual network upgrades based on allocation rules used by transport planners in other contexts. All of these allocations would have been less coastally concentrated than the realised upgrades.

The results suggest that welfare gains 72% higher than those realised under the status quo could have been achieved by a foresighted allocation of road upgrades avoiding the most vulnerable regions. This allocation assigns upgrades between district pairs that lie outside the at-risk area below one metre in order of decreasing market potential, a distance-weighted measure of market size. Alternative allocations maximising market potential among all districts, or among districts outside a wider risk area below five metres elevation, also outperform the status quo but with lower relative gains of 64% and 29% respectively.

The results suggest that the degree of coastal favouritism in road upgrades would have been unwarranted even without the future impacts of sea level rise. In a scenario with no future environmental change, the allocations maximising market potential across the country or outside the one metre coastal zone, yield estimated welfare gains 55% and 48% higher respectively than those achieved by the realised upgrades.

This may reflect path dependence (Krugman 1991, Bleakley and Lin 2012, Allen and Donaldson 2018) resulting from, for instance, infrastructure allocation decisions being slow to respond to a reversal in coastal fortunes over time or policy myopia (Nordhaus 1975, Rogoff 1990, Rodrik 1996).

Figure 2 summarises the welfare gains relative to the status quo implied by the counterfactual allocations. The Figure highlights the large unrealised gains available even in the absence of future environmental change. It also makes clear that these gains are sharply accentuated by climate change, particularly for the counterfactuals avoiding the most vulnerable regions. 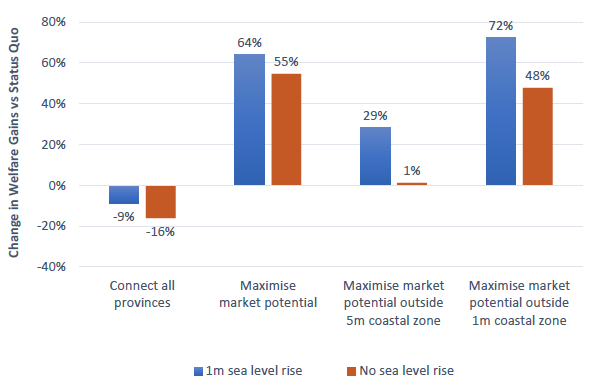 These results make clear that future environmental change fundamentally affects the gains from transport infrastructure investments made today and that the welfare gains from avoiding vulnerable regions are extremely large. Given the huge investments being made in transport infrastructure worldwide – and the projected intensification of this trend as developing countries expand their transport networks – it is crucial that the placement of these investments reflects the changing economic conditions and climate risks.

The results of this analysis suggest that allocations may need to change significantly in light of the estimated 177 million people currently living on land that will be below sea level or regular flood levels by 2100 (Climate Central 2014).

Krugman, P (1991). “History and industry location: the case of the manufacturing belt”, The American Economic Review, 80-83

Smith, A (1776). An inquiry into the nature and causes of the wealth of nations: Volume one, London: printed for Strahan, W and Cadell, T.