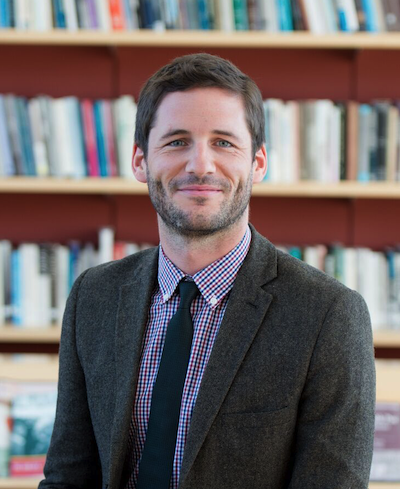 Civil conflict deters private investment, undermines state capacity, and destroys physical and human capital. In Africa alone, 1.23 million people were killed in civil conflict events during the 30 years between 1989 and 2018. During this period, annual rainfall fell well below average and droughts became more common as a consequence of climate change (Thomas and Nigam 2018).

Of all the regions in the world, Africa is expected to be particularly susceptible to the deleterious effects of climate change. Many African economies are primarily agricultural and are characterised by unstable governance. However, another less-recognised, yet crucially important, reason for Africa’s exposure to climate change is the presence of a very large pastoral population that engages in extensive animal husbandry. Approximately, 268 million people – 22% of Africa’s population – obtain the majority of their income from animals, and 43% of Africa's landmass supports pastoral activities (FAO, 2018). Many of these pastoral groups are transhumant, meaning that they migrate seasonally with grazing herds.

In typical years, neighbouring agricultural and transhumant pastoral groups coexist in a symbiotic relationship characterised by the seasonal movement of transhumant pastoralists and their herds. These movements are illustrated in Figure 1. During the wet season, agriculturalists farm on productive lands while transhumant pastoralists exploit more marginal lands that produce sufficient plant biomass (or ‘phytomass’) for their livestock. After the final harvest, the pastoralists migrate along well-established corridors to arrive at the agricultural farmlands for the dry season, where they benefit from the year-round availability of phytomass while providing organic fertiliser in exchange. These journeys can range from hundreds of metres to hundreds of kilometres. A photograph of these movements is provided in Figure 2 and a depiction of these spatial movements in West Africa is shown by the map in Figure 3.

Figure 1 An illustration of the seasonal movements of transhumant pastoralists 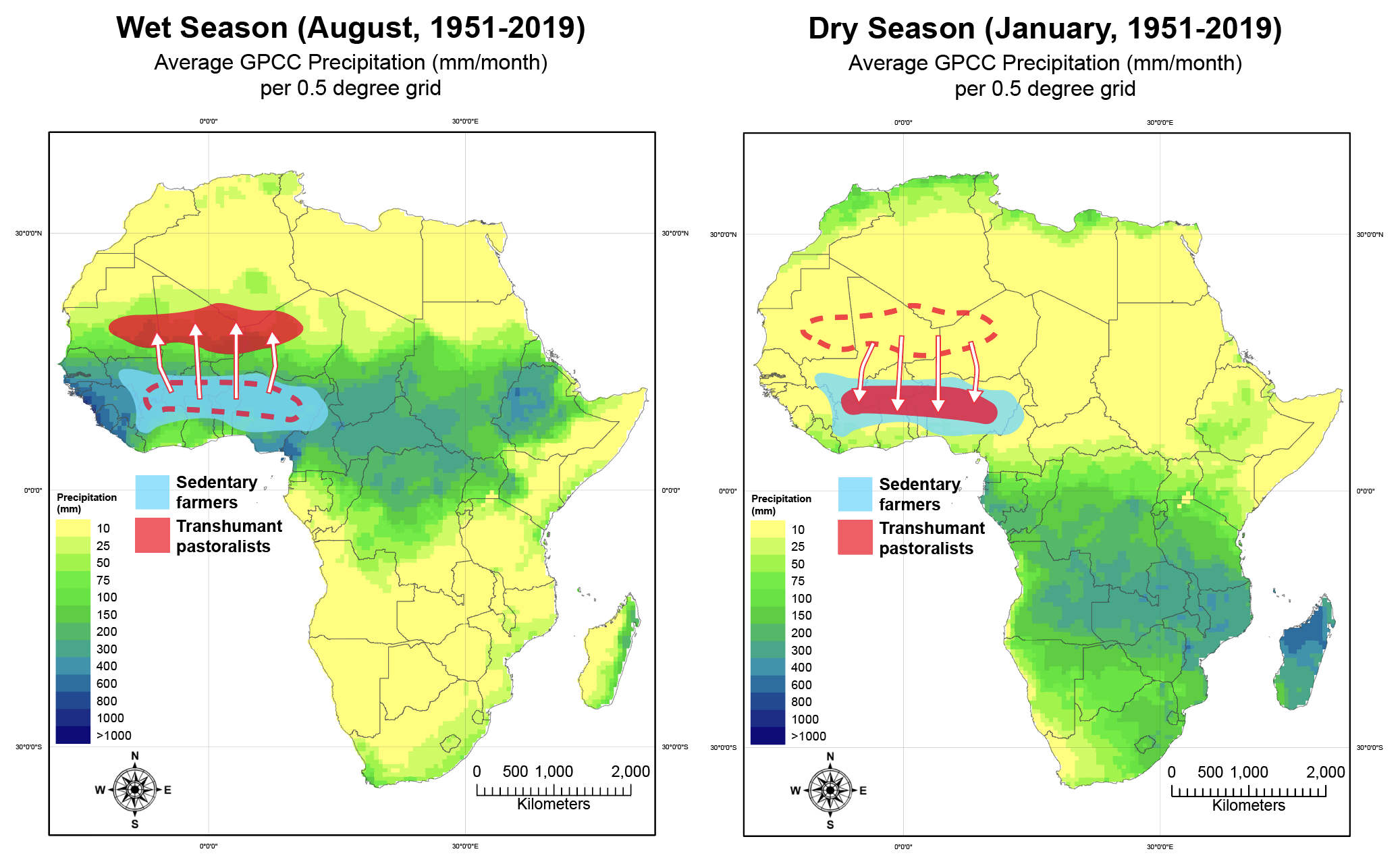 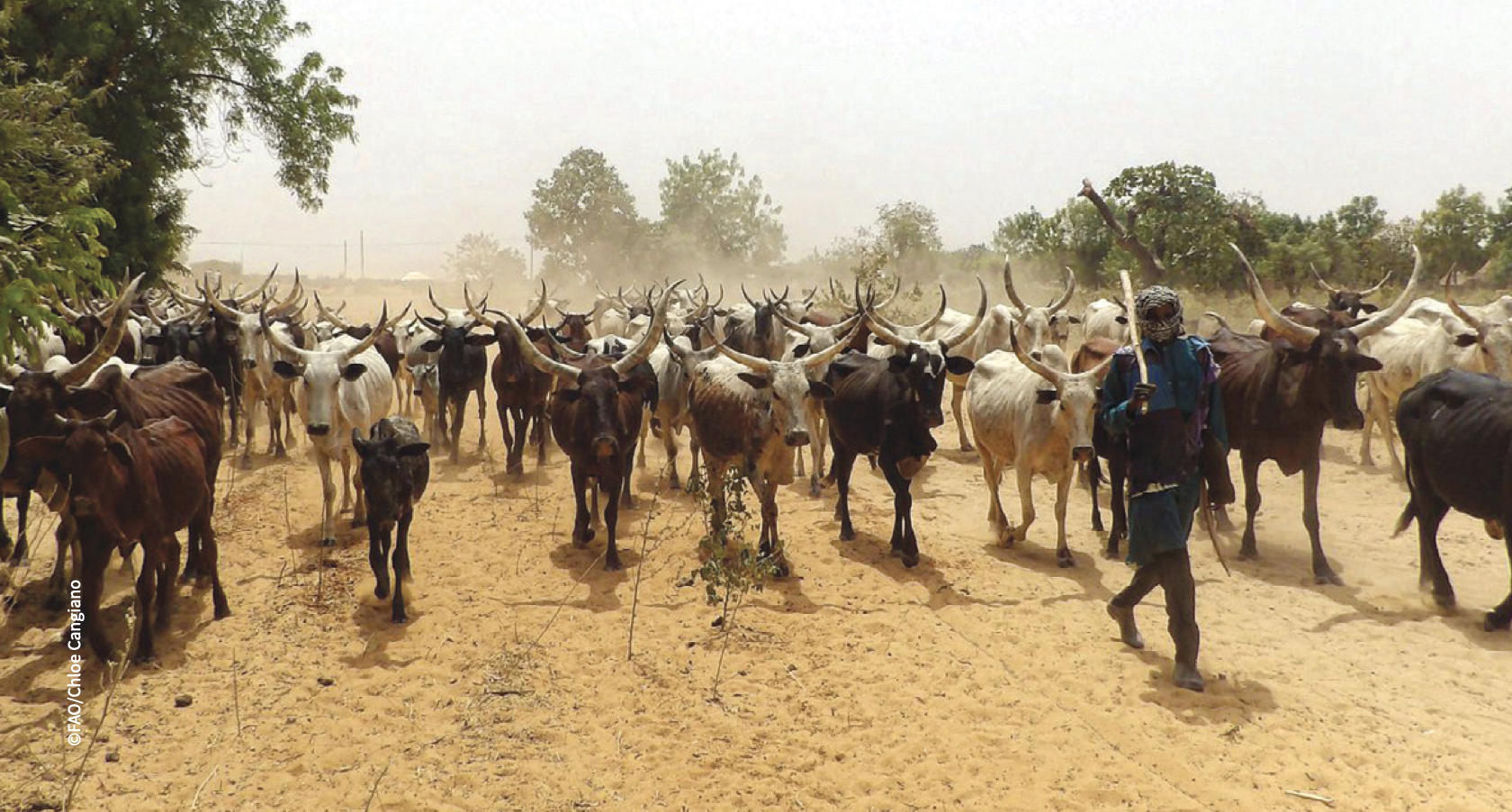 In years with scarce rainfall, there is not enough phytomass produced on the marginal grazing lands to sustain the pastoralists’ livestock during the wet season. They are thus forced to migrate to agricultural farmlands before the onset of the dry season. If they arrive before the harvest, their animals may eat or trample crops, or otherwise generate competition for scarce resources such as water or pasture. This can lead to disputes that eventually escalate into violent clashes. Visual evidence of such conflicts is provided by the photographs in Figure 4, which are taken from Amankwaa (2019). The photos, taken by the Ghana Police Service in 2013, show maize crops destroyed by the pastoralists’ cattle, and the cattle killed by farmers.

This mechanism generates a clear hypothesis regarding the effects of climate change on the African continent: Droughts in pastoralist territories lead to conflicts in neighbouring agricultural lands during the wet season. In a recent study (McGuirk and Nunn 2021), we test this hypothesis using geocoded conflict data. To identify which ethnic groups are transhumant pastoral, we use data from the Ethnographic Atlas, which contains information on the pre-colonial economic and cultural practices of societies. Our measures combine information from the Atlas on the historical importance of animal herding, as used by Becker (2019), with information on the mobility of the group.

Our analysis proceeds in several steps. We first examine whether violence is more prevalent in territories surrounding transhumant pastoral groups, and find that the level of conflict incidence in these areas is indeed higher. Interestingly, we find that the effects are strongest for civil conflicts, i.e., conflicts that involve the government (police, military, conservation officers, etc.). This is consistent with anecdotal accounts of state forces siding with agricultural landowners in disputes with pastoral groups.

To be certain that our estimates are capturing the specific mechanism hypothesised above, we undertake a series of additional empirical tests. The hypothesis suggests that when adverse rainfall shocks lead to less plant growth, it induces transhumant pastoral groups to migrate to nearby agricultural lands, which causes conflict during the wet (i.e., growing) season. This produces three testable implications. First, adverse rainfall shocks matter because they affect phytomass, which in turn affects conflict. Second, shocks experienced by transhumant pastoral groups should cause conflict in nearby agricultural lands rather than non-agricultural lands. Third, adverse rainfall shocks should affect conflict during the wet season, not the dry season. We test each of these implications of the hypothesis and confirm that they are true in the data.

As in the cross-sectional exercise, our main estimates are driven by conflicts that involve state actors. As noted, this is consistent with accounts in which state forces represent agricultural landowners and non-state forces represent pastoral groups. Our analysis probes this further by investigating whether the representation of transhumant pastoral groups in national government affects our findings. We find that the more transhumant pastoral groups are represented in national politics, the smaller our estimated effects become.  This result is consistent with state forces responding with violence to incursions by pastoral groups when pastoral groups are politically excluded. However, when these groups share political power, they are likely afforded grazing rights that circumvent violent clashes. This suggests that climate-induced conflict between farmers and herders can be mitigated with appropriate political representation.

In addition to contributing to a deeper understanding of the sources of conflict on the African continent, our findings also provide lessons that may be helpful when estimating the causal effects of climate change and associated adverse weather events. Our estimates show how weather events in one area can trigger conflict in another. However, if researchers fail to correctly model cross-territory spillover effects, they might generate much smaller estimates of the adverse effects.

A potential solution to this could be to choose units of observation that are sufficiently large to capture cross-territory effects. To see if this solves the problem in our setting, we undertake such an exercise by studying the relationship between rainfall and conflict at different levels of analysis, ranging from a 1-degree cell to a 8-degree cell. We find that increasing the size of the cells being studied does not fix the problem. Regardless of size, we estimate effects that appear to be biased towards zero.

This is likely because the spillover effects we identify are not uniform across the continent. Instead, they are specific to certain locations where there is a symbiotic relationship between transhumant pastoralists and sedentary farmers. Motivated by this, we then allow the estimates in the analysis above to differ depending on whether the geo-climatic conditions of a cell are suitable for both agriculture and herding. We then find that the cell size matters. With larger cells, we estimate larger effects, but only for those cells that are suitable for both activities.

This exercise indicates that in the presence of spatial spillovers, simply adjusting the size of the cells being studied is not sufficient. In settings where the spillovers are not universal across space, one also needs to have a minimal understanding of the source of the spillovers. This highlights that details of the local cultural context are important while studying the effects of climate change, and that these must be accounted for by scholars and policymakers.

Becker, A (2019), “On the Origins of Restrictions on Women’s Sexuality”, Working paper, Harvard Business School.

FAO and CIRAD (2012), Information System on Pastoralism in the Sahel: Atlas of Trends in Pastoral Systems in the Sahel, 1970-2012, Paris: Food and Agriculture Organization of the United Nations and La Recherche Agronomique pour le Development.