There has been considerable progress in the last two decades towards the UN’s 7th Sustainable Development Goal (SDG7): “access to affordable, reliable, sustainable, and modern energy for all by 2030”. Since 2000, the share of people with access to electricity in least developed countries has more than doubled.1 What impacts can we expect this type of energy access to have on people’s lives?

Work in South Africa offers one example of what can happen when rural households get new access to free electricity connections and low-cost power (Dinkelman 2011). My study examines how a large-scale, government-financed programme to electrify rural households in South Africa changed the environment of work at home as well as in the market, over a five-year period.

In the mid-1990s in South Africa, the national power utility (Eskom) committed to addressing apartheid-era infrastructure deficits by financing new electricity connections for 300,000 households every year. These new connections were provided to households for free, and power could be purchased at very low marginal costs. Eskom largely succeeded in meeting their connection targets. Household electrification rates climbed from 35% of all households in 1990 to 84% in 2011 (StatsSA, 2012).

A key challenge in the analysis was to establish that changes in outcomes in connected versus unconnected communities were caused by new connections to the grid and not by some other factors that were changing simultaneously. Luckily, the context of electricity rollout allowed the author to exploit a programme feature that was unlikely to be related to other economic trends: Eskom had clear incentives to connect communities that were the least costly to electrify.

One of the key factors driving Eskom’s cost of connecting a household at the time was land gradient. Flatter communities were cheaper to electrify, due to engineering constraints. Capitalising on this insight, I estimated the effect of rural household electrification by comparing outcomes across communities that differed only in their land gradient. Flatter communities, while more likely to be connected to the grid, were otherwise similar to non-connected communities.

What happened when electricity arrived in these communities? My first main finding is that over a span of five years (the time between the Census waves), electrification transformed the technologies used in home production.

Once communities became connected to the grid, traditional candlelight and wood-fire cooking declined, and electric lighting and cooking increased. 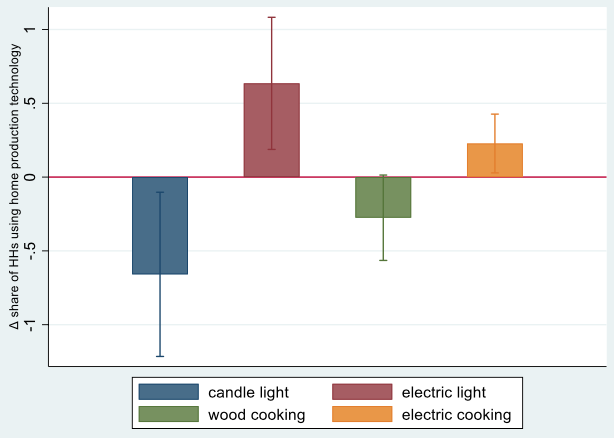 Notes: Figure shows coefficient estimates and 95% confidence intervals from instrumental variable regression results in Table 8 of Dinkelman (2011). Each bar shows the impact of electrification on the share of households using different technologies for home production, conditional on all covariates.

In communities chosen to be electrified by virtue of their flatter land gradient, the use of candlelight declined by a substantial and significant 65 percentage points, and electric lighting in the home increased by an almost equivalent 63 percentage points. The use of wood for cooking declined by 27 percentage points and cooking with electricity increased by 23 percentage points. Substitution from candlelight to electric lighting was more than twice as large as substitution from wood to electric cooking. This difference most likely reflects an additional constraint on using electricity: households need resources to invest in complementary electrical appliances, even when grid connections are free.

As work in the home reorganised around the new technology, electricity also affected how much women worked in the market. Electrification likely relaxed women’s time constraints in the home for two reasons: it enabled more efficiency in home production (cooking is faster with electric stoves), and it extended the hours available for home and market work (as home production can be undertaken even during night hours with electricity).

My second main finding is that communities that became connected to the grid by virtue of their flatter gradient experienced significant increases in the share of women working in the market. Relative to baseline employment rates, female employment in market work increased. Using a different dataset from repeated cross-sectional household surveys, I find that women also worked more hours in total in communities experiencing expanding electrification rates, although they did not earn more. These facts point to electricity raising market labour supply by more than any impacts on labour demand. Men’s work in the market did not change significantly in the wake of the new electrification.

The results for women suggest that in a non-electrified community with the median number of women (just under 300), the arrival of the grid raised the number of women working from 19 to 45. This implies an upper bound of electrification on female work: after five years, across all electrified communities, about 15,000 women are newly employed relative to the baseline population.2 I estimate that electrification contributed about 0.75% of all new female jobs created across the country in this time period (Casale et al. 2004).

Will rural electrification always lead to such changes?

Recent work suggests some caution in extrapolating these South African results to other settings. Three examples illustrate the importance of considering context:

Key aspects of the context that may contribute to different findings are the different time frames of analyses (short, medium, or longer runs), differences in the costs of connecting to the grid (fully, partially, or unsubsidised) and in the costs of using power relative to local income levels, and differences in the reliability of this power. In the specific case of South Africa, household connections were free, power was reliably provided 24 hours a day, and the marginal cost of using small quantities of power was low (Prasad 2019). These institutional details are likely to be highly relevant for understanding the effects found in South Africa.

The importance of considering context

In the race to electrify Africa, the continent that has the farthest to go to meet SDG7 access goals, policymakers should be mindful of context. Researchers are working to reconcile small to zero impacts of new electricity connections in the short-run in some places, with larger positive impacts on home production technologies and other economic outcomes over the longer run in other places.

In the meantime, the results of my study suggest the following policy take-away: if conditions are right – connections are free, power is cheap and reliable, and households can afford to use electricity with complementary appliances – rural electrification has the potential to transform the way work is done at home, and affect women’s labour market outcomes. It may still take some time, though.

Editors' note: This column is part of our series on electrification.

Burlig, F and L Preonas (2019), “Out of the darkness and into the light? Development effects of rural electrification”, Revise and Resubmit, Journal of Political Economy.

[1] This 15,000 comes from applying the estimated impact on female employment (9.5 percentage point increase in employment) to the entire group of electrified areas (total female population 165,000).