The Alibaba effect: Spatial inequality and the welfare gains from e-commerce 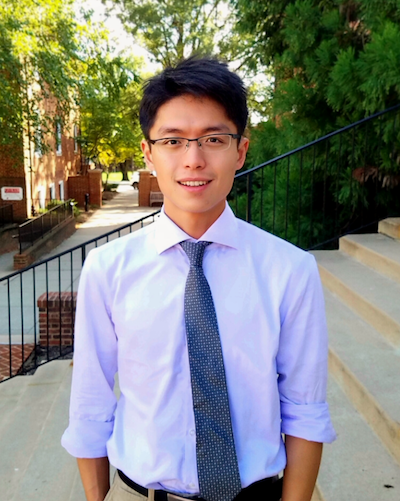 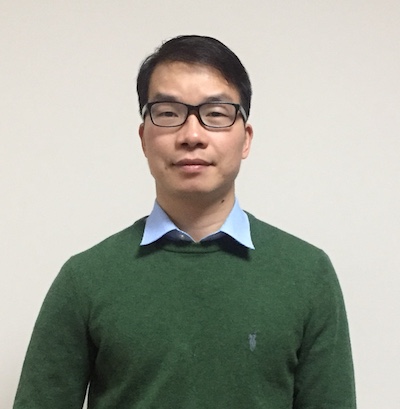 Assistant Professor of Economics, Shanghai University of Finance and Economics 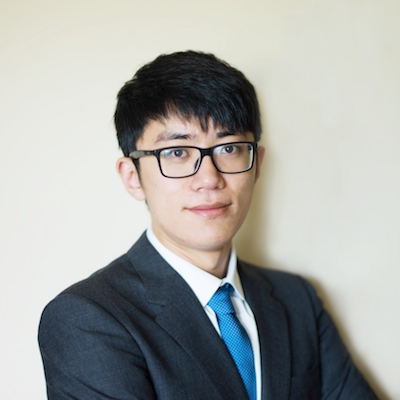 Recent studies (Atkin and Donaldson 2015, Handbury and Weinstein 2014, Feenstra et al. 2017) document that consumers in small and remote places face higher prices and fewer varieties, which contribute to large differences in living standards across locations. Trade costs play an important role in shaping these spatial differences. First, because of the fixed costs associated with setting up a physical store and entering a market, small cities are less attractive to firms. This reduces the number of product varieties available in small cities. Second, firms incur higher transport costs when selling to remote cities, making prices higher in these markets. In developing countries, due to limited transportation infrastructure and underdeveloped retail sectors, consumption opportunities in small and remote cities are especially limited.

In recent work, we use the empirical context of China to study the role of e-commerce in reducing spatial consumption inequality. China represents the world’s largest retail e-commerce market, with e-commerce in the country growing at an average annual rate of 35% in the past decade. In 2016, $851 billion was spent online in China, accounting for 15% of the country’s total retail sales, or 37% of worldwide retail e-commerce sales.1 On the other hand, China’s traditional retailing sector is relatively less developed. Modern retail stores are clustered in large cities, leaving much of the country underserved.

Taobao and Tmall, both subsidiaries of the Alibaba group, are two leading online shopping platforms in China. We have prefecture-level aggregate sales data from both platforms in 2014, which account for over 80% of China’s total retail e-commerce sales in that year.

Since consumers in smaller and more remote markets have limited access to varieties in bricks-and-mortar stores, but similar access to online varieties, it follows that they will spend a larger share of their expenditure on online goods. We begin by documenting the empirical relationship between the ‘online expenditure share’ and the size and remoteness of the market (i.e. Chinese prefectures). Population is used to measure market size and market potential is used to measure (the inverse of) remoteness.2

Figure 1 shows that online expenditure share is negatively correlated with both population and market potential (the inverse of market remoteness). 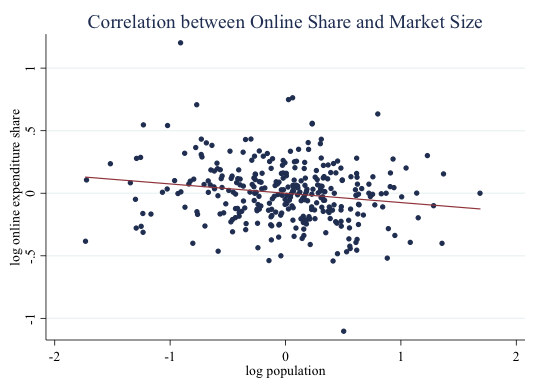 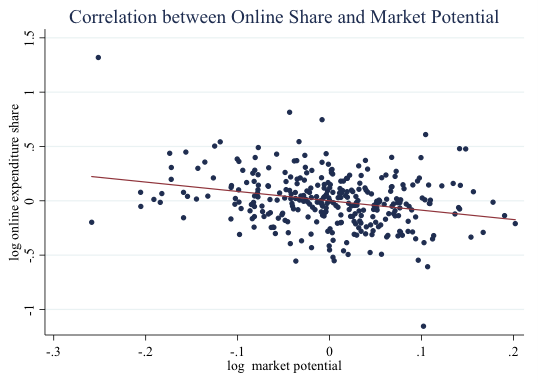 Drawing on the revealed preference insight, Arkolakis et al. (2012) show that the share of expenditures on foreign goods is a sufficient statistic of welfare gains from trade. Following the same intuition, we show that our results imply that residents in smaller and more remote cities enjoy larger gains from e-commerce.

To quantify the welfare impacts of e-commerce and to investigate the underlying channels, we develop a multi-region general equilibrium model which allows for both traditional retailing and e-commerce. We calibrate model parameters to match salient features of the Chinese economy. Our calibrated model features large spatial differences in access to varieties of goods, cost of living, and real wages. We perform a policy experiment and solve for a counterfactual equilibrium in which e-commerce is prohibitively costly.

We further study the channels of the welfare gains. We decompose the changes in real wage into two components: nominal wage and price level. We find that both components are larger for smaller and more remote cities, and that these two channels contribute about equally to the differential welfare gains from e-commerce across cities of different sizes. Decomposing the channels underlying the change in nominal wages, we find that the increase in labour demand from new entrants, which are induced by e-commerce, are especially important for the higher wage growth in smaller cities.

We also decompose the change in the price index into three primary channels: price, variety, and the ‘new entrant’ effect. The price channel captures the decrease in prices in varieties originally available in a city, but that become less expensive because of e-commerce. The variety channel captures the increasing access to varieties originally not sold in a city through the offline channel. The ‘new entrant’ effect captures the decrease in price index from new entrants. We find that the variety effect tends to be the most significant source of the price decrease except for the largest cities, in which the price effect is more important.

A top policy priority for many developing countries is to reduce disparity in living standards across locations. Our research points to the importance of reducing differences in the prices and variety of goods, in addition to reducing nominal income differences. Our research suggests that consumers in small and remote locations stand to benefit the most from e-commerce. Thus e-commerce, as a new trade technology, can substantially reduce inequalities in consumer welfare across space.

E-commerce provides developing countries with a unique opportunity to leapfrog the ‘big box’ retailing mode that has been dominant in the developed world since the 1950s. To ensure that developing countries are able to reap the benefits from e-commerce, policymakers should strive to provide modern transportation infrastructure, competitive courier services, and easy access to the internet.

Atkin, D and D Donaldson (2015), “Who's getting globalized? The size and implications of intra-national trade costs”, NBER Working paper No w21439.

Feenstra, R C, M Xu and A Antoniades (2017), “What is the price of tea in China? Towards the relative cost of living in Chinese and US cities”, NBER Working paper No w23161.