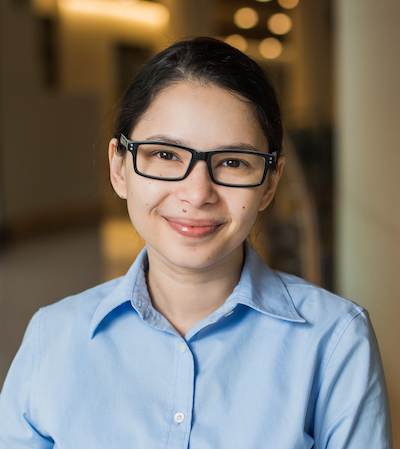 Opening to trade can substantially increase local labour market concentration, but whether local firms exploit this to underpay workers depends on workers’ ability to substitute across versus within labour markets

Recent research has demonstrated that trade liberalisation does not affect local labour markets equally. For example, labour markets whose industries face greater exposure to import competition typically experience negative effects, such as significant wage declines relative to less exposed markets (e.g. see Topalova (2010) for India, Kovak (2013) for Brazil, and Autor et al. (2013) for the US). But what can account for these effects?

In a recent paper (Felix 2022), I revisit Brazil’s 1990s trade liberalisation to empirically examine whether trade-induced increases in firms’ labour market power could account for wage declines in labour markets more exposed to import competition. Specifically, I test whether opening to trade increased local labour market concentration, and if this contributed to increased labour market power for firms thus reducing wages. I focus on the formal sector, for which large and persistent wage declines resulting from trade have been documented (Dix-Carneiro and Kovak 2017), and for which detailed employer-employee linked administrative data are available.

What is the relationship between trade, labour market concentration, and wages?

Therefore, the effect of increased labour market concentration, due to trade, on workers’ wages depends on which of these channels is more powerful.

To understand which channel ‘wins out’, I use a simple framework based on Berger, Herkenhoff and Mongey (2022) that allows me to test whether Brazil’s trade liberalisation increased firms’ labour market power in the local labour markets more exposed to import competition, through its effect on labour market concentration.

In this framework, under certain assumptions on labour supply and labour demand, the effect of a trade shock on a local labour market’s average wage markdown—which is a measure of how much market power local firms possess—can be quantified using two sufficient statistics. The first is the effect of the trade shock on local labour market concentration, and the second is the gap between two key elasticities capturing how workers substitute across different labour markets versus how workers substitute across firms within the same market, as reflected by the choices workers make in Figure 1 below.

In the case of Brazil’s trade liberalisation, both these statistics can be estimated by using employer-employee linked data for all formal sector employment in the context of policy-induced, import tariff reductions. This data allows for an accurate measure of formal sector firm shares in local labour markets, and ensures the analysis of wage data is not confounded by workers’ characteristics (observable or unobservable).

In 1990, Brazil announced an import tariff reduction reform, to be completed by 1994, which would bring import tariffs across all sectors down by a pre-reform average of 33% to a post-reform average of 13%. Figure 2 shows the cross-sector variation in import tariff reductions induced by the reform, showing that reductions were largest for the most protected sectors at baseline, nearly all of which were manufactures of consumer goods (e.g. toys, perfumes, cigars, cars. motorcycles, apparel, etc.). 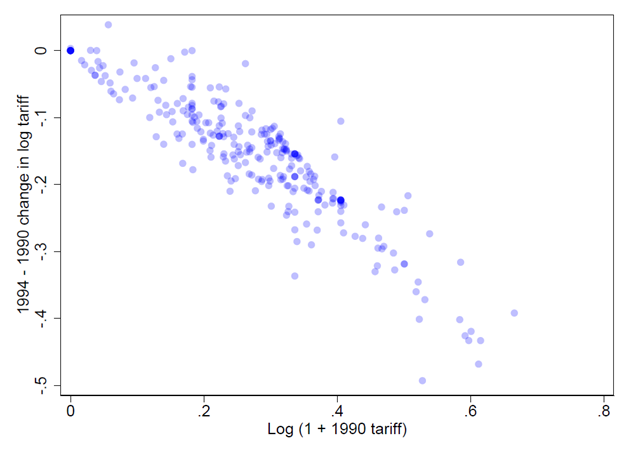 Notes: This figure plots policy-induced import tariff reductions across 285 tradable sector industries (y-axis) against their corresponding baseline level of import tariffs (x-axis). Tariffs are simple averages across the products produced by each sector and are mapped from HS6 product-level tariffs from UNCTAD TRAINS to CNAE sector codes in RAIS using IBGE product to sector mappings.

Figure 3 shows how the cross-sector variation seen in Figure 2 leads to differential changes in import competition exposure (ICE) across the local labour markets for two example groups of occupations. Importantly, this reveals that the spatial incidence of shocks also varied by occupational groups. 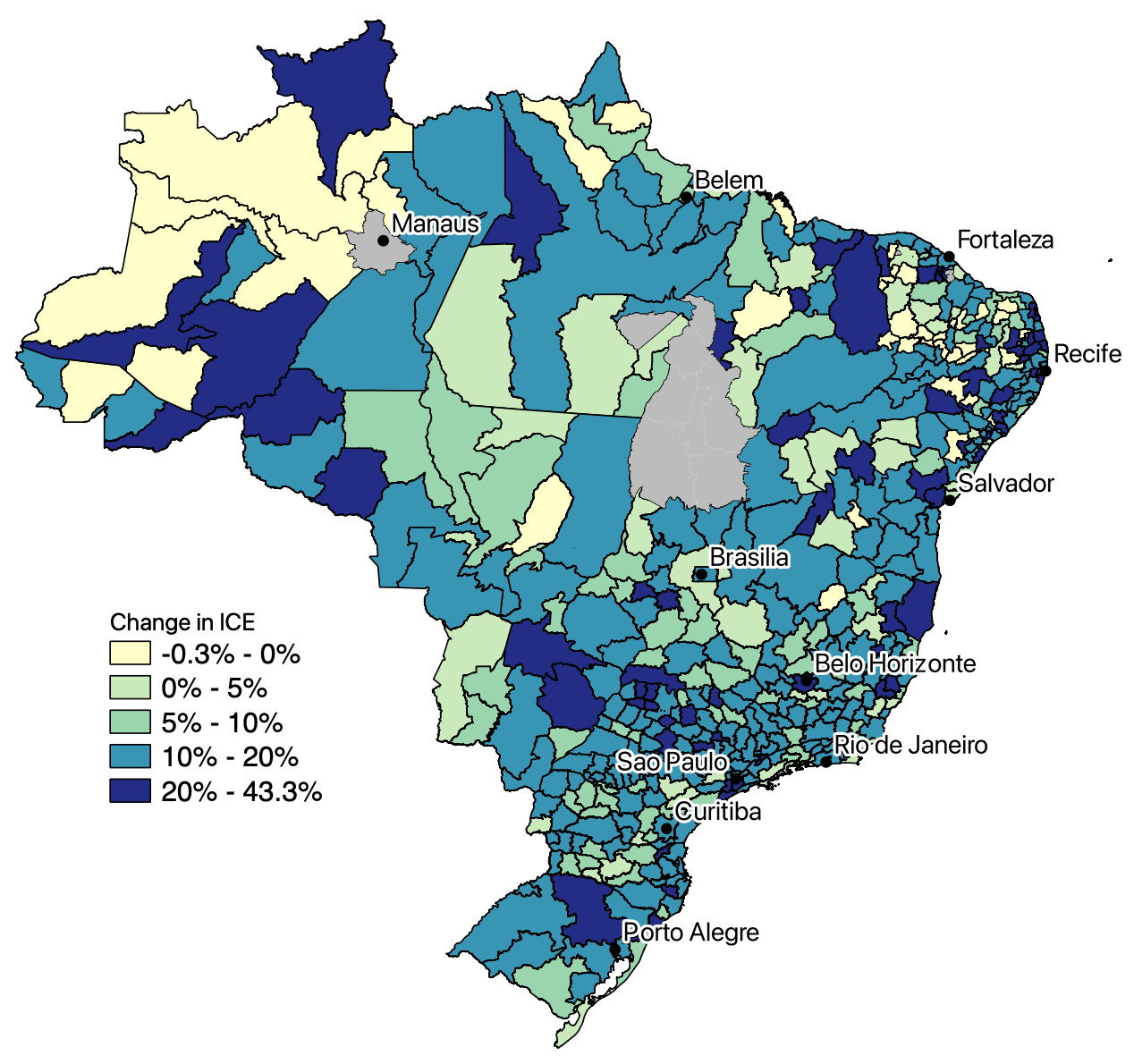 Notes: This figure plots policy-induced changes in Import Competition Exposure across local labour markets. Change in ICE is measured as the weighted-average change in log(1+tariff) faced by tradable sector firms within each local labour market, where weights are proportional to each firm’s contribution to the market’s 1991 level of concentration.

The effect of trade liberalisation on local labour market concentration 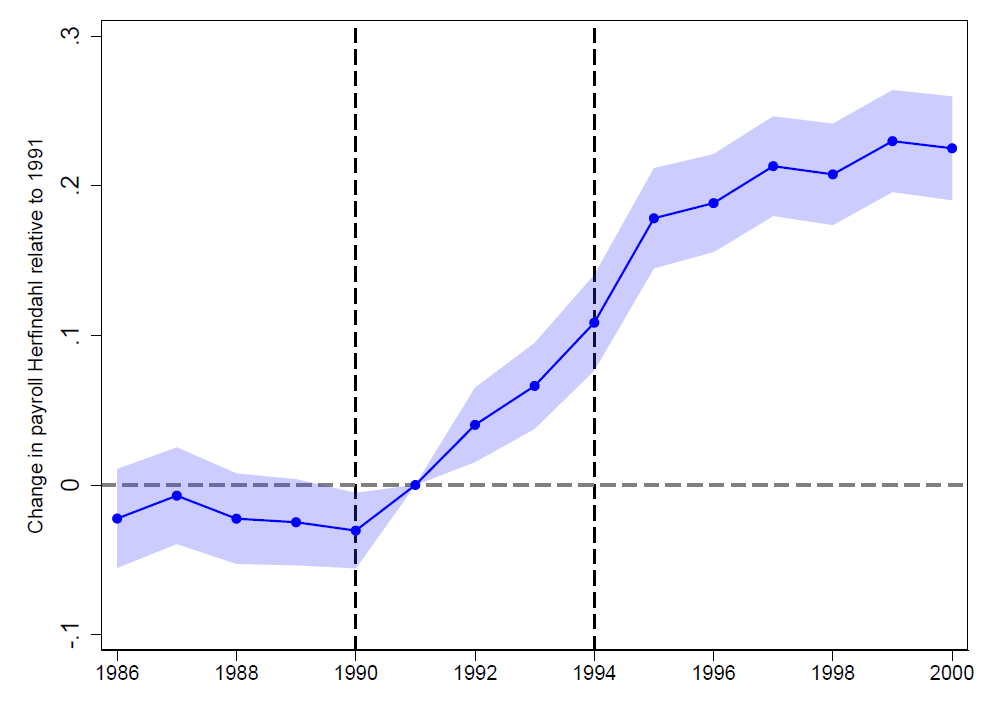 Notes: This figure shows point estimates (blue dots) and 95% confidence intervals (shaded area) from a year-by-year difference-in-differences regression of changes in local labour market concentration (relative to base year of 1991) on the market’s change in import competition exposure. Since ICE is a weighted average of log changes, note that this is a units-on-logs regression. Standard errors are clustered by market.

We can also see why concentration increases by checking how firms are differentially affected within the same market. Consistent with trade theory, Figure 5 shows that non-exporting tradable sector firms either exit or substantially shrink, whereas exporters and non-tradable sector firms are not as affected.

Figure 5: Sources of increased labour market concentration. Left: Import-competing firms exited or shrank; exporters were more likely to survive. Right: At baseline, exporters were 20x larger than all other firms. 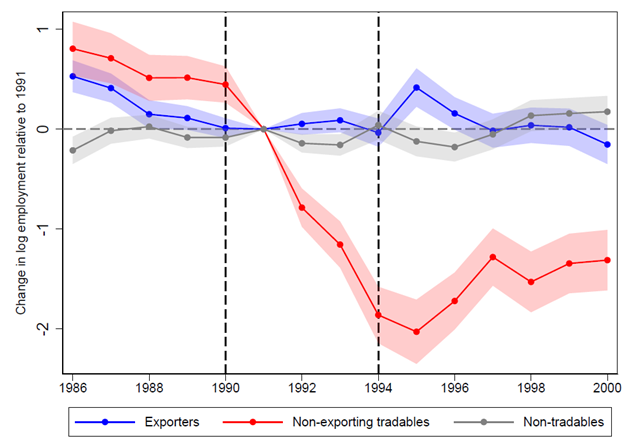 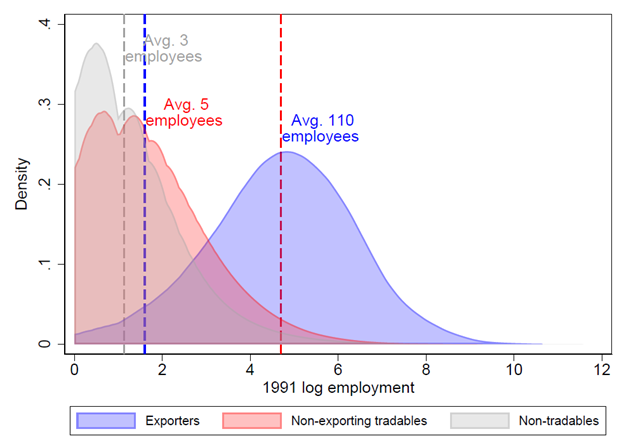 Notes: The left panel shows point estimates and 95% confidence intervals for three separate year-by-year difference-in-differences regressions of changes in log market employment (relative to base year of 1991) among each firm type on the market’s change in import competition exposure. Since ICE is a weighted average of log changes, note that these are units-on-logs regressions. Standard errors are clustered by market. The right panel shows the 1991 distribution of firm total log employment for each firm type.

The changing composition of firms within-markets, as seen in Figure 5, increases concentration in two ways:

As exporters also paid wages three times higher than all other firms, this compositional reallocation raises the average marginal product of labour, thus raising wages, a point to which I will return after explaining the effects on wage markdowns.

So concentration increased… but did this increase market power?

A key insight from the framework outlined earlier is that, for a change in local labour market concentration to affect local firms’ market power, it must be harder for workers to substitute across markets than to substitute across firms within the same market. Figure 1 displays how these elasticities of substitution feature into a worker’s labour supply decision.

To see the intuition for this result, consider the following. When a firm cuts its wage, it might lose workers on two margins: (i) to other firms in the same market; or (ii) to other markets. If the firm is the sole employer in its market, the elasticity governing margin (ii) is key, whereas if the firm is infinitesimally small in its market, the one governing margin (i) is key. More generally, a firm’s ability to underpay its workers depends on both margins and, under certain assumptions, the importance of each margin is given by each firm’s payroll share in its local labour market, whose counterpart for the market-level degree of market power is the local labour market’s payroll Herfindahl-Hirschman index.

It can then be shown that what matters for levels of market power are the levels of these key elasticities of substitution, and the levels of concentration. Whereas for changes in market power, what matters are changes in concentration and the gap between the elasticities. If it is just as easy (or hard) for workers to substitute locally (across firms) than across markets, margins (i) and (ii) are equally desirable, such that changes in a firms’ relative size wouldn’t affect the extent to which workers can be underpaid.

Estimates of elasticities of substitution across versus within markets: Implications for levels and changes in market power

This is a much higher level of firm labour market power than in the US, for which workers are estimated to be paid from 65 to 80 cents on the dollar (e.g., Yeh, Macaluso and Hershbein 2022, Berger, Herkenhoff, and Mongey 2022 and Lamadon, Mogstad and Setzler 2022). Contrasting estimates for the two countries shows that their main difference is that Brazil’s within-market cross-firm elasticity is much more inelastic than the US. In other words: Brazilian workers have a much tougher time substituting to firms within the same market than those in the US do.

In addition, the 0.272 gap between the elasticities in Brazil is very small, meaning that workers find it nearly as hard to substitute across firms within a market than across markets. As a result, while Brazilian firms might command substantial labour market power, the large increases in concentration due to trade shown in Figure 4 did not substantially change that.

The increase in market power reduced wages by 0.29%, which was large enough to offset a 0.27% increase in wages due to the cross-firm compositional reallocation shown in Figure 4, but on net accounted for less than 2% of the 14% negative effect of trade on wages in more exposed local labour markets. Most of the wage decline seems to have been driven instead by within-firm reductions in the marginal revenue product of labour, which could reflect, for example, reduced price markups, losses to worker productivity, or disruptions in firms’ production processes (i.e., production functions). Future research is needed to understand which channel was most important.

Overall, these results offer two key lessons for policy. First, while much attention is paid to the importance of investing in factors that facilitate worker mobility across labour markets (e.g. infrastructure connecting people across space and flexible licensing rules that facilitate occupational switching), the high levels of labour market power estimated in Brazil appear to be driven instead by very inelastic substitution within markets, across firms. This suggests that factors such as local search frictions; imperfect talent signalling and information asymmetry; a loyalty or servitude culture to one’s employer; or within-city transportation costs might be more important in improving labour market efficiency.

Finally, while opening to trade did reduce wages in more exposed Brazilian labour markets, it does not appear that this was driven by these markets becoming more concentrated and inefficient, which is good news. However, this finding need not hold for different contexts, as it depends crucially on the relative ease with which workers are able to substitute across versus within labour markets in response to negative shocks, which is likely to be very context dependent.