By leveraging peer-learning effects, group-based consulting can be cheaper and more effective than individual interventions in improving SME performance

There are large differences in the management practices used by firms within and across countries (Bloom and Van Reenen 2007). These differences are strongly correlated with productivity, with Bloom et al. (2016) estimating that differences in management can account for 30% of cross-country productivity differences. An experiment with 17 textile firms in India provides a proof-of-concept that intensive individualised consulting can deliver lasting improvements in the practices of badly managed firms, resulting in productivity improvements of 17% (Bloom et al. 2013, 2020). However, this intervention was implemented by an international consulting company under close supervision from researchers, and had a market value of US$250,000 per treated firm. Such high costs might be prohibitive for many small and medium-sized enterprises (SMEs) to finance themselves, and also for governments seeking to scale up such interventions to assist large numbers of firms.

In a new paper (Iacovone et al. forthcoming), we partnered with the Colombian government to conduct an experiment to test two competing approaches to scaling up management improvements: individualised consulting services delivered by local consultants, and a group-based approach aimed at lowering the cost of delivery and leveraging group-learning dynamics.

An experiment with auto-parts firms

The government of Colombia chose the auto-parts sector for this programme and launched a call for interested firms in 2012. This sector consists largely of second-tier suppliers to large car manufacturers and producers of spare parts – such as fenders, tires, suspension parts, plastic parts and paints – for the secondary market. Firms were told that the programme aimed to improve production practices and that while it did not require any payment, it needed a commitment of time and effort from their management and workforce. 218 firms applied for the programme, of which 159 were chosen. The firms ranged in size from 10 to 310 employees, with a mean of 59 workers. Most had been operating for many years, with a median firm age of 24 years. Management practices in these firms at the time of application were similar to those of other Colombian manufacturing firms, and to those in Kenya and India, suggesting plenty of room for improvement.

We randomly divided the eligible applicants into a control group and two treatment groups, each of 53 firms:

The individual treatment was delivered between March and November 2014, while due to a government funding delay, the group treatment took place between September 2015 and March 2016. We measured impacts of the programme through detailed measurement of 141 management practices collected during the diagnostic and implementation processes and then one year later, as well as through administrative firm data on employment, sales, production, profits, and labour productivity. The latter enabled us to measure treatment impact for three to four years after the interventions.

Figure 1 shows the trajectory of impacts on management practices for the full set of 141 management practices (called Anexo K after the form used for scoring these), and the scores under the five separate areas of finances, HR, logistics, marketing and sales, and production practices. The control group shows a gradual improvement in practices over time, which we attribute to the diagnostic sessions and our data requests. Both the individual and group treatments sharply improve practices relative to the control group during their implementation phases, and this improvement persists for at least the subsequent year. Both treatments improve management practices by 8–10 percentage points, with the group-based approach doing so at one-third of the cost of the individual treatment. We find that firms within the same small group tend to improve a similar set of management practices, suggesting coordinated learning and experimentation. 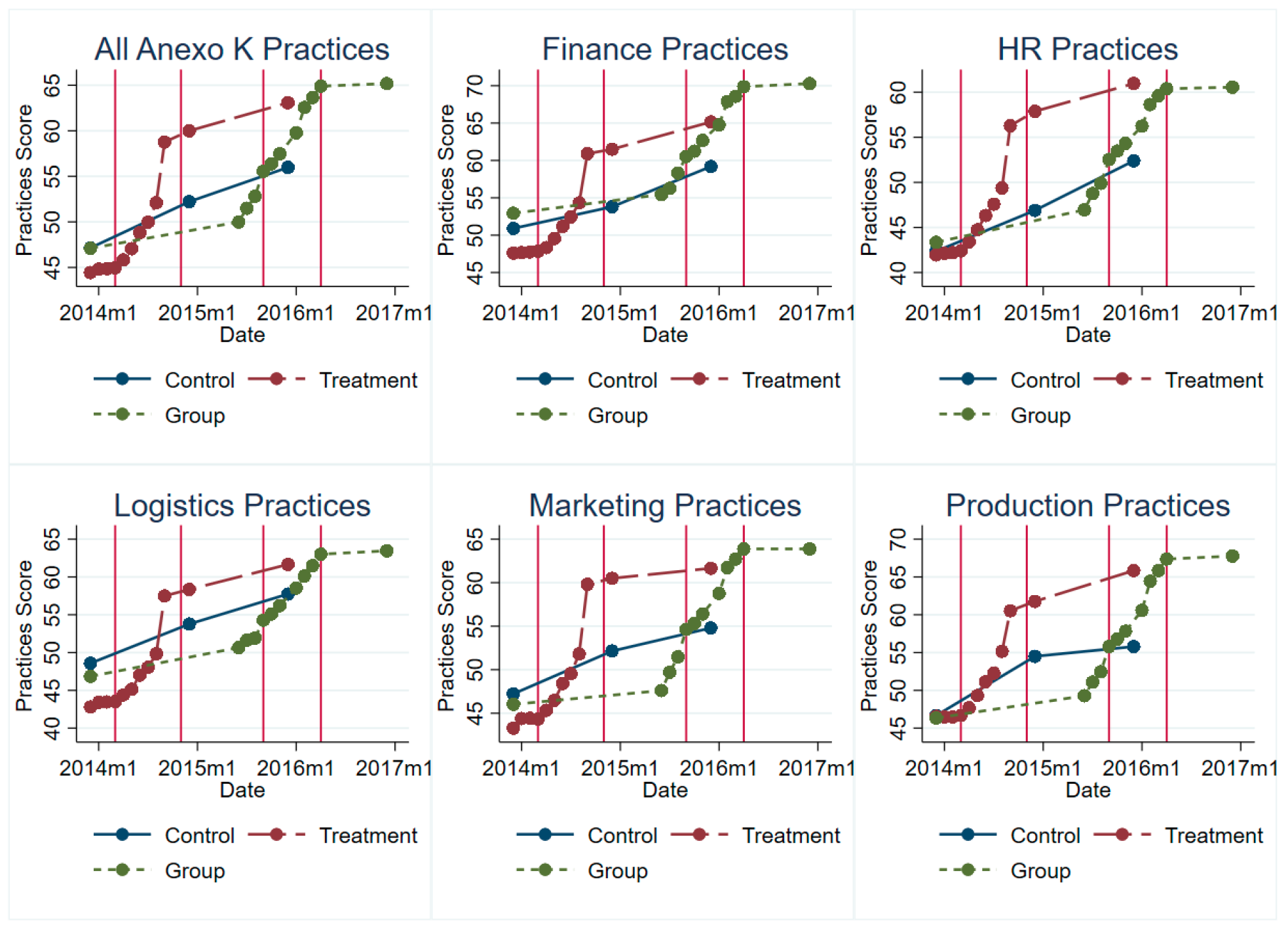 We then link firms to administrative data on employment and to a government annual panel survey to track their performance for three to four years post-implementation. We find that the group-based interventions expand employment of the treated firms with a statistically significant increase of 6–15 workers relative to the control group. They also record a 28–33% growth in sales and production, a 5–26 % increase in profits, and a 43% increase in value-added. Labour productivity also increases by 11–14 percentage points, although this impact is not statistically significant.

The impacts of the individual treatment on firm performance are smaller in magnitude and more sensitive to functional form and sample composition. Employment increased by two to seven workers, and sales increased 5–13%, but this is statistically insignificant. The group-based intervention clearly dominates the individual intervention on a cost-benefit basis.

The group treatment model pioneered here appears to offer a promising approach to scaling management, especially given the relatively limited literature on programmes on improving management in small and medium enterprises (McKenzie et al. 2020). We estimate a mean increase in annual profits from the group treatment of $273,000, with the 95% confidence interval ranging from $17,400 to $528,000. The intervention would then pay for itself within one month of returns at the point estimate, and within one year at the bottom of this confidence interval. Part of its success, independent of cost, appears to arise precisely from the kind of group learning effects highlighted in recent literature (e.g. Cai and Szeidl 2018) that may more than offset the reduced individual attention received from consultants.

While we are able to demonstrate that the group consulting treatment works, our sample size and number of groups prevents us from being able to offer detailed recommendations on the types of firms it could best work for, or on how groups should be optimally formed. Governments looking to help improve management in manufacturing firms should therefore consider this group-based consulting approach, but experiment further to test this idea with more firms and groups. Future research can also attempt to measure other channels through which the group intervention improves firm performance.