The links between capabilities and export dynamics in developing countries 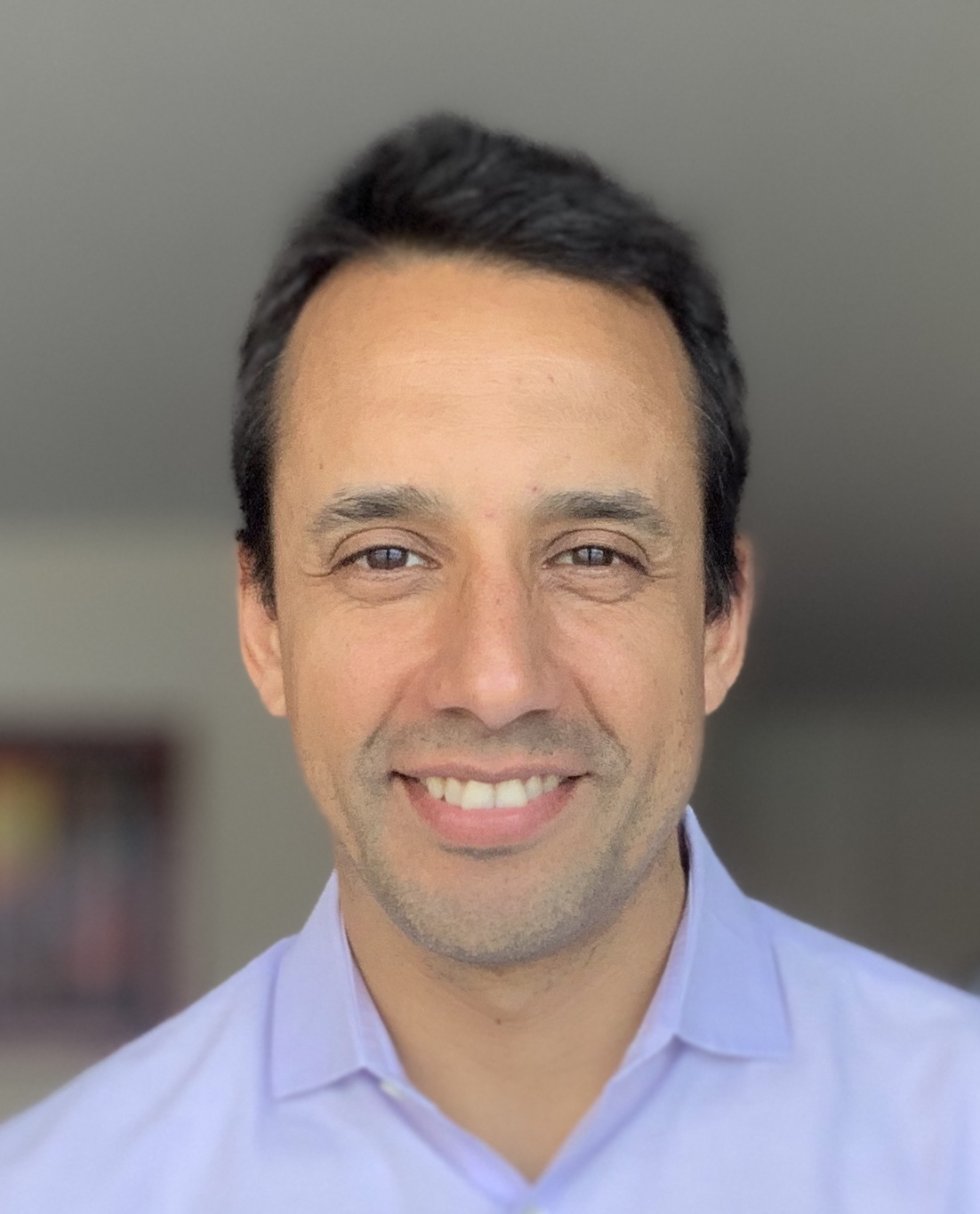 Productive and technological capabilities are an essential engine for export growth, economic growth, and development. Early development pioneers emphasised that the process of absorbing, learning, combining, and creating knowledge drives the transformation of economic structures from agriculture and extractive industries to more sophisticated activities (Hirschman 1958).

Schumpeter underlined the importance of innovation activities and research and development (R&D) investments, while modern growth theories highlighted the role of human capital and, more broadly, knowledge, as a major driver of growth.

Recent experiences from East Asian economies illustrate how the accumulation of capabilities contributed to catching-up in living standards relative to more advanced economies (Cimoli et al. 2009). By contrast, Latin American and African countries have performed poorly, lagging in their technological development and productivity growth (McMillan et al. 2017, Grazzi and Petrobelli 2016). International competitiveness and the development outlook in these regions remain fragile and highly dependent on the fluctuations of commodity prices.

Despite these theoretical and empirical advances, there are still many open questions on how capabilities influence export performance and dynamics across developing countries. For example, the average steel exporter in Turkey is 1.5 times larger than the average steel exporter in Mexico. Bangladesh exporters of apparel and clothing accessories export to more than four destinations on average, while in Pakistan, they export to only two destinations each.

The average Mexican exporter of electrical machinery and equipment exports on average more than six different products, while Thai exporters export only four products. These differences are related to the size of the country, level of development, trade policy, and comparative advantages. What is the role of productive and technological capabilities?

Capabilities in the developing world: Economic complexity and R&D investment

There are several measures that capture distinctive aspects of capabilities across countries. In recent years, the Economic Complexity Index (ECI) has gained prominence to measure productive capacities (Hausman et al. 2011). The ECI measures the multiplicity of productive knowledge embedded in an economy by combining information on the diversity of a country’s exports and the ubiquity of its products.

Technological capabilities are traditionally proxied by R&D investments, which reflect the level of effort that countries spend to foster knowledge creation and absorption. In fact, a firm’s R&D activities not only encourage product and process innovations, but also enhance their capacity to assimilate external knowledge.

For example, Mexico displays a relatively high ECI as its export structure is relatively diversified, with a large share of medium-high and high-technology products, as a result of the significant presence of transnational firms. However, technological efforts are limited, with relatively low levels of R&D investments, illustrating the weaknesses in its national innovation system.

By contrast, Kenya exhibits a relatively low level of ECI, as its export structure is highly concentrated in a few agricultural products and textiles. Yet, Kenya has strengthened its efforts to increase R&D investments to about 0.8% of GDP, which is a relatively high figure for a developing country.

Meanwhile, China shows a robust performance regarding both indicators, with an export structure composed by a large share of high-technology products and R&D investments (about 2% of GDP), the highest among developing countries. 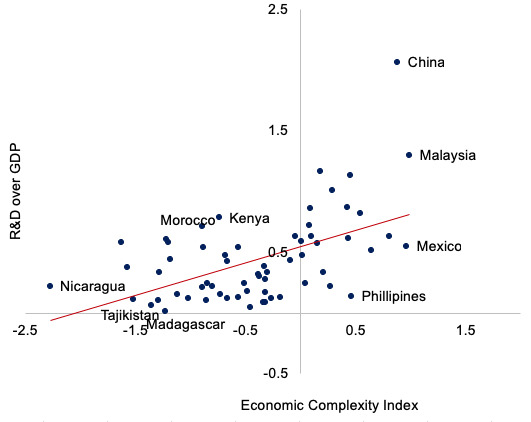 Source: Author’s own elaboration based on data from the World Development Indicators (WDI) and Massachusetts Institute of Technology (MIT) Observatory on Economic Complexity. Data is for 2015 or latest available year.

Figure 2 display the plots for ECI and R&D investments against the level of development. As expected, both are positively correlated with GDP per capita, but countries’ specific situations greatly differ. For example, countries such as Kuwait, Qatar, and Chile exhibit a low level of ECI, despite a relatively high level of GDP per capita.

Meanwhile, relatively poor countries tend to invest little in R&D, but there are also a variety of country specific circumstances. Countries like Colombia and some Arab States of the Persian Gulf display a relatively high GDP per capita among developing countries, but they underperform regarding R&D investments.

Figure 2 Capabilities and level of development 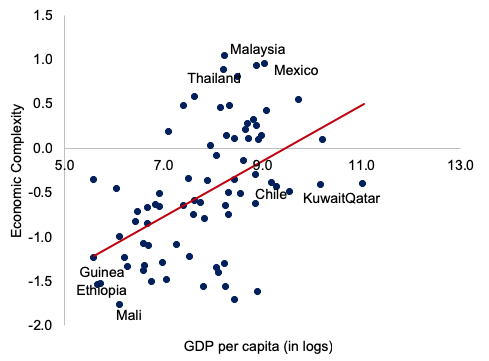 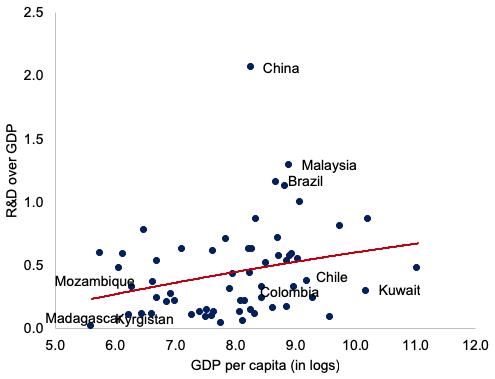 Source: Author’s own elaboration based on data from World Development Indicators (WDI), World Bank, and the MIT’s Observatory of Economic Complexity. Accessible: https://atlas.media.mit.edu/en/. Data is for 2015 or latest available year.

The findings: Capabilities and export dynamics

In analysing the role of productive and technological capabilities on export dynamics in developing countries, I exploit a country-sector-year database (Vergara 2018), which contains exporter-level statistical information (Fernandes et al. 2016). The objective is to link productive and technological capabilities – proxied by the ECI and R&D investments, respectively – with several merchandise export dimensions.

Interestingly, productive and technological capabilities are strongly connected to several export dimensions, even after controlling for level of development, trade openness, the size of the manufacturing sector, and commodity dependency. Countries with higher productive capacities have more exporters, in total and per product, and their exporters are larger. Also, these exporters charge higher prices for their products, which suggest a higher quality of their export products.

Finally, technological capabilities play a specific role in high-technology sectors, such as electronics, electrical machinery and equipment, and pharmaceuticals. In these sectors, exporters from countries with more R&D investments are more diversified in term of destination markets.

Author’s note: I am grateful to Helena Afonso for excellent comments and suggestions. The views expressed in this column are those of the author and do not necessarily reflect those of the United Nations.

McMillan, M, Rodrik, D and Verduzco-Gallo, I (2017). “Globalization, Structural Change, and Productivity Growth, with an Update on Africa”, World Development 63: 11-32.