Low-income countries are more integrated into the global economy than ever. But most workers in these countries work in small, informal microenterprises that are less productive than their formal counterparts (La Porta and Shleifer 2014). Can expanding exports help these workers and aid economic development? Our research (McCaig and Pavcnik forthcoming) finds that lowering barriers to exports induces individuals to move from working in informal microenterprises to wage work in larger, formal establishments in Vietnam. This movement out of the informal sector to the formal one contributes to economic development by increasing aggregate labour productivity. It also changes the way a worker is attached to the labour force and may improve worker welfare, as formal firms pay higher wages.

Vietnam experienced a large decline in the cost of exporting to the US in 2001 as a result of  the US-Vietnam Bilateral Trade Agreement (BTA). US goods entering Vietnam already faced relatively low import tariffs, so the primary policy change in the immediate aftermath was a reduction in tariffs imposed on Vietnamese exports entering the US, which fell on average from 23.4% to 2.4%. This decline in US tariffs was associated with a rapid growth of exports to the US, from $1.1 billion in 2001 to $5.0 billion in 2004, predominantly driven by manufacturing (see Figure 1). Industries with larger tariff cuts experienced more rapid export growth.

It is possible, though, that other changes were occurring simultaneously that could have caused the export growth. The agreement had several features that help us identify the effect of exporting on the allocation of workers. In particular, tariff reductions differed across industries in ways unrelated to existing industry-specific conditions in Vietnam. And industries with larger tariff reductions experienced more rapid export growth. Our study focuses on whether these industries also saw a greater reduction in informal work relative to industries with smaller tariff cuts.

Figure 1 Growth in Vietnamese exports to the US 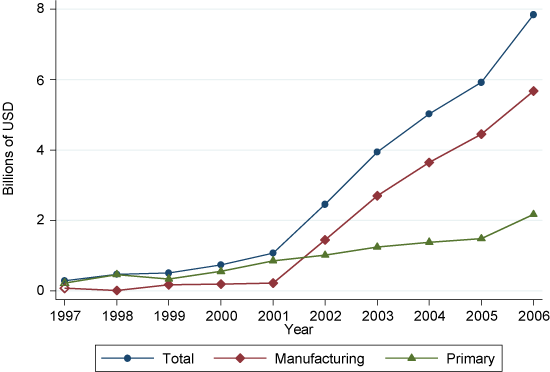 Declines in tariffs on exports are predicted to increase product demand, thereby increasing labour demand and wages. Indeed, the BTA increased wages in areas of Vietnam with a greater concentration of industries with large tariff cuts prior to the agreement (McCaig 2011, Fukase 2013). But not all firms are expected to be affected equally. Lower tariffs disproportionally benefit firms that are more productive (or have lower marginal costs) within an industry, as they observe a rise in revenue from exporting that is large enough to outweigh the fixed costs of exporting. Higher wages, on the other hand, induce less productive firms to contract or exit. In addition, Lucas (1978)-style models, such as Gollin (2008), predict a reallocation of individuals from self-employment towards wage work in firms run by managers with greater managerial talent as the aggregate wage rises. This induces the reallocation of workers from informal microenterprises to larger, more productive firms.

We examine these predictions for worker reallocation across employers using nationally representative household surveys that identify a worker’s industry and employer type. This allows us to observe employment in the entire size distribution of firms and to track the allocation of employment across a firm margin in a way that is often not observed in conventional, firm-level datasets. At the onset of the BTA, 85% of workers overall and 66% of workers in manufacturing worked in informal microenterprises. The percentage in manufacturing dropped to 60% over the next two years.

Importantly, Vietnamese industries that experienced bigger drops in US tariffs also had the biggest increase in the share of workers in formal businesses. This reallocation of workers was not driven by informal microenterprises formalising, but by existing formal firms expanding and new firms entering directly into the formal sector. Within manufacturing, where the tariff cuts and export growth were largest, the BTA reallocated almost 5% of workers (around 204,000 workers) to formal firms in the two years after the agreement. As our estimates focus on a relatively short period after the agreement, they likely underestimate the long-term movement of labour out of the informal sector.

Reinforcing the notion that the reallocation was driven by BTA-induced exports, we find greater reallocation for workers living in provinces that are more internationally integrated (as measured by the distance to a deep seaport) and for younger cohorts. These are the workers that would be more directly exposed and more mobile, making them more able to benefit from new export opportunities.

Implications for labour productivity and workers

Our study highlights the importance of capturing interactions between the formal sector and informal microenterprises through the general equilibrium effects of a trade policy change. These effects would be missed if these two sectors were to be studied in isolation.

To improve jobs and lives for workers in low-income countries, improving microenterprise performance and promoting formalisation has been a high priority. A large literature examines these supply-side policies, including the provision of credit, easing barriers to business registration, and training of business owners (Banerjee 2013, Banerjee et al. 2015, Bruhn and McKenzie 2014, McKenzie and Woodruff 2014). While these studies generally find positive effects, they tend to be modest, with few firms transitioning to sustained rapid growth. Our study complements this literature, showing that an output-market (i.e. product demand-side) policy change that disproportionally benefits and expands better performing firms shifts the composition of jobs away from informal microenterprises towards the formal sector.

The reduction in US tariffs on Vietnamese exports disproportionately benefitted larger, more productive firms, and the associated movement of workers from informal to formal firms increased aggregate labour productivity within manufacturing by between 1.5% and 2.8% annually. This is entirely due to workers moving from informal to formal firms. However, the effect is not as large you might expect given the size of the raw labour productivity gap between formal and informal firms and the magnitude of worker reallocation. The raw labour productivity gap in part reflects differences between the two sectors in terms of worker human capital and hours worked, measurement error in revenue and hours worked, and labour intensity of production. Nonetheless, the reallocation certainly increased labour productivity within manufacturing.

There is good reason to expect that this reallocation benefited workers. Workers in the formal sector work longer and more regular/stable hours, earn higher wages, and are more likely to receive benefits. Moreover, their employers are legally required to make social insurance contributions on their behalf. Banerjee and Duflo (2008) argue that access to a stable job is an important component of the middle classes in emerging economies. More work remains to be done to examine directly whether and how workers benefitted from the productivity gains and to assess the welfare consequences.