Opinion: The case for tradable growth 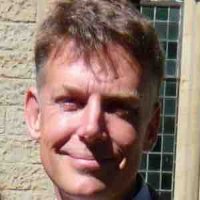 Nick Lea, Deputy Chief Economist of DfID, makes a strong case for why tradable growth is essential for developing countries

Fostering tradable growth often involves working on complex constraints, such as connectivity or efficiency of the finance sector. Regrettably, however, it is common for both governments and donors to make little distinction between tradable and non-tradable growth, and, as a result, they are often tempted to settle for the easier strategy of encouraging production for tiny, protected domestic markets. This is a mistake. Wherever possible, it is better to grasp the nettle and prioritise the foundations and establishment of high, sustained tradable growth.

While many episodes of tradable growth are far too short-lived (such as those driven by natural resource booms), in this column I argue that we should view sustained tradable growth as the central mechanism of convergence to OECD incomes.

The pace and sustainability of tradable growth

Tradables are important for developing countries because they have the potential to grow very quickly over a long period. Sustained and quick tradable growth is possible through export expansion by tapping into deep global markets so that exports produced domestically can progressively expand at global prices.1 Remarkably, some countries have been able to sustain an export expansion of nearly 20% per year for over 20 years.2 It would be inconceivable for any sector to expand at this pace for this long, driven only by demand from a closed national market. Firms must either be able to increase supply and raise productivity, or discover new products that push out the aggregate supply curve. Except in a few rare cases, natural resource-based growth has failed to provide this long-term expansion. Supply is constrained by resource finds, opportunities for productivity growth are relatively limited, and volatile global commodity prices create difficulties in macroeconomic management that are currently all too visible in Africa and Latin America.

The relationship between foreign exchange, tradables and overall growth

A lack of growth in tradables constrains the foreign exchange market and hence, overall growth. Over the long term, tradables are the primary net source of foreign exchange,3 both because they directly earn it through exports and because they substitute for it by reducing demand for imports. As has been known for decades,4 when the supply of foreign exchange cannot expand, then growth in any sector dependent on imports is liable to create its own frictions, as rising import demand bids up imports prices via the real exchange rate.

This effect of constrained foreign exchange can be seen in the cross-country data over the medium term. As a proxy for the foreign exchange from tradables, Figure 1 plots the annualised growth in US dollar export earnings against annualised growth in real GDP per capita over 15-year time periods for low-income countries (LICs) and lower-middle-income countries (LMICs) since 1980.5 While there is only a loose association between export earnings and income growth over the short term, an extremely strong relationship emerges over the longer term. Across 10-year or 15-year time periods, there is an important correlation between growth in nominal US dollar export earnings and growth in real GDP per capita consistent with the critical role of foreign exchange in growth. In fact, since 1980, every LIC or LMIC country that achieved income growth of over 7% over a 15-year period also experienced export growth of over 10% in that period; and no country experienced any period of positive per capita growth without also experiencing positive export growth. Like most growth regressions, causality is likely to flow both ways, yet we can say definitively that there is a dearth of country examples that have achieved high growth in real incomes without also achieving high nominal export growth.6

Figure 1 Growth in exports versus GDP/cap 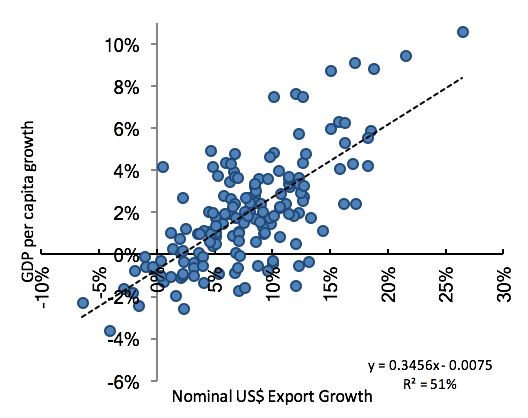 Similarly, other things being held constant, a positive foreign exchange shock creates a general stimulus across the economy through falls in the domestic price of imports.7 This translates into higher import volumes and, importantly, growth in the import logistics service chain (transport, wholesale and retail). Furthermore, if the foreign exchange was generated by tradable firms which are usually easier to tax than their non-tradable counterparts (being formal and larger), it creates additional multipliers through public sector salaries and public investment. Hence, tradable growth usually translates rapidly and easily into a general stimulus of the non-tradable sector through higher import-related business and higher government spending. Figure 2 illustrates this effect, and plots nominal growth in exports against nominal growth in the rest of the economy over the medium term.8 We can see that there is a clear association illustrating the multiplier effects of a foreign exchange boom. A 1% increase in the dollar value of exports is accompanied by a 0.4% growth in the dollar value of non-export GDP. This pattern of growth describes a primary dynamic of most African economies during the 2003-2013 phase of the commodity cycle.[9]  Hence, just as a shortage of foreign exchange slows growth, so does an increase in foreign exchange stimulate it.

Figure 2 Growth in exports versus non-exports 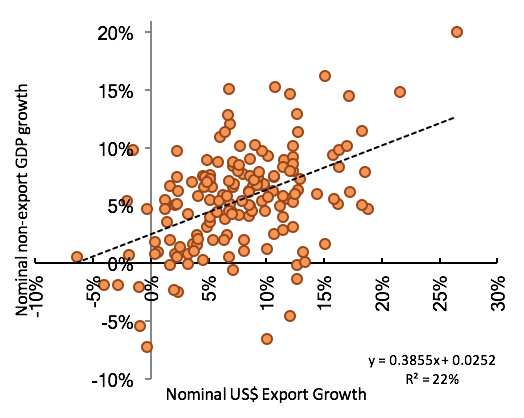 Surprisingly, the implicit assumption of much mainstream macroeconomics is that there is nothing special about tradables. Most growth theory is based on closed economy models, and hence no distinction is made between tradables and non-tradables. Even in open economy models, the implicit assumption is that labour and capital will move freely between tradable and non-tradable sectors regulated by the exchange rate. The exchange rate is viewed to control tradable growth in much the same way as other prices correct for the under-supply of any other good in the economy. In other words, if the economy needs foreign exchange, labour and capital will move into exports, so there is nothing qualitatively different about tradable growth.

While this may be a reasonable assumption for open high-income economies, in practice it is far from reasonable for most developing countries. Developing economies tend to have a deep asymmetry in how they respond to the exchange rate. As we have already seen, appreciation tends to provide a rapid short-term stimulus through multiple channels: cheaper imports, import-related service growth, and increased taxation creates multipliers dependent on the pattern of state expenditure. Conversely, an exchange rate depreciation tends to give rise to a much weaker and slower response from the tradable sector. Developing country experience over the last forty years has demonstrated that sustained tradable growth has been much harder to create than its non-tradable counterpart.

Tradable growth is hindered by several barriers and policy failures which go some way in explaining this asymmetry. While it is comparatively easy for low-productivity firms to operate in real estate, construction, transport or banking providing that there is sufficient domestic demand, tradable growth enjoys potentially much larger markets but faces much larger obstacles. It faces at least five significant barriers:

Since there is no fast growth without tradable growth, and this growth is hindered by particular barriers, wherever practicable, developing country governments and donors should prioritise the development of a diversified tradable sector, should work to overcome the failures which prevent the emergence of viable tradable production, should and support the adoption of a growth path which allows for multiple future upgrades in product set and production techniques.

Sometimes the constraints to tradable growth will themselves be non-tradable such as public infrastructure, domestic food production or transport services.11 Hence the actions which foster tradable growth in a given country will be highly context specific. The international community should support careful diagnosis of these constraints. Donors can also contribute through brokering links with international buyers and investors, and their contribution to trade policy in developed markets. Lastly, for some of the poorest countries where there is little immediate prospect of tradable growth due to fragility or excessive commodity dominance, international actors could usefully focus on its foundations such as the extractive supply chain, economic infrastructure, or the strengthening of core public systems.

[1] That is, that a country’s supply curve for domestic value added in exports can progressively move outwards.

[3] Aid and remittances are substantial for low-income economies but there is very limited capacity for these to increase. Foreign borrowing through debt or portfolio flows is also significant, but must be repaid from future foreign exchange earnings.

[4] This argument that a constraint in one part of the economy raises prices in another is not limited to foreign exchange, and was a key component of Latin American ‘structuralism’ (Campos 1961).

[5] All countries that were LICs or LMICs in 2000 excluding small countries with populations of less than one million.

[6] The exception is Tajikistan, which achieved 4.2% average income growth 1995-2010 with only 0.5% growth in US dollar exports. However, this was an adjustment recovery following the deep economic collapse after independence in 1991.

[7] Put another way, any growth in tradables relative to the rest of the economy puts upward pressure on the real exchange rate, and stimulates the growth of non-tradables by lowering the domestic price of imported inputs.

[8] For countries that were LICs or LMICs in 2000 with populations over one million, the figure plots annualised US dollar export growth against annualised growth in US$ GDP less exports. A better, but not yet available, indicator would be the domestic value-added content of exports which deducts the cost of imported inputs. Hence this regression understates the domestic multiplier by including the imported component of exports.

[9] Many interpreted it as a new kind of structural transformation as resources moved from agriculture towards services and bypassed the traditional stage of industry. Infamously hailed as “Africa rising” by the Economist in 2011, most of the dynamism was driven simply by rising commodity prices and by a relatively modest export supply response.

[11] For a discussion of the role of non-tradable constraints to tradable growth, see Adam and Bevan (2006) or Gollin and Rogerson (2010).