Should low-income countries open up to foreign capital? The India experiment

While foreign capital has long been promoted by international institutions as a driver of economic development, foreign capital liberalisation has become more controversial in the past 15 years. Critics argue that greater exposure to foreign capital fosters financial and economic instability by exposing countries to a ‘flight to quality’ (e.g. Stigliz 2002), by constraining the sovereignty of the government (Rodrik 2011), and by tightening credit constraints as foreign lenders are less able to understand the economic context of developing countries and impede economic growth (e.g. Prasad et al. 2007).

At the same time, it is widely accepted that dysfunctional domestic capital markets may be an important hurdle to development. In addition to being scarce, capital can be misallocated because domestic capital providers (banks in particular) are constrained for historical, political, regulatory, or institutional reasons (e.g. Barnerjee and Munshi 2004, Cole 2009).

Reflecting this fact, Anne Krueger, who was Deputy Managing Director of the IMF during the 2000s, wrote that in India, “[b]anks are considered to be very high cost and inefficiently run”, and that “enabling [Indian banks] to allocate credit to the most productive users, rather than by government allocation, would make a considerable contribution to the Indian economy's growth potential” (Krueger 2002).

The study: Foreign capital liberalisation and firm growth in India

In a recent working paper (Bau and Matray 2019), we leverage an unusual policy that took place in India in the early 2000s in combination with detailed firm balance sheet microdata to provide new evidence on the effects of foreign capital liberalisation on capital misallocation and firm growth.

In 2001 and 2006, India introduced the automatic approval of foreign direct investments of up to 51% of domestic firms’ equity to industries in which foreign investment was initially restricted, potentially reducing capital market frictions. The staggered introduction of the policy across industries and over time allows us to compare the changes in the outcomes of firms in industries that did and did not liberalise and estimate the effects of foreign capital liberalisation on the growth of firms facing the highest constraints on their access to capital.

To measure the effects of foreign capital liberalisation, we combine this policy experiment with firm-level data from Prowess, compiled by the Centre for Monitoring the Indian Economy (CMIE). The dataset contains information from the income statements and balance sheets of companies comprising more than 70% of the economic activity in the organised industrial sector of India. Thus, it is representative of large and medium-sized Indian firms.

To estimate the effect of opening-up to foreign investment on capital allocation, we first determine whether a firm is ex-ante capital-constrained by ranking firms based on their pre-reform marginal revenue return to capital (MRPK). MRPK is the measure of the effect of an additional dollar of capital on revenue. It is often used to measure the degree of the capital constraints faced by a firm since firms should invest as long as they can obtain returns from the investment that are greater than their costs of capital. A firm that is ‘stuck’ with a large return on investment is likely to be prevented from growing because it faces a high cost of capital, leading to misallocation.

As a result of the liberalisation policies, we find that capital-constrained firms (those with MRPKs above the median in their disaggregated industry) differentially expanded their assets by 60%, spent more on labour (+24%), and increased their revenue by 18%. Overall, the MRPKs of capital-constrained firms fell by 45%. This indicates that the cost of capital fell for firms with initially high costs of capital and indicates that capital misallocation also fell. In contrast, firms that we identify as non-capital constrained in the deregulated industries did not expand relative to similar firms in non-deregulated industries.

One natural concern is that these results are driven by changes in misallocation over time that would have happened anyway, without the reforms. To evaluate if this is the case, we examine whether the timing of the increase in capital for constrained firms and the decrease in MRPK lines up with the timing of the reforms.

We find no evidence that capital increased and MRPK decreased for initially high MRPK firms in liberalised industries prior to the reform. In contrast, exactly following the reform episodes, there is a progressive and continuous increase in physical capital (Figure 1). This lack of pre-reform correlation is reassuring, as it suggests that our results are not biased by time trends, while the progressive increase in capital post reform implies that reforms such as the opening-up to foreign investors can take time (several years) to bear fruit. 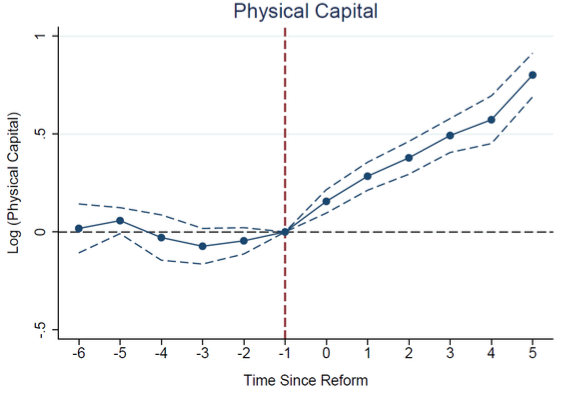 Notes: This figure plots the yearly coefficient capturing the differential effect of capital liberalisation on ex-ante capital-constrained firms from a difference-in-differences estimator, where the dependent variable is the natural logarithm of the total of firm property, plant, and equipment. “0” is normalised to be the first year an industry opens up to foreign capital.

To answer this question, we also explore heterogeneity in the policy’s effects based on the degree of development of local banking markets prior to the reforms. Since India is a federal country, with much of the regulation of its banks and bankruptcy procedure decentralised at the state level, we can exploit the vast geographic disparities in how easily firms can access bank credit.

We find that local capital markets play an important role in determining the policy’s effects. When we compare firms located in states at the first quartile of the domestic financial development distribution with firms located in states in the top quartile, we find that the effect of opening-up to foreign investment on capital constrained firms’ capital is 50% greater.

Faster growth by more capital-constrained firms already suggests that the economy and consumers as a whole benefit from the reform. Yet, it could be the case that the most efficient firms actually gain market power, leading to higher mark-ups. To evaluate whether this is the case, we leverage a unique feature of the Prowess dataset, which also collects information about prices and quantities sold at the firm-product-year level.

We find that following the liberalisation, capital constrained firms not only produce more in quantity, but also offer products at a cheaper price, implying that gains from reduced costs in accessing capital are passed on to consumers.

Capital misallocation can be an important hurdle for development. By preventing the firms with the highest returns from growing, it reduces the quantity produced, increases the prices consumers face, and reduces the wage bill. If changing the local banking market is complicated because of bureaucracy or political capture, governments have a powerful lever that can be used to reduce misallocation: Increasing access to foreign capital for domestic firms.

Rodrik, D (2011), The Globalization Paradox: Democracy and the Future of the World Economy, W.W. Norton.