Trade and inequality: From theory to estimation

Professor of Economics, Department of Economics at the University of California San Diego

Until recently, research on the labour market effects of international trade has been heavily influenced by traditional theories such as the Heckscher-Ohlin and specific factors models, which provide predictions about relative wages across skill groups, occupations, and sectors. In contrast to the predictions of these theories, empirical studies find increased wage inequality in both developed and developing countries, growing residual wage dispersion among workers with similar observed characteristics, and increased wage dispersion across plants and firms within sectors. In a large part due to this disconnect, previous studies have concluded that the contribution of international trade to growing wage inequality is modest at best (see, for example, the survey by Goldberg and Pavcnik 2007).

In a recent paper, we argue that these apparently discordant empirical findings are in fact consistent with a trade-based explanation for wage inequality, but one rooted in recent models of firm heterogeneity and trade (Helpman et al. 2017). We begin by documenting a number of stylised facts about the level and growth of wage inequality in Brazil that provide support for these recent theories.

Motivated by these findings, we develop and estimate a structural econometric model of firms’ export decisions, employment and wages, which is based on an augmented version of the theoretical framework of Helpman et al. (2010). In this augmented theoretical framework, firms are heterogeneous in productivity, choose whether to incur fixed and variable costs of exporting, and face frictions in both matching with workers and screening them for their unobserved abilities. More productive firms are larger in terms of revenue, employ workforces of higher average ability, and hence pay higher wages. Only firms with a sufficiently high productivity find it profitable to export, because only these firms have sufficiently high export sales to cover the fixed costs of exporting. As well as allowing for differences in productivity across firms, we also incorporate heterogeneity in the fixed exporting cost and the efficiency of human resource management (the costs of screening workers) to vary across firms. Heterogeneity in fixed exporting costs allows some small low-wage firms to export and some large high-wage firms to serve only the domestic market. Heterogeneity in the costs of screening workers generates variation in wages across firms after controlling for their employment size and export status, as observed in the data.

The model emphasises two sources of wages difference between exporters and non-exporters.

We estimate the separate contributions of these two different mechanisms using the structure of our model and three different identification approaches.

Across all three identification approaches, we find similar and sizable effects of trade on wage inequality through the mechanism of firm selection into export markets. In Figure 1, we illustrate these counterfactual predictions of our model by graphing the percentage increase in wage inequality (as measured by the standard deviation of log wage) relative to the closed economy against the share of workers employed by exporters (which equals zero in the closed economy). The dashed line varies fixed exporting costs from high values at which no firm exports to low values at which all firms export (holding all other parameters constant at our baseline estimates). The solid line varies variable trade costs analogously (again holding other parameters constant). Using our baseline parameter estimates for the year 1994 (as shown by the blue circle in Figure 1), we estimate that opening the closed economy to trade leads to around a 7.6% increase in the standard deviation of log worker wages.

Figure 1 Wage inequality and share of workers employed by exporters 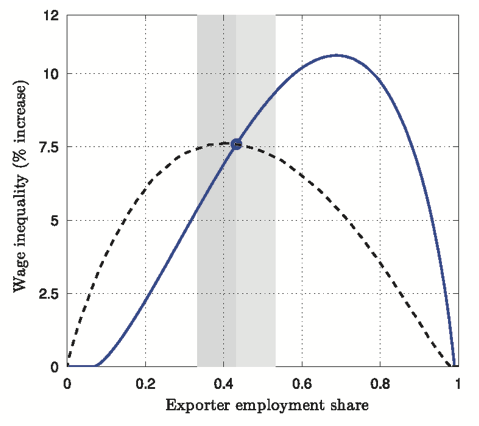 The relationship between wage inequality and trade openness

As also shown in the figure, a key implication of our framework is an inverted U-shape relationship between wage inequality and trade openness. Starting from the closed economy, reductions in trade costs necessarily increase wage inequality. But as trade costs continue to fall, wage inequality reaches a peak and starts to fall back. The reason is the difference in wages between exporters and non-exporters, which is only present when some but not all ﬁrms export. When no ﬁrm exports, a small reduction in trade costs increases wage inequality, because it induces some ﬁrms to export and raises the wages paid by these exporting ﬁrms relative to domestic ﬁrms. When all ﬁrms export, a small rise in trade costs increases wage inequality, because it induces some ﬁrms to cease exporting and reduces the wages paid by these domestic ﬁrms relative to exporting ﬁrms. Our baseline estimates for 1994 (shown by the blue dot) correspond to peak of inequality with respect to the fixed exporting costs (dashed line), because at this level of trade openness almost half of the Brazilian manufacturing labour force is employed by exporters, and hence further increases in trade participation make the distribution of wages more equal.