Arsenic in tubewell water, a public health emergency in Bangladesh 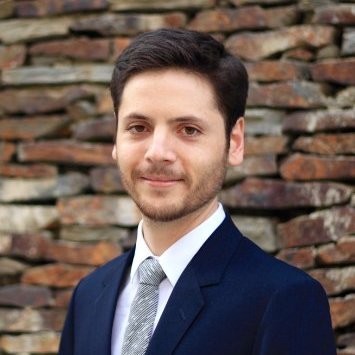 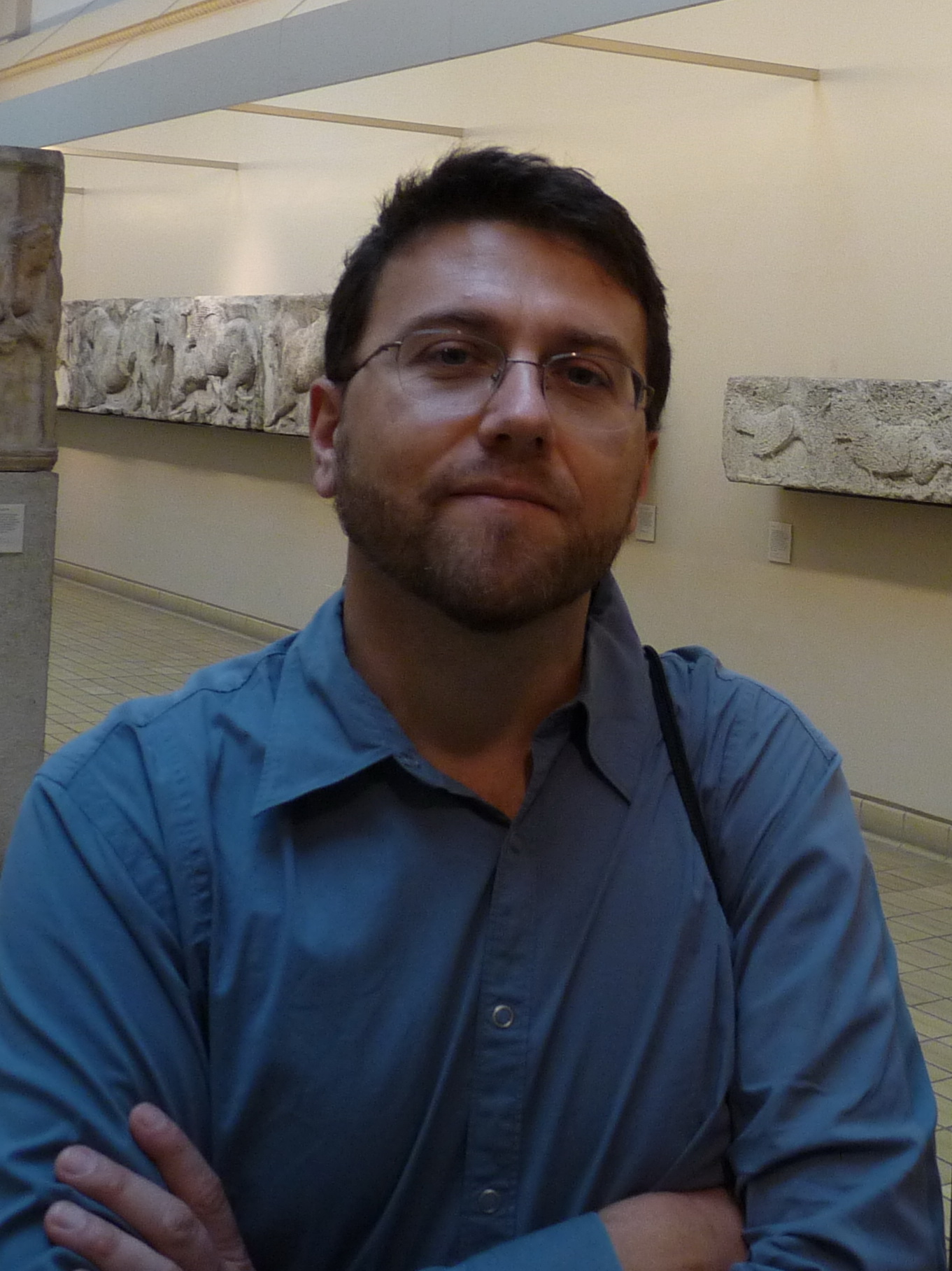 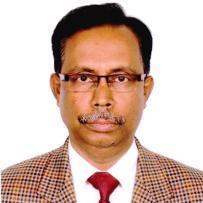 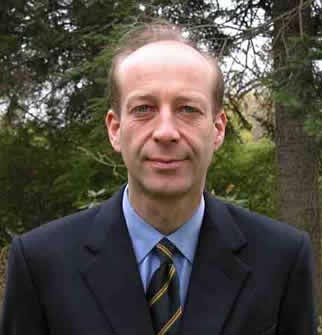 Poor health is unfortunately a common feature of life in less developed countries, with multiple causes that include poor availability and high cost of efficacious health care, insufficient investment in prevention, and reliance on ineffective and yet expensive treatments (Dupas and Miguel 2016, Tarozzi 2016). Another important factor is often poor knowledge about health risks and health-avoiding behaviour.

An emergency in Bangladesh

A tragic example is Bangladesh, where a public health emergency is still unfolding due to the widespread presence of low-level, naturally occurring arsenic in tubewell water, which is the primary source of drinking water for millions of households in rural areas. Flanagan et al. (2012) estimated that almost one-third of a population of more than 150 million people was exposed to arsenic levels above the World Health Organisation (WHO) standard of 10 micro-grams per litre, generating what has been labelled “the largest mass poisoning of a population in history” (Smith et al. 2001). Chronic exposure arsenic at levels encountered in tubewell water is dangerous, and epidemiological studies in Bangladesh have linked it to a range of illnesses that includes cardio-vascular disease, cancers of the lung, liver, and bladder in adults, and reduced intellectual and motor function in children (Wasserman et al. 2007, Argos et al. 2010, Rahman et al. 2010, Chen et al. 2011). Research in economics has estimated substantial economic costs for households due to lower productivity and labour supply (Carson et al. 2011, Pitt et al. 2015). Piped water from regulated and monitored supplies would likely be the most effective policy answer, but such solution would require immense investments in infrastructure that may not be sustainable or cost-effective for the foreseeable future. Identifying short-term mitigation strategies remains essential.

Arsenic in well-water has no odour, taste, or colour, but it can easily be detected via laboratory or field test kits. However, millions of wells in Bangladesh have never been tested for arsenic and, thus, their users are not aware of the safety status of their drinking water, or of that of their neighbours. This is unfortunate especially because the spatial distribution of high- and low-arsenic wells is stable over time (so that information on current arsenic levels is a persistent indicator of safety in the future) and is often highly mixed even over small distances, meaning that in principle owners of unsafe wells can switch to drinking water from safe wells owned by neighbours, who often allow this behaviour).1 Indeed, in a number of studies, after blanket testing of wells offered at no cost, between one-third and three-quarters of users of unsafe wells were found to switch to safer sources (Chen et al. 2007; Madajewicz et al. 2007; Opar et al. 2007; Bennear et al. 2013; Balasubramanya et al. 2014; Pfaff et al. 2017).

Between 1999 and 2005, the Bangladesh Arsenic Mitigation and Water Supply Programme used field kits to test close to five million wells across the country, marking them as ‘safe’ or ‘unsafe’ according to the Bangladesh standard of 50 parts per billion (ppb) (less stringent than the WHO’s standard of 10ppb). Since then, millions of new wells appeared, but testing is very rare as test kits are rarely available outside of the main urban areas. It is thus important to gauge whether demand for information on arsenic contamination is sufficiently high to sustain a market for tests (albeit at subsidised prices), and to identify ways to provide the information in a way that promotes risk-avoiding responses from households whose drinking water is found to be contaminated with high levels of arsenic.

In recent work (Maertens et al. 2018), we study these issues in the context of a randomised controlled trial carried out in 2016-17 in 112 villages in Sonargaon sub-district, in rural Bangladesh. In each village, surveyors identified all tubewells and then offered owners a test for a price of BDT45 (about $0.60, close to the price of one kg of rice in the capital Dhaka). The price was heavily subsidised, but still it was estimated to be high enough to cover for the salary of the personnel hired to sell and conduct the tests for the project.

The sales were conducted in different ways in villages assigned to different experimental arms. In the first arm (A), tests were sold with standard door-to-door visits, and the result of the field test was communicated immediately and privately to the owner. In a second group of villages (arm B), we leveraged the existence of within-village informal solidarity networks in order to increase water-sharing: surveyors were incentivised to sell tests to self-formed groups of up to ten individuals, where group members were asked to undertake an informal agreement according to which those with safe wells would share their water with group members whose water was found to be unsafe. The agreement was not binding legally, but our prior was that it would increase water sharing, first, by making it more likely through a form of soft-commitment and, second, by facilitating the within-group spread of information about which wells were safer. Finally, in a third group of villages (arm C), sales were individual (as in arm A), but the results were not only privately communicated to the owner but also posted in the form of a metal placard attached to the well, typically visible to other community members. Our prior was that metal placards would help to promote switching from unsafe wells, both by acting as a reminder to the well owners about the health risk, and as a means to facilitate the spread of information about which wells are safe within a village.

In Figure 1, we show that despite the low prices, demand for the tests was low across the board, with only about one household in every four purchasing a test in each of the three experimental arms. This is consistent with earlier work that has documented low demand for non-curative health-related products in developing countries (Barnwal et al. 2017; Dupas and Miguel 2016). 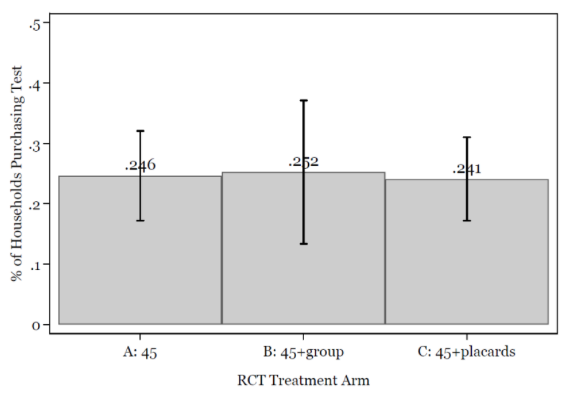 Source: Authors' estimations from baseline data (January to June 2016). Each bar is labelled with the arm-specific purchase rate. The vertical intervals represent 95% confidence intervals, estimated allowing for intra-village correlation of residuals. The number of observations by arm are, from left to right, n = 5; 164 (A), 4,697 (B), and 1,549 (C).

However, in Figure 2 we show that while demand for testing was barely affected by group sales or by the offer of a metal placard, these two alternative selling strategies increased enormously the fraction of households with unsafe wells switching to alternative sources of drinking water. While only 30% of these households switched with the standard sales, the rate increased to 55% with group sales and soft commitment, and to 72% with placards posted on the well. 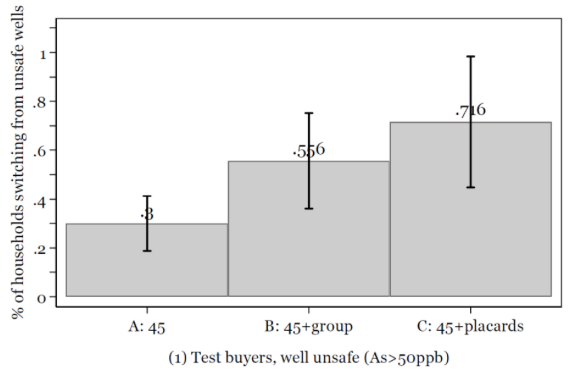 Source: Authors’ estimations from endline data (August 2016 to January 2017). Each bar is labelled with the arm-specific purchase rate. The vertical intervals represent 95% confidence intervals, estimated allowing for intra-village correlation of residuals. Each figure shows the fraction of households who stopped using the baseline well for drinking and cooking and switched to a different water source, by experimental arm. The number used in each bar are as follows: nA= 200, nB= 160, nC= 95[CA2] .

Overall, our study gives decidedly mixed news. On the one hand, and despite the positive fees, our team of surveyors managed to sell more than 2,800 tests for a total of about 11,400 wells. This allowed uncovering the presence of hundreds of wells with arsenic levels above the Bangladesh safety threshold, and overall about half of the users decided to switch to a different source of drinking water. On the other hand, about three quarters of wells remained untested, despite the fact that in most cases the users were unaware of the safety of the water they routinely used for drinking and cooking. In addition, and despite that well owners who bought tests likely did so to mitigate their exposure to arsenic, about half of users of unsafe wells were still using the same source at the time of the return visit. Further, among those who switched to a different source, many switched to a well that was either still unsafe (although possibly safer) or with unknown contamination levels. Much work is thus still necessary to learn how to best provide information in a way to induce desirable risk-avoiding behaviour.

Balasubramanya, S, A Pfaff, L Bennear, A Tarozzi, K Ahmed, A Schoenfeld and A van Geen (2014), “Evolution of households’ responses to the groundwater arsenic crisis in Bangladesh: Information on environmental health risks can have increasing behavioural impact over time”, Environment and development economics 19 (5), 631–647.

Bennear, L, A Tarozzi, H Soumya, A Matin, A Pfaff and L van Geen (2013), “Impact of a randomised controlled trial in arsenic risk communication on household water-source choices in Bangladesh”, Journal of Environmental Economics and Management 65, 225–240.

Pfaff, A, A Schoenfeld, K Ahmed and A van Geen (2017), “Reduction in exposure to arsenic from drinking well-water in Bangladesh limited by insufficient testing and awareness”, Journal of Water Sanitation and Hygiene for Development, 331–339.

Smith, A, E Lingas and M Rahman (2000), "Contamination of drinking-water by arsenic in Bangladesh: A public health emergency." Bulletin of the World Health Organisation 78: 1093-1103.

[1]The consensus view now is that other strategies such as water filters, household-level water treatment, and rain-water harvesting are not viable alternatives for lowering arsenic exposure, partly because of the cost and logistics of maintaining such systems in rural South Asia (Ahmed et al. 2006; Howard et al. 2006; Sanchez et al. 2016).