Colonial investments in education in India 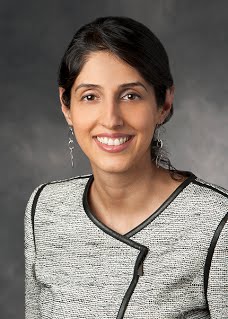 Investment, enrolment and achievement in primary education in India lag the rest of Asia and Latin America – a crisis 150 years in the making

Policymakers agonise over the defects of the Indian education system, from high rates of teacher absenteeism to the poor-quality teaching and absence of accountability (Drèze and Sen 1998, Probe Team 1999). With the exception of some extremely poor countries in sub-Saharan Africa, India does worse on most education indicators than other countries in Africa, Asia, and Latin America (Drèze and Sen 2013). But this is not new.

In 1900 fewer than one in ten children of primary school age in India attended any school. As of 1931, fewer than one in five men could read and write. Women did worse than men. with fewer than one in ten women recorded as literate. Only 46% of the population was numerate in 1930, with India ranked 106 out of 110 countries in data compiled by Van Zanden et al. (2014). These statistics, that capture India’s abysmal level of education throughout the colonial era under control of the British Crown from 1858 to 1947, are not cherry-picked.

According to recent estimates by Lee and Lee (2016), the years an average person in India of working age (15-64 years) spent in school increased, if one can call it that, from 0.03 years in 1870 to 0.88 years in 1940.1 In contrast, people in other parts of the world began attending school in rapidly increasing numbers in the late 19th and early 20th century. Figures 1a and 1b plot the average years of schooling from 1870 to 1950 for a selection of countries and regions. 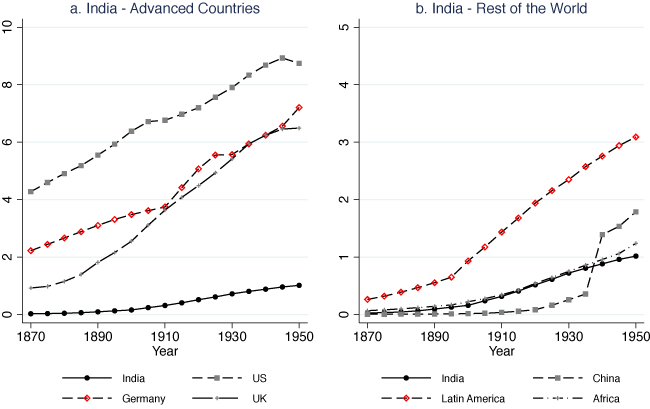 Source: Unwieghted average for countries in Latin America as reported by Lee and Lee (2016).

The gap between India and early leaders in years of schooling, such as the US and Germany, increased from less than two years in 1870 to 7.8 years in 1950. It may be unfair to compare colonial India to richer and more advanced parts of the world. But it is clear from Figure 1b that India also fell behind China and Latin America by 1950, even though in 1870 very few people attended school in any of these places. The comparison with China is instructive. The two countries had similar levels of income per capita in the late nineteenth century. Chinese school enrolments remained relatively low in the early twentieth century, but then pulled ahead of India in the 1930s and 1940s.

At the most basic level, British colonial policy in India massively underfunded Indian education. Public spending on human capital in British India was among the lowest in the world between 1860 and 1912 (Davis and Huttenback 1986). Per capita government expenditures in other dependent British colonies were 18 times higher than in British India, and in those locations human capital expenditures accounted for 16% of the government budget. In British India, human capital cost 4% of the budget. Even the neighbouring princely states spent twice as much per capita than British India. The heavy emphasis on secondary education was another policy mistake. Indian elites were complicit here because they often blocked schemes to expand mass education (Chaudhary 2009, Chaudhary et al. 2012). Public spending and primary school enrolments were increasing rapidly across the world, although countries were publicly funding secondary education only after a majority of children had completed primary school (Lindert 2004). India was the outlier.

What were the long-run effects of colonial policy? Jawaharlal Nehru, India’s first Prime Minister, believed that developing a strong industrial economy needed a technical workforce, and so higher education dominated the policy agenda in the 1950s and 60s. Policymakers did not turn to basic education in a serious manner until the National Education Policy of 1968, which recommended increasing public expenditures to 6% of gross national product, and free, compulsory education. But, the 6% goal remains elusive. In 2013 government expenditures on education were 3.8% of GDP.2

Nonetheless, public spending increased from less than 1% of gross national product (GNP) under colonial rule to 4% in 1990 (Chaudhary and Garg 2014). An expansion of public schools occurred in the 1970s, followed by another National Education Policy in 1986, which called for equalising access to schooling—especially for women and marginalised groups (Scheduled Castes/Scheduled Tribes). How effective were these policies? Using data on 148 districts of former British India, Chaudhary and Garg (2014) find colonial expenditures on rural primary education are positively correlated with rural literacy up to 1971. This historical funding, however, is unrelated to the provision of schools and rural literacy by 1991.  At the very least these policies improved access in previously underserved areas and reversed some of the legacy of India’s colonial history.

As India struggles to improve public education today, it is easy to overlook how far mass education has come. Between 1950 and 2010 the average years of schooling in India increased from 1 year to 6.6 years, a six-fold increase compared to the earlier 1870-1940 colonial era.3 Although too little, too late, this is progress.

Drèze, J and A Sen (2013), An Uncertain Glory. India and its Contradictions, Princeton: Princeton University Press.

[1] I use Lee and Lee (2016) because they construct estimates of schooling for 111 countries going back in time using a uniform methodology. The rest of the discussion on global schooling patterns also draws on their estimates. Data accessed from http://barrolee.com/Lee_Lee_LRdata.htm