Early marriage and the persistence of traditional gender norms 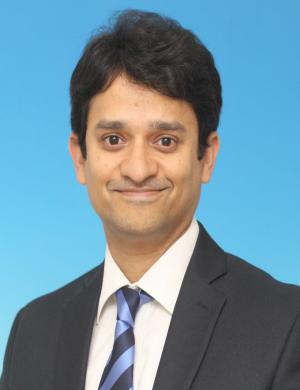 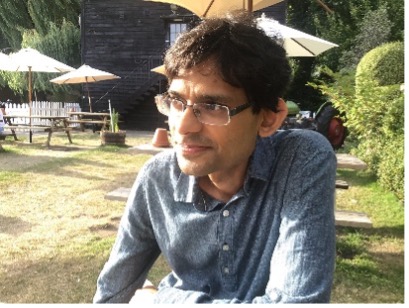 Traditional gender norms play a potentially important role in shaping women’s economic opportunities and outcomes. This idea is a key theme in Esther Boserup’s seminal account of women’s role in economic development (Boserup 1970). A growing body of empirical work also provides support for this hypothesis (e.g. Fernandez and Fogli 2009, Alesina et al. 2013). However, how these norms are sustained and recreated in each new generation, and how the cycle may be broken, are not understood nearly as well. In recent work (Asadullah and Wahhaj forthcoming), we present new evidence on a distinct social process for the transmission of traditional gender norms, namely, the experience of adolescent marriage among women. Marriage postponement increases disagreement with these gender norms – expressed, for example, in statements of the form “Boys require more nutrition than girls to be strong and healthy” – even among women who never went to school.

Measuring the consequences of early marriage

As the practice of early marriage is strongly correlated with other socioeconomic characteristics, establishing its causal effects is a challenge for researchers. We overcome this problem following an approach developed by Field and Ambrus (2008) which exploits the fact that in many traditional settings, there are strong social pressures for girls to marry from the onset of puberty. Thus, the age of menarche provides a source of natural variation in the age of marriage of women, which has been used to investigate how marriage timing affects other outcomes such as schooling, childbirth, and the health and education of children (Field and Ambrus 2008, Sekhri and Debnath 2014, Chari et al. 2017). We adopt this idea but exploit only differences in age of menarche and age of marriage between sisters, who would have been exposed to the same home environment and parental attitudes. To implement this idea, we use data from the 2014 Women’s Life Choices and Attitudes Survey, a purposefully designed nationally representative survey of women in Bangladesh complemented with tracking and interviews of a random sample of married sisters.

On average, our survey respondents – a representative sample of women in Bangladesh aged between 20 and 39 years – agreed with 6.8 out of 16 statements describing traditional gender norms, including statements to the effect that nutrition and education are more important for boys than for girls. Figure 1 shows the relationship between this measure and age of marriage in the raw data: girls who married younger agreed with more of these statements. However, this relationship is potentially confounded by the fact that, on average, women who experienced earlier marriage also had parents who were poorer, less educated and more likely to be living in rural areas. Therefore, we estimate the effect of early marriage exploiting only differences in marriage age within sister pairs due to differences in their age of onset of puberty. Our estimates corroborate the pattern in shown in Figure 1: the impact of marriage age corresponds to disagreement with one additional statement for every three years of delay in marriage. Using a sample of adolescent girls, we show that the age of onset of puberty has no direct effect on attitudes towards traditional gender norms once we have accounted for their marital status. 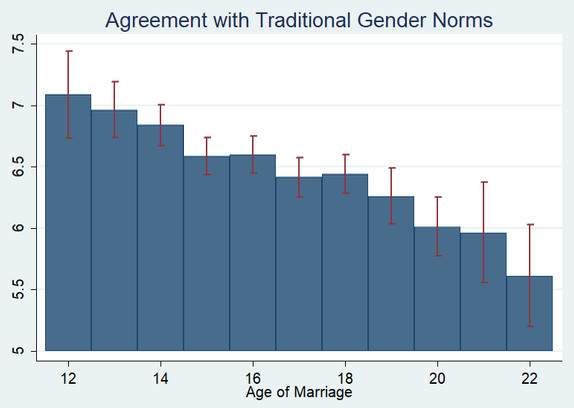 Source: 2014 WiLCAS.
Notes: The bars indicate the average number of statements (out of a total of 16) describing traditional gender norms with which married women in Bangladesh express agreement, grouped by their age of first marriage. The vertical lines show 95% confidence intervals for the group averages.

Why early marriage matters for attitudes towards traditional gender norms

We hypothesise that girls who marry later may have different attitudes because of:

We obtain additional estimates to consider which, if any, of these processes may be at work. First, we find that our estimated effects of early marriage on attitudes persist even for women who have never enrolled in school.  We also find that marriage postponement – due to later onset of puberty – does not affect the groom’s characteristics: his schooling, occupational type, parental land ownership or the probability that the groom’s household practices female seclusion in the form of purdah, an indicator of conservative social attitudes. Therefore, we rule out the first and second pathways proposed above for the effects of early marriage on attitudes.

The female respondents to the survey were asked to list women within their social network (school friends, neighbours, role models but not family members) who had made one or more non-traditional life choices (specifically, completion of secondary school, use of contraception before the birth of the first child, engaging in paid employment or an entrepreneurial activity). This information was intended to capture the extent to which the respondent’s social network could provide her with information or examples of non-traditional choices regarding important personal decisions. Applying our empirical strategy to this outcome, we estimate that early marriage decreases the probability that one or more women in her social network made non-traditional life choices. The finding is of interest in itself given that the social network can shape other economic outcomes. It also draws attention to the potential role of social networks in mediating the effects of early marriage on attitudes towards traditional gender norms.

However, we find that the estimated effects of early marriage on attitudes persists for a subsample of women with older sisters who engaged in paid work or completed secondary school. In other words, even a potential role model within the immediate family who made non-traditional life choices is insufficient to disrupt the transmission of traditional gender attitudes through early marriage. Therefore, we conclude that a large part of the effects we obtain is associated with the fourth hypothesised pathway: the direct effect of marriage at an early age and the experiences associated with it, including early childbearing and motherhood. We obtain additional evidence for this pathway from the sample of adolescent girls, showing that the event of marriage itself is associated with increased agreement with traditional gender norms.

Traditional beliefs that impose a hierarchy of rights within the household with boys taking precedence over girls – as documented for our study sample – can lead to worse outcomes for adolescent girls, in particular school dropout and early marriage. Our findings highlight how the phenomenon of early marriage can itself entrench gender inequality in the next generation, creating a circle that traps women in traditional roles, with limited autonomy and few economic opportunities.

However, this narrative also has a more positive implication. In recent years, there has been increasing effort by international development agencies, national governments, and NGOs to address the issue of early marriage using a variety of interventions, including educational incentives and skills training for adolescent girls, community awareness programmes, and conditional cash transfer programmes (Amin et al. 2017). Our findings imply that policies that are effective in lowering the incidence of female early marriage can impact upon gender imbalances even in situations where educational and income-earning opportunities for adolescent girls and young women are limited.

Chari, A, R Heath, A Maertens and F Fatima (2017), “The causal effect of maternal age at marriage on child wellbeing: Evidence from India”, Journal of Development Economics 127: 42-55.