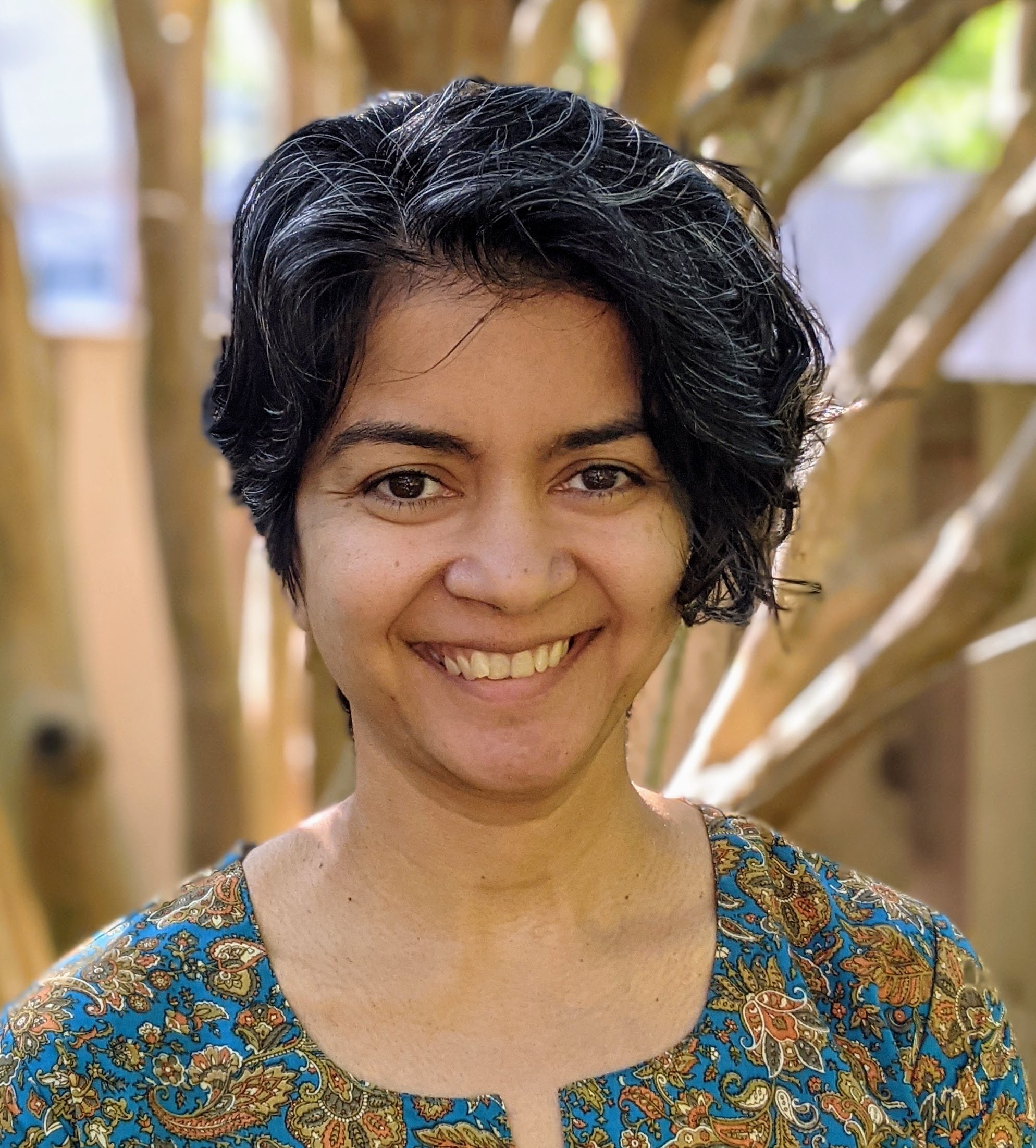 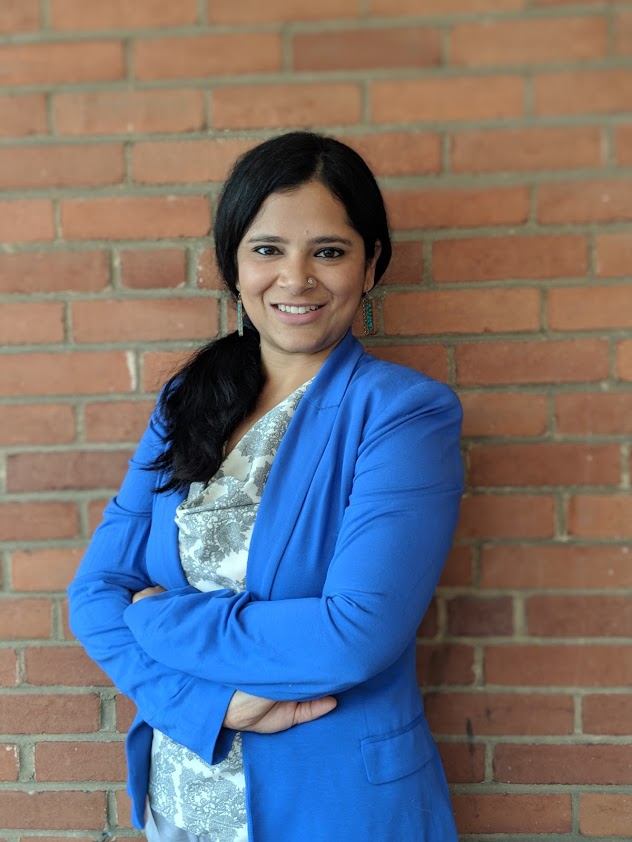 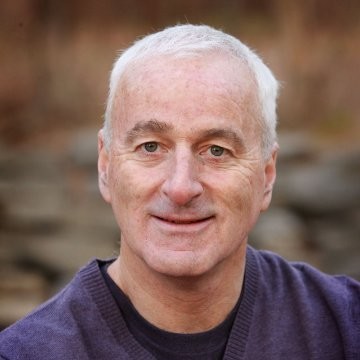 Senior Coordinator for Resilient and Sustainable Systems for Health, The Global Fund 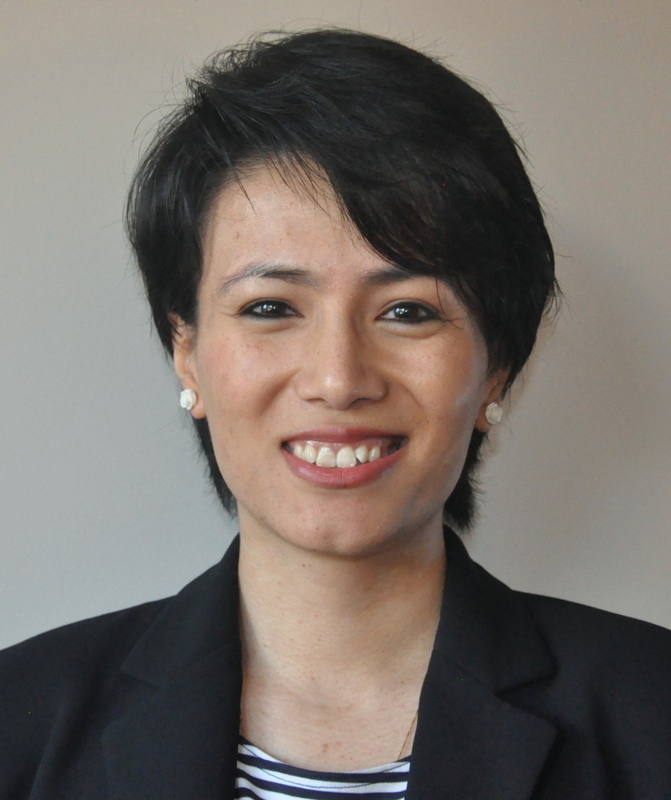 Providing operating funds to public health facilities can be as effective as alternative pay-for-performance models, at half the cost

Public-sector health workers provide low standards of care in many developing countries (Kruk et al. 2018). Poor quality of care can stem from providers not having the necessary knowledge of clinical protocols or not applying adequate effort (Das et al. 2008). To improve health worker effort in these settings, pay-for-performance (P4P) schemes in the public sector that tie remuneration to performance on certain agreed-upon indicators can be used, although the empirical evidence is mixed at best (Eichler and Levine 2009, Miller and Babiarz 2013). An influential early study showing that P4P improved health service delivery in Rwanda (Basinga et al. 2011) has engendered a US$2.5 billion World Bank portfolio on pay-for-performance in primary healthcare provision.

In many developing countries, other factors – not just poor worker effort – are important constraints to the provision of high-quality care. For instance, in much of sub-Saharan Africa, publicly owned health facilities do not have an operating budget under their control. Staff salaries are paid directly by the government and health facilities receive a set of drugs and supplies intermittently, usually based on their size and the services they are supposed to provide. If a piece of equipment breaks, the facility must request a repair from a centralised government agency, for instance, a district health team. Such repairs can take weeks or months. Thus, an open question is whether paying for performance or simply decentralising health financing by providing operational expenses to facilities is more effective at improving health service delivery in developing countries.

The Nigerian context is distressing – the country contributes 12.5% of the global maternal mortality burden and its maternal mortality ratio is eight times higher than India’s (Kassebaum 2014). Nigeria also has the world’s highest number of under-five deaths, followed by India. The population of India, however, is seven times higher than that of Nigeria. These staggeringly poor health outcomes in Nigeria have unsurprisingly been accompanied by a lack of improvement in health service delivery. In 1990, a Demographic and Health Survey (DHS) found immunisation coverage (using the third dose of the Diphtheria, Pertussis, and Tetanus vaccines as a proxy for complete immunisation) to be 33%. According to the 2016 National Immunisation Survey, it still remained at 33%.

In our study (Khanna, Loevinsohn, Pradhan, Fadeyibi, McGee, Odutolu, Fritsche, Meribole, Vermeersch, and Kandpal 2021), we evaluated a P4P pilot scheme in Nigeria against a simpler intervention that decentralised the financing of health facilities. Both the P4P and decentralised facility financing (DFF) interventions (1) provided funds directly to the facilities, (2) gave them substantial autonomy over these funds, (3) ensured community engagement in the budgetary decisions of the facilities, and (4) provided robust supportive supervision from district and state supervisors. In the decentralised facility financing (DFF) arm, the only stipulation regarding its use was that it not be used for staff remuneration or incentives. By design, DFF facilities received half of the amount P4P facilities earned.

We randomly allocated all 52 districts in the three study states (Adamawa, Nasarawa, and Ondo) to either the P4P or DFF arms thus constituting a randomised trial comparing the two approaches. In the P4P arm, 16 targeted services had a price associated with it and the facility received a payment that reflected the number of services provided multiplied by the price for that service. For example, if a facility fully immunised 100 children in the previous quarter and the price was US$5 per child immunised, the facility would receive $500 for immunisations. The amount earned by the facility across the 16 indicators was deposited electronically in a bank account controlled by the health facility office in charge (OIC) and a representative of the community. In both P4P and DFF facilities, a district health team visited every month to carry out supervision using a quantitative supervisor checklist and assess performance against these 16 targeted indicators. In addition, in P4P facilities, a third-party auditor conducted quarterly site visits to verify the performance reports. DFF facilities also had the same level of autonomy in using their funds as P4P and received funds into their bank accounts through electronic transfer. Table 1 below summarises the key differences between the two study arms.

We assessed the results of P4P and DFF after about three years of implementation using (1) household surveys in both P4P and DFF districts to judge population level coverage of key services, and (2) health facility surveys to assess the quality of care. As shown in Table 2, we randomly selected a sample of 571 public primary health facilities over 52 districts, from which we collected baseline and follow-up data on (1) health facility infrastructure (availability of drugs, equipment, etc.), (3) approximately 1,600 health workers, and (3) quality of care in antenatal visits and curative care for young children using direct observation of approximately 3,000 patient-health care provider interactions. We randomly selected approximately 5,000 households with recent pregnancies or a currently pregnant women from a listing of all households in the catchment areas of the sample facilities at baseline in 2014 and again at endline in 2017. The household questionnaire collected data on socioeconomic and demographic conditions along with detailed health histories, child anthropometry, and the woman’s pregnancy and delivery. The outcomes considered in our study were as outlined in a pre-analysis plan and are directly linked to the services incentivised in the P4P arm.

Decentralised health facility financing works comparable to pay-for-performance, at half the cost

Leveraging the randomised assignment to P4P or DFF and service utilisation measured from household surveys, we find little difference between the P4P and DFF arms in terms of the quantity of services delivered (Figure 1). The only indicator that P4P increased to a degree over DFF is the institutional delivery rate – an increase of 10 percentage points. However, relative to P4P, DFF led to significant improvements in the full immunisation of children (6 percentage points) and the use of insecticide-treated bed nets by young children (5.5 percentage points). For the other two indicators, the modern contraceptive prevalence rate and antenatal care seeking, there were no significant differences between the treatment arms. 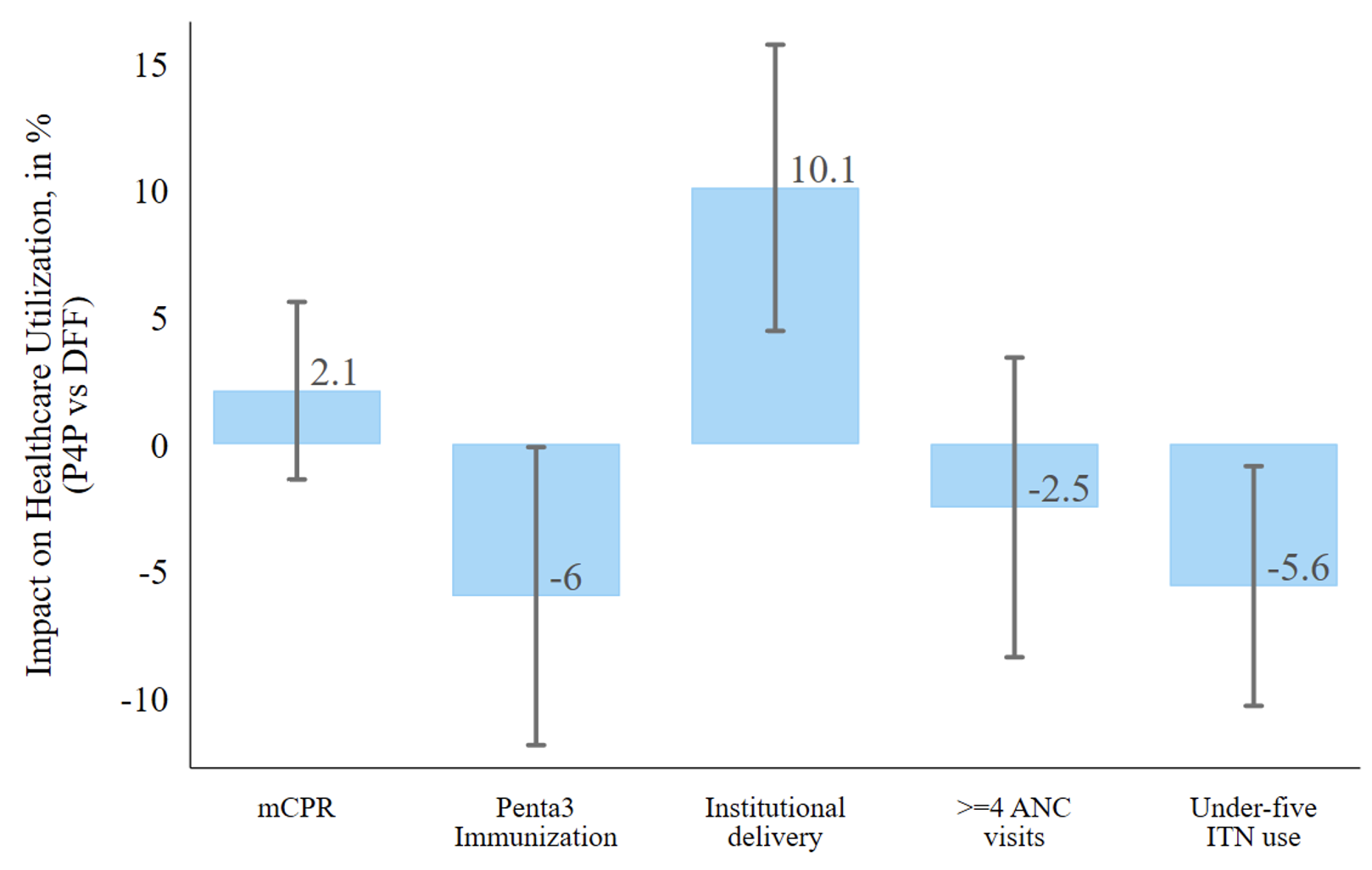 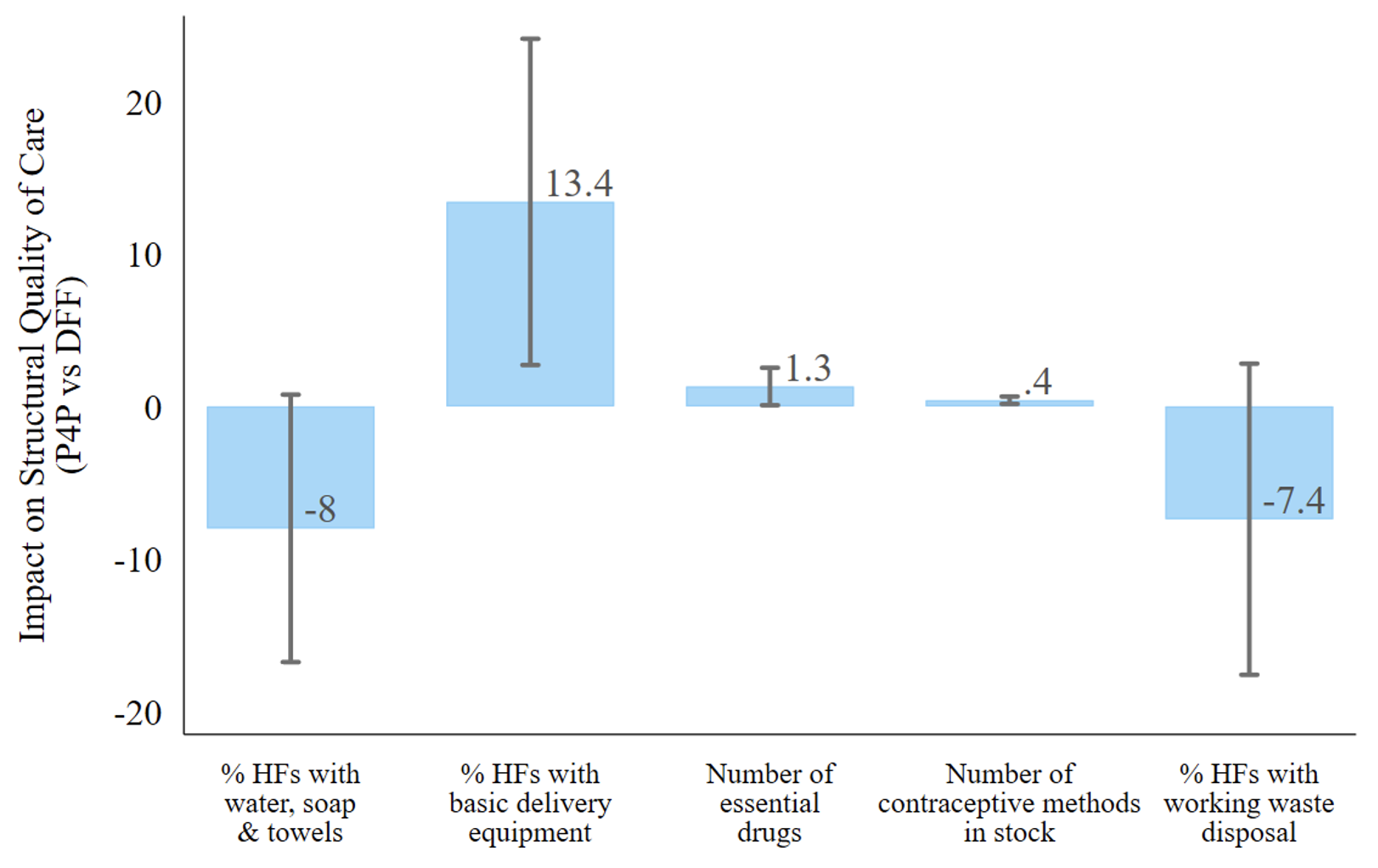 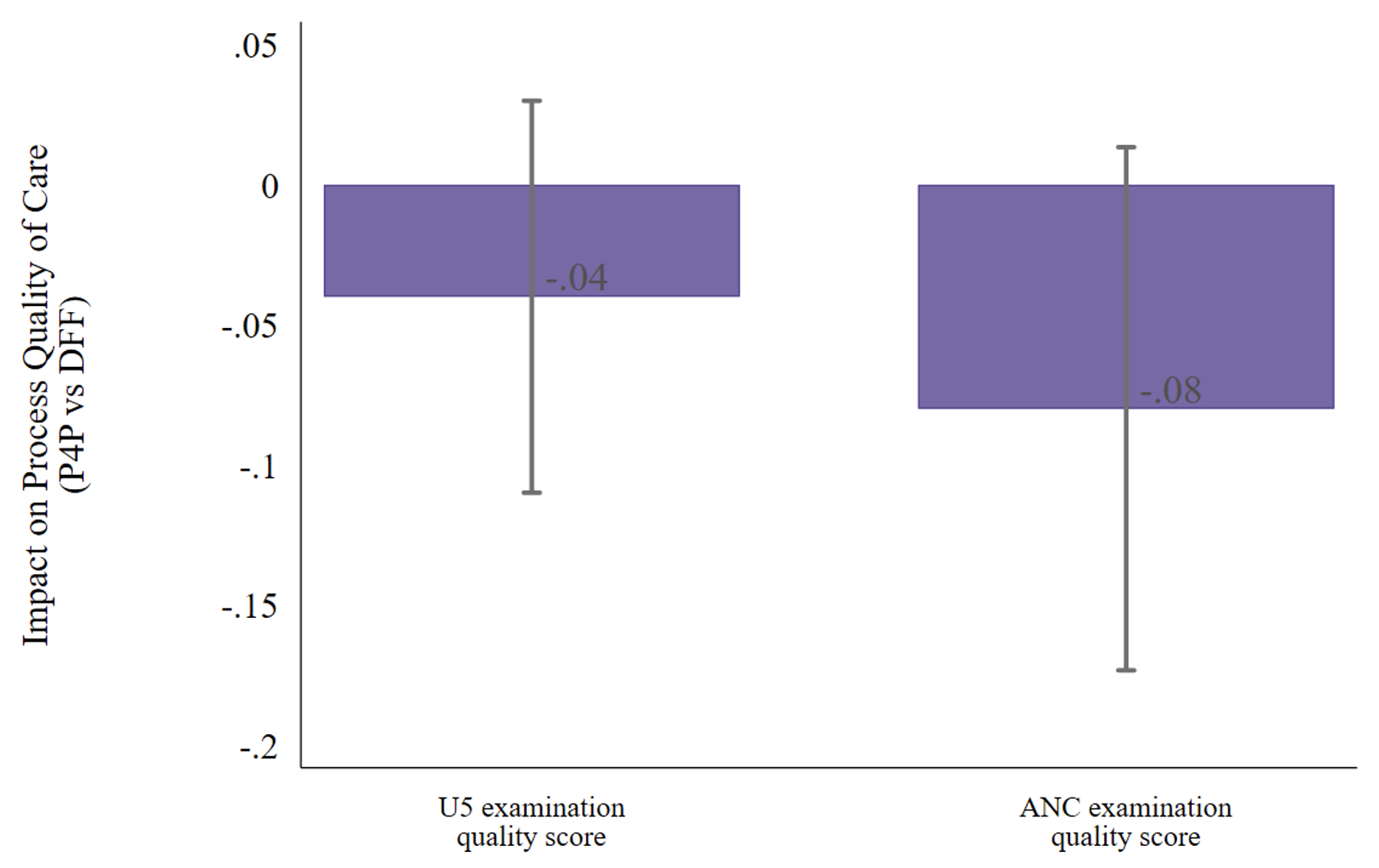 Combined, these results suggest that while complex interventions like pay-for-performance in the public sector can hold promise, simply fixing the fundamentals in under-resourced settings can go a long way. Financing health facilities, ensuring community engagement, providing supportive supervision, and giving them the autonomy to respond to shortages in supplies and breakdown in equipment can all be important interventions. Lastly, the draw of DFF is that at a cost of only $2.85 per capita per year (relative to PBF costs of $5.49 per capita per year), it can be financed from domestic resources, unlike many other programmatic and policy alternatives (Zeng et al., 2021).