Assistant Professor of Economics, University of Hawaii at Manoa

Adverse events early in life, including during the foetal period, often have long-lasting negative impacts. The evidence for this is abundant and comes from multiple disciplines, including medicine, epidemiology (McBride 1961, Jones 1973, Stein et al. 1975, Barker 1990), and more recently, economics (Almond and Currie 2011, Currie and Vogl 2013).

The economics of early life shocks

Numerous studies have investigated the economic impacts of a wide range of early life shocks. These include extreme events like famines and disease epidemics, to more insidious health shocks, like maternal malnutrition and pollution exposure. From this large body of research, one important lesson has consistently emerged. The effects of the early life health environment are substantial, often persist into adulthood, and show up in many areas of life: health, education, and labour market outcomes.

The persistent nature of early life circumstances is particularly troubling for children in low-income country contexts. Not only are these children typically exposed to more frequent and more severe shocks, but they also tend to live in resource-constrained households. In contexts like these, what can governments do to help children who are affected by adverse events early in life? More specifically, to what extent can public policy help these disadvantaged children catch up to the rest of their peers? This is the question that our recent study seeks to answer (Adhvaryu et al. 2018).

At first glance, this question may seem relatively straightforward to answer empirically: simply compare the effect of a government programme on a “disadvantaged” group (children exposed to some adverse event), to the effect of the programme on a “non-disadvantaged” group (children who did not experience this adverse event). Yet there are two important challenges that this simplified investigation overlooks:

The experiments: Evaluating the impact of Mexico’s PROGRESA

To account for these important challenges, our study design exploits the overlap in two “experiments”:

Fortunately, there do exist government programmes that have been rolled out as randomised experiments, precisely to allow for rigorous evaluation. One such programme is Mexico’s landmark conditional cash transfer programme, the Programa de Educación, Salud y Alimentación (PROGRESA). For evaluation purposes, the programme was implemented experimentally in 506 rural localities. 320 randomly selected treatment localities started receiving programme benefits in 1998, while the remaining control localities did not join the programme until the end of 1999.

The programme provided cash transfers to poor families, conditional on a variety of education- and health-related requirements. We focus on the education component, which involved bimonthly cash transfers to mothers if their child attended at least 85% of school days. Today, the programme continues to operate on a national scale (under its most recent name, PROSPERA). Due to the evidence generated from PROGRESA, it has served as a model for conditional cash transfer programmes the world over.

Much work has documented PROGRESA’s success in improving educational outcomes (Schultz 2004, Behrman et al. 2011, Parker and Todd 2017), particularly for girls. Our focus is different: we assess PROGRESA’s ability to help disadvantaged children catch up. Specifically, we are interested in whether the programme yielded larger benefits for disadvantaged children, who were exposed to adverse circumstance early in life, compared to those who were not.

For this adverse event (our second experiment) we choose to focus on negative weather shocks during a child’s year of birth. These weather shocks satisfy two important criteria. First, weather is arguably random and therefore provides us with a “natural experiment” that addresses the empirical challenges described above. Second, in the agricultural setting we study here, weather plays an important role in determining how much income a household spends on nutrition and other inputs. Therefore, adverse weather events in the first year of a child’s life are an important driver of early life circumstance.

We investigate how early life weather shocks affect educational attainment, and whether PROGRESA helps remediate them. Our main results are summarised in Figure 1, which highlights three important findings: 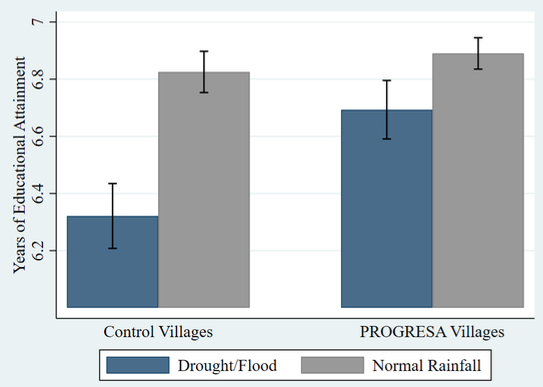 Notes: This graph reports educational attainment from the 2003 survey, among individuals aged 12 to 18 in that year. Error bars represent 95% confidence intervals.

The findings in our study have two important policy implications:

Bobonis, G J (2009). “Is the allocation of resources within the household efficient? new evidence from a randomized experiment”, Journal of Political Economy 117(3):453–503.