Can ‘white elephants’ kill? Evidence from infrastructure development in Peru 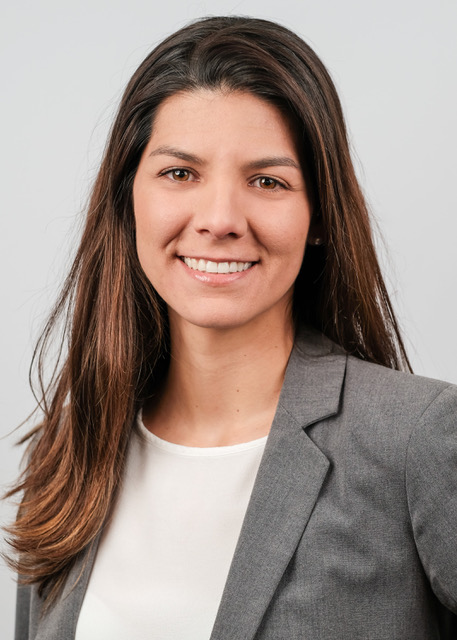 Economic research has been very useful at identifying the effectiveness of infrastructure projects such as sewerage, dams, roads and electricity networks in promoting development once they are completed and in use (e.g Duflo and Pande 2007, Rud 2012, Lipscomb, Mobarak, and Barham 2013, Donaldson 2018). However, the consequences of unfinished projects that suffer from mid-construction abandonment – so-called ‘white elephants’ – are less clear. My research (Bancalari 2020) shows that such white elephants are more than a waste of public resources with high opportunity costs: they can kill.

I evaluate the effects of unfinished sewerage projects on the mortality of children under the age of five. This is an outcome that sewerage infrastructure has improved in advanced economies during the previous centuries (Watson 2006, Alsan and Goldin 2019). My research was motivated by reports of sewerage excavations leading to a rise in mosquito infestations and children drowning in stagnant water-filled ditches as deep as two meters (El Comercio 2018, Correo 2018).

The government of Peru invested US$ 3 billion to initiate more than 6,000 sewerage projects between 2005 and 2015. The diffusion of sewerage installation projects in Peru makes an excellent case study because of the national scale of this public intervention, which led to considerable spatial variation in implementation. The phased rollout of this implementation provides a good opportunity to evaluate the effects of infrastructure development on child mortality. To do this, I construct a district-level panel of 1,400 districts for each year between 2005 and 2015 by combining several sources of novel administrative data and spatial data at a grid cell level. Specifically, I rely on detailed project-level data on expense plans and expenditure timing to identify the number of projects completed or left unfinished in a given district.

I exploit the variation in unfinished projects generated by mid-construction abandonment and delays. A majority of these projects were ‘white elephants’ at some point: 80% of the projects started between 2005 and 2012 were abandoned for at least a year and up to the whole decade of the study. On the other hand, several of the newer projects are on the verge of becoming white elephants. I also find large variations in project duration (some of which lasted as long as eight years) associated with cost overruns.

Peru’s natural geographic variation lends itself to the instrumental variable utilised in this study. The instrument captures how the implementation of sewerage projects would have evolved had investments been based solely on cost considerations. I rely on the fact that a combination of geographic characteristics (i.e. land gradient, elevation and river density) affects a district's technical suitability for low-cost sewerage projects. A time-variant project implementation is predicted with an algorithmic approach, subject to a nationwide budget constraint and threshold of maximum projects implemented. In the counterfactual scenario, a central planner would have implemented more sewerage projects in cheaper districts, and would have done so earlier in the period of study.

The identification assumption is that no other factors affecting mortality rates change over time along the same spatial lines as the predicted implementation of projects. I control for time-invariant impacts of geography on health through district fixed effects, and annual shocks through year fixed effects. As a validity check, I find that my instrument has no effect on mortality before the start of projects and that it is not related to other types of infrastructure development, residential sorting or geography-specific mortality trends.

The maps below depict the actual (left) and predicted (right) implementation of projects in Peru, as a snapshot in 2009. The predicted allocation rollout provides variation across districts and years. The first-stage estimation proves the relevance of the instrument. 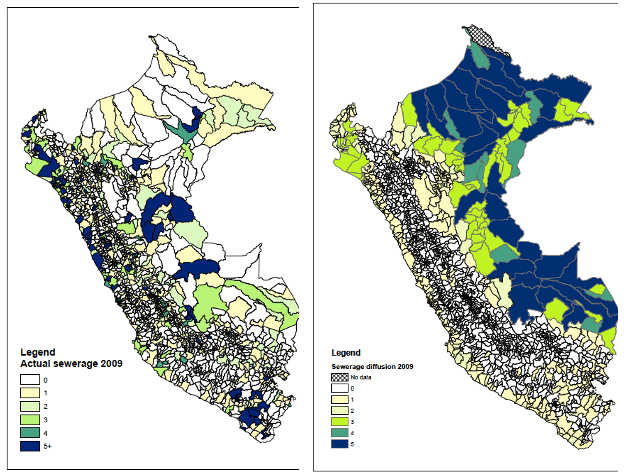 I find that with every additional sewerage project launched, infant and under-five mortality increased by 6% over baseline averages. There are three mechanisms behind these non-trivial effects.. 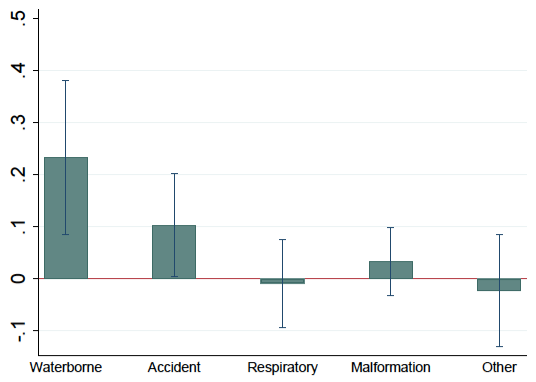 What happens once projects are completed?

To get a full picture of project implementation and to better understand the counterfactual scenario, I also estimate the effect of completed projects. As an additional instrument, I use the interaction between a district's geographical suitability for low-cost sewerage projects and the partisan alignment between the district mayor and central government. Mayors politically connected to the parliament complete more projects, conditional on starting them because of the district's geographic suitability for low-cost sewerage projects.

How can we stop ‘white elephants’ and prevent social costs?

By the end of this study in 2015, 35% of the projects were still abandoned with an average of 40% of the contractual sum disbursed. If these projects are never completed, rough calculations suggest that they will generate a waste equal to one third of the public expenditure on tertiary education in 2015 in Peru (World Bank 2020). These figures reflect the high social opportunity cost of the non-completion of public infrastructure.

While the wasteful government expenditure on abandoned projects is worrisome, it is even more disconcerting that this inefficiency kills children. However, there are relatively simple steps that may help reduce this problem. Stricter health and safety measures, improvements in the quality of primary health care, and the provision of alternative safe sources of water and sanitation can help prevent child deaths during the construction phase.

Existing literature points to policy alternatives to attain project completion, but there is room to explore further. Rasul and Rogger (2018) suggest that managerial practices of local bureaucrats such as incentive schemes increase the probability of completing infrastructure projects. Williams (2017) suggests the inclusion of inter-governmental rules for completing a project before starting a new one as a way to deal with unstable local political dynamics that deter project completion.

Finally, for the social benefits of completed public infrastructure to fully manifest, governments need to run the `last mile’ – i.e. connect the infrastructure to final users. Ashraf, Glaeser, and Ponzetto (2016) suggest finding a ‘sweet spot’ between fines and subsidies to promote universal connectivity to public sewers. Galiani, Gertler, and Schargrodsky (2005) find large gains in connectivity and performance linked to the privatisation of sewerage services in Argentina, which ultimately decreased child mortality.

Bancalari, A (2020), "Can White Elephants Kill? Unintended Consequences of Infrastructure Development in Peru", The IFS WP 20/32.

Isham, J and D Kaufmann (1999), "The Forgotten Rationale for Policy Reform: The Productivity of Investment Projects", The Quarterly Journal of Economics 114 (1): 149–84.