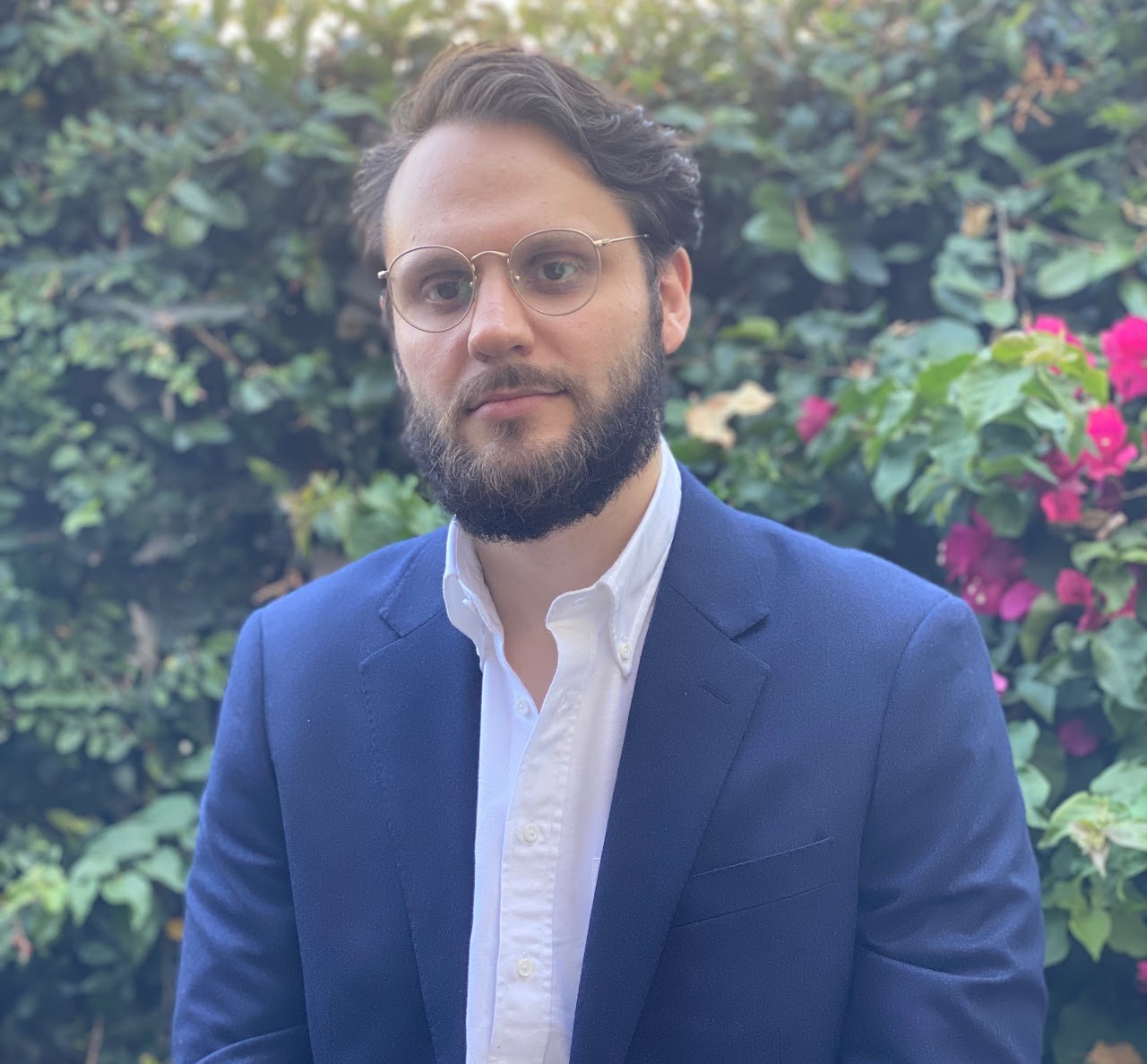 The global urban population share grew from 33% in 1960 to 56% in 2019, and is predicted to reach 68% by 2050 (United Nations 2018). Most of this urban growth will take place in the developing world. While these predictions are consistent with past trends in urban growth, there is considerable debate about the quantity and quality of housing the world's cities will be able to supply for ‘new’ residents. Satisfying the predicted increase in demand to live and work in cities will only be possible with a strong supply response from developers who build residential structures.

In most cities, however, the supply of buildings is highly regulated by local authorities – so-called ‘not in my back yard’ NIMBYism – who can legally determine if and how developers can construct real estate structures (Glaeser et al. 2005, Gyourko and Molloy 2015, Gyourko et al. 2021). Zoning restrictions, such as limits on the density of buildings, are generally associated with increases in the cost of living (Glaeser and Gyourko 2018, Brueckner and Sridhar 2012, Chengri 2013), greater segregation and spatial divergence (Trounstine 2018, Ganong and Shoag 2017), and loss of economic output (Hsieh and Moretti 2019). Yet, there is little research that directly quantifies how cities evolve in terms of housing supply, prices, and winners and losers when a major zoning reform is initiated.

Changes in housing supply after the 2016 reform

In a new study (Anagol, Ferreira, and Rexer 2021), we examine the impact of a major zoning reform on the urban built environment in São Paulo, Brazil, which is the fourth largest metropolitan area with a population of 21 million residents. This reform had the general goal of providing more dignified housing for its residents and allowing more densification along some transportation corridors.1 We estimate a quantitative model of housing supply and neighbourhood demand in order to assess how changes in housing regulations affect the welfare of city residents.

The city of São Paulo implemented a detailed, block-by-block change in real estate regulation in 2016. In practice, each city block was assigned a maximum built-area ratio (BAR) – the ratio of constructed square meters per square meter of land area – which fundamentally defines the density of units that developers can develop on a given land parcel.2 On average, the maximum BAR in the city's approximate 45,000 blocks increased from 1.54 to 2.09, allowing 36% more construction for a given lot size, and 45% of the city blocks had a maximum BAR increase of 1 or more.3 This reform provides fine-grained variation in density restrictions both over time and across city blocks, allowing us to observe how developers respond to changes in BAR across similar up-zoned versus non up-zoned areas. Moreover, São Paulo has an unusually rich set of administrative data on building permits, the built environment, demographics, commuting patterns, and wages, allowing for detailed tracking of reform impacts and estimation of welfare consequences. Figure 1 shows the granularity with which we can analyse changes in BAR.

Figure 1 Changes in maximum BAR across city blocks in São Paulo, from 2004 to the 2016 reform 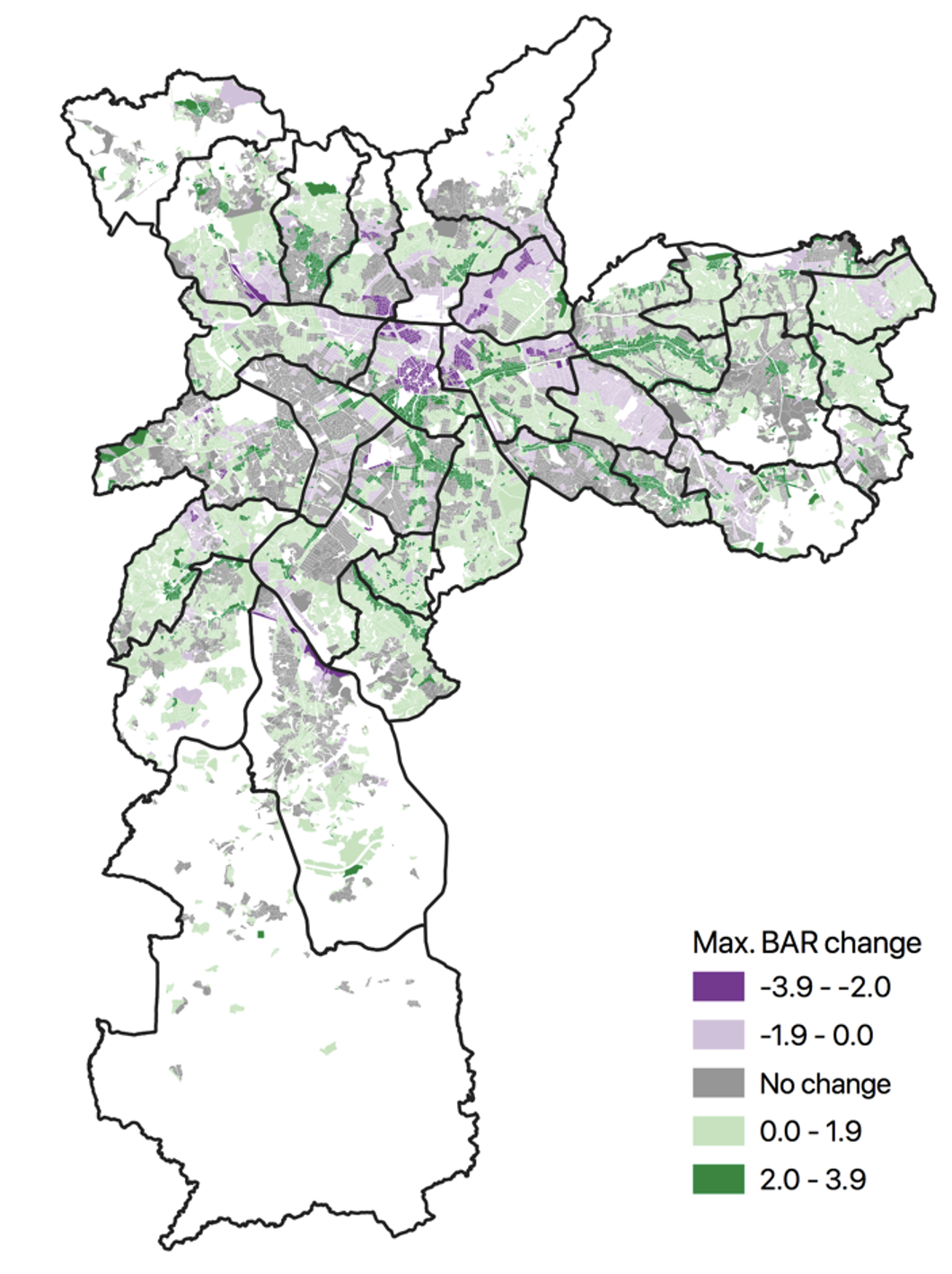 To identify the effect of the 2016 reform, we implement a ‘boundary discontinuity design’ where each block is categorised as either a treatment block if BAR increased after the reform, or a control block if BAR stayed constant or decreased after the reform. The boundary discontinuity design focuses on the variation in BAR between nearby treatment and control blocks, allowing us to more effectively control for neighbourhood differences other than the zoning changes induced by the reform. We find that the 1.4 BAR point increase at the cut-off between nearby treatment and control blocks causes a 66% increase in permits per unit of BAR relative to nearby control blocks. This sharp increase suggests that the previous zoning regime was substantially limiting the amount of new housing provided in São Paulo.

Modest welfare gains from the 2016 reform, primarily generated by changes in the built environment as opposed to lower prices

We set up a micro-level model of supply and demand to estimate the welfare effects of the 2016 zoning reform, and to evaluate other more aggressive zoning reforms. The ‘supply’ side of the model estimates how different zoning regimes and prices influence the quantity and location of housing that developers are likely to build. The ‘demand’ side of the model uses survey data from 24,800 São Paulo metropolitan statistical area households to quantify parameters for how households value new building structures, commuting time, and different types of neighbours. Our simulations calculate new housing market equilibria for the city of São Paulo ten years after the studied reform, delivering long-term predictions on how zoning reform affects the price, quantity, and location of housing, and quantifying the value households gain from zoning reforms.

We find that the 2016 reform generates only a 2.2% net increase of the total housing stock in the city, leading to 0.5% reductions in prices on average, and consequently small gains in welfare. In this sense, the 2016 reform was a ‘mild’ reform that is unlikely to significantly increase housing affordability in São Paulo. Interestingly, welfare gains from price changes increase more than four-fold once we account for changes in the built environment, as density increases and the age of housing units falls. Households strongly value these neighbourhood amenities, suggesting that a fair amount of the economic value of zoning reforms comes from individual preferences for densification and a newer housing stock. Congestion costs, which we model as increases in commute times due to more urban density, only reduce aggregate welfare gains by 1.3%.

Counterfactual simulations of more aggressive zoning reforms like doubling allowed densities in up-zoned neighbourhoods produce much larger gains in welfare (2.98% of city GDP). Since the BAR averages implemented by São Paulo in 2016 are a third or less of those permitted in denser cities like Singapore and Hong Kong, local policymakers still have substantial room to implement more aggressive densification strategies that improve resident welfare.

Across all reforms, we find that college-educated and higher-income households benefit from eased density restrictions the most, since more of those families can now move from the suburbs to the city centre. As such, demographic change in the city is limited even under more aggressive reforms since those who migrate are positively selected and therefore resemble incumbent residents. However, socioeconomic gaps between the urban core and the surrounding suburbs increase.

Finally, we find that the zoning reform causes an aggregate loss in home-price value that is 16 times larger than the consumer gains, which may explain the lack of homeowner support for more dense construction.4 Our results suggest that advocates of zoning reform should critically consider these aggregate home-price losses while designing policy proposals.

2 We use the term BAR as it corresponds directly with term used in São Paulo for this concept. It is closely related to the ‘floor-to-area’ (FAR), ‘floor-space index’ (FSI) and ‘floor-space ratio (FSR) metrics used in other parts of the world.

3 See Tabarrok and Cowen (2018) for a discussion of the floor-space index parameter in India, similar to the BAR parameter, and its importance in determining housing availability in Mumbai.

4 We also measure other effects of the reform, such as profits to real estate developers, welfare gains for new incoming residents, and potential changes in productivity due to more agglomeration in São Paulo (as São Paulo has some of the highest wages in Brazil). Amongst those factors, profits to developers is the largest, but even the aggregation of all potential gains does not match the nominal price losses faced by existing real estate owners.