The effect of infrastructure on firm gains from trade liberalisation: Evidence from Ethiopia 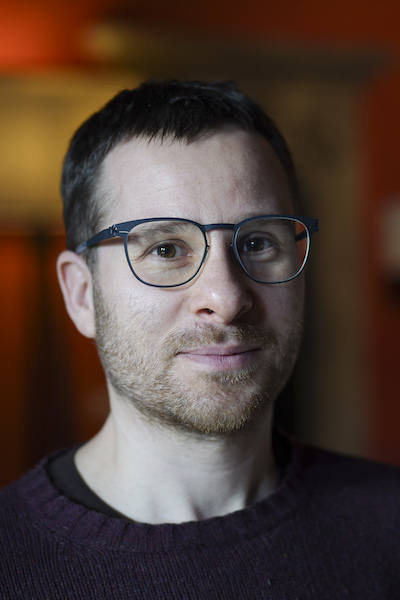 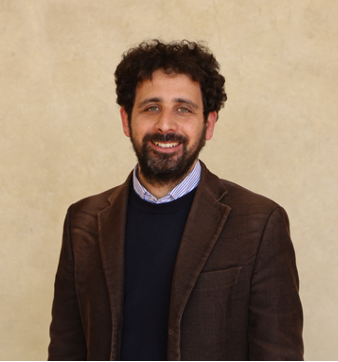 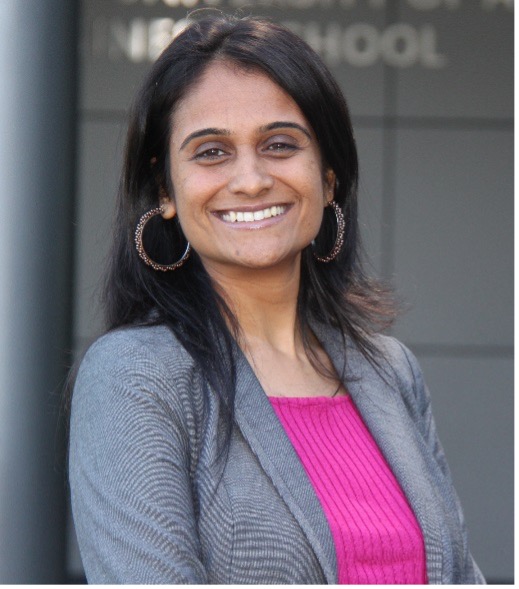 While trade liberalisation can bring economic gains by improving productivity and welfare, it also has distributional impacts. Research has shown that local conditions, including contract enforcement (Ahsan 2013), access to credit (Sundaram 2015), and quality of institutions and provision of public goods and infrastructure (Pavcnik 2017) are important in determining who gains and who loses from reducing trade barriers. Identifying and understanding these complementary conditions and the channels through which they shape the effects of trade liberalisation is crucial to inform policy and ensure that trade works for all.

In a recent study focusing on Ethiopia (Fiorini, Sanfilippo, and Sundaram 2021), we propose that road infrastructure plays a key role in ensuring that trade liberalisation results in productivity enhancements for firms, particularly in developing countries. We show that a fall in input tariffs (import tariffs on intermediate inputs used by firms) is associated with a larger increase in productivity for Ethiopian manufacturing firms in locations with better roads. This is not only because input tariff reductions are magnified when the cost of transporting inputs to firms intra-nationally is lower, but also because firms have improved access to other domestic markets. Resulting changes in demand conditions and greater competition can incentivise firms to adopt new and higher quality inputs or superior technology, all of which can increase productivity.

Roads and trade liberalisation in Ethiopia

Being a landlocked country with a poorly developed railway system, Ethiopian road transport represents an important mode for intranational movement of people and goods.1 At the end of the 1990s, the deteriorated condition of the existing road network spurred the Ethiopian Government to launch a major infrastructure reform programme: the Road Sector Development Programme (RSDP). The first three phases of the programme from July 1997 to June 2010 involved construction, rehabilitation, upgrading, and maintenance of federal and regional roads by the Ethiopian Roads Authority (ERA) and the Regional Roads Authorities (RRAs).

Figures 1A and 1B show the road network in 1996 and new and upgraded roads between 1996 and 2010, respectively, also highlighting the towns covered by the sample that we analyse in our paper. Using changes to the road network under the RSDP, we construct a measure of intranational market access that varies across Ethiopian towns and over time. 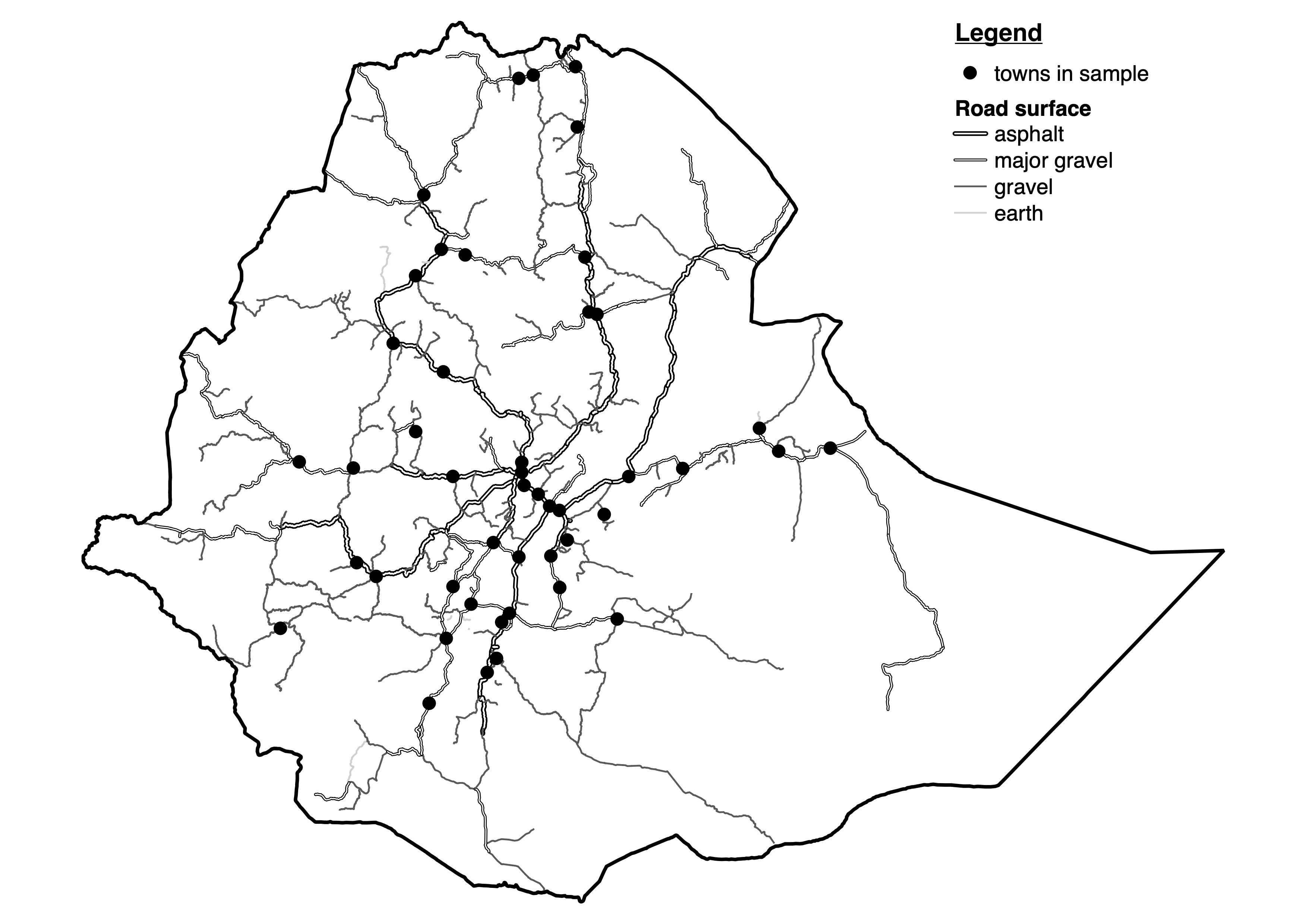 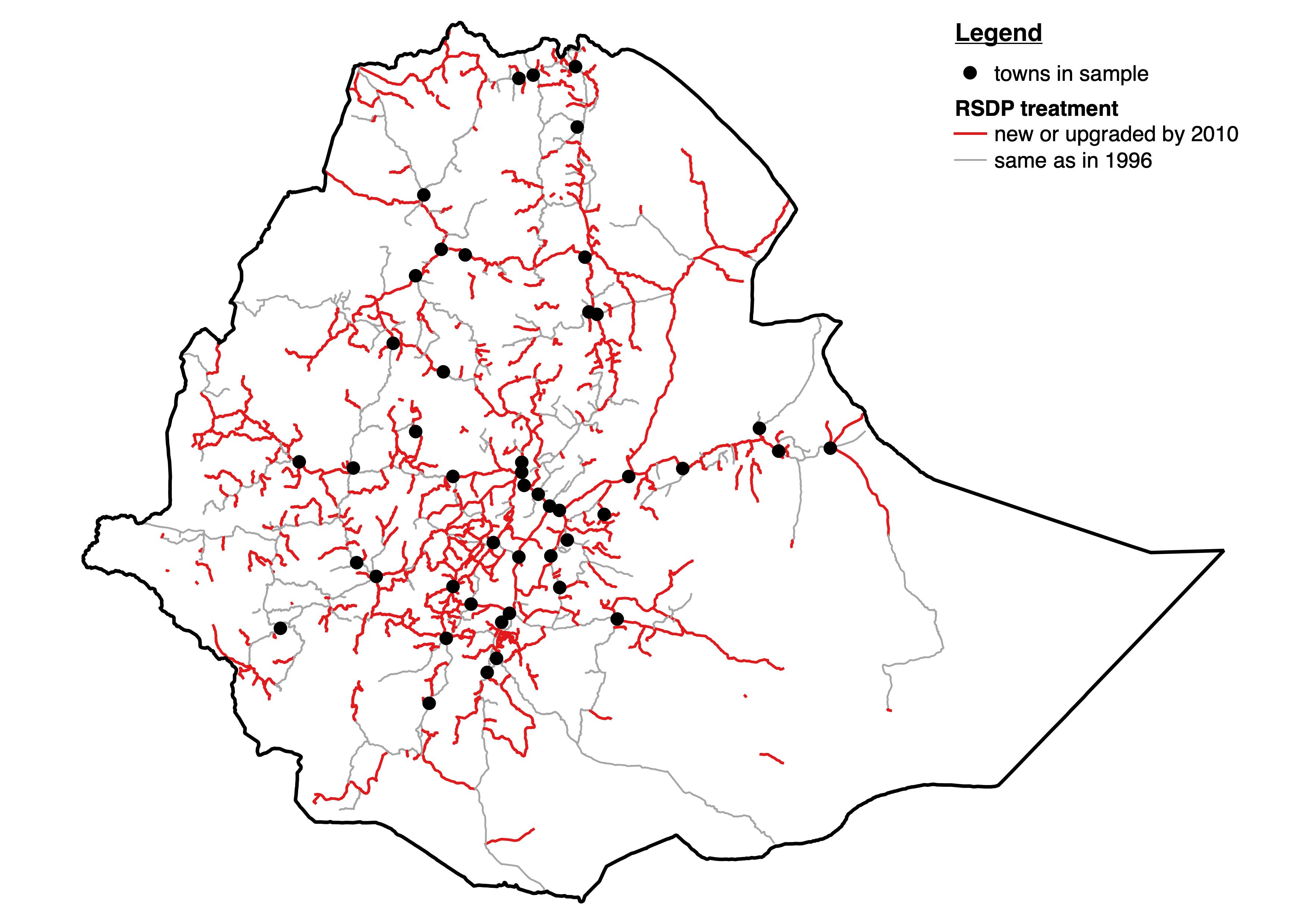 The RSDP coincided with Ethiopia’s trade liberalisation as import tariffs fell dramatically in the early 1990s. The decrease continued into the late 1990s and early 2000s, spanning the period of our analysis. This unique timing of reforms enables us to investigate the complementarity between input tariff reductions and road infrastructure improvements in driving firm productivity.

Complementarities between roads and trade liberalisation

Our results show that the impact of input tariff reductions on firm TFPQ depends critically on market access. We illustrate this complementarity in Figure 2. The horizontal axis shows the distribution of market access in our sample based on firm-year and town-year observations.  The thick downward-sloping line plots the marginal effect of the input tariff for increasing levels of market access. 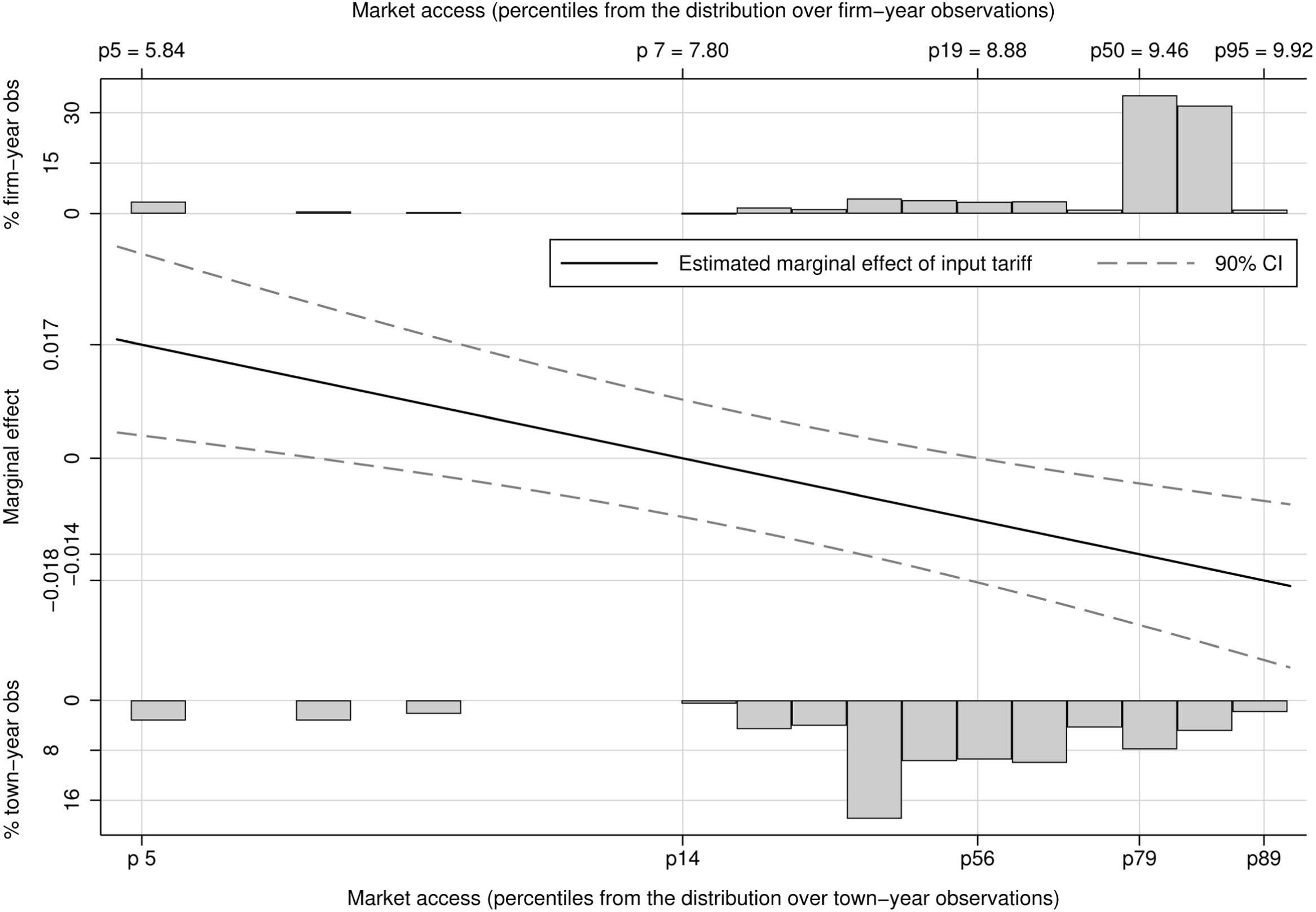 Taken alone, input tariff reductions decrease input prices for firms, incentivising productivity-enhancing actions that increase firm productivity. Roads can magnify this mechanism in two ways, as illustrated in Figure 3. First, roads shape the pass-through of an input tariff reduction to a decrease in input prices for firms (the red arrow). Second, and most importantly, they influence the incentives faced by firms to take productivity-enhancing decisions in response to the cost advantage generated by these lower input prices (the blue arrow).

In our paper, we test these two channels and find that a fall in the input tariff corresponds to:

This suggests that roads do not simply magnify the cost reduction from a fall in input tariffs for firms. Rather, the quality of roads determines the degree of market access in the firm’s area (town). Better connectivity to intranational markets means that, on the one hand, firms can access larger demand. On the other hand, firms compete more intensively with other final good producers, given that an increase in market access allows consumers to access goods produced by firms in other locations. Greater demand and more competition increase the potential gains for firms from improving TFPQ, increasing incentives to use the cost advantage implied by a reduction in input tariffs to undertake productivity enhancements.

Road infrastructure improvements are critical to magnifying the gains to physical firm productivity from a reduction in input tariffs. A novel exploration of the mechanisms reveals that these gains cannot solely be attributed to cost reductions from lower input prices being amplified with lower transport costs. Instead, road improvements increase access to intranational markets and thereby incentivise firms to enhance productivity. Lastly, better market access from roads creates a more competitive environment for firms, so that lower firm costs from cheaper inputs do not translate into higher markups.

Sundaram, A (2015), “The Impact of Trade Liberalization on Micro Enterprises: Do Banks Matter? Evidence from Indian Manufacturing”, Oxford Bulletin of Economics and Statistics 77: 832–853.