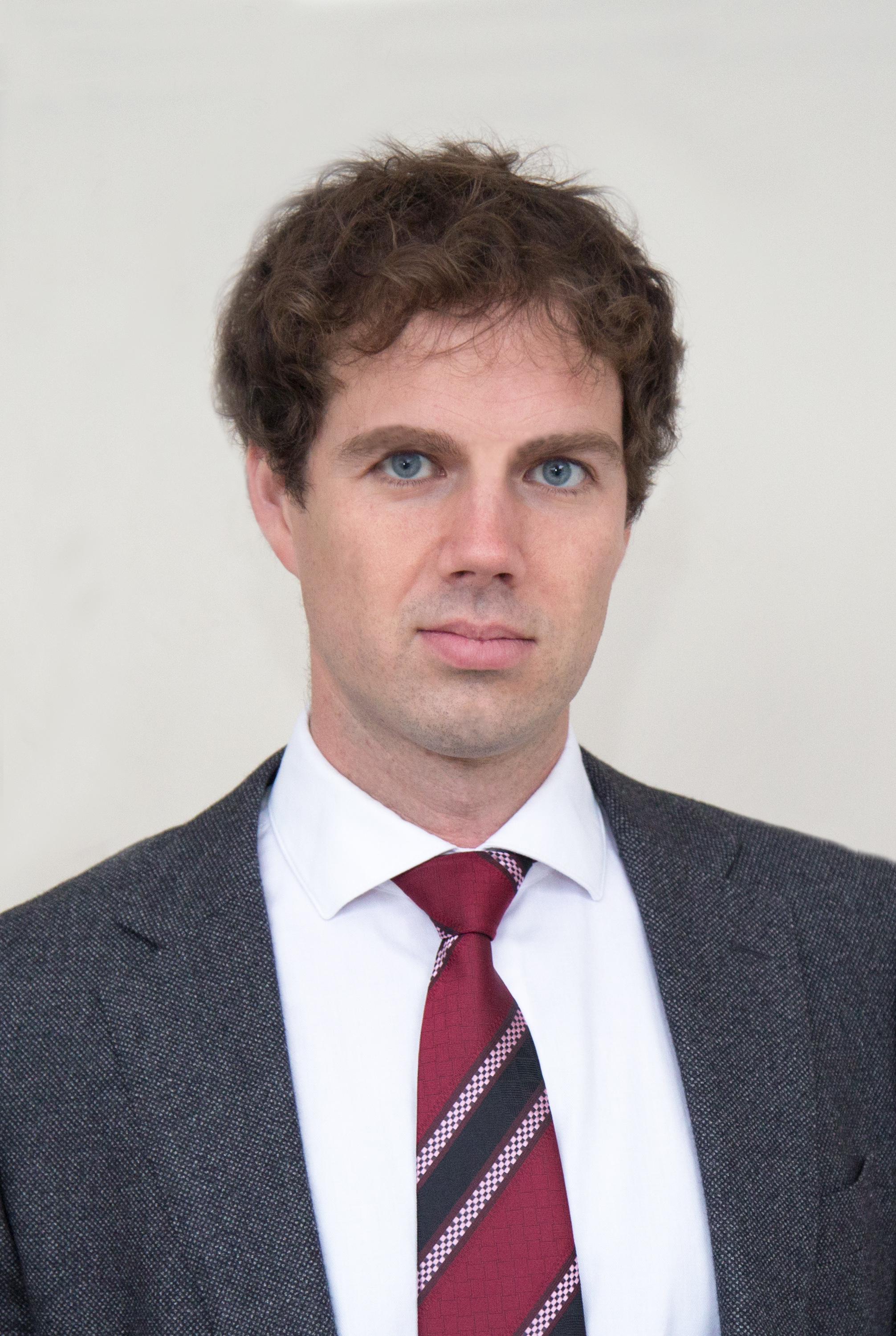 A study finds that military-led projects in the Afghan health sector alleviate violence, whereas those in the education sector actually provoke conflict

“Education can be the cause of violence in some Southern provinces... If there is no school, no teacher, no education, they will not target that village!”
Afghan NGO, field interview, 2013

Well over a decade of Western engagement in Afghanistan and Iraq has collectively claimed the lives of over 180,000 civilians and over 8,000 foreign troops.1 In addition to military force operations, a cornerstone of both interventions has been reconstruction activity – investing in infrastructure and services in agriculture, transportation, education, health, and security, among other sectors. To this end, the US government alone has spent over $100 billion in Afghanistan (SIGAR 2014), and over $80 billion in Iraq (SIGIR 2013). These investments are made under the expectation that reconstruction ‘wins hearts and minds’ in the fight against insurgents. While this assumption is echoed between policymakers, military strategists, and politicians, it has seldom been tested. Research has been hampered by confidentiality surrounding data on military spending, insurgent activity, and public opinion in conflict settings. So, motivated by the disconnect between policy and evidence, I conducted field interviews with development stakeholders in Afghanistan to shed light on this issue.

Can ‘development’ be undesirable for local communities?

One large domestic NGO recounted that they had been running a successful accelerated learning program in Kandahar province, when a major government donor decided to monitor the project. According to the NGO, publicly associating the project with foreign military would derail the project’s legitimacy in the eyes of local community members. As such, the NGO pleaded with the donor to visit the site without the standard accompaniment of heavy armaments. But the donor nevertheless followed protocol – upon departure, three of the NGO’s teaching staff were killed in its wake.

The anecdote above exemplifies general agreement among practitioners that ideologically sensitive projects (like those in education) can be controversial when implemented by foreign militaries (as opposed to civil actors). Counterinsurgency doctrine is cognisant of the potentially abrasive nature of military-led reconstruction activity. Still, economic theory has been unable to accommodate the notion that ‘development’ as such can be undesirable for local communities. Economists have tended to depict the relation between development and conflict in purely financial terms. Opportunity cost models of insurrection suggest rebellion is an occupational choice which becomes less attractive as development strengthens the licit sector. Resource competition models of conflict suggest insurgency is an attempt to gain control over the economic product of an area, which itself rises with development activity. These strands of theory have enabled scholars to identify many proximate drivers of conflict, and to better understand its temporal and spatial distribution (e.g. Iyengar et al. 2011, Dube and Vargas 2013, Nunn and Qian 2014). But together with other prominent studies on the relation between development and conflict (Berman et al. 2011, Berman et al. 2011, Bohnke and Zurcher 2013, Crost et al. 2014, Beath et al. 2016), this vein of literature has been broadly inconclusive. This column suggests one explanation for the mixed results – studies have overlooked that resistance need not be driven by economic considerations.

The study: The impact of reconstruction projects in Afghanistan on levels of violence

In a recent paper, I develop a formal theoretical framework in which political sentiment determines the level of community support for an insurgency (Child 2017). Based on field interviews, I suggest reconstruction projects can be either appreciated on humanitarian grounds, or opposed for causing ideological frictions. The relative combination of project types thus endogenises the level of politically motivated insurgency in equilibrium. I then test this novel theoretical perspective using unique data from Afghanistan, and find empirical support for its key predictions.

As mentioned, the sensitive data required for such an analysis is difficult to obtain. The now-defunct NATO C3 Agency’s Afghanistan Country Stability Picture database has long been removed from the public domain. Having been granted official access years ago, however, I procured an extant hardcopy version in Kabul. The database catalogues almost 120,000 development projects across Afghanistan, of which over 22,000 were led by foreign armies, rather than traditional aid providers. After visiting the Central Statistics Organisation of Afghanistan, I obtained hardcopy national survey data on education, health, religiosity, and women’s rights. Finally, following extensive navigation of appropriate channels, I was granted access to public opinion polls reflecting Afghan views towards international forces. Merging these sources with US government-assembled data on conflict, I was able to generate a panel covering all 398 districts of Afghanistan over 57 months (from January 2005 until September 2009). Figure 1 juxtaposes average reconstruction project volumes with violent incident counts, aggregated to the district-month and expressed in per capita terms. Even within small geographical regions, there is much spatial variation to exploit for identification using panel data techniques. Temporal variation (not reflected here) is similarly rich. 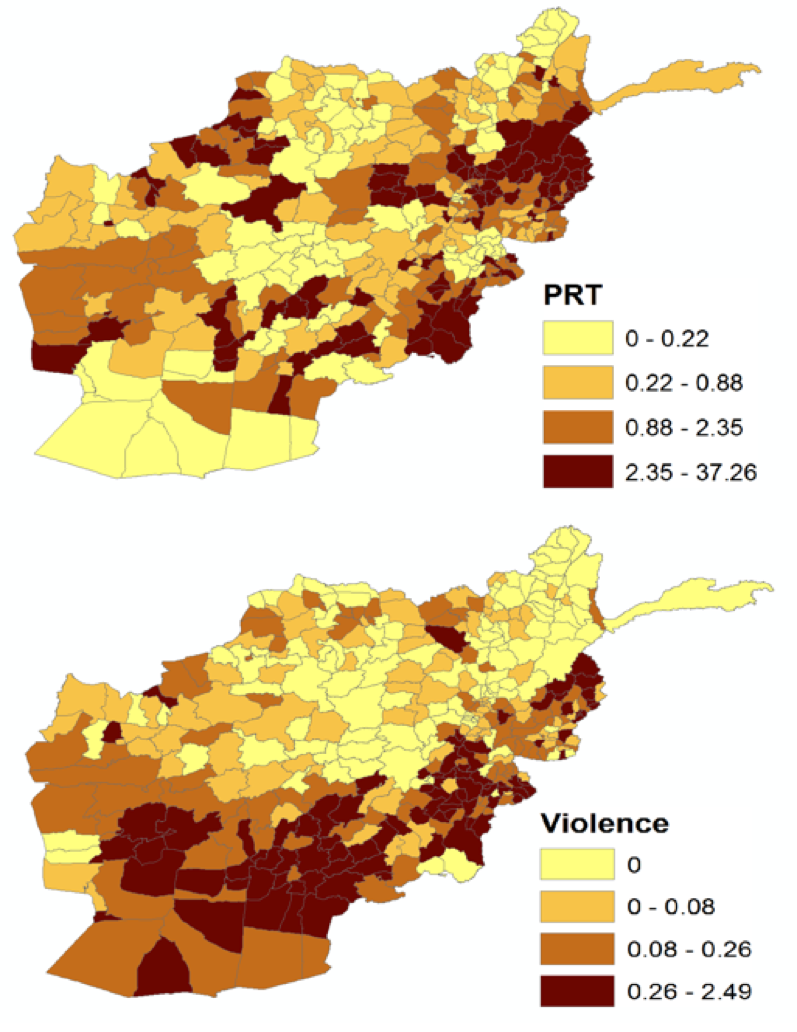 Notes: Map reﬂects mean rate of Provincial Reconstruction Team (PRT) projects underway, and mean rate of violence, averaged across 57 months for each of 398 districts. The measures are expressed in per capita terms, and scaled to the average district population. For comparison, an average-sized district is expected to witness 2.22 PRT projects, and incur 0.20 incidents of violence per month. The ranges provided in the legends are based on distribution quartiles.

The empirical strategy I adopt closely follows the seminal work of Berman et al. (2011) in measuring the impact of reconstruction programming on violence. I estimate a district-level fixed effects model, allowing for district-specific trends, and controlling for contemporaneous trajectories of violence. Moreover, the estimation controls for the overarching volume of total reconstruction activity, so the effect of interest is identified off marginal changes to its sectoral composition (focusing, in particular, on the relative volumes of health and education programming).

The gains from reorienting development from education to health

The results suggest that when foreign militaries deliver health services (building clinics, training nurses, and offering medical supplies), their efforts are met with an improvement to local security. But when those same foreign militaries administer education projects (building schools, training teachers, and providing learning materials), local conflict actually intensifies. The study suggests foreign militaries could attenuate insurgent attacks by 20%, on average, if they were to forego education projects by one standard deviation. These findings lend support to a theory placing political resistance rather than profit-seeking at the heart of insurgency. Further strengthening this interpretation, I find the gains of reorienting development from education to health would be even stronger in Afghanistan’s conservative South. In those provinces, the data suggests Afghans express antipathy towards international forces as a consequence of education programming.

In order to rule out alternative interpretations of these findings, I conduct many additional tests in the paper. As a check on opportunity cost and resource competition theories, I examine the impact of projects enhancing local economic activity, and enriching local infrastructure, respectively. Neither type of project is found to influence conflict in the short or medium run. Importantly, the key findings cannot be explained by reverse causation. Neither recent nor expected violence predict reconstruction programming, implying the selection of projects on district stability does not explain these results. Further, civil aid and time invariant district characteristics are accounted for as potentially confounding factors. Any remaining (time-varying) omitted variable must, at once, drive violence and differentially influence reconstruction programming across sectors. Because we are interested in the composition rather than the amount of projects, most intuitive concerns regarding endogeneity are not applicable once we control for the overall level of reconstruction activity in a district-month. Still, in the paper’s appendix I employ instrumental variables by exploiting military-base handovers as a source of exogenous sectoral spending. The results are also robust to this alternative identification strategy.2

Reassuringly, in this study the destabilising nature of education projects is restricted to military-led (rather than civil) aid. Accordingly, the paper by no means suggests a lack of demand for improved education services in Afghanistan. Rather, the study urges extreme caution when involving foreign military in the delivery of those services. Lastly, I do not suggest ideological perceptions are the only factor bearing on the success of programming. To the contrary, field interviews reveal plenty of reasons why reconstruction, and development more generally, can fail to produce peace, and even inflame local tensions. These include, but are not limited to, the level of corruption/leakage associated with development programming; relative programming levels in comparison to neighbouring districts; and elite capture of reconstruction contracts in communities with fractionalised power distributions. Going forward, these alternative channels remain largely unexplored, and could form the basis for exciting new empirical work in this area.

Editors’ note: This column first appeared on VoxEU.org, funded under the grant “Policy Design and Evaluation Research in Developing Countries" Initial Training Network (PODER), which is funded under the Marie Curie Actions of the EU's Seventh Framework Programme (Contract Number: 608109).

[1] Number of civilian deaths is aggregated across www.iraqbodycount.org and UNAMA (2016). Foreign troop deaths are calculated from icasualties.org.

[2] In the appendix, I also show the paper’s results are not driven by any individual region, nor by female-oriented projects (such as girls’ schools). As a further point of interest, there are no significant differences between the impacts of construction- and service-oriented projects.