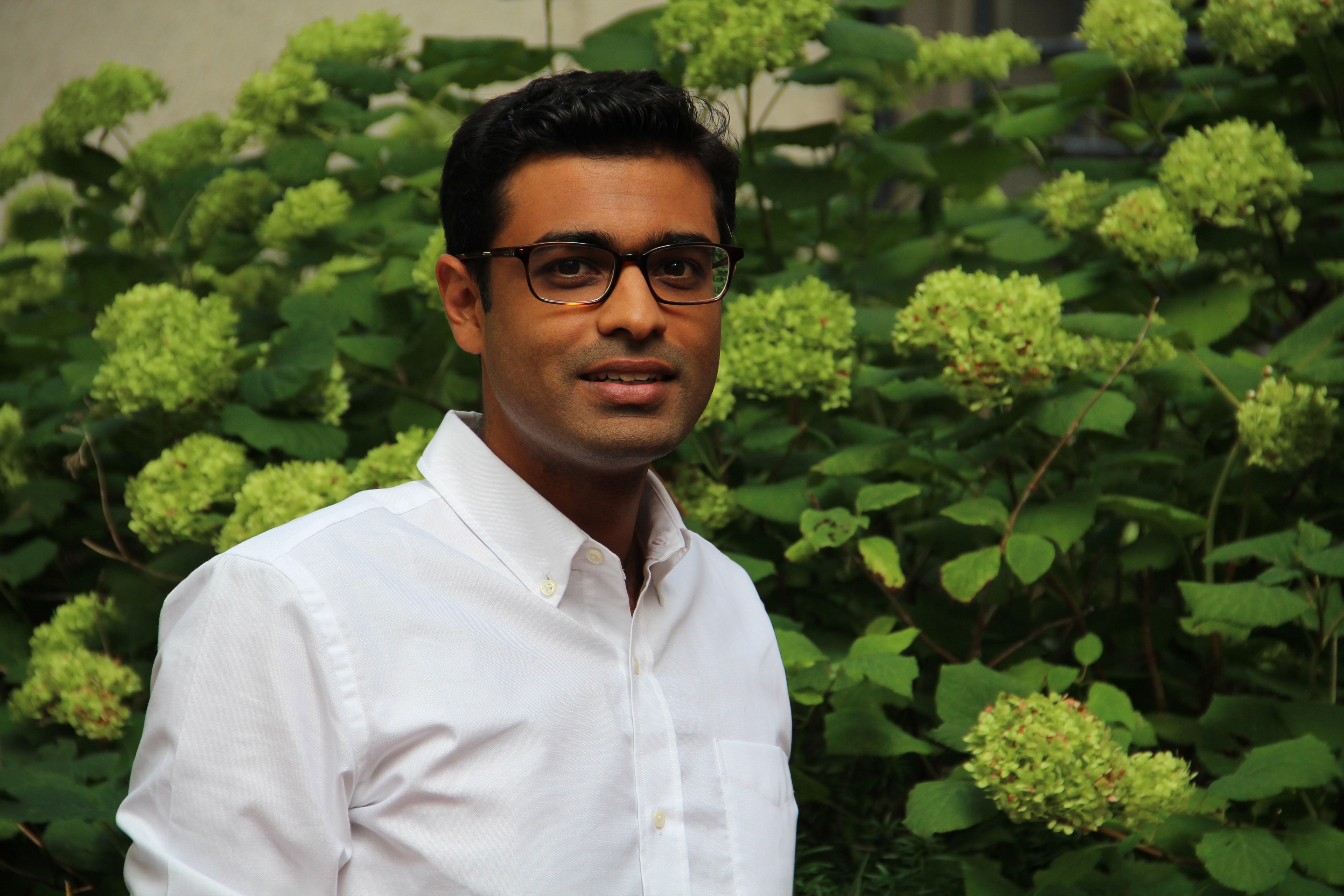 Analysing night-light intensity provides a complementary, alternative analysis of the intensity of economic activity in areas around urban markets

Urbanisation is a central feature of economic development. As countries grow, cities expand, often in chaotic ways, by absorbing labour and capital released from rural towns and villages. How to deal with the complex outcomes of urbanisation is a significant challenge for policymakers in the developing world.

Data an issue for measuring urbanisation

Remotely sensed data, including satellite imagery, offer a promising step to change how economists track urbanisation (Donaldson and Storeygard 2016). Economists have used satellite data on the intensity of light emitted at night to study economic growth and the distribution of economic activity at a one km resolution (Henderson et al. 2012, Henderson et al. 2018). Daytime satellite imagery is available at even higher spatial and temporal resolutions, down to 30-metre resolution at a biweekly frequency dating back to the late 1990s. After dealing with limitations of spatial data, economists now have access to data at previously unimaginable spatial and temporal resolutions. The challenge is how to translate high-dimensional spatial data into a form that generates insights for research and policy.

In "Detecting urban markets from satellite imagery: Evidence from India," we develop a method to process terabytes of satellite data into a unit of analysis that economists have long studied: markets. The method relies solely on public data (accessible via Google Earth Engine) and can be scaled across the globe. Our approach constructs markets as a set of contiguous, or near contiguous, pixels of economic activity based on night-time and/or daytime satellite imagery. The method builds upon Rozenfeld et al. (2011), who construct markets by clustering micro-level population data. A key limitation of that approach is the requirement of detailed (and low-frequency) population counts that are often difficult to obtain.

Satellite images of night-time lights are one source of data that indicates the presence of economic activity. Operationalising this definition using nightlight data requires choosing a minimum threshold of light intensity for the contiguous pixels. Following Rozenfeld et al. (2011), we experiment with buffers that combine contiguous sets of pixels if they lie within a radius of 1km, 2km, 4km or 8km. Having to choose a nightlight threshold to define a nightlight-based market immediately reveals a trade-off: a strict threshold only captures major urban agglomerations and lowering the threshold to include smaller cities comes at the expense of exploding the size of larger cities that have satellite towns. This trade-off is in part a consequence of the blooming effect of light, which tends to produce cities whose boundaries are too expansive and too smooth relative to the haphazard shape of actual cities.

We contrast the spatial extent of nightlight-based markets with those formed from high-resolution daytime satellite imagery. These data are available at much finer resolution than night-time light data but require image classification techniques to detect the spectral signature of a pixel. We examine data on built-up land cover from two publicly available layers developed using Landsat data: the MODIS layer (Channan et al. 2014) and the Global Human Settlements Layer (GHSL) developed by Pesaresi et al. (2015). We also examine a layer of built-up landcover for India that we developed in Goldblatt et al. (2018).

How daytime and nightlight imagery compliment each other

We find that landcover-based markets, irrespective of the data source, are realistically jagged in shape and reveal substantially more variation in the density of economic activity when compared to nightlight-based markets.

Figure 1 illustrates the results for the New Delhi metro area. It compares markets detected from daytime imagery (top row) against various nightlight thresholds (rows 2-5). The buffers increase across columns. Consider the 5th row, which detects all pixels above a nightlight value of ten. While this threshold captures satellite cities far from the city’s centre (e.g. Meerut), they are swallowed up, and the Delhi market explodes in size. As the threshold increases (move up the rows), Delhi takes its more familiar shape, but those definitions fail to detect the satellite towns. 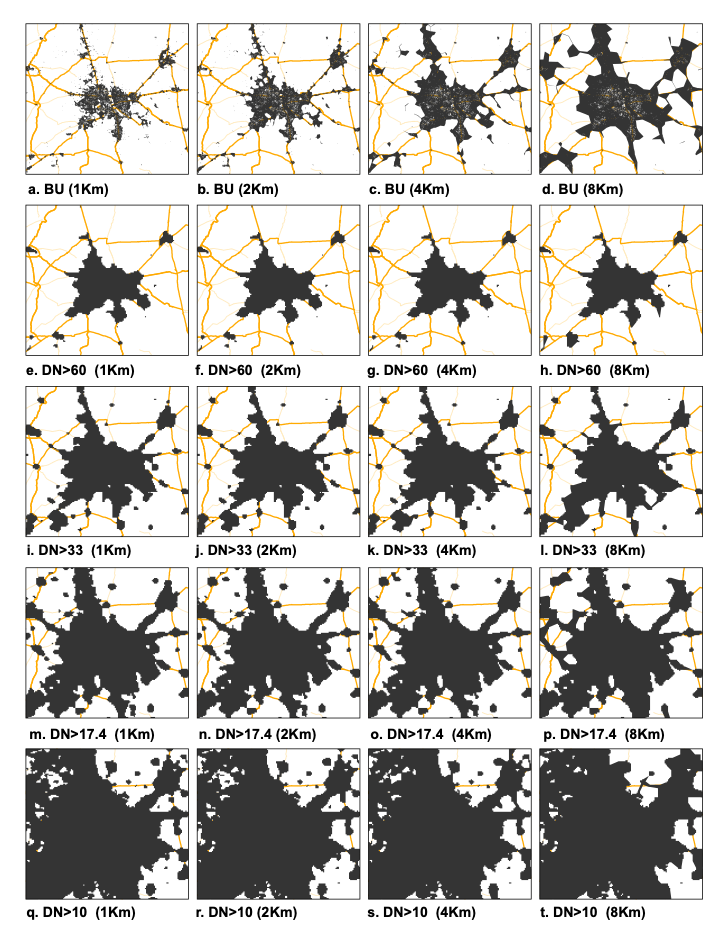 The top row illustrates the markets detected from daytime imagery and reveals several differences with respect to nightlight-based markets. First, the structure of markets is revealed to be jagged and uneven, unlike the smooth amoeba-like shape of nightlight markets. Second, we detect distinct neighbourhoods close to the city centre which shows the ability of daytime imagery to capture the evolution of the polycentric city. Third, the imagery delineates many distinct satellite towns that have formed around New Delhi. Across India, we can detect markets with an average nightlight intensity of just five, which suggests we can capture rural areas of India that do not have reliable access to electricity. While these areas could be observed by lowering the light-intensity threshold, this would come at the cost of vastly increasing the area of above-threshold contiguous pixels around India's large cities. Landcover-based markets are therefore able to capture small cities and towns in India while preserving the spatial distribution of activity of the largest cities.

To explore the potential to use these data to analyse spatial policies, we match our markets to India’s road network that is available through OpenStreetMaps. Landcover-based markets exhibit a sharp negative elasticity in size and nightlight intensity with respect to nearest-road distance: a landcover-based market whose nearest paved road is just two km away is roughly half as large as one with a road that bisects the market centroid.

Although much more work is needed, our research suggests that it may be possible to evaluate impacts of investments in infrastructure using satellite imagery. For many countries currently undergoing massive investments in transport networks, the arrival of such capabilities is well timed.

Donaldson, D and A Storeygard (2016), “The view from above: Applications of satellite data in economics," Journal of Economic Perspectives 30: 171–98.

Henderson, J, T Squires, A Storeygard and D Weil (2018), “The global distribution of economic activity: Nature, history, and the role Of trade,” Quarterly Journal of Economics 133: 357–406.