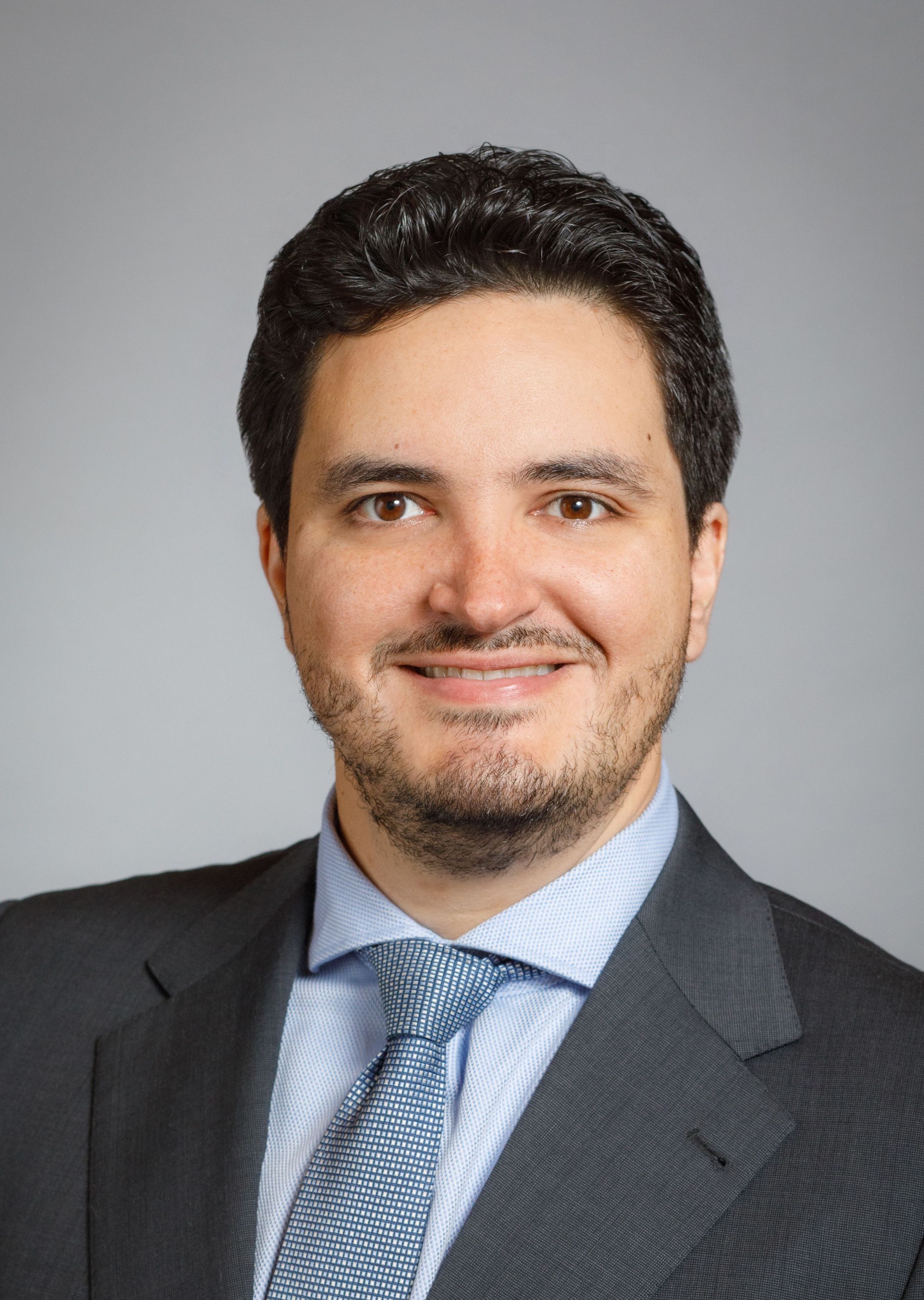 Literature on regional and ethnic favouritism has robustly shown that, on average, autocrats tend to favour their supporters in the distribution of rents and public goods (Franck and Rainer 2012, Hodler and Raschky 2014, Dickens 2018, De Luca et al. 2018). While these findings are often attributed to leader preferences, it is not obvious that in-group favours are strategic for regime-resilience. While favouring supporters may help retain their backing (Padró-i-Miquel 2007), favouring opponents could prevent the spark of a revolution (De Nardo 1985). Concerns over regime stability could magnify during periods of economic duress with critical junctures leading to broad economic grievances against the regime, just as the resources to appease such grievances dwindle.

In my job market paper (Morales-Arilla 2022), I investigate how autocrats’ distributive strategies change during economic downturns. I derive my hypotheses from a simple model of citizen protests, where citizens are divided between regime supporters and opponents, and their decision to protest is driven by their experience of economic and political grievances. While political grievances are greater for the opposition, shared economic grievances are imposed by a common economic shock. Protests are also costly due to the possibility of repression and retribution.

This helps frame thinking about the incentives of the regime, which enjoys rents from staying in office that are affected by the economic shock and faces regime expenses in both repressive capacity and targeted appeasement transfers. The regime will stay in office in the absence of dissent but may be overthrown if citizens protest. Survival depends on the scope of protests: while a broad revolution would lead to regime change, the outcome if only one citizen group protests is uncertain. To avoid a broad revolution, the regime needs to balance the prospects of either inducing both groups to abstain from protesting (‘full appeasement’) or allow just one group to take to the streets (‘partial appeasement’). If repression is costly, the regime will also need to respond with targeted transfers. An opposition holding political grievances makes appeasement more costly and, therefore, they would enjoy a higher transfer under a full appeasement strategy, but they would be excluded and repressed under partial appeasement.

The key trade-off for the regime is that the certainty of full appeasement comes at costs that grow disproportionately during economic shocks. Hence, as shocks worsen, regimes switch their strategies from full to partial appeasement. The model’s main hypothesis is that, as economic shocks worsen, patterns of supporter-oriented favours and repression of opposition protests should become more prevalent. I test this using data from two different contexts.

The Venezuelan blackouts of 2019

I test the predictions of the model focusing on the case of the Venezuelan blackouts of March 2019. After five years of drastic impoverishment and democratic erosion, these week-long blackouts hit the country’s economy suddenly. Most importantly, the blackouts occurred in the middle of a constitutional crisis that threatened the survival of the Maduro, regime which was forced to ration electricity supply in response to the blackouts. 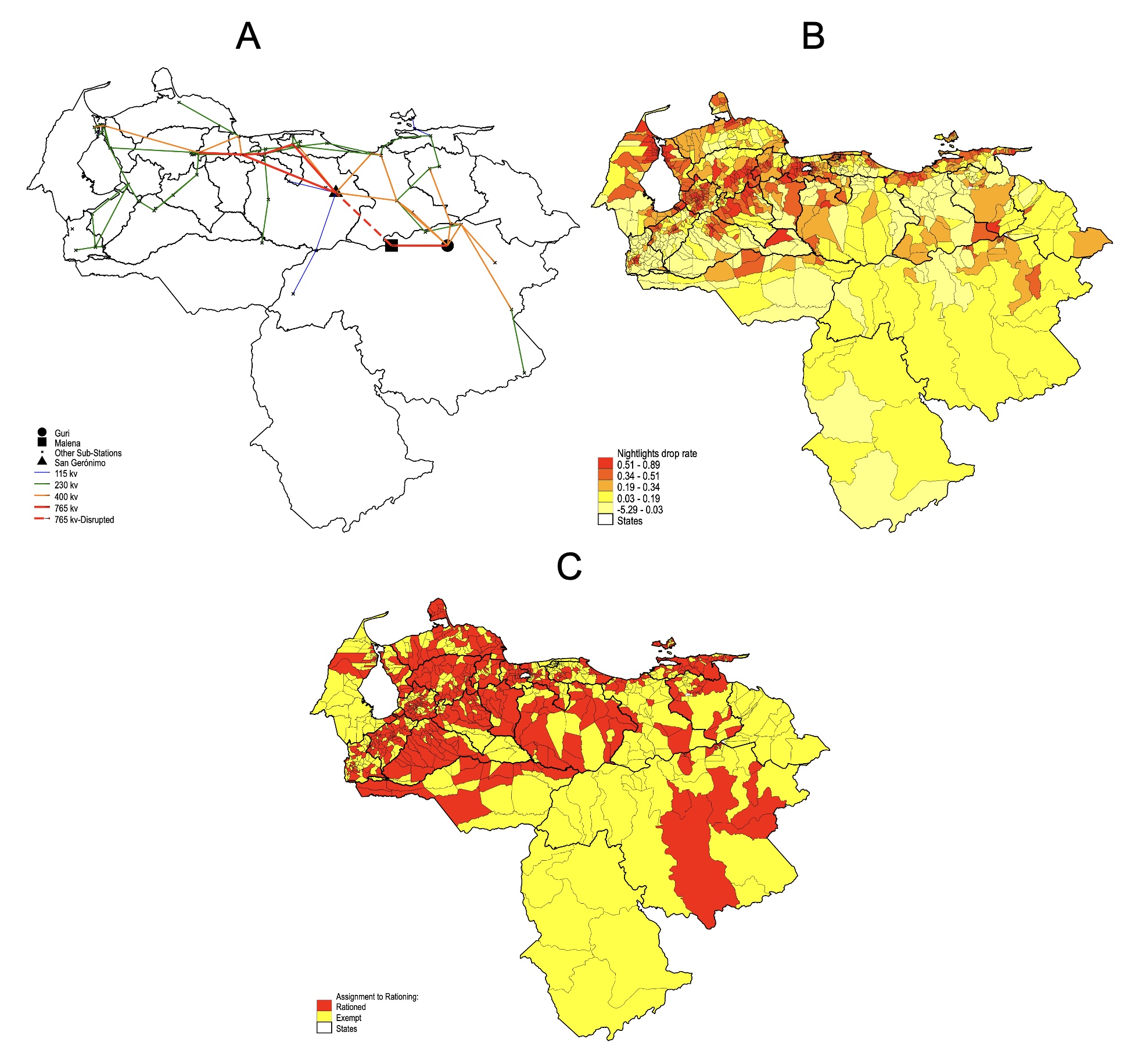 Notes: North-western Venezuela was the most affected by blackouts and power rationing, while the south was mostly spared by both.
Source: NASA’s Black Marble product suite, Venezuela’s Ministry of Energy and Author’s Calculations.

The maps in Figure 1 show that north-western Venezuela was most affected both by the blackouts and by later power rationing. This is expected for technical reasons, as the disruption to the power grid occurred in the high-capacity transmission lines connecting hydropower generation dams in south-eastern Venezuela to the north-west of the country. Nevertheless, Figure 1C clearly shows how Caracas – the capital of the country – was fully spared from power rationing despite being affected by the blackouts, which suggests that political considerations also influenced the rationing choices of the Maduro regime (Ades and Glaeser 1995).

I evaluate whether the intensity of the blackout magnifies patterns of favouritism towards supporters in the regime’s rationing choices. To do so, I estimate a linear probability model in which local power rationing is explained by the intensity of the blackout, the baseline level of electoral support for the regime, and their interaction. Similarly, I estimate a difference-in-differences model that explains the growth in local protests after the blackouts as a function of these same variables. Consistent with the model, Figure 2 shows that the effects of the blackouts on increased power rationing and protests are weakest for regime supporting areas of the country. From the perspective of the model, this would suggest that the Maduro regime limited its supporters’ exposure to further power cuts to attenuate the scope of protests that came because of the blackouts.

A) Marginal effect on rationing probability 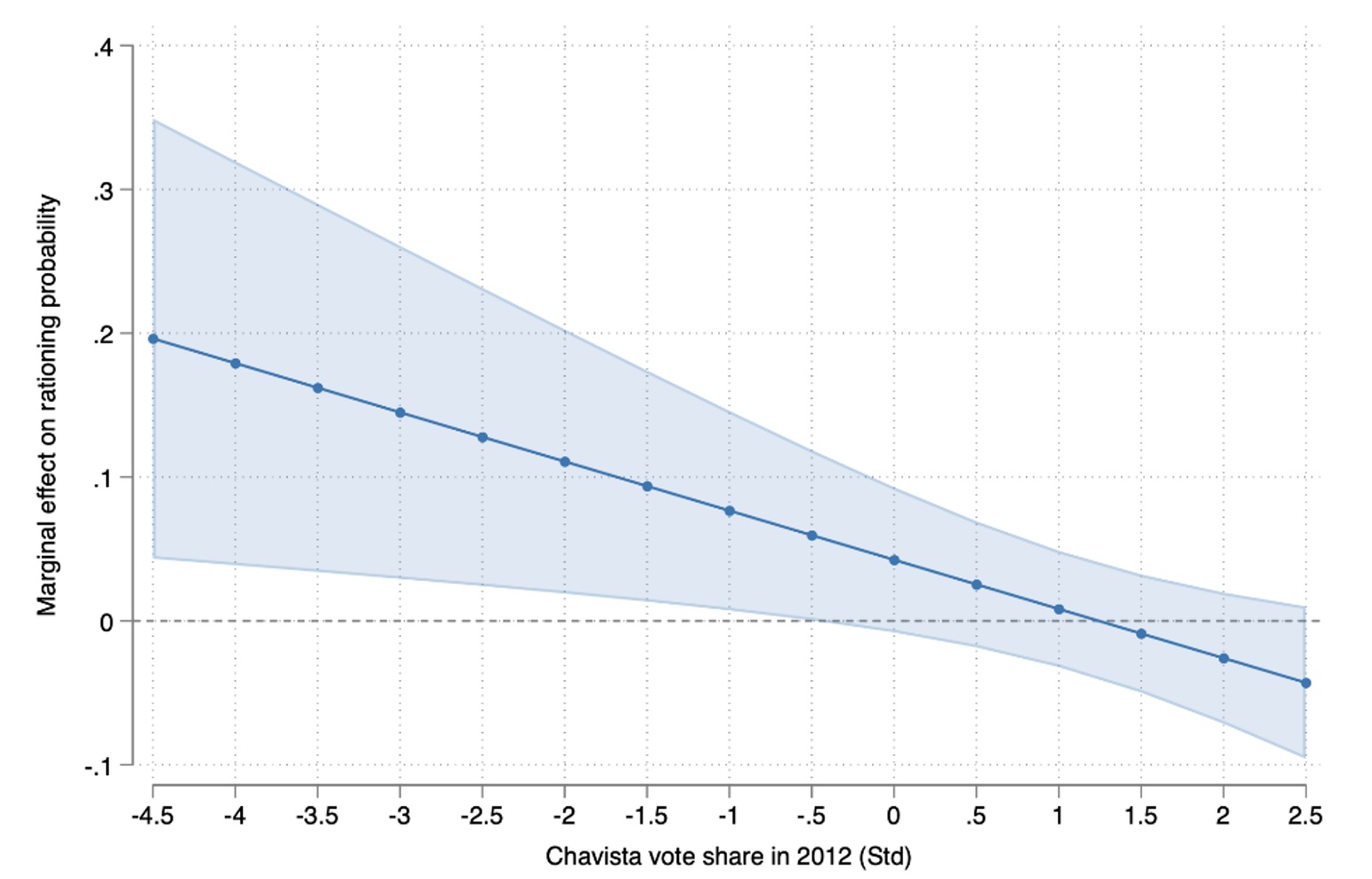 B) Marginal effect on protests 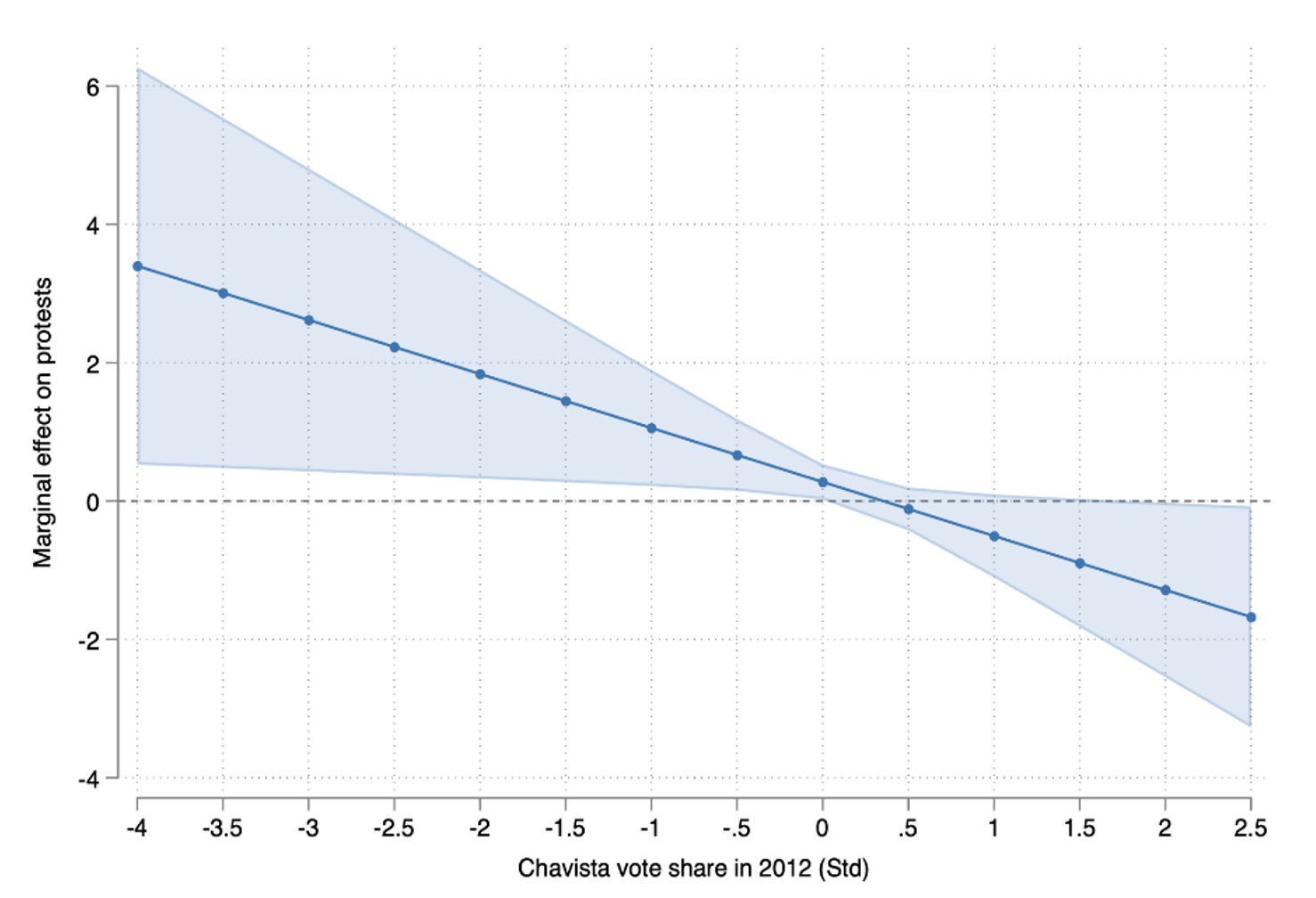 Note: The rationing probability and the incidence of protest was highest in opposition areas.
Source: Author’s calculations.

I also assess how national droughts in sub-Saharan Africa affect observed patterns of ethnic and regional favouritism (Frank and Rainer 2012, Dickens 2018). The region’s relative reliance on rain-fed agriculture makes it particularly vulnerable to these exogenous weather events, which have been shown to affect both the prevalence of conflict (Miguel et al. 2004) and the probability of regime change (Bruckner and Ciccone 2014).

I compare the birth regions of country leaders each year to other regions. Leveraging night-time lights data as a proxy for local economic development, I evaluate whether the difference in luminosity in favour of leaders’ regions grows during years with unusually low national rainfall. Similarly, I collect local data on protests from the Global Database of Events, Language, and Tone (GDELT) to evaluate whether the spark of dissent after a drought concentrates away from leaders’ regions. Figure 3 show that both predictions hold on the data. From the perspective of the model, regimes engage in further favouritism during droughts to limit dissent.

Figure 3 Impact of leaders’ origin on nightlights and protests

A) Marginal effect of leader's origin on nightlights 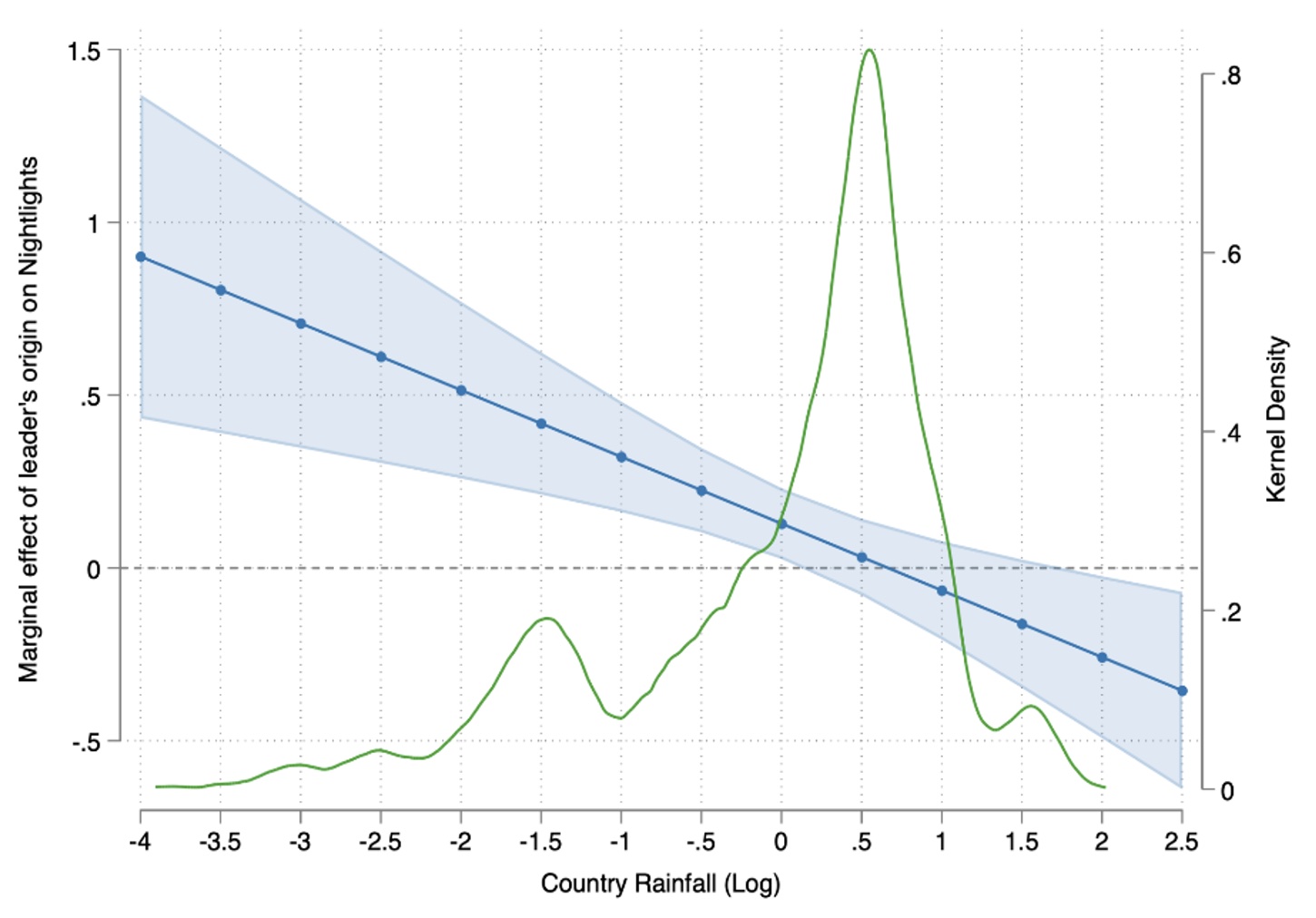 B) Marginal effect of leader's origin on protests 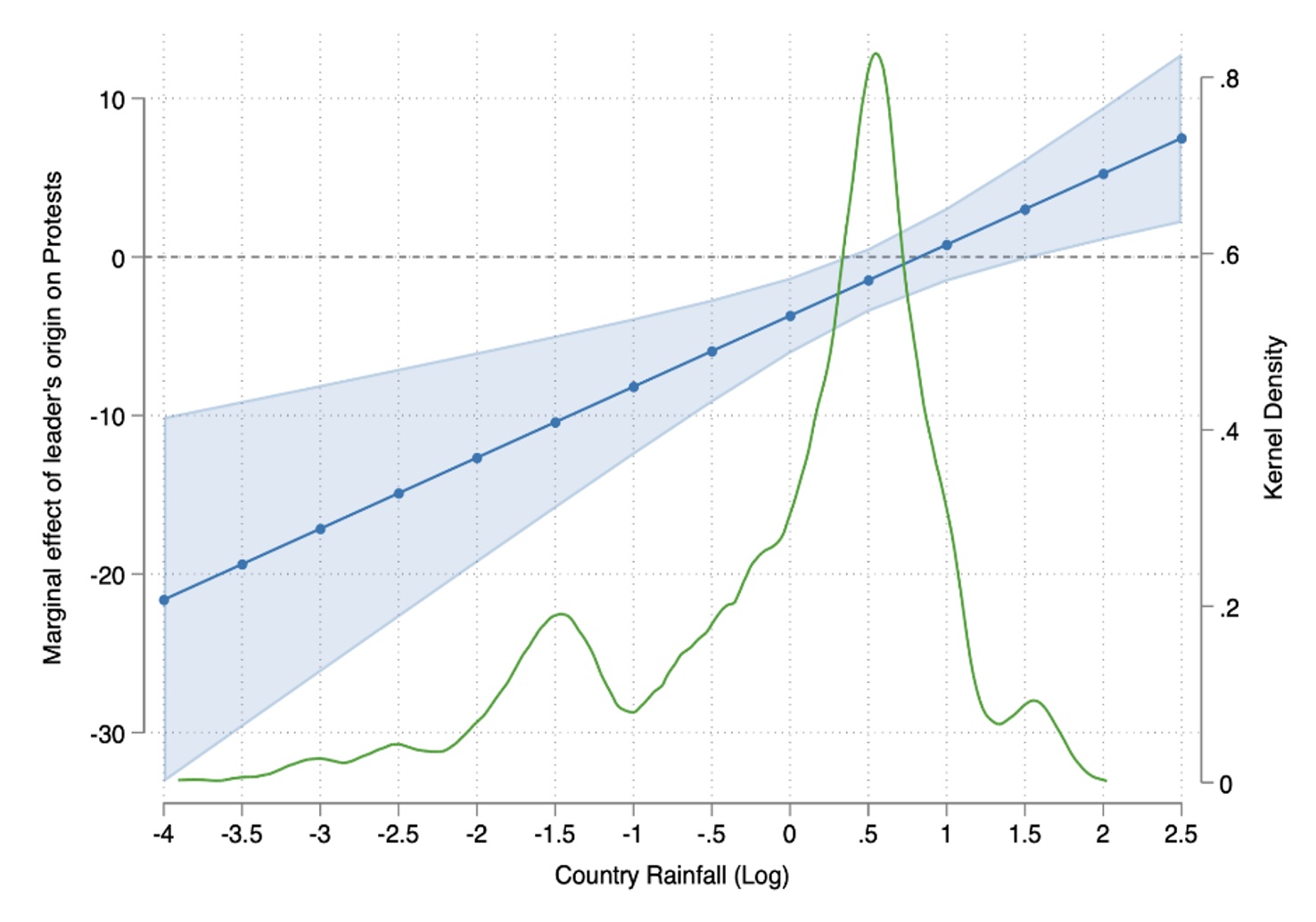 Notes:  Nightlights increase in leaders’ regions during times of low national rainfall while the probability of dissent after a drought concentrates away from leaders’ regions.
Source: Author’s calculations.

The importance of these findings in our turbulent times

The last few years have been marked by massive economic shocks around the world. Both the pandemic and the invasion of Ukraine have led to drastic price increases for basic goods and staple foods. Moreover, the growing prevalence of extreme weather events underscores the threat of climate change as a latent source of shocks. Looking into the future, we need to consider the political and institutional implications of our responses to these increasingly common and destructive events. The discussion above suggests that autocrats may have political incentives to further discriminate against and repress opposition groups in their response to economic shocks. As we scramble to support the recovery of affected areas as a global community, inattention to the governance over the distribution of emergency resources may inadvertently render our efforts not only ineffective, but even possibly counterproductive.