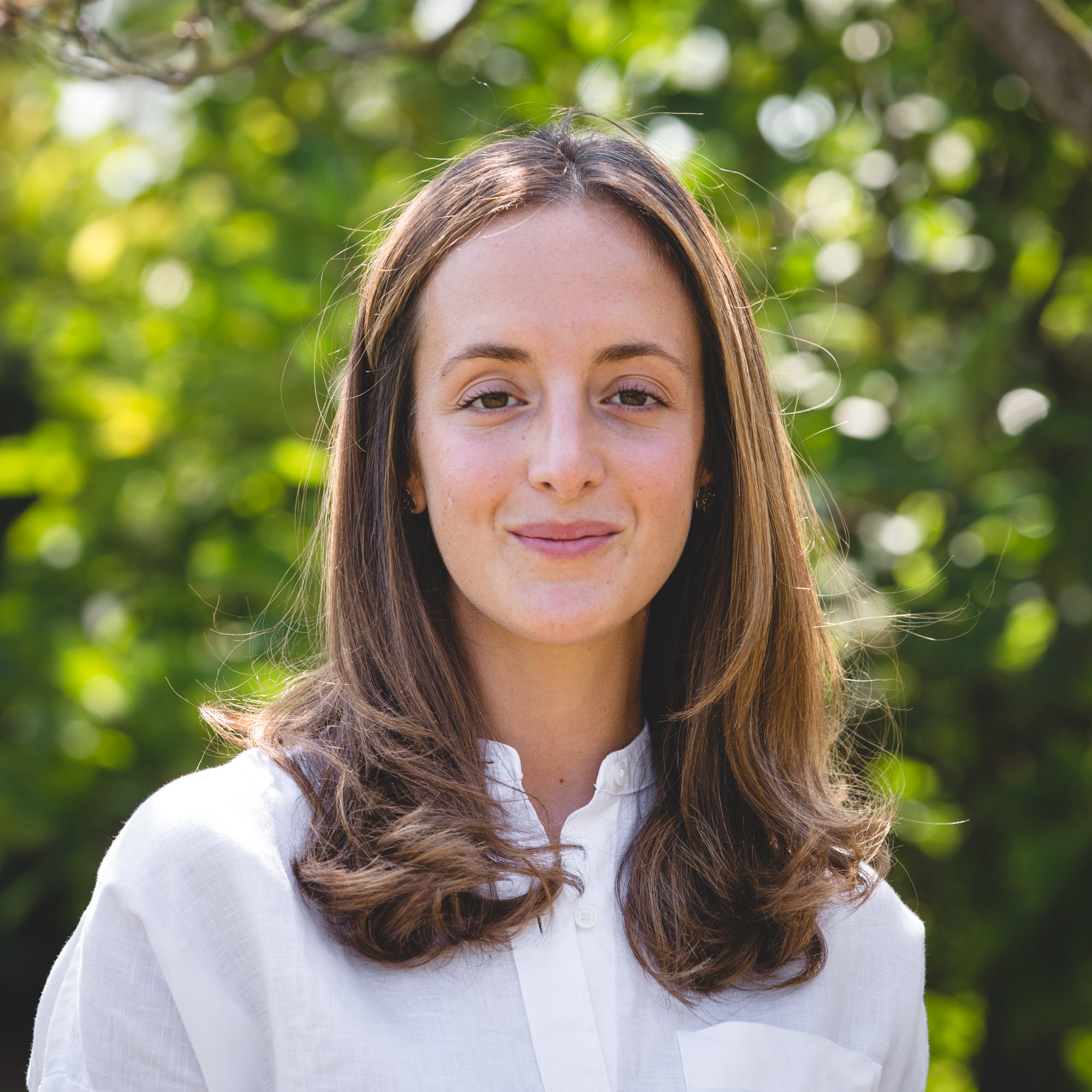 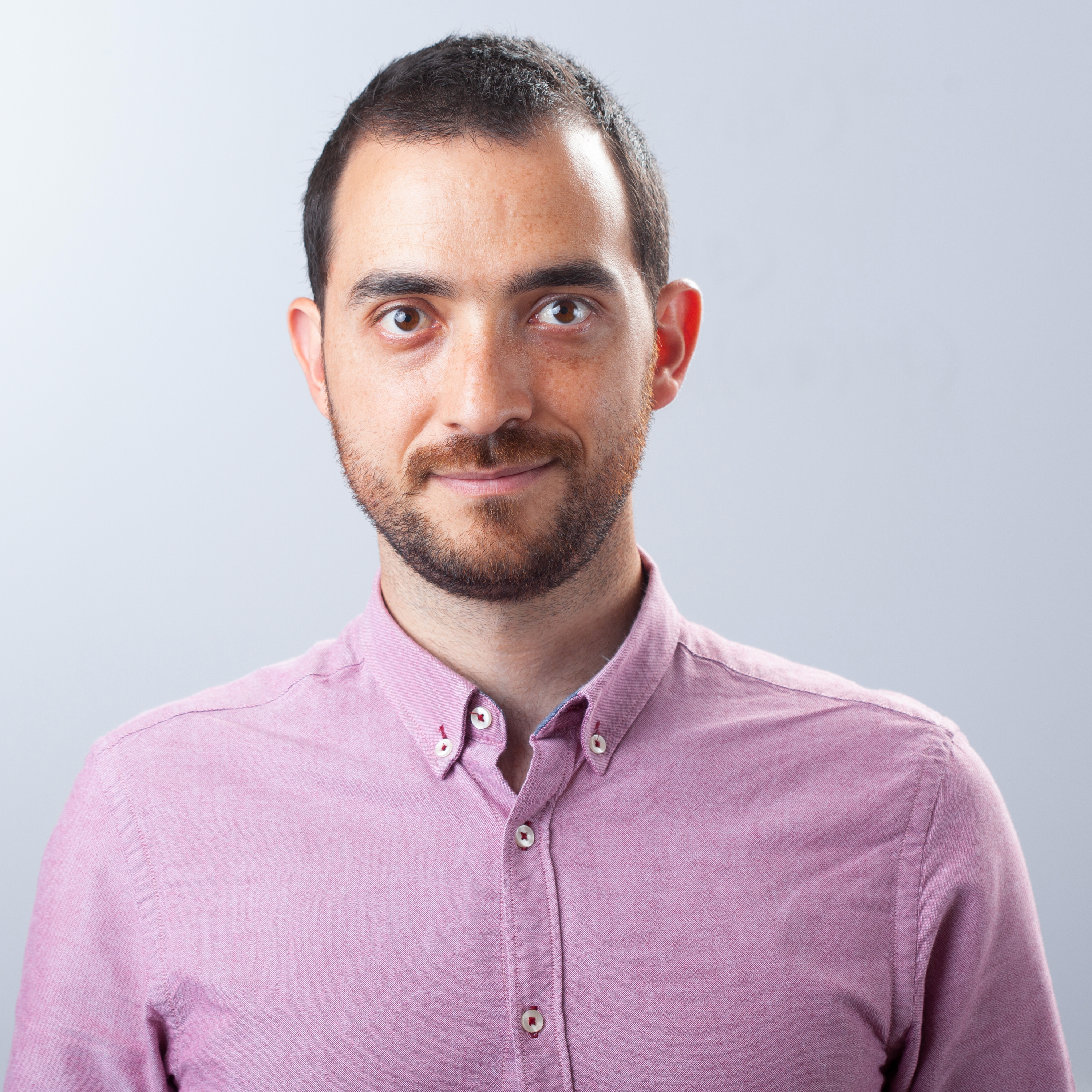 Government overspending has long attracted the attention of academics and policymakers (Yared 2019). One source of concern relates to organisations in the public sector lacking strong incentives for efficiency in public administration. For example, a recent IDB report on Latin America and the Caribbean estimated that waste in procurement, civil service, and targeted transfers amounted to 4.4% of GDP – an amount comparable to what countries in the region spend on education or health (Izquierdo et al. 2018).

Fiscal rules that set a numerical target for government spending offer a potential solution to this problem and are currently in use across both the developed and developing world, at national and sub-national levels (Grembi et al. 2016, IMF 2017). However, their effectiveness, political feasibility, and downstream impact on public goods remain unclear. Regarding effectiveness, fiscal rules may prove unsuccessful due to weak enforcement or creative accounting. On the political side, electoral backlash could make policymakers unwilling to introduce or enforce them. Moreover, the broader desirability of fiscal rules crucially depends on the extent to which they negatively affect public goods and living standards.

In recent research (Carreri and Martínez 2021), we study a sub-national fiscal rule introduced in Colombia in 2000. This rule was the national government’s response to a growing fiscal imbalance associated with the country’s decentralisation process from the early 1990s. The rule set a cap to the operating expenses of municipal governments, expressed as a share of their current revenue. For the municipalities in our sample (90% of the total), which are smaller, less developed, and have a homogeneous institutional structure, this cap was set at 80%. Compliance with the rule is determined every year by the country’s fiscal watchdog agency and non-compliers face disciplinary sanctions from the Inspector General’s office. They also lose access to financial assistance from the national government.

Current revenue includes local tax revenue, fees and fines, and some formula-determined intergovernmental transfers. This is the denominator of the fiscal outcome targeted by the rule, which we refer to as the ‘overspending indicator’. Operating expenses (i.e. the numerator) include remuneration of administrative staff, general expenses such as procurement, rent, maintenance, travel, and training, as well as pensions of former employees and payments dictated by court sentences. Importantly, all expenses associated with local public goods (education, health, water, sanitation, culture, etc.) are classified as investment and fall outside the scope of the regulation. Hence, our setting provides a unique opportunity to study the possibility of reducing the size of the public administration without directly affecting public goods provision.

Even though the fiscal rule affected all municipalities de jure, only those with operating expenses exceeding the cap at the time of the reform were exposed to it de facto. Our research design exploits this variation in exposure and examines whether municipalities affected de facto by the fiscal rule experienced disproportionate changes in our outcomes of interest after the reform. These outcomes include fiscal variables, various measures of public goods and living standards, as well as electoral support for the local incumbent party and incidence of protests.

Figure 1 plots the distribution of the overspending indicator for selected years in our sample period. After the fiscal rule came into effect in 2001, the distribution compressed and shifted leftward, with a decreasing share of municipalities exceeding the cap over time. 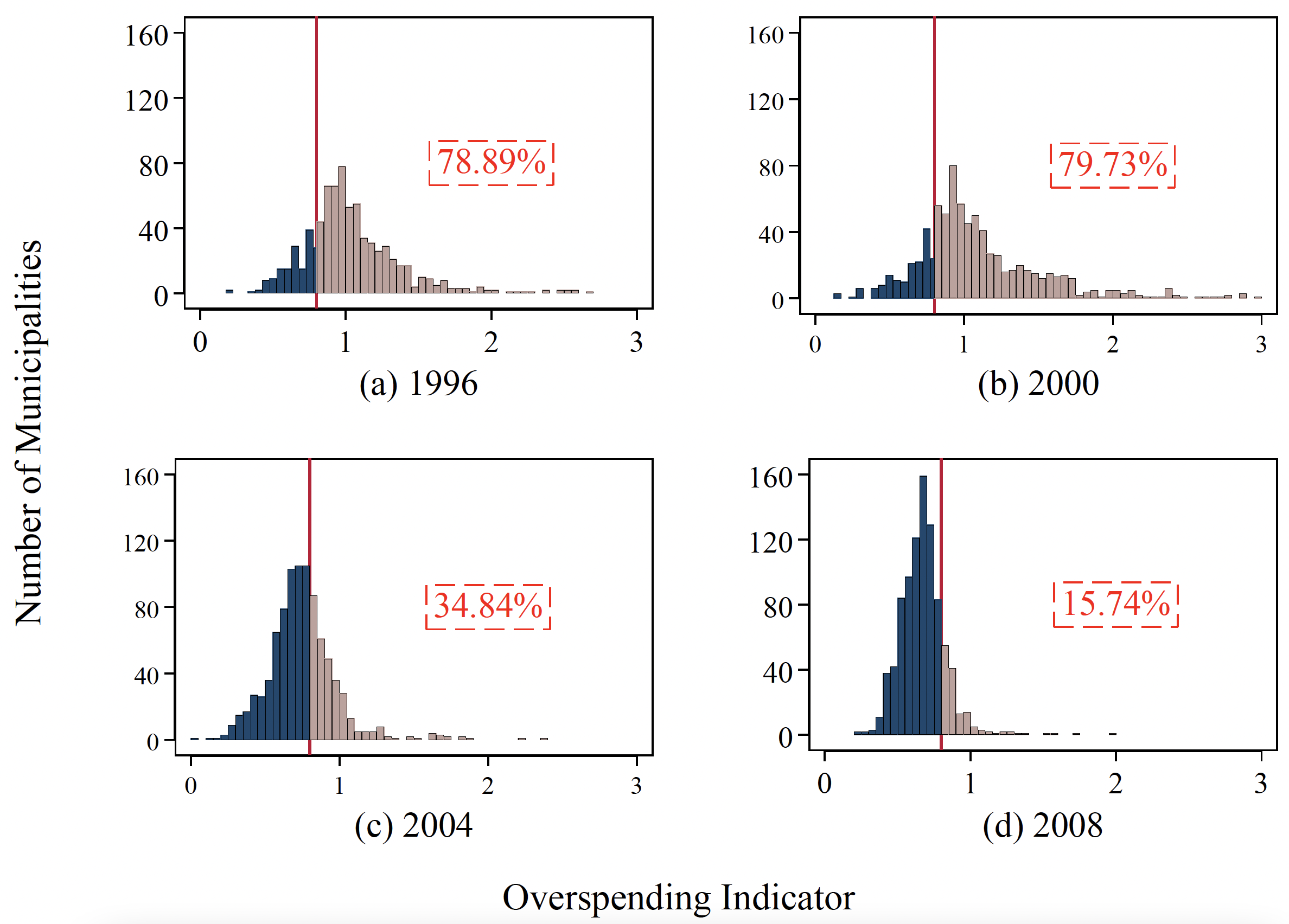 Figure 2 provides complementary evidence from our regression analysis. On average, municipalities affected by the fiscal rule experienced a 32 percentage-point decrease in the overspending indicator (panel a) and a same-sized decrease (-32 percentage points) in the probability of current deficit (panel b) after 2000. The latter is equivalent to a 50% reduction relative to the average probability of a deficit before the reform. 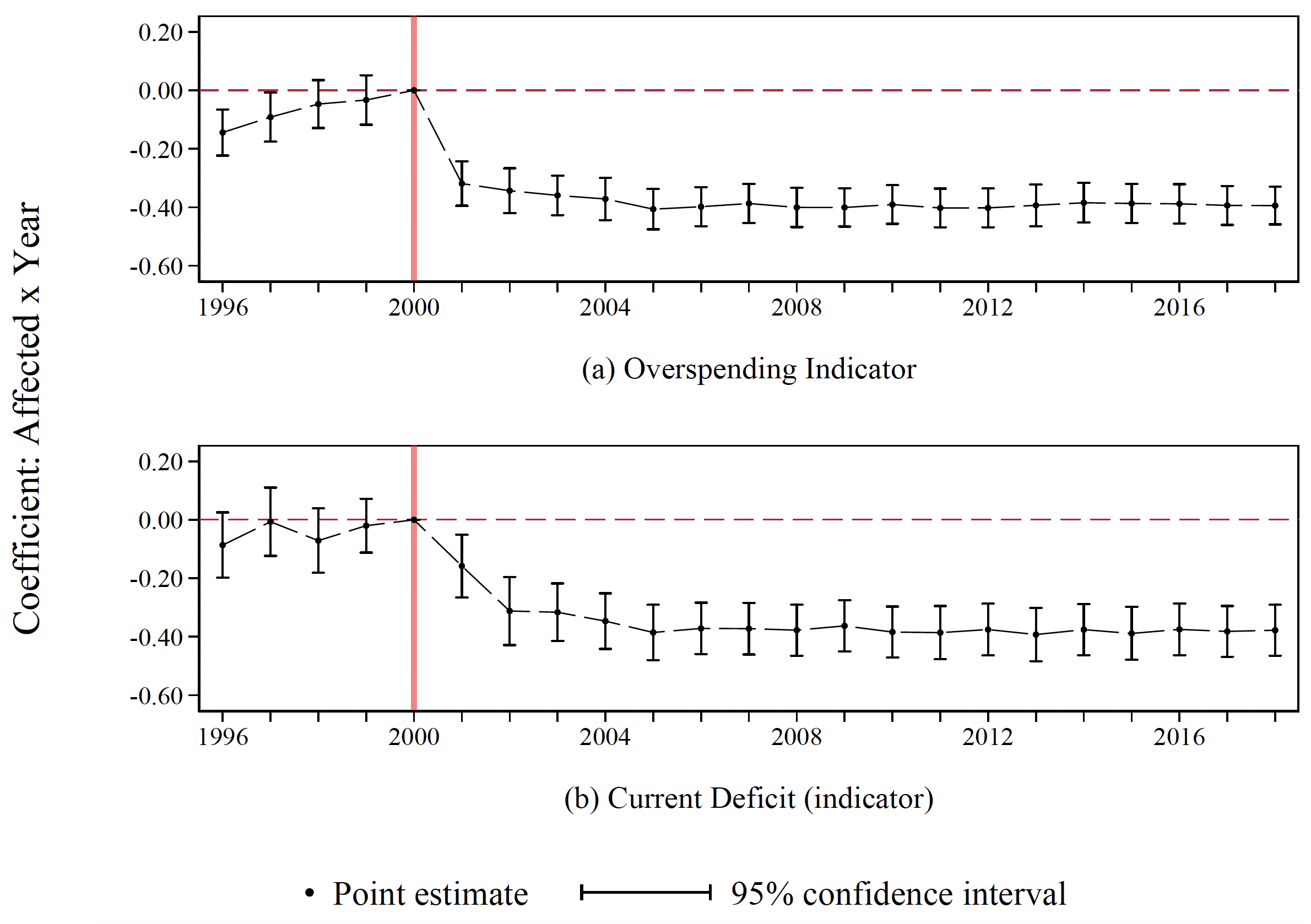 Additional analysis of the fiscal variables yields two main findings. First, the reduction in the overspending indicator is driven both by cuts in operating expenses and increases in local revenue, with the effect on spending being much larger. Second, there is no change in capital revenue or capital spending (i.e. investment). This suggests that governments did not strategically respond by shifting operating expenses into the capital account. It also suggests that local public goods were not affected, which we confirm using a battery of different measures.

The fiscal rule did not affect public goods or living standards

We find no evidence of change in measures of governance or local living conditions in affected municipalities after the reform. These include: (i) night-time luminosity as a broad measure of economic activity (Henderson et al. 2012); (ii) measures of corruption based on granular data on sanctions from the fiscal watchdog; (iii) incidence of conflict; and (iv) multiple measures of health (for example,  share of the poor with subsidised health insurance and the share of newborns with low birthweight) and education (for example, number of schools, teachers, or pupils). Figure 3 shows the estimated effects for some of these outcomes, with no evidence of change after 2001. This suggests that both the quantity and quality of public investment were left unaffected. The null result on corruption stands in contrast with previous findings for Italy by Daniele and Giommoni (2020), arguably because corruption is more prevalent in public investment, which remained unchanged in our setting. 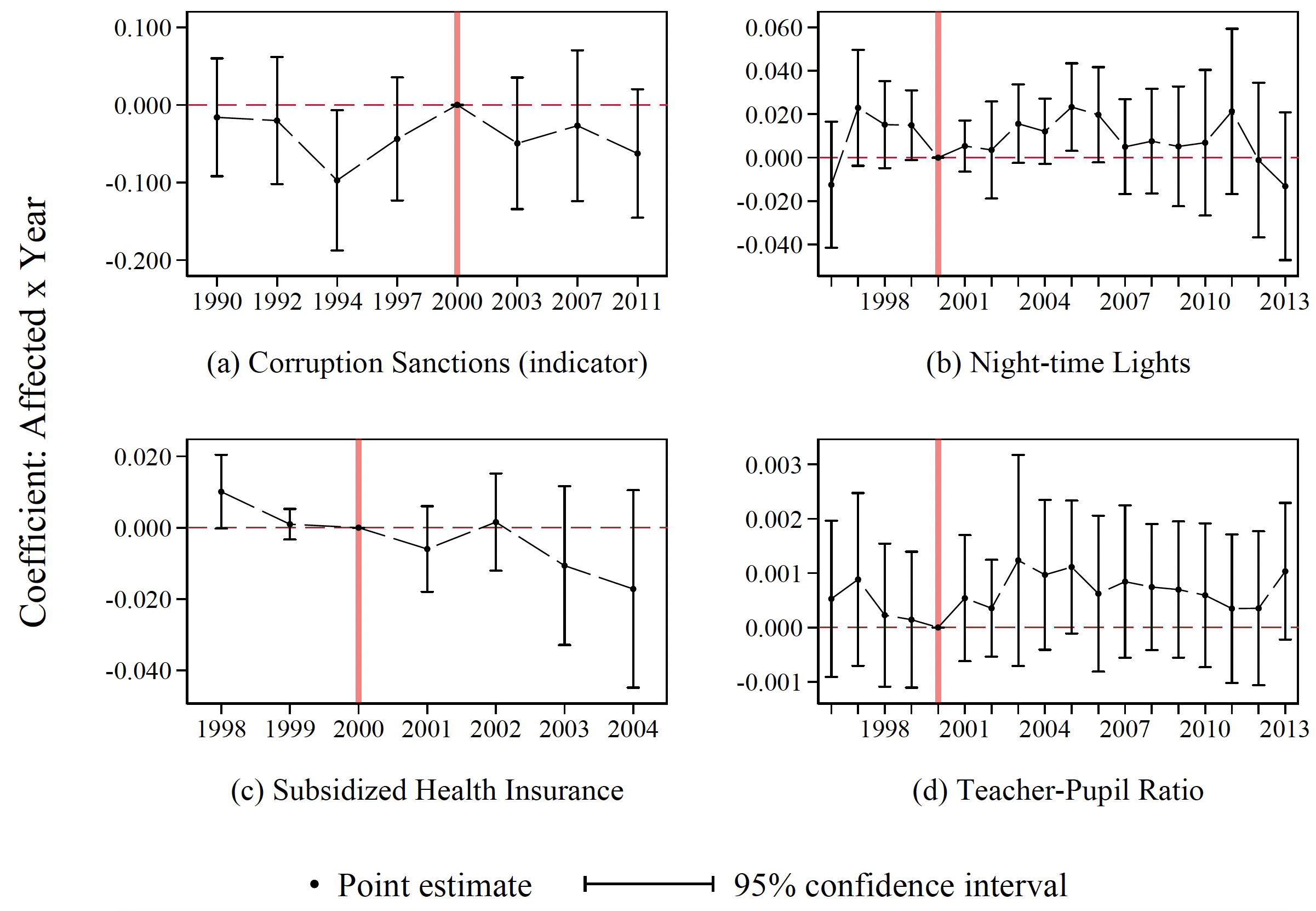 In Colombia, mayors face a one-term limit, meaning there are weak incentives for good performance, and political parties have a limited ability to monitor their behaviour. As a result, incumbents frequently fail to provide satisfactory results to voters and incumbent parties are, in fact, relatively less likely to win again (Klasjna and Titiunik 2018). If overspending in public administration is part of what upsets voters, the fiscal rule should lead to an increase in electoral support for the incumbent party. That is exactly what we find in Figure 4, which plots the relative change in the vote share for the incumbent party (panel a) and its probability of re-election (panel b). 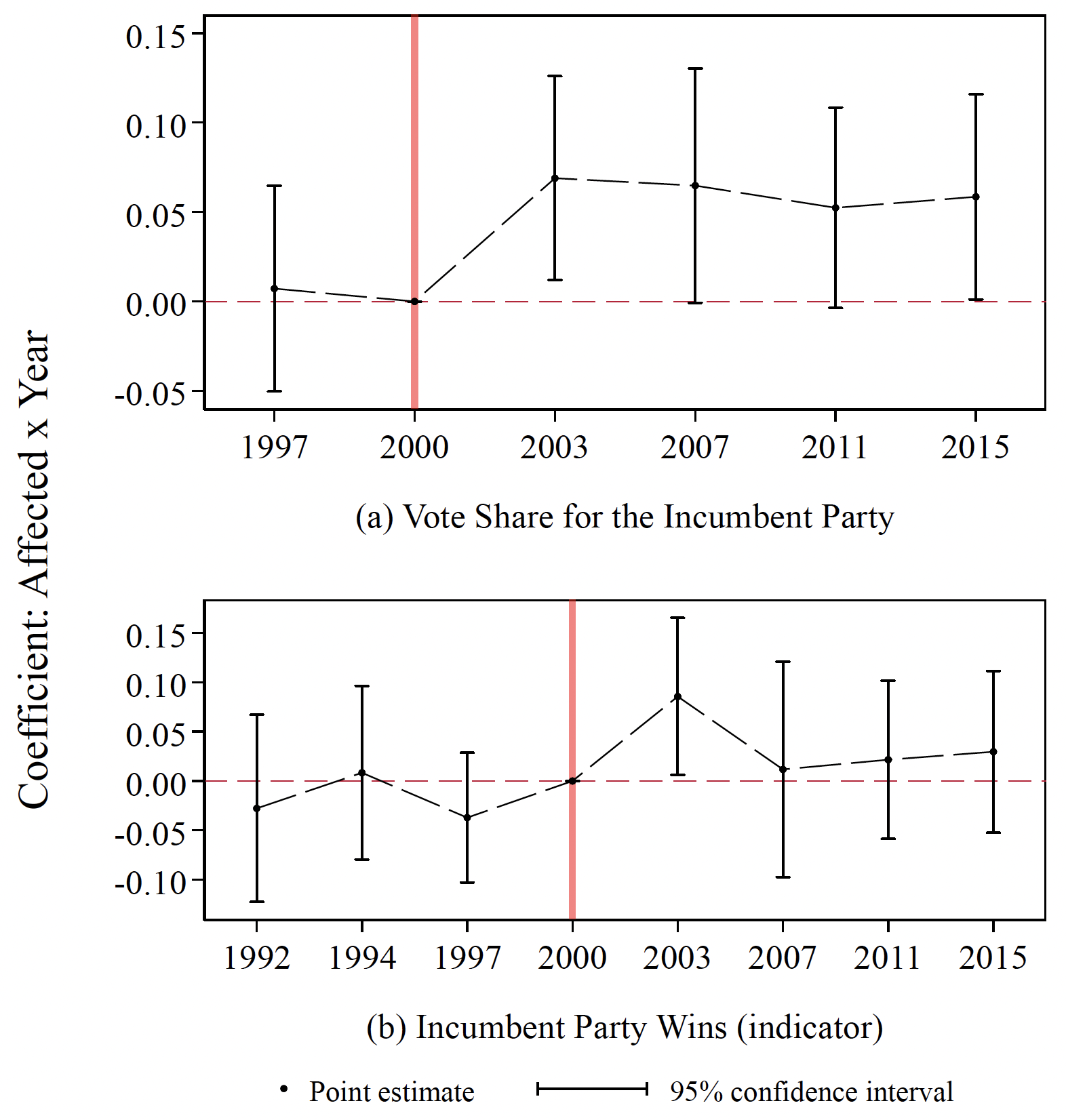 Using a detailed event-based dataset, we further find that the probability of protests against the municipal government experiences no robust change. This confirms the absence of significant political backlash against the fiscal adjustment caused by the reform. These results stand in contrast with previous research linking austerity policies in the UK with the Brexit vote in 2016 (Fetzer 2019), arguably because those policies significantly affected social spending.

Why did fiscal rules work in Colombia?

To conclude, we provide three suggestive reasons for the success of the sub-national fiscal rule in Colombia. First, compliance can be easily determined based on readily available information. Second, enforcement relies on complementary efforts by several agencies of the national government, who is effectively the residual claimant on sub-national deficits and thus has a strong incentive to enforce the rule. Moreover, municipal governments lack the necessary political leverage to thwart enforcement. Third, the resulting reduction in public spending was popular with voters because it reduced government operating expenses without affecting local public goods. This is in line with findings from surveys on preferences for austerity (Ardanaz et al. 2020, Bansak et al. 2021).

Izquierdo, A, C Pessino and G Vuletin (eds) (2018), Better Spending for Better Lives: How Latin America and the Caribbean Can Do More with Less, Development in the Americas Report, Inter-American Development Bank.