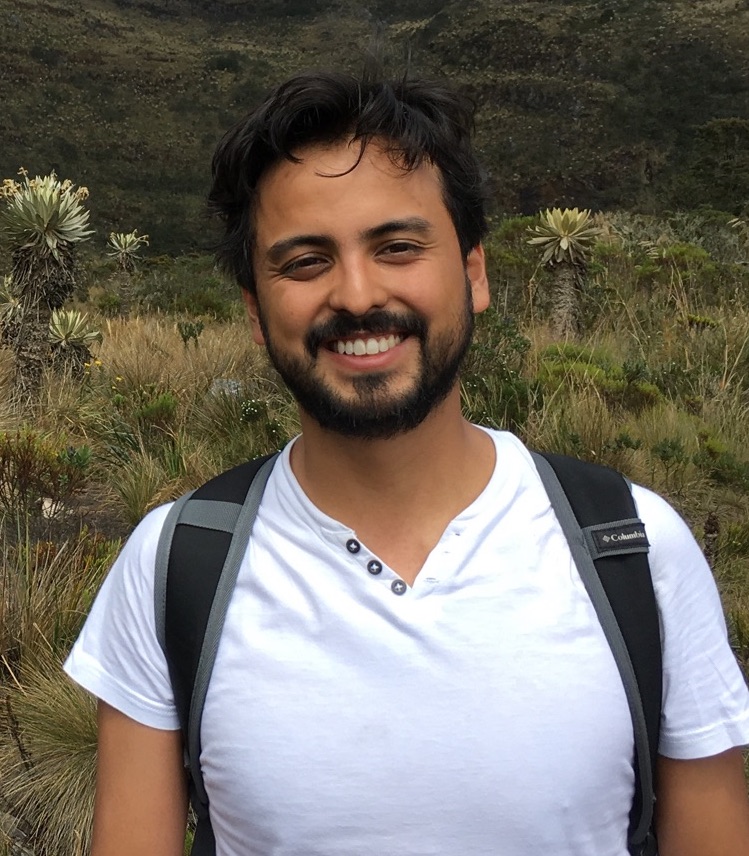 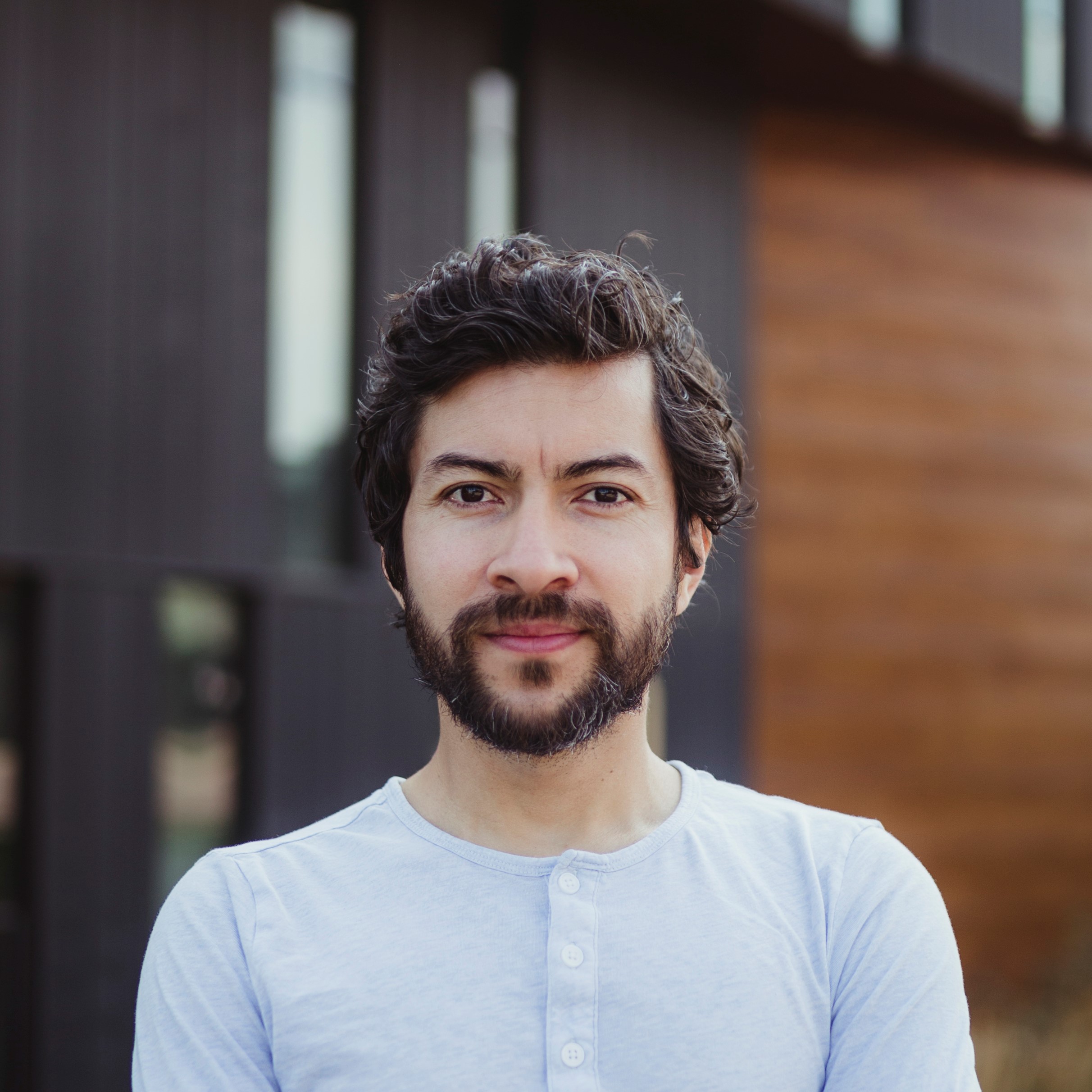 The Colombian government used roads as a token of exchange for legislative support, sparking debates about the proper handling of public resources

Democratic leaders face the challenge of allocating limited public resources among competing jurisdictions. Governments often allocate these resources non-programmatically (Cruz and Keefer 2015) and with various goals in mind. These goals can include favouring their hometowns (Do et al. 2017) and parties (Brollo and Nanniccini 2012), targeting electorally important areas (Arulampalam et al. 2009), or advancing legislative agendas (Alston and Mueller 2006). However, the political negotiations underlying these allocation decisions are often hidden from the public, making it difficult for economists and political scientists to study these decisions. Furthermore, political deals hidden from public view may undermine democratic norms, especially in developing countries and places with high corruption levels or poor governance.

The case of Colombia

In 2013, Colombian news media ‘leaked’ a spreadsheet that revealed road construction projects which were assigned to individual legislators. In Colombia, this disbursement of benefits has been colloquially called ‘mermelada’, or ‘jam’. While critics of the government asserted that this was evidence of clientelism and corruption, the government claimed these deals were not uncommon in politics and were a way of bringing investments to the different regions of the country (Figure 1). However, the process by which these assignments were made and the nature of the arrangements were never clear. In a forthcoming article (Bonilla-Mejía and Morales 2021), we exploit this media leak to study the non-programmatic and hidden exchange of public resources for legislative support.

Translation: (Left) Santos’ corrupting jam fails because it stays in the pockets of congressmen and their contractor friends, and never reaches the community. (Right) That which they call ‘jam’ from the interior [of the country]… that is quality of life for people gentlemen, those are works and investments for development.

To investigate this case, we first developed a theoretical model of ‘jam’ in which political leaders use targeted benefits to sway legislators in favour of their political agenda. One important feature of the model is that some legislators like ‘jam’ more than others. In the context of Colombia, legislators from remote regions would benefit more from ‘jam’, firstly because these road projects could have larger impacts in these regions, but secondly – and more worryingly – because watchdog institutions and government accountability are weaker.

What did we learn from this media leak?

We used the data from the leaked spreadsheet and linked it with detailed information on road construction projects from the National Road Institute. These data included the dates of signature and execution of the contracts, costs, and other project characteristics. This information, along with the legislators’ rollcall voting records, was used to investigate the predictions of our model and the debate over the use of these resources.

‘Sponsored’ road contracts were more expensive than other contracts

We found that contracts which appeared in the leak (those that were sponsored by a legislator) were on average more expensive relative to other public contracts, even after controlling for a series of potential confounders. These excess costs were particularly more pronounced in remote regions (Figure 2). Using a difference-in-differences design we also show that road projects in remote regions of the country were generally associated with changes in economic development (as measured by satellite night lights). However, projects which appeared in the media leak were not associated with any additional economic returns despite being more expensive than similar projects. 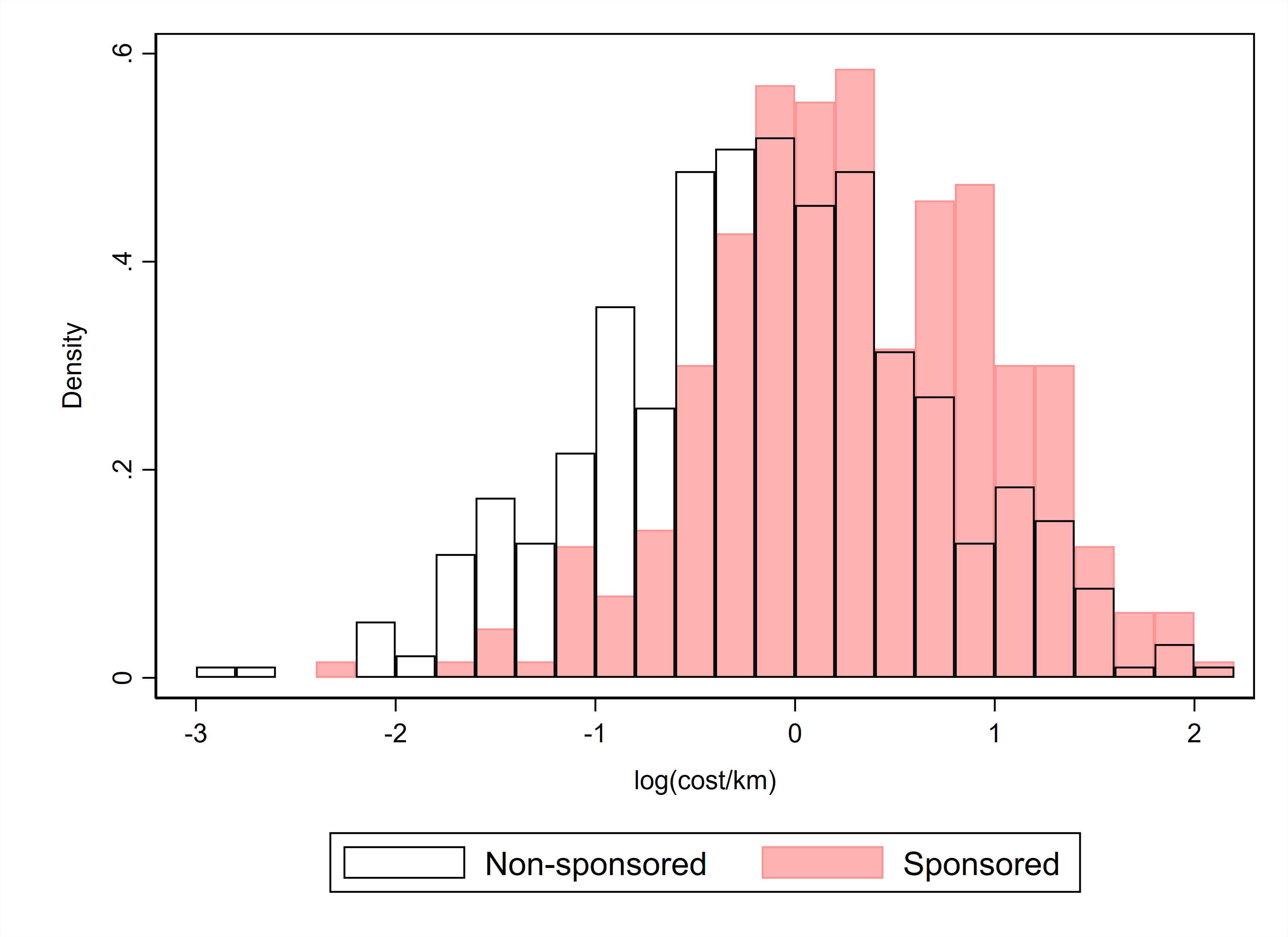 We then study differences between sponsoring legislators and non-sponsoring legislators. We estimate a time-invariant measure of political alignment based on the propensity of legislators to align their votes with the position of the incumbent party. We found that swing legislators – those who generally neither support nor oppose the government in congress – were more likely to appear in the leak, which was consistent with the idea that the government was using these ‘jam’ contracts to sway legislators in favour of its agenda (Figure 3). In addition, legislators from remote regions who would be cheaper to influence are drawn from further left in this distribution (labelled as ‘Periphery’). This empirical finding is consistent with what our model of jam negotiations predicts. 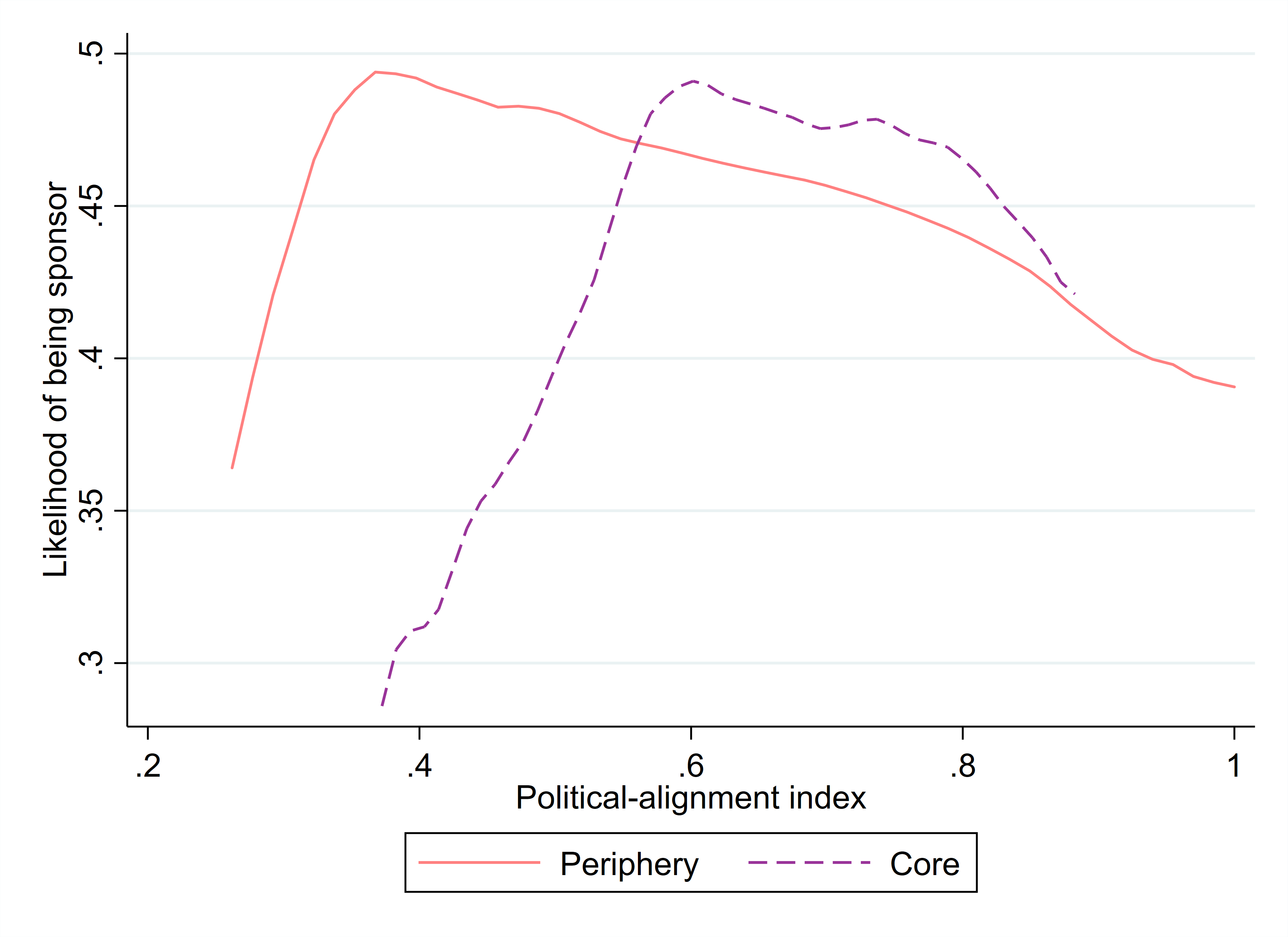 Note: The political-alignment index is constructed based on the roll-voting record of legislators during the first two years of the government (before the road contracts were assigned).

After the deals were signed, legislative support for the government increased

In the main empirical analysis of the paper, we study the relationship between the road project assignments and legislators’ votes in congress using a fixed-effects framework that exploits the panel structure of the data and the timing of the signature of the assigned contracts. This setting allows us to study within-legislator and within-congressional vote differences in voting behaviour. We show that in the month after individually assigned contracts were signed, legislators from remote regions became more supportive of the government (Figure 4).

Finally, we document that the ‘responsiveness’ of legislators to ‘jam’ is heterogeneous along three particular dimensions: the cost per kilometre of the contracts (higher costs, more responsive), the initial legislative position (if initially further from the government position, more changes in support), and the strength of institutions in the jurisdictions which they represent (legislators from departments with weaker institutions appear to have been easier to influence). In contrast, we find weak evidence of heterogeneous responses along jurisdictions’ road density per capita, existing roads per square kilometre, and estimated returns to road investment (which we estimate using satellite night lights). This suggests that constituents’ infrastructure needs were not the main factor determining the changes in legislators’ behaviour.

Figure 4 Changes in legislative support for the incumbent government 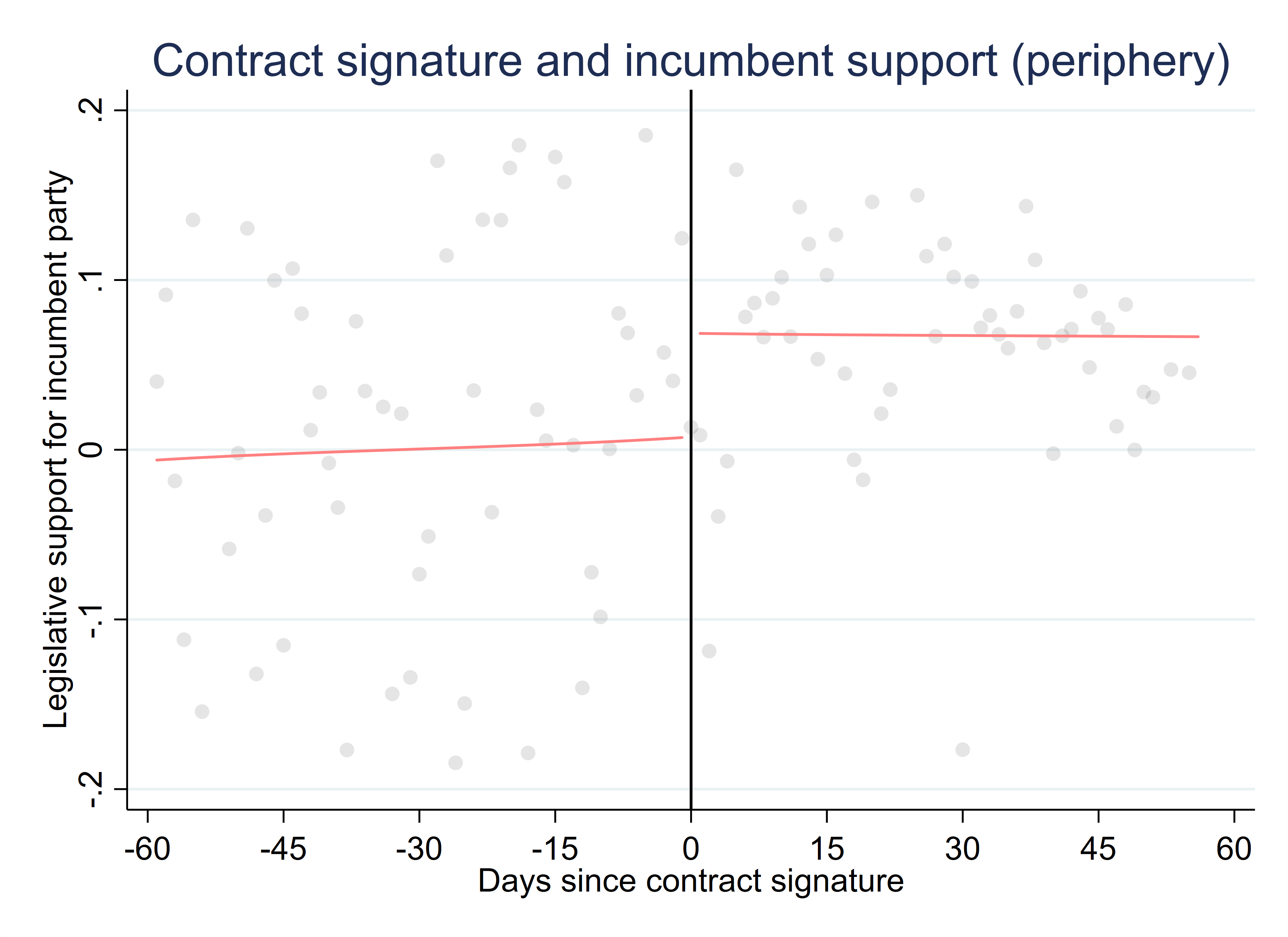 Is 'jam' good for development?

Our work documents how individually targeted and hidden arrangements between branches of government can affect policymaking and highlights an important trade-off. On the one hand, road construction projects in remote regions were associated with increased economic activity. These projects may not have taken place without legislative compromises from their representatives. On the other hand, if the alternative was receiving investments that were not sponsored, which were less expensive but had similar economic returns, and which were not tied to policy votes from legislative representatives, then the practice of ‘jam-barrel politics’ may indeed undermine democratic norms and the effectualness of political representation. This conclusion further underlines the importance of transparency in both the assignment process for public investments and in the processes of public procurement.

Arulampalam, W, S Dasgupta, A Dhillon, and B Dutta (2009), “Electoral goals and center-state transfers: A theoretical model and empirical evidence from India”, Journal of Development Economics 88(1): 103-19.