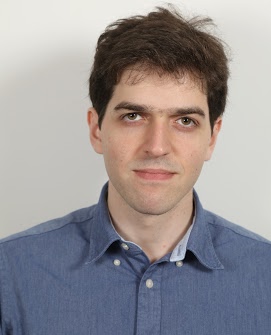 Connected cities request and receive 15% more funds from the national government. Yet the welfare loss from this may be only 0.24% of the budget.

Governments distribute funds across regions to finance local public goods. Ideally, funds would go to regions that most need them, and governments would treat equal regions equally. However, a common cause of concern is that ‘politically connected’ regions get more funds than others (e.g. Burgess et al. 2015, Brollo and Nannicini 2012, Hodler and Raschky 2014). If politically connected regions are being favoured – i.e. getting funds at the expense of regions that need funds more – there could be a case for delegating these decisions to non-partisan actors, or for the creation of formulas for allocation of public funds across regions.

In a recent paper (Azulai 2017), I study the consequences of one prominent form of political connections in democracies: party-based connections between local level politicians (mayors) and national politicians in charge of grant allocations.

To do so, I explore rich data from 2009-2016 containing the universe of grant requests and approvals from 27 national government ministries to Brazilian cities. Different ministries approve grant requests for different types of public goods, and these grants are a substantial component of city-level capital expenditures. This data allows me to provide evidence on the effects of political connections for a broad cross-section of public goods, in a disaggregated manner.

Moreover, the 27 different ministries are often allocated to different parties when national level government coalitions form – seven different parties occupy the different ministries in the typical year.2 I use this to see what happens when a new minister arrives midway through a mayoral term, and a city/mayor becomes connected with that ministry but not with other ministries. This holds fixed all city-year characteristics driving demand for grants from all ministries. The same exercise for cities not becoming connected with any ministry helps removing ministry-specific trends. The figure below illustrates the empirical strategy. 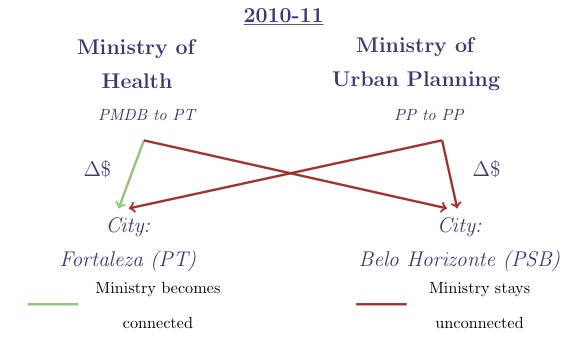 When a ministry changes political party midway through a mayoral term:

With this in mind, how do we quantify the aggregate losses due to favouritism – or how much do unconnected cities lose and how much do connected cities gain? One key challenge to evaluate this is that for many types of public goods – such as sports courts or public squares – we do not have direct measures of relative needs for funds across regions. I look at the welfare losses from connections from the viewpoint of a planner that fully agrees with the ministers, except it does not favour connected cities (for one alternative, see Finan and Mazzocco 2017). This measure can be interpreted as:

By estimating the minister’s willingness to approve a request as a function of connections and funds requested, I can infer (1) the extent of favouritism and (2) whether large requests have a smaller return on an extra dollar. If large requests had smaller returns, connected cities with larger requests would have a smaller return on the extra dollar than unconnected cities, and welfare losses from connections would be large. In the Brazilian context, instead, estimates show this is not the case, and the welfare losses from political connections amount to 0.24% of the typical ministry’s budget for grants – or one hospital per year in a country of 5,500 cities.

That being said, society could be facing much larger welfare losses from favouritism, and it could be desirable to reduce ministerial discretion – for instance, with formulas for fund allocation across regions. My paper informs on this policy issue by computing lower bounds on the welfare costs of political connections. This can be compared with the potential benefits of ministerial flexibility: out of 500,000 grant requests in these eight years, only 80,000 were approved. Without evidence that these ministers diverge from society in other respects other than political connections, we cannot reject the possibility that the welfare cost from connections is small, while the benefit of having the flexibility to reject bad grant requests is large.

[1] Inequality concerns can be viewed as a ‘discount’ on the return on funds for the better-off cities (or a discount on the returns from connected cities).