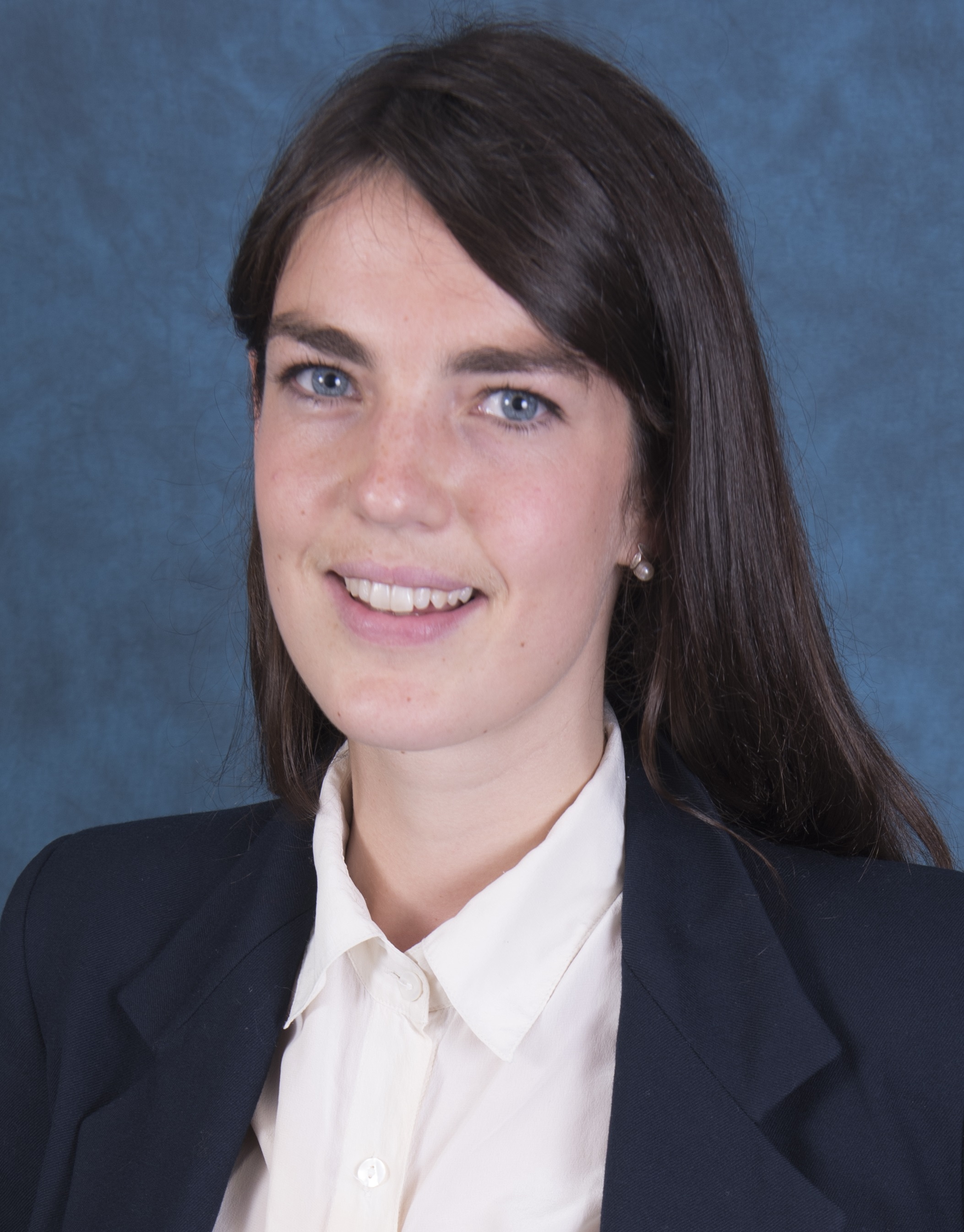 Most poor people work.  They stay poor because the jobs they do offer low returns. There are two broad views as to why this is. The first, which for the purposes of this post we shall call the ‘equal opportunity’ argument, is that the poor and the non-poor have fundamental differences in traits such as talent or motivation, and therefore that the poor choose different activities and occupations. Figure 1 demonstrates this argument; it shows capital (k) at two points in time (t and t+1) for low and high ability types (AL and AH). The diagonal dashed line indicates equal wealth in both periods. High abilities types will have more capital in the second period (kt+1), no matter what level of capital the two groups start off with (kt).

The second view, which we shall term the ‘poverty trap’ argument, rejects the idea that there are intrinsic differences between the poor and the non-poor, and argues instead that there are poverty traps; the opportunities available to the two groups and different, and the poor have no choice but to work in low productivity jobs. Figure 2 shows the ‘s-curve’ that is implied by this argument. There is just one type of person, and their wealth in the second period (kt+1) is determined purely by their initial stock of wealth. If initial wealth is greater than the critical threshold of k then an individual’s wealth will grow. If it is less than k, their wealth will shrink.

Figure 2 The poverty trap argument posits that there is an s-curve; there is just one type of person, and their final wealth is determined by the amount of wealth they start with 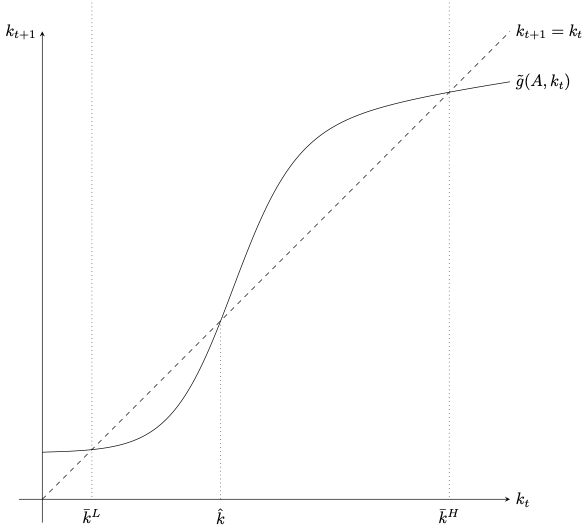 The equal opportunity argument is associated with growth models going back to Solow (1956), who stressed that countries with the same intrinsics would eventually converge to the same outcomes. This implies that any difference in long-run outcomes must be due to differing individual characteristics. Arguments for a poverty trap also go back a long way; Malthus, writing in the early 19th century, argued that countries can be trapped in an equilibrium of high population growth and low per capita income, and a whole literature emerged from the 1960s around ‘underdevelopment equilibria’ and the resulting need for a ‘big push’ (e.g. Hirschman 1957, Rostow 1971, Rosenstein-Rodan 1961).

The two arguments have very different policy implications, which makes adjudicating between them very important. If the poor receive a sudden wealth increase the equal opportunities argument predicts that they will eventually return to the activities and wealth level implied by their intrinsic characteristics, and therefore will still need long-term consumption support. The poverty trap argument, on the other hand, suggests that if wealth shocks are large enough to move individuals above the critical threshold, they will shift permanently to a higher level of wealth. In the poverty trap view of the world, therefore, sustainable poverty reduction can be achieved through a well-designed programme of time-limited assistance.

Unfortunately, distinguishing which mechanism is at work in causing persistent poverty is also very difficult. Empirical proof of a poverty trap requires an external shock that is just the right size. If the shock to assets/opportunities is too small to push recipients over the poverty trap threshold, then they will fail to escape from poverty – an outcome that is also consistent with the ‘equal opportunity’ explanation. If the shock is too big, then all recipients move out of poverty simply due to the size of the transfer, which is also consistent with the equal opportunity explanation (at least in the medium term).

Academics at the LSE  have partnered with BRAC to develop a strategy to identify the threshold. Balboni et al (2020) evaluates BRAC’s Targeting the Ultra-Poor (TUP) programme – a one-off transfer of assets and skills to the lowest wealth group  –  by surveying assets before the intervention and four years later.  The size of the transfer was calibrated by BRAC, who had in-depth knowledge of the area and the assets and work patterns of the non-poor. The variation in original wealth levels of recipients was negligible but the sample size was large (approximately 23,000 households), which allowed for a precise estimation of the final wealth level for each initial wealth level. Figure 3 plots the findings of the evaluation and shows a clear s-curve. 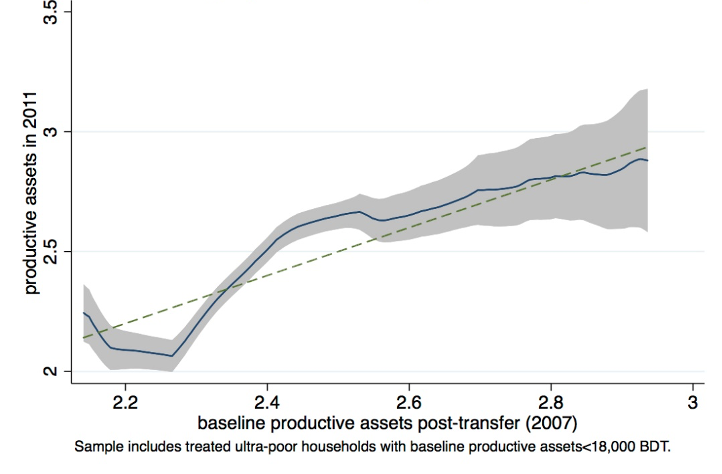 As Figure 3 shows, there is a critical initial asset threshold that determined whether recipients escaped from poverty. After four years, those who passed the threshold (two-thirds of treatment beneficiaries) had been able to accumulate 14% more assets than they had just after the transfer, while those that did not reach the threshold (one-third of treatment beneficiaries) had on average lost 16% of their asset value.

This importance of this finding cannot be overstated; this paper provides perhaps the first empirical example of poverty traps.

The threshold level for escaping poverty is large, but the benefits to the poor are much larger

Using Figure 3, the study estimates that the key asset threshold for escaping poverty is around US$550 (PPP). The median asset level of an ultra-poor household hovers around zero, which implies that a relatively large transfer is required to enable the ultra-poor to climb out of poverty.  This is a vitally important insight, and may help to explain why microfinance – which has been the great white hope of the international development for the last few decades but which generally offers much lower capital transfers – has often failed to live up to the hype (see the VoxDev column by Meager 2019).

At first glance, this finding is somewhat daunting; the size of the transfer needed to move individuals out of poverty may appear large to a generation that has been brought up on the promise of microfinance. However, programmes of this type are likely to be cost effective in the long run compared to the cost of ongoing social assistance and consumption support.

Is it time to rethink the way we think about poverty reduction?

The key conclusion of this study is that a significant one-off transfer will, in some circumstances, enable individuals to sustainably lift themselves out of poverty through their own agency.  This is not necessarily (just) an asset transfer; training and human capital transfers may be at least as important.

More work is needed to test the applicability of these results elsewhere and to investigate how thresholds differ for different sub-groups, but these findings represents a huge breakthrough in the literature around poverty reduction. As a result of the Sustainable Development Goals, the question of how to eliminate extreme poverty by 2030 has risen to the top of the development policy agenda. The central idea of this paper – that “to tackle persistent poverty, we need big push policies” – suggests that to achieve this goal we may need to fundamentally reset the way the we think about the nature of, and solutions to, extreme poverty.

Editors’s note: This column is based on the paper “Why do people stay poor?” by Clare Balboni, Oriana Bandiera, Robin Burgess, Maitreesh Ghatak and Anton Heil.

Malthus, T R (1817), An essay on the principle of population, as it affects the future improvement of society. With remarks on the speculations of Mr. Godwin, M. Condorcet, and other writers.

1 Clare Balboni and Anton Heil were students at LSE during this project; they are now at MIT and Berkeley, respectively

2 The transfer included a choice of six available livestock asset bundles, a support and training package, and a short-term subsistence allowance to eligible women. This allowance is not included in measures of income or earnings during follow-up survey rounds.