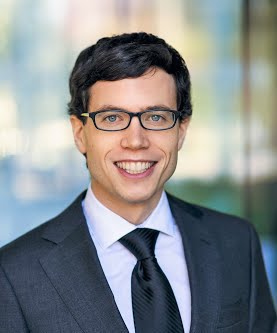 Government jobs are often allocated based on bribes and patronage. How does this process work, and can this lead to good outcomes?

In many developing countries, obtaining government jobs through paying bribes and political connections is thought to be ubiquitous. The conventional wisdom has been that such practices lead to the hiring of low-quality government workers (Sukhtankar and Vaishnav 2016, Muralidharan 2015). This may cause serious and long-run harm since government workers often have long careers and influence many other individuals through their actions. For example, if a low-quality teacher is hired due to bribery, this could have a negative impact on not only their current students, but on the hundreds of students they will eventually teach.

Aside from a few qualitative accounts (Wade 1985), almost nothing is known about how corruption in hiring for government jobs works in practice. There is also an absence of evidence on more complicated questions such as whether it has negative consequences. Some recent papers have shown that an individual’s personal connections help getting hired for government jobs, and that such patronage-based hiring is related to worse outcomes from hires (Colonnelli et al. 2017, Fafchamps and Labonne 2017, Xu 2017).

In a recent paper, I collect data to answer these questions (Weaver 2017). The data come from a hiring process for mid-level manager positions in a developing country bureaucracy. Each hired manager supervises 15-20 health workers who deliver primary health care services in rural villages. I collect detailed data on both the hired managers and the health workers they supervise, including bribe offers by those who applied for the job and payments by those who were hired.

How do these markets work? 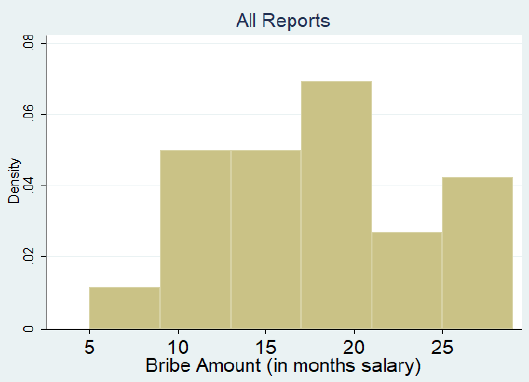 However, the size of an applicant’s bribe offer is by far the most important factor, determining the majority of hiring decisions. Understanding that the process works as an auction primarily based on bribes is useful in devising anti-corruption strategies.

The impact of corruption

Hiring high-quality individuals for this job (as a mid-level government manager) matters a great deal for delivery of public services. I find that reassigning a frontline worker from being supervised by a median quality manager to one in the top 15% of managers leads to large improvements in performance. This includes a 7.6% increase in deliveries at a hospital and a 15% increase in newborn check-ups conducted. Whether corrupt hiring leads to worse quality managers being selected will clearly matter.

To determine the impact of the corruption, I create a method to compare the actual hires, under the corrupt system, to those who would have applied and been hired under more standard hiring methods, such as selecting the highest scorers on a standardised test. Surprisingly, the corrupt system performs quite well when compared to three merit-based methods of hiring.

Figure 2 plots the quality of hires under each of the system, where 0 is the worst value and 1 is the best. Actual hires are significantly better than hires based on a knowledge-based test, and weakly better than hires based on past performance in a lower level role. However, the actual hires are not the best possible hires. Hiring based on a Raven’s Matrices test, a test of problem-solving ability, yields a superior set of hires. 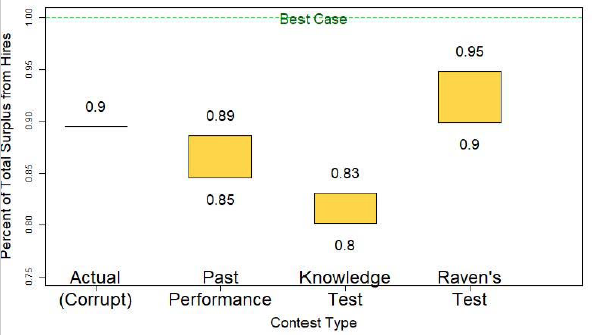 These findings are counterintuitive, but have a simple explanation. Hiring based on bribes selects those who are wealthy and have a high desire for the job (willingness to pay). Both wealth and willingness to pay are strongly positively correlated with being a good manager in this context, which causes corrupt selection to lead to the hiring of good managers. Some of the other selection methods, such as the health knowledge test, are less strongly related to performing better as a manager. As a result, hires under those systems are not of as high a quality.

The study also discusses the types of jobs in which corruption will lead to more or less negative outcomes. Corruption in hiring for many types of jobs will be similar to this case and need not lead to negative outcomes. However, it will lead to bad outcomes for other types of jobs, such as police officers or tax collectors. This finding is related to whether there are many opportunities for corruption in the job in question. In jobs where there is high scope for corruption, more corrupt individuals will be willing to pay larger bribes, and thus be selected.

Fafchamps, M and J Labonne (2017), “Do Politicians’ Relatives Get Better Jobs? Evidence from Municipal Elections”, The Journal of Law, Economics, and Organization 33(2): 268-300.

Kristiansen, S and M Ramli (2006), “Buying an income: The market for civil service positions in Indonesia”, Contemporary Southeast Asia: A Journal of International and Strategic Affairs 28(2): 207–233.

Xu, G (2017), “The Costs of Patronage: Evidence from the British Empire”, Working Paper.