Do changing gender norms counteract the effects of information on the aspirations of Saudi women? 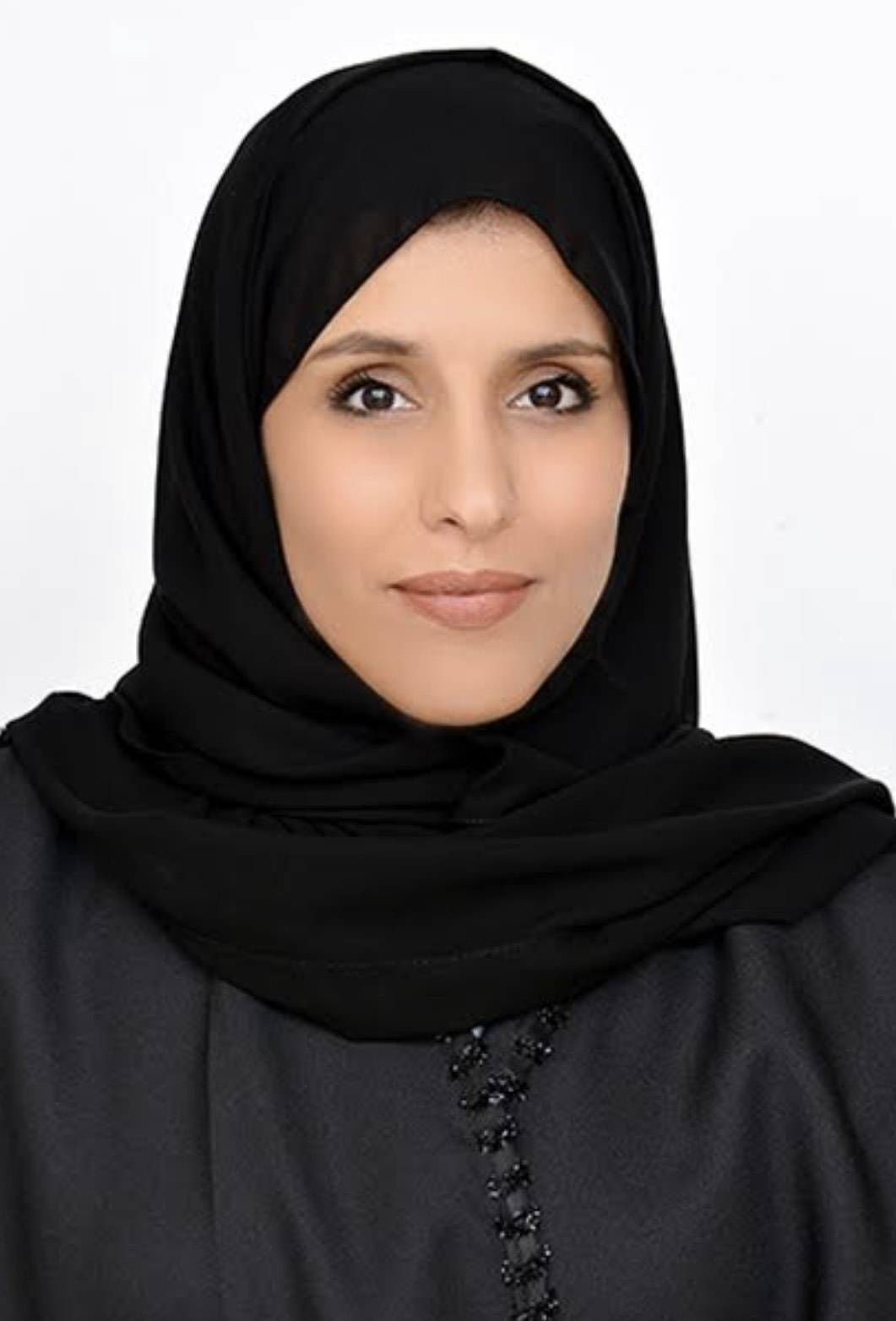 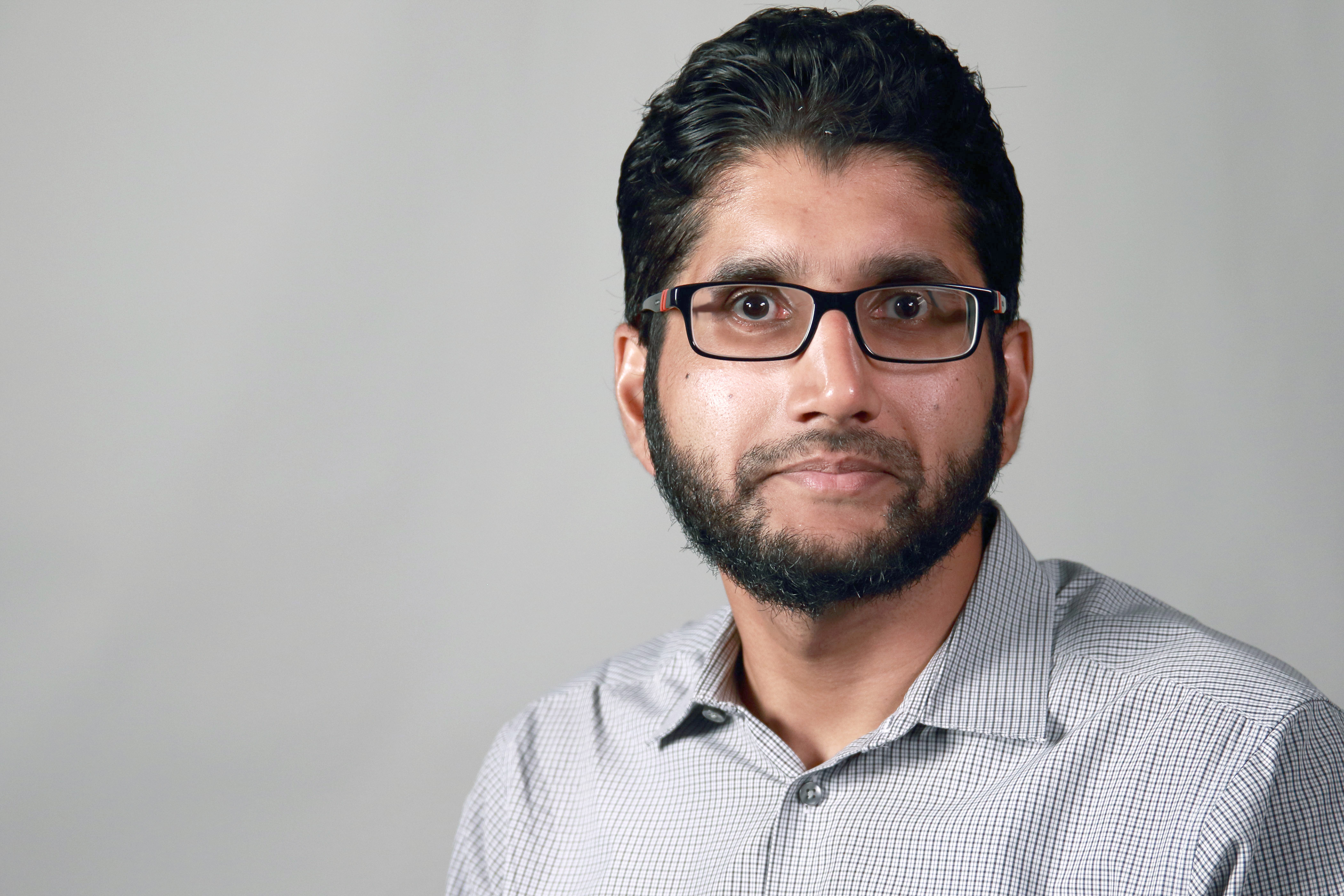 The provision of information about peers’ aspirations increases the labour market expectations of Saudi women, and is not counteracted by local gender norms

Female labour force participation (FLFP) in the Middle East and North African (MENA) region, at approximately 20% in 2019, is the lowest in the world (World Bank 2020). Explanations for the persistence of the low FLFP rates have tended to focus on local gender norms – the stigma associated with women working outside of the home. However, opportunities for women to work are increasing and FLFP is rising.

In such a fast-changing environment, are women informed about labour market opportunities? If more women entering the labour force is altering gender norms (Jayachandran 2019), are young women informed about the pace of social change? Prior literature suggests that beliefs about both aspects can play an important role in women’s labour force participation decisions (Fernandez 2013), and that correcting misperceptions of prevailing social norms can increase FLFP (Bursztyn et al. 2018).

The Kingdom of Saudi Arabia (KSA) is one country in the MENA region where, even though female labour force participation (FLFP) rates are low, they have been increasing quickly, from 18% in 2010 to 23% in 2018. To understand whether women’s own labour market expectations (“self-beliefs”) differ from their beliefs about their peers’ aspirations (“population beliefs”), we conducted an original survey of approximately 1,000 female students at King Saud University (KSU) in 2018 (Aloud et al. 2020). KSU is the largest public university in KSA. We focus on college students as women’s employment rates are highest amongst university graduates, and tertiary enrollment has increased rapidly in recent years (from 39% in 2010 to 68% in 2017 for women). Thus, these are the women who are very likely to be on the margin of deciding whether to enter the labour force.

We find that that the labour market expectations of these young women are quite high, and higher than their perceptions of their peers’ aspirations: the average belief that one would be working at age 25 (mean “self-belief”) is 67.7%, while respondents think that the average response of other females (i.e. their perception of their peers’ expectations) is 51.7%. In fact, for all the labour market beliefs we measured, the average “self-beliefs” were significantly higher than the corresponding “population beliefs”, suggesting that students underestimate the labour market aspirations of their peers. This is in line with prior work by Bursztyn et al. 2018, who also find a misperception of social norms among Saudi men. The misperceptions therefore seem to extend beyond men in this context.

Interaction of information and social norms: experimental set up and hypothesis

To investigate this, we embedded an experiment within the survey, in which we randomly provided one-third of the respondents our first treatment arm (T1), the “Information treatment”, after our measurement of “population beliefs” and prior to our measurement of “self-beliefs”.  This first treatment provided objective information about labour market statistics (such as actual average monthly wages of female college graduates), and “social information” about aspirations of their female peers regarding family and career (such as the average likelihood of KSU women expecting to work at age 25).

We hypothesized that the impact of the information treatment (T1) may not impact women’s labour market expectations if current decisions are still being anchored in the long-standing gender norms of the previous generation. To test this, our second treatment arm (T2), the “Parents’ treatment”, randomly provided another one-third of the respondents with the same information provided in T1, along with a prime that made the role of parents salient. To do this, we asked the respondents whether they would like to share a summary of their survey responses with their parents. This prime is meant to bring to mind the attitudes of the student’s parents, which we would expect to be more in line with historic gender norms (we did not actually share the responses with the parents). The remaining third of respondents were our control group, which did not receive either of the treatments.

Figure 1 shows the distribution of responses to a question on beliefs about working full-time at age 25 conditional on working, for the 3 groups (control, T1 and T2). There is a clear shift towards the right for the two treatment groups, and the T2 cumulative distribution first order stochastically dominates the control distribution: at any given value, the proportion of students giving a response higher than that is larger for the T2 group than it is for the control group.

We show that this amplification in T2 is primarily driven by students who report wanting to share their responses with their parents. We also find evidence of meaningful heterogeneity by the student’s background, with larger impacts for students with working mothers, suggestive of intergenerational transmission of attitudes.

Figure 1 Cumulative distribution of self beliefs of working full-time 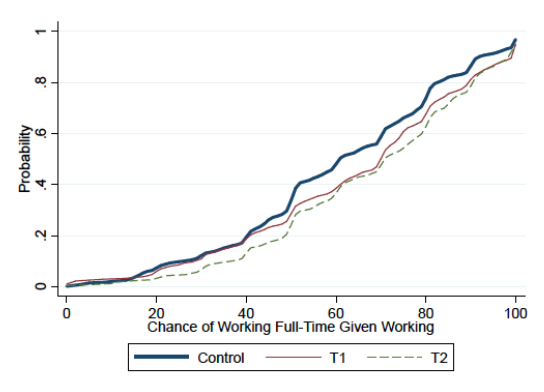 In order to better understand the effects of the second treatment (T2), we conducted a shorter follow-up survey with a convenience sample of 150 students. Our results, while only suggestive, indicated that many of the parents of these Saudi women appear to expect their daughters to work, which meant that the parents’ treatment (T2) would not dilute the effects of the information treatment (T1). Yet, we also found that some daughters would like the opportunity to discuss future plans with their parents and inform their parents about the changing social norms regarding the labour market.

We note that the parents’ treatment (T2) in our experimental survey did lead to a significant increase in the reported expectation of working in the education sector, and a small decline in the expectation of working in the services sector. Current employment rates for women are highest in the education sector, as teaching is considered a socially acceptable profession for women, and services less so. Thus, the parents’ treatment (T2) seems to induce students to report wanting to work sectors more consistent with prevailing social norms. This is also consistent with our findings from focus groups with parents, where they said they wanted their daughters to work, but at the same time exhibited a strong preference for gender segregation in the workplace; sectors like education are much more likely to provide such an amenity.

Our results suggest that students appear to underestimate the pace of social change, and are eager

to discuss their future plans and the provided information with their parents. This, in turn, suggests that policies which disseminate information about objective labour market statistics and the pace of social change, while also enabling communication between daughters and their parents, are likely to facilitate informed decision-making and should therefore be promulgated.

Moreover, in a setting where parents are seen to be supportive of their daughters working but have a strong preference for gender segregation in the workplace, policies that lower costs for firms to employ males and females (by, for example, providing subsidies to build gender-segregated facilities) may be useful. In fact, Miller et al. (2019) show that costs of integrating females into the workplace are very high in our context.