Do migrants affect the domestic economy? Evidence from Colombia

Developing countries have two special characteristics that justify a separate analysis of the impacts that refugees have within their economies. Firstly,  most of the refugees are hosted in the developing world.1 Developing nations have less financial capacity for border control and they are most commonly the neighbouring locations of armed conflicts. And secondly,  developing countries have large informal sectors allowing refugees to perhaps integrate more quickly into the economy without job permits.

Middle-income and poor nations have implemented a broad spectrum of responses in terms of granting refugees the right to work in their territories. Some countries have granted refugees unrestrictive rights to work and free mobility, whereas other countries have opted to offer more selective labour market access based on sector restrictions or on whether a firm sponsors the refugee’s work permit. Because many refugees work in the informal sector, it is possible that they might not be interested in their migratory situation being regularised if, for example, they only perceive costs of regularisation programmes including paying taxes or being monitored by governments. Overall, then, how can refugee regularisation programmes impact a developing country?

Examining the effects of the PEP-RAMV amnesty programme

In the last few years, with a group of outstanding co-authors, which include Ana María Ibáñez, Dany Bahar, and Andrés Moya, and with support from IPA Colombia, I have been working on understanding the consequences of the PEP-RAMV,2 the largest migratory amnesty programme offered to undocumented migrants in a developing country in modern history. The amnesty was offered by the Colombian government to regularise approximately half a million undocumented Venezuelan migrants in August of 2018.

The amnesty was offered to any irregular migrant who had been registered in a nationwide census collected between April and June 2018 by the Colombian government. The census registered about 442,000 Venezuelans. The initial purpose of the census was to identify and collect basic demographic information on the undocumented immigrants residing in Colombia; importantly, it was not originally intended to serve as a basis for revising individuals’ migratory status. In July 2018, however, outgoing President Juan Manuel Santos unexpectedly announced that all Venezuelan immigrants who had registered in the survey would be eligible for formal temporary migratory status. This renewable two-year visa granted undocumented Venezuelan immigrants the legal right to work and to access basic public services. Unlike cases of other countries granting regular migratory status on a large scale to undocumented migrants, access to the PEP-RAMV programme was not conditional on any eligibility criteria aside from having registered in the aforementioned survey.

The PEP programme had no significant effects on Colombian workers

We first were able to document that the PEP-RAMV had negligible effects on Colombian labour markets 15 months after its implementation (Bahar, Ibáñez, and Rozo 2021). To evaluate the effects of the programme, we compare labour outcomes in departments that have larger and lower treatment intensity, before and after the programme roll-out (see Figure 1). We focus our analysis on the impacts of the programme on weekly hours worked, monthly wages, employment, and labour force participation for three samples of workers: Colombian natives, Venezuelan migrants, and Colombian workers who returned to Colombia over the past five years.

Figure 1 Event study: Impacts of PEP on the formal sector 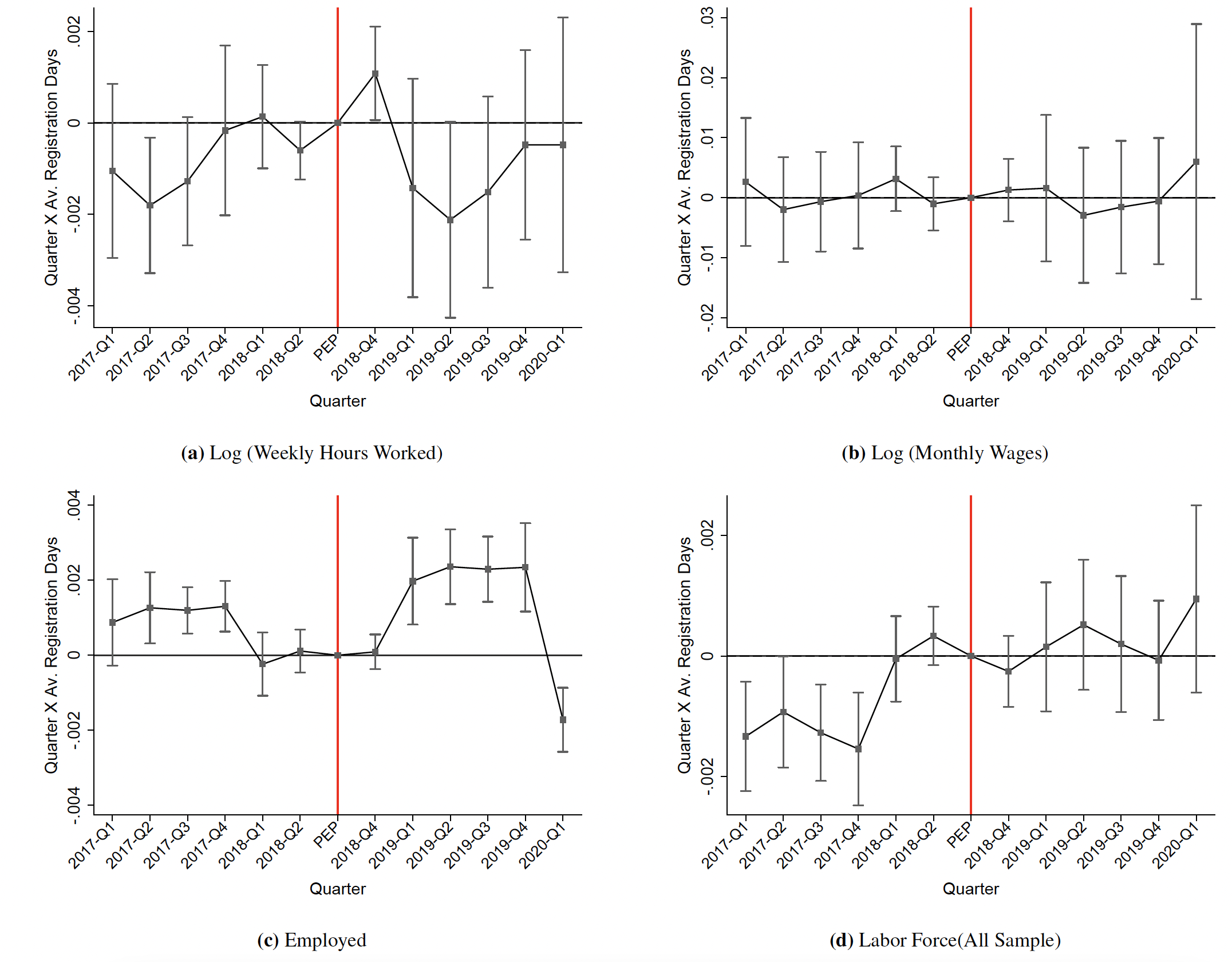 Notes: The figure illustrates the evolution of an event study estimation. We interacted the variable PEP with quarterly indicator variables excluding the third quarter of 2018, when the PEP-RAMV programme was implemented. The squares illustrate point coefficients comparing differences between departments that have larger and lower treatment intensity, before and after the programme roll-out. Please see Bahar et al. (2021) for details.

What about the implications of being a beneficiary of the PEP amnesty programme?

In a more recent study (Ibáñez, Moya, Ortega, Rozo, and Urbina 2021), again with support from IPA Colombia, we surveyed 2,232 migrant Venezuelan households in Colombia to explore the implications of being a beneficiary of the PEP-RAMV amnesty in terms of labour market access, welfare, health (physical and mental), and integration into Colombian society. We employ several empirical methodologies to answer this question. In my preferred methodology, we exploit the fact that only those migrants registered at the RAMV and who arrived at Colombia before 8 June 2018 could have applied for the PEP-RAMV amnesty. Hence, we compare migrants who, solely based on their arrival date in Colombia, were able (if they arrived earlier than 8 June) or not (if they arrived later) to apply to the PEP-RAMV programme. Figure 2 illustrates our empirical methodology. 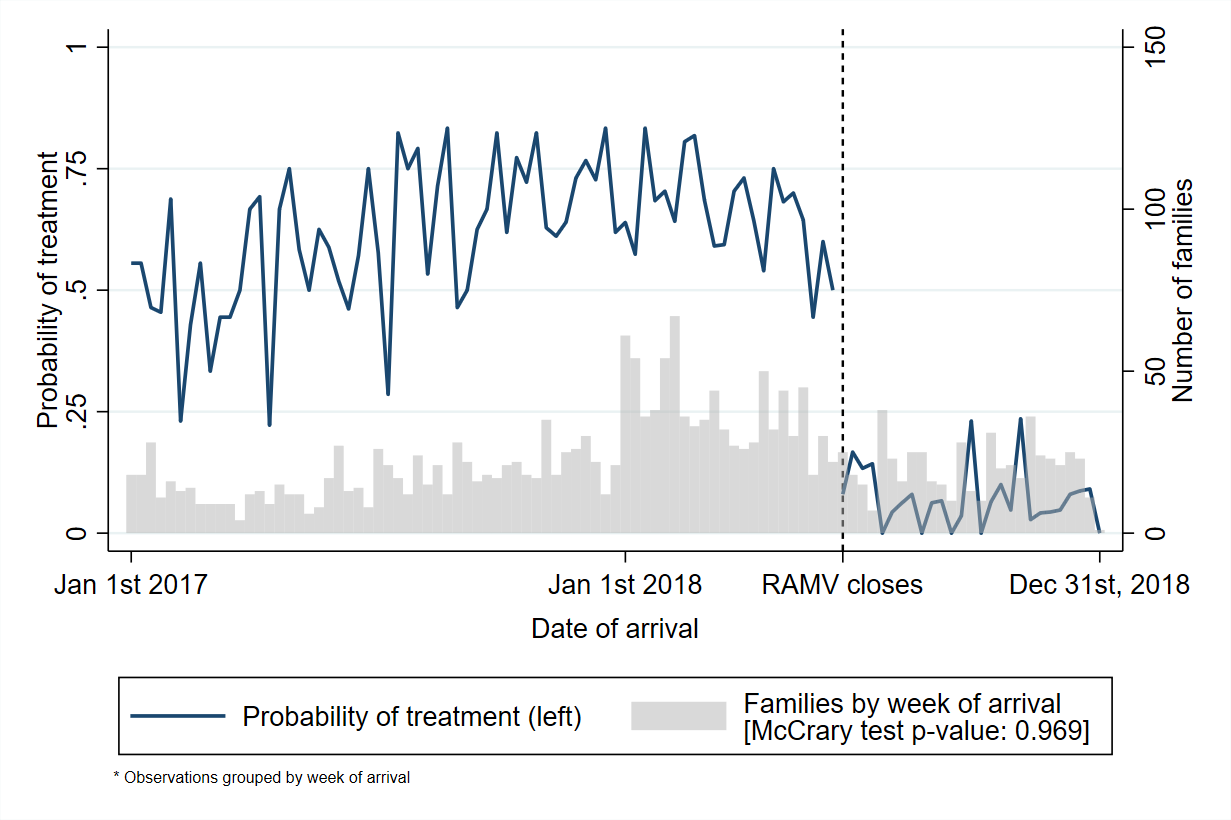 The results of our analysis suggest that the migrants who applied for the PEP-RAMV have substantially higher consumption per capita and labour income, as well as more access to social safety nets (such as comprehensive health services) relative to the migrants that did not apply for the amnesty. Moreover, migrants report better reservation wages, job satisfaction, less food insecurity and greater feelings of integration into Colombian society. However, we also observe small effects in terms of labour formalisation, in line with our previous analyses. In other words, our analysis suggests that migrants’ labour market conditions are improving inside of the informal labour markets, but that no major shifts are happening in terms of labour formalisation.

Bahar, D, A M Ibáñez and S V Rozo (2021), “Give me your tired and your poor: Impact of a large-scale amnesty program for undocumented refugees”, Journal of Development Economics 151: 102652.