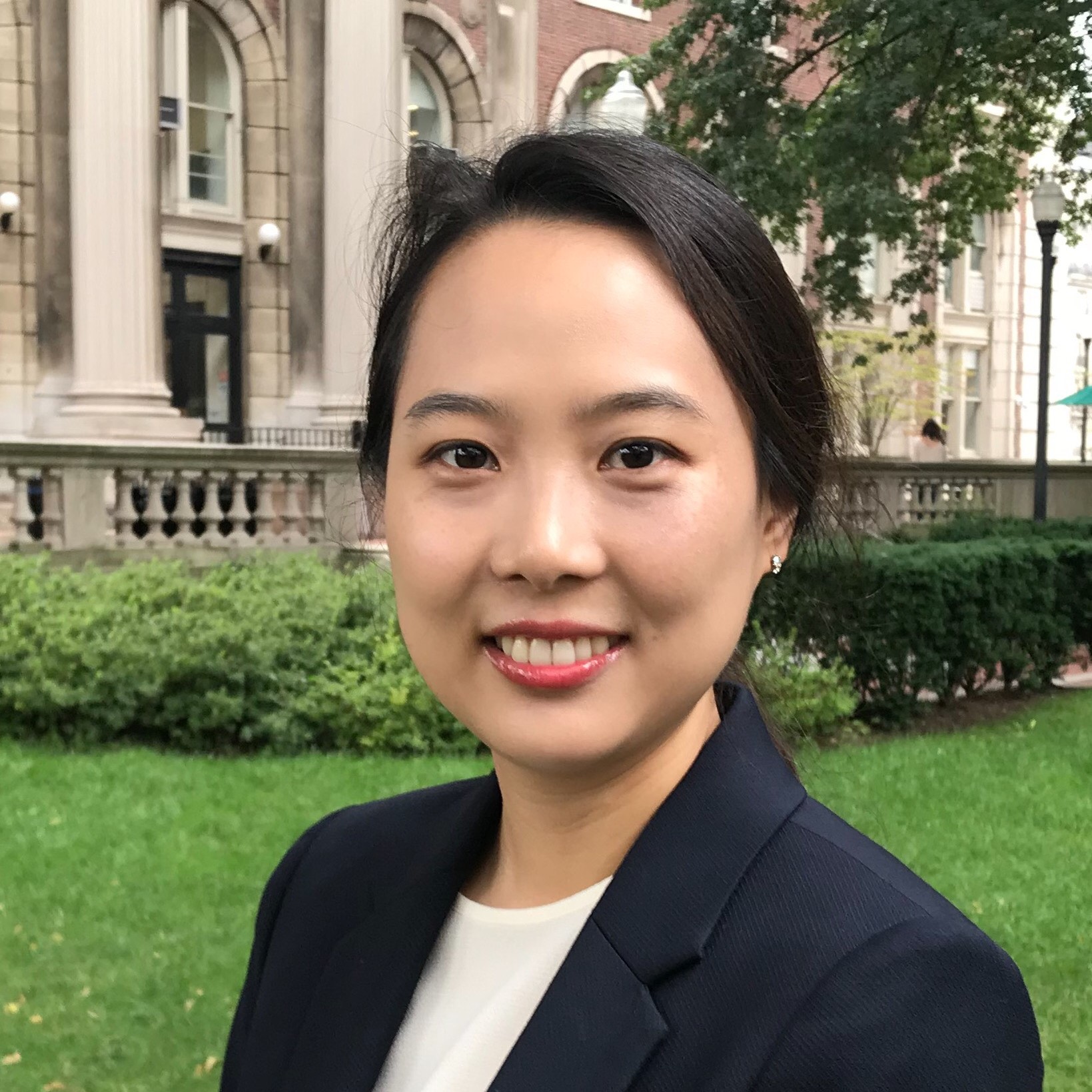 In India, 17% of men are still engaged in their traditional caste-associated occupations, despite sweeping changes in educational attainment and occupational distribution in the overall economy during the last few decades (Cassan et al. 2019, Hnatkovska et al. 2012). This could be driven, in part, by individuals’ desires to preserve their caste identity. More generally, identity may be an important factor driving individuals’ decisions to work in specific jobs, thereby contributing to the unequal distribution of occupations across social groups. Yet, empirical evidence on the relationship between identity and occupational preference is lacking.

In many settings, occupations are unevenly distributed across social groups. For instance, some jobs are largely filled by a particular gender or racial group. In India, many jobs have historical associations with specific caste groups, and are still more likely to be held by members of those castes. Could it be that people are avoiding certain jobs to preserve their identity? If so, this could end up causing misallocation of talent and therefore economic inefficiency (Cassan et al. 2019).

However, it is difficult to measure the extent to which people avoid jobs solely due to identity concerns. One reason is that a group that prefers certain occupations tends to differ from other groups along many dimensions, including training and wealth. In addition, since one’s occupation influences how he or she is perceived by others, it is difficult to disentangle identity concerns from concerns over social image. My research (Oh 2020) uses a field experiment in the state of Odisha, India, to investigate how concerns about upholding identity affects one’s decision to work in specific jobs. Relying on some unique features of the Indian caste system, I provide the first experimental evidence that people are willing to forgo substantial earnings to avoid jobs that conflict with their identity.

Designing an experiment on identity and social image

Social theories on identity posit that it can play a factor in motivating people to avoid performing jobs or tasks that are associated with social groups different from their own (e.g. Burke and Stets 2009). Such effects may be stronger if the social groups associated with the jobs are perceived as having relatively lower social status (Tajfel and Turner 1979). In addition, individuals seek to avoid violating internal rules of behaviour (Akerlof and Kranton 2000, Bénabou and Tirole 2011). Spending even very small amounts of time on an identity-inconsistent task could be an unacceptable violation.

Motivated by these ideas, I examined people’s reactions to jobs that involve spending only a little bit of time on tasks that are associated with specific social groups. A rural labour market in Odisha, India, provides a setting with the right features. Caste constitutes a central part of people’s identity, and the social hierarchy of castes is widely recognised. In addition, castes have historical links to specific occupations, and these links often extend to simple tasks associated with those occupations. Before the experiment, I ran two surveys to establish the connections between castes and tasks, as well as the ranking of seven castes selected for the experiment.

The experiment elicited 630 workers’ willingness to take up job offers that involved spending some time on different tasks. All offers provided the same fixed wage and involved working on a default manufacturing task, and an additional task for a total of five hours. The additional task varied across offers, was to be performed in private, and differed in its caste association (associated with own, higher, or lower caste, or unassociated). The time allotted to the additional task could be as much as 90 minutes, or as little as 10 minutes. Workers evaluated 32 different offers (involving eight kinds of additional tasks and four time-variations) and were asked to choose whether to take up each one as if it were a single, take-it-or-leave-it offer. At the end of this elicitation, one offer was randomly selected for each worker. If the worker had agreed to take up the offer, the worker could complete the job to receive the promised wage.

I compared the take-up rates of offers involving ‘identity tasks’ (tasks associated with specific castes, i.e. washing clothes, mending leather shoes, and sweeping latrine floors) to those involving paired control tasks (which entailed similar skills as the above but without any caste associations; i.e. washing farming tools, mending floor mats, and sweeping animal sheds). The figure below plots the average take-up rates of job offers against the time required on additional tasks. The flatness of the lines shows that take-up rates vary little with spending additional time on tasks. 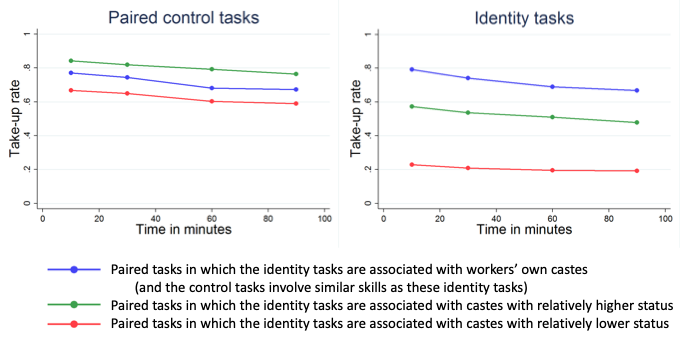 To determine whether concerns about social image, as opposed to identity, could explain the effects on take-up, I randomised whether or not workers’ decisions were publicised to their neighbours. I find similar effects on take-up across these privacy treatments, which suggests that identity is the main driver of these effects. A likely explanation is that workers are intrinsically motivated by their caste identity to refuse certain offers even before considering social consequences. This is in line with workers’ responses in a follow-up survey, which frequently cite feelings of shame or caste-related rules as the reasons for turning down offers.

I ran a supplementary experiment to quantify the wage that workers would be willing to forego in order to avoid engaging in caste-inconsistent tasks. Workers were hired for a one-day job working on a default manufacturing task. They were then unexpectedly given a chance to switch to a different task for part of the remaining working time. Similar to the first experiment, switching offers could involve the identity tasks or the paired control tasks. In addition, switching offers could provide a bonus wage in addition to the default wage. Workers could also refuse these offers altogether to continue with their original arrangement. Results indicate that 43% of the workers refused a bonus worth 10 times their daily wage in order to avoid spending 10 minutes on tasks associated with other castes. This rate is 29 percentage points greater compared to when offers involved the paired control tasks. Again, the effect is invariant to whether or not workers’ decisions were publicised.

Identity effects in the labour market

The above findings indicate that identity concerns constrain labour supply decisions amongst workers in Odisha, causing them to avoid certain jobs even at large economic costs. This adds to the ongoing debate over the present role of caste in the Indian labour market (Mosse 2018, Munshi 2019).

Furthermore, this identity channel is likely to be important in other settings where jobs are associated with specific social groups. For example, in many societies, blue-collar sectors (typically dominated by men) are shrinking while pink-collar sectors (dominated by women) are surging; despite this changing dynamic, men are slow to move into the latter (Miller 2017, Howe 2018). Policies that are aimed at making the occupational distributions across such social groups more equal may be ineffective if they fail to account for people’s need to adhere to their identity-based behavioural rules (World Bank 2012). This highlights the need to collect more empirical evidence and add to our understanding of how concerns over identity may impact decision making.

Acemoglu, D and J A Robinson (2020), The Narrow Corridor: States, Societies, and the Fate of Liberty. Penguin Books.

Mosse, D (2018), “Caste and Development: Contemporary Perspectives on a Structure of Discrimination and Advantage”, World Development 110: 422-436.