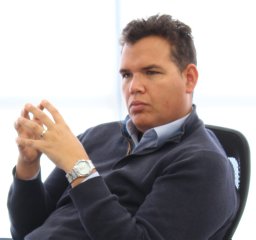 As half a million Venezuelan refugees seek amnesty in Colombia, locals exercise their voice through voting

In our recent work (Rozo and Vargas 2021), we  propose a third driver of these effects that is likely to occur in contexts of political polarisation. We call this novel mechanism ‘strategic electoral misinformation’. It takes place when political parties in hosting countries use a migration wave to highlight the association between their competing parties’ electoral platform and the predominant ideology of the ruling regime in the migrants' expelling countries. This strategy's main objective is to create fear among voters in order to reduce the electoral support of competitors. This phenomenon is certainly pervasive in the West. Prominent examples include efforts by populist leaders to link Muslim refugees to Islamic rule in their countries of origin, or the recent efforts by former President Trump's campaign to associate refugees arriving to the US from Central America with the gang- and drug-related groups in their countries of origin.

Migration in the Venezuelan humanitarian crisis

Our analysis centres on the political effects of the arrival of 1.3 million Venezuelan refugees in Colombia, by the end of 2018, as a consequence of the intensification of the Venezuelan humanitarian crisis (see Figure 1). Most of the existing evidence on the political effects of migration has been concentrated in developed countries. However, developing nations, which according to the United Nations Refugee Agency host 85% of the world's forced migration, have larger fractions of vulnerable populations and higher unemployment levels that may exacerbate the labour supply shock generated by the arrival of large numbers of migrants. These characteristics may translate into different effects and mechanisms to the ones documented in previous work. 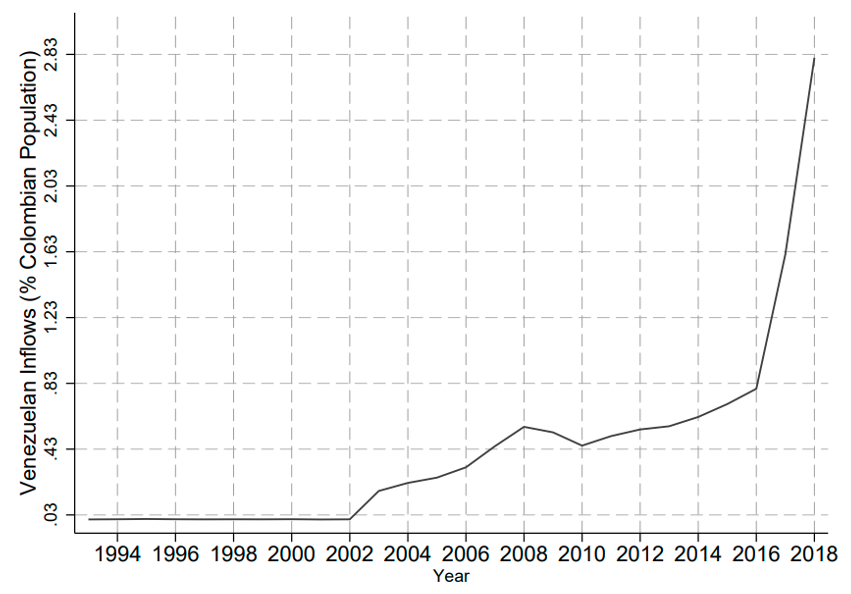 Notes: Venezuelan migration between 1994 and 2002 was estimated with information available from the population censuses of 1993 and 2005. The data available from 2003 to 2018 come from the official statistics of migration produced by the Colombian Statistics Department and Migracio ́n Colombia, it includes transitory migration.

We assess the effects of forced migration on voting behaviour using longitudinal data at the municipal level in Colombia between 1994 and 2018. Since migrants choose their arrival municipalities which may be correlated with voting behaviour inside those areas, we cannot simply compare differences in electoral outcomes across municipalities with higher and lower migration levels. Consequently, we exploit the fact that crisis-induced migrants tend to move disproportionately to municipalities where they have networks that were formed before the beginning of the crisis. In particular, we leverage identification from two sources of exogenous variation in crisis-driven migration shocks at the municipality-year level. Municipal variation comes from the share of early settlements of Venezuelans before the crisis began (see Figure 2). Annual variation comes from the cumulative number of individuals arriving to Colombia from Venezuela each year, which significantly increased as the Venezuelan crisis worsened in the last few years. We interact these two sources of variation to create our ‘predicted cumulative migration shock’ measure. 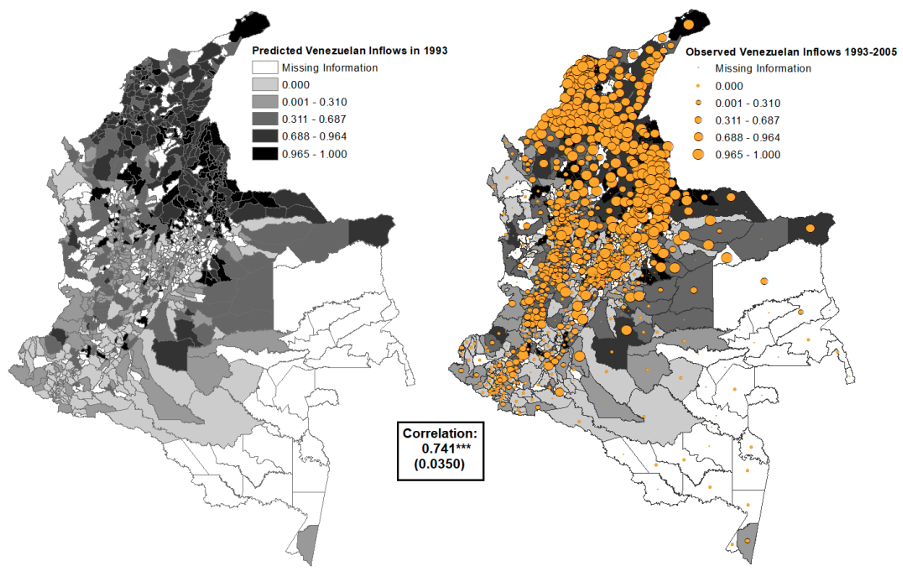 Our main identification assumption is that predicted migration cumulative shocks affect voting behaviour only through actual migration and not through any other channel after controlling for a flexible set of municipal-level characteristics. First, because our estimates include fixed effects by municipality and election year, they are not confounded by time-invariant differences across municipalities nor by temporal shocks that are common among all the municipalities. Second, since the pre-existing networks of migrants coming from expulsion regions might be larger in places with specific characteristics that might have evolved over time in a way correlated with future electoral behaviour, we include interactions between year dummies and a large set of pre-migration shock municipal-level covariates. These include variables related to the incidence of conflict and violence, the magnitude of local and national public expenditures, the number of public institutions, poverty, inequality, labour market conditions, and economic growth. Third, we control for full interactions between department (equivalent to US states) and year indicators in all our estimates.

Our analysis is structured in two parts. First, we examine the effects of the migration shock on political participation and the support of right-, centre-, and left-wing ideologies in the presidential (first and second round) and mayoral elections in Colombia. In line with previous evidence, we find that larger migration shocks result in higher political participation in the first and second round presidential elections. The point estimates suggest that when Venezuelan municipal predicted shocks increase by one standard deviation, turnout increases by 1.1 and 1.3 percentage points in the first and second presidential elections, respectively.

We also find that Venezuelan migration affects the composition of presidential votes from left- to right-wing political ideologies. We find that a one-standard-deviation increase in the predicted shock of Venezuelan migration reduces the share of votes for left-wing political ideologies by 0.9 percentage points and increases the share of votes for right-wing ideologies by the same amount in the first round of elections. Considering that the mean support for left-wing ideologies was approximately 10% during the first round of presidential elections, a reduction of 0.9 percentage points represents a substantial impact. Our analysis of mayoral elections largely validates the effects we observe for the presidential elections. Consistent with these findings, we also document that the predicted Venezuelan migration shock decreases the probability that left-wing political candidates win the election and increases the probability that right-wing candidates do so.

What are the mechanisms impacting voter behaviour?

First, we explore whether voters’ behaviour may be explained by the economic effects caused by a migration shock. For this purpose, we examine the impacts of Venezuelan migrants on the labour market outcomes of Colombian workers. Our findings support the empirical relevance of this mechanism: we document that larger Venezuelan migration shocks are associated with higher unemployment rates and more hours worked by Colombian workers. These effects are meaningful: a one-standard-deviation increase in the predicted cumulative shock of Venezuelan migrants raises overall unemployment by 1.3 percentage points and increases hours worked by 1.8%.

Second, we examine the possibility that the political effects of migration may be driven by cultural differences between migrants and hosting communities. Although we do not perform a formal test of this mechanism due to lack of representative survey data on social preferences and values, we speculate that this explanation is not likely an important driver of the effects we observe. There are two reasons for this. First, in contrast to migration waves that trigger interactions of communities with large cultural differences, such as the recent migrations experienced by Western European nations, Colombia and Venezuela share a strong common cultural heritage and speak the same language. Second, right-wing parties in Colombia are not typically ‘anti-immigration’ as is commonly seen in other countries. For instance, the current right-wing Colombian president has offered a wide set of social programmes and benefits to Venezuelan migrants, including those undocumented or illegal.

Finally, we explore the validity of a novel ‘strategic electoral misinformation’ hypothesis, namely that political parties in receiving countries strategically take advantage of people's awareness of salient migration shocks to campaign against competitors that they claim are ideologically aligned to the regime that triggered the migration crisis in the country of origin. In our setting, right-wing parties have manipulated the Venezuelan migration shock to campaign against left-wing competitors, which they associate with the failure of the Bolivarian Revolution in Venezuela that ultimately led to the recent exodus. For instance, during the most recent presidential elections in 2018, the right-wing alliance widely promoted the theory that voting for the left would lead Colombia into a Venezuela-like economic collapse. To the extent that this propaganda is at least partially effective by generating fear among voters, it is plausible that municipalities where Venezuelan migration has been more salient would be more likely to vote for the right.

We test the empirical validity of this mechanism indirectly, leveraging the fact that some municipalities in Colombia have traditionally been more exposed to an extreme version of left-wing failure, namely to violence perpetrated by left-wing illegal insurgencies. We show that the effect of the Venezuelan migration shock on the support for the right is much more pronounced in these municipalities. Moreover, ‘bad’ past experiences with left-wing ideologies will show stronger effects. We evaluate this idea by testing whether municipalities that experienced the Colombian internal armed conflict directly show disproportionate political effects to Venezuelan migration inflows. Our results strongly support the validity of these hypotheses. While at best suggestive, this pattern is consistent with the existence of electoral misinformation.

In sum, our analysis suggests that larger migration shocks increase voter turnout and shift votes from left- to right-wing political ideologies. These effects are potentially explained by electoral misinformation, in addition to other channels that have been studied before, such as the economic effects of migrants in hosting labour markets. In turn, they are not likely to be explained by cultural differences between migrants and host communities.

Dustmann, C and I Preston (2006), “Is immigration good or bad for the economy? Analysis of attitudinal responses”, in The Economics of Immigration and Social Diversity, pp. 3–34. Emerald Group Publishing Limited.

Dustmann, C, U Schonberg and J Stuhler (2016), “The impact of immigration: Why do studies reach such different results?” Journal of Economic Perspectives 30(4): 31–56.

Facchini, G and A M Mayda (2009), “Does the welfare state affect individual attitudes toward immigrants? Evidence across countries”, The Review of Economics and Statistics 91(2): 295–314.

Mayda, A M (2006), “Who is against immigration? A cross-country investigation of individual attitudes toward immigrants”, The Review of Economics and Statistics 88(3): 510–530.