How does privatisation impact workers? Evidence from Brazil 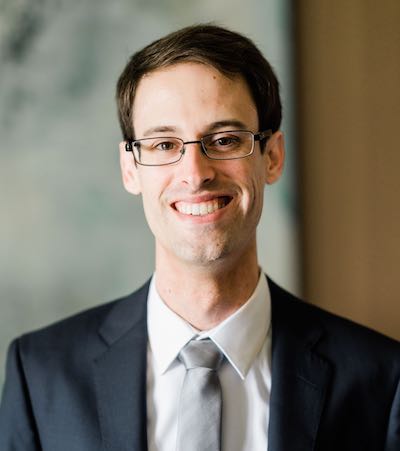 Assistant Teaching Professor at the University of California, San Diego

When SOEs are privatised their employees’ wages, particularly for the less educated, fall dramatically, which also has negative spillover effects on workers at other private sector firms.

A discussion of the key takeaways from this research is available as a podcast here.

In many countries, privatisation of state-owned enterprises (SOEs) remains a popular policy tool for debt-burdened governments to quickly raise large amounts of revenue. Often, however, workers at state-owned enterprises oppose privatisation, fearing it will lead to layoffs and lower wages. Despite these fears, there is limited empirical evidence on how privatisation impacts workers. Most of the academic literature on privatisation focuses on the impact of privatisation on firm profits and efficiency (Megginson and Netter 2001, Porta and Silanes 1999). However, the source of these gains is not always clear, and one possibility is that firms increase profits through lower wages and employment. Therefore, while privatisation may benefit firm owners, it could lead to decreases in worker welfare.

A useful case to consider

To understand the privatisation process and how it might affect workers it is helpful to discuss the case of Telebrás, a large Brazilian telecommunications company that was privatised in 1998. Before privatisation, employees of Telebrás organised multiple protests and filed lawsuits seeking to block the privatisation sale, fearing it would result in lower wages and employment. Later, they sought to include stipulations regarding employment and compensation into the purchase (Guimarães 2007). In the end, these stipulations were not included when Telebrás was sold in 1998. After privatisation, unions in the telecommunications industry report losing bargaining power with the new owners, leading to layoffs and worse compensation packages.

In my study, I use matched employer-employee data from Brazil which contains earnings and demographic information for the entire formal sector of Brazil. To estimate the impact of privatisation on workers, I compare earnings for workers in SOEs that are privatised to otherwise similar workers both before and after privatisation. Given the rich administrative data, I am able to construct a valid control group for the privatised workers by matching each privatised worker to a worker of similar age employed in the same occupation and industry.

How are workers at privatised SOEs affected? 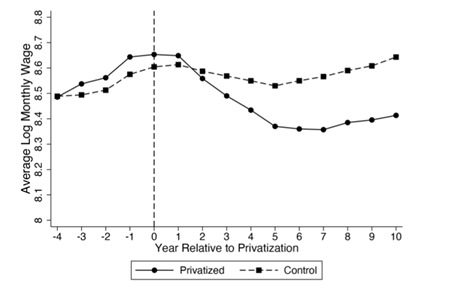 This shows that on average, workers in privatised SOEs lose significant earnings following privatisation. However, it is unclear how this loss is distributed across workers. It could be that politically connected managers are able to inflate their wages in SOEs relative to private-sector firms. To explore this possibility, Figure 2 plots the impact of privatisation on log monthly earnings for three different groups: workers without a high-school degree, worker with a high-school degree, and workers with a college degree. As can be seen in the Figure, earnings losses are by far the largest for workers without a high-school degree (roughly twice as large), suggesting the losses are not solely due to large rents for politically connected managers. While privatisation led to persistent earnings losses for all groups, the losses are greatest for the least economically advantaged group.

Figure 2: Earnings losses are by far the largest for workers without a high-school degree 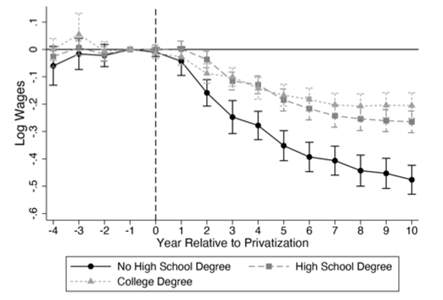 These direct impacts of privatisation are large and economically meaningful. However, they will underestimate the total impact of privatisation on workers in the presence of spillovers to the private-sector labor market. Theoretically, these spillovers might arise for several reasons. For example, one reason is that SOEs hire many workers and pay high wages, which could lead to higher wages at private-sector firms who need to compete for workers against these SOEs.

Do these effects spill over?

To test for spillovers, I construct a measure of exposure to privatisation which traces how the impacts of privatisation propagate to private-sector firms connected to privatised SOEs by labor mobility. For example, before privatisation, a large fraction of electrical technicians were employed in SOEs. Therefore, electrical technician jobs at private-sector firms were highly exposed to privatisation. I find that exposure to privatisation is associated with a significant decline in wages. To put the magnitude of the spillovers in perspective number in perspective, I compute a simple summary calculation which suggests that privatisation decreased the aggregate wage in the formal sector of the Brazilian labor market by about 3 percent. Roughly one-third of this effect attributable to the direct effect on privatised workers. That is, only considering the impact of privatisation on workers employed at the privatised SOEs, the aggregate wage in Brazil would have declined by about 1 percent following privatisation. The spillovers magnify this direct effect, leading to a 3 percent overall decline in wages. Therefore, in this context, incorporating spillovers is crucial for understanding the total impact of privatisation on workers.

Editor's note: This is an updated version of a previous VoxEU Column.