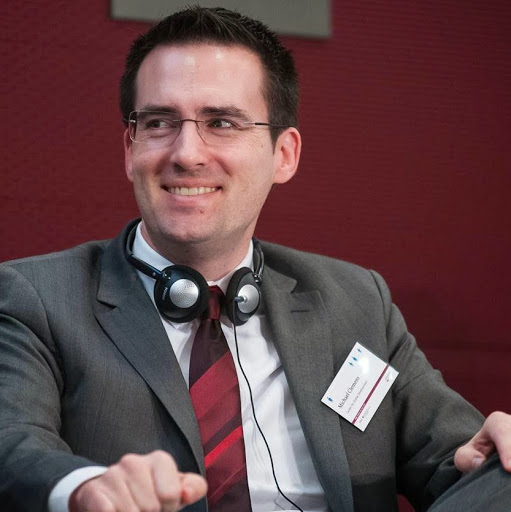 Aid agencies have invested in the idea that economic development reduces emigration from poor countries, but the experience has been very different

Many people emigrate from developing countries to find economic opportunity overseas (Grogger and Hanson 2011). So, it seems simple: when their home countries become more prosperous, the same people should be less likely to emigrate. This powerful idea has compelled governments around the world to invest billions of dollars in promoting economic development to address the ‘root causes of migration’.

But the typical experience of developing countries has been the opposite. In poor countries, emigration tends to rise along with development. Countries that have sustainably grown from low income (like Mali or Afghanistan) to upper middle income (like Colombia or Turkey) have seen their emigration rate, on average, almost triple. This striking pattern contains lessons not just about the work of aid agencies tasked with deterring migration, but about the nature of development itself.

Economists have known for some time that people are much more likely to emigrate from relatively prosperous developing countries than from the poorest countries, or from the very richest countries (Dao et al. 2018). This ‘inverse-U’ relationship between emigration and development today was also seen in European emigration during the first era of globalisation, before 1914. Economic historians dubbed it the “emigration lifecycle” (Hatton and Williamson 1998).

But doubts have persisted in the research literature: Do these snapshots at one moment in time reflect the path that countries take across time? Is the pattern driven by a few tiny, high-emigration countries? Is it driven by short-range emigration to neighbouring poor countries? The emigration lifecycle seems so counterintuitive that many observers, understandably, have trouble believing it.

In a new paper (Clemens 2020), I comprehensively test the hypothesis of the emigration lifecycle. I use an updated version of the comprehensive global country-to-country migration dataset first collected by Özden et al. (2011), which remains the only dataset with global coverage and a standardised definition of migration (net, permanent) and migrant (by country of birth, regular and irregular).

Figure 1 pools together all available data for developing countries between 1960 and 2019. The horizontal axis shows real income per capita; the vertical axis shows emigrants as a fraction of the origin-country population. Panel a shows people from all origin countries, going to all destination countries. Panel b shows only people emigrating to high-income destination countries. Panel c shows what panel b looks like when small origin countries (below 2.5 million population) are removed. 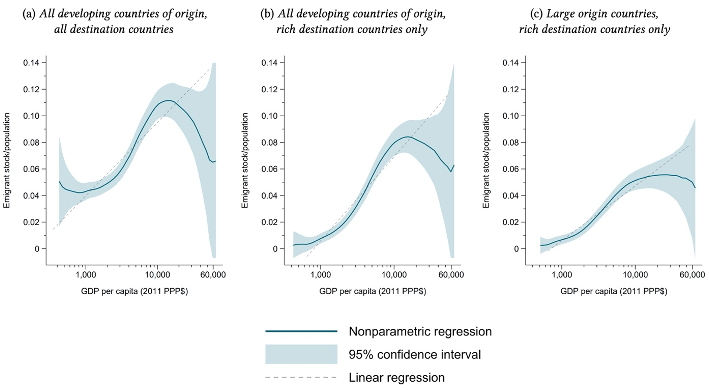 This relationship is highly robust. In all three graphs, the emigrant fraction of the population is between 5 and 8 percentage points higher in upper-middle-income countries (around US$10,000 GDP per capita) than it is in low-income countries (around US$1,000 GDP per capita) (adjusted to US prices). The emigration life cycle is a generalised feature of developing countries; it is not driven by microstates and is not driven by migration to other developing countries.

Figure1 pools all the data together, meaning that it combines snapshots of all developing countries once a decade from 1960 to present. But does it accurately represent the path that the average poor country follows as it, in its own unique circumstances, experiences sustained development?

Figure 2 shows one way to visualise within-country changes over time. It includes only those developing countries that started out poor (below US$2,000 GDP per capita) and then grew. The horizontal axis is economic growth; the vertical axis is the net outflow of emigrants. Analysis of this kind removes all effects on emigration prevalence that arise from country traits that do not change over time, such as geographic location or initial diaspora size.

Figure 2 Net emigration flows and economic growth, using within-country changes only, for countries that started out below $2,000 GDP per capita, 1960–2019 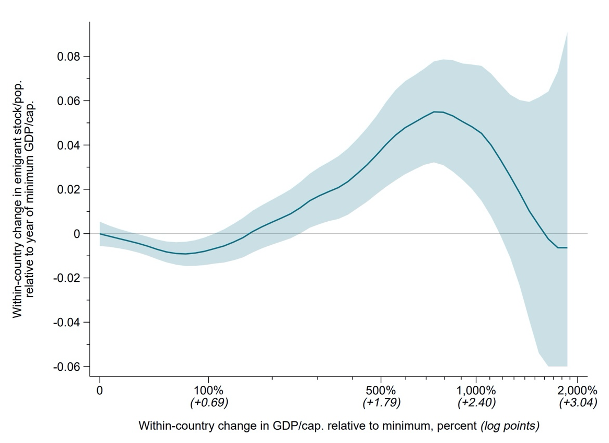 In the pooled data, a doubling in the level of GDP per capita is associated with a 38% increase in the stock of emigrants. When the analysis considers only within-country changes over time, economic growth that doubles GDP per capita is associated with a net outflow of emigrants that raises emigration prevalence by 35%. In other words, the collection of snapshots in Figure 1 does indeed accurately represent the approximate path that average developing countries follow over time.

An important channel for the emigration lifecycle is that rising income per capita is very strongly associated with rising investment in education – which both inspires and facilitates emigration – as Dao et al. (2018) found. Other important channels appear to be demographic transition, which typically produces a surge of youths into the labour force, and structural transition from rural agriculture toward an urban economy of services and manufacturing.

How our intuition misleads

Why does our intuition go so far astray? Why would people become less likely to stay in places with more opportunity? One pitfall for our intuition is that people who earn more in migrant-origin countries often do so by acquiring things – like education – that have even higher returns in migrant destination countries which can actually raise their relative bump to earnings from emigrating.

Another pitfall is that countries can behave very differently from individuals. Suppose, against the evidence, that both people with low education and people with high education would be less likely to emigrate if they earned more in the home country. It could nevertheless be the case that economic development raises emigration prevalence for the country, as long as more educated people are more likely to emigrate than less educated people. This is because development does not just raise earnings within those two groups. It also typically shifts people from low education (a low emigration group) to high education (a high emigration group) (Clemens and Mendola 2020).

In short, economic development is a spectacularly complex and long-term unfolding of specialisation within an economy, a process that involves countless structural transformations. It means far more than simply more money in potential migrants’ pockets. That process typically goes hand in hand with large increases in human mobility.

What this means, and doesn’t mean

The robust empirical fact of the emigration lifecycle does not bolster a case for slashing aid to migrant-origin countries. Such a policy prescription rests on the assumption that a core goal of development assistance is to deter migration, which emerges from a political discussion unmoored to evidence (Caselli 2019). Nor does this empirical fact bolster a case for raising aid to migrant-origin countries. Instead, a sensible conclusion for aid agencies is simply that development assistance “should be used for other purposes” (Clist and Restelli 2020).

Caselli, M (2019), “‘Let Us Help Them at Home’: Policies and Misunderstandings on Migrant Flows Across the Mediterranean Border,” Journal of International Migration and Integration 20(4): 983–993.

Grogger, J and G H Hanson (2011), “Income maximization and the selection and sorting of international migrants”, Journal of Development Economics 95(1): 42-57.