Impact of amnesty programmes: Evidence from undocumented refugees in Colombia 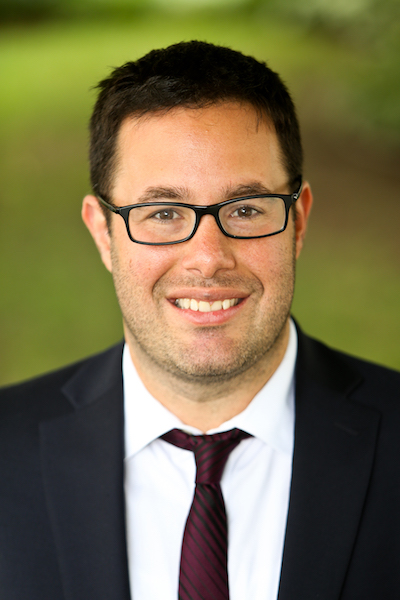 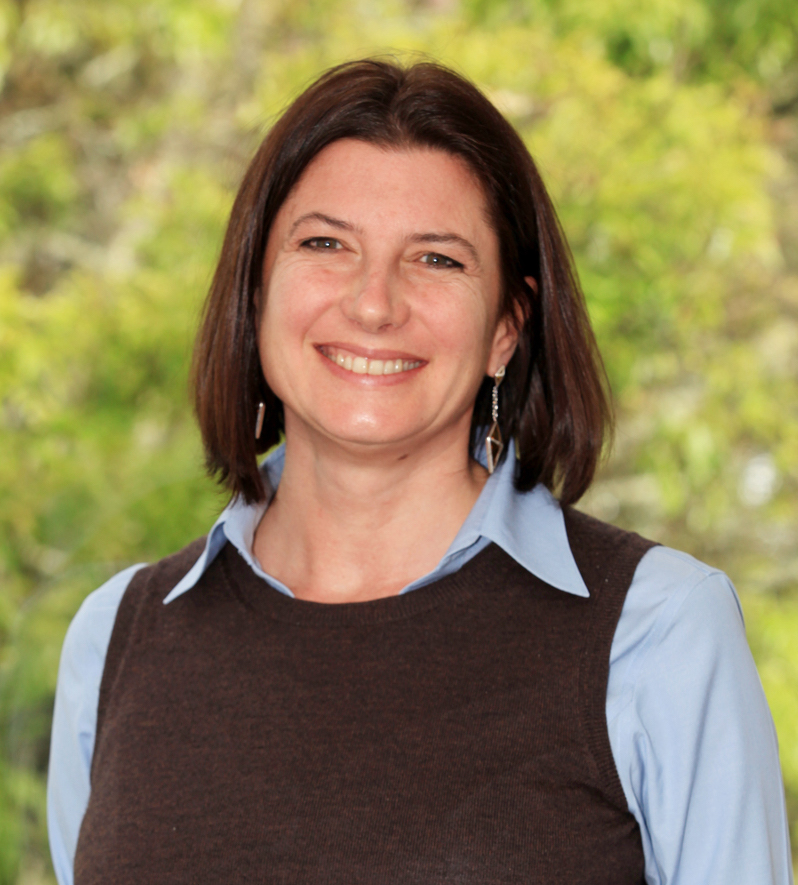 In early August of 2018, outgoing Colombian President Juan Manuel Santos signed a decree to provide amnesty to nearly 500,000 undocumented Venezuelan immigrants and refugees,  granting them regular migratory status that allowed them to stay, work legally, and access public services such as health and education.

Such a generous policy offering full amnesty to undocumented immigrants is very uncommon.  Presently, many countries hosting large communities of undocumented immigrants would not consider such policies for many reasons, including the perception that such a policy would put pressure on wages and employment rates of host-country nationals. While there is some evidence on how similar amnesty programmes affect migrant outcomes (e.g. Kossoudji and Cobb-Clark 2002, Bratsberg et al. 2002, Kaushal 2006, Amuedo-Dorantes et al. 2007), little is known about how this type of migratory amnesty affects labour markets as a whole. Without such evidence, perceptions of declining wages and unemployment will likely be the dominating force maintaining the status quo of large and growing undocumented populations.

In our recent study (Bahar et al. 2020), we aim to build on the evidence by exploring the case of Colombia’s presidential decree. We examine the labour market impacts of the issuance of Permiso Especial de Permanencia (PEP), a two-year visa that provides access to work and social services to undocumented Venezuelan migrants and refugees.

Identifying migrants and the launch of the PEP visa

The worsening humanitarian crisis caused by the authoritarian regimes of Hugo Chávez and his successor Nicolás Maduro have led to the massive inflow of Venezuelans to Colombia over the past few years. The United Nations estimates that until 2020, about 5.2 million Venezuelans would have left the country, and about 1.8 million would be hosted by Colombia. Many of these immigrants are undocumented, either having overstayed the 180 days allowed to all Venezuelans visiting Colombia or having entered the country through irregular or unofficial crossing points.

Between April and June 2018, the Colombian government ran a nationwide census to register all undocumented Venezuelan migrants residing in Colombia. The census (known as Registro Administrativo de Migrantes Venezolanos, or RAMV) registered about 442,000 Venezuelans (Figure 1 represents the geographic distribution of all registry points in the country). The initial purpose of the census was to identify and collect basic demographic information on the undocumented immigrants residing in Colombia, and was not originally intended to serve as a basis for revising individuals' migratory status. Yet, the presidential decree in August 2018 announced that immigrants who registered in RAMV would be eligible to receive the PEP visa. Unlike other cases of countries granting regular migratory status on a large scale to undocumented migrants, receiving the PEP visa was not conditional on any eligibility criteria aside from having registered in RAMV. 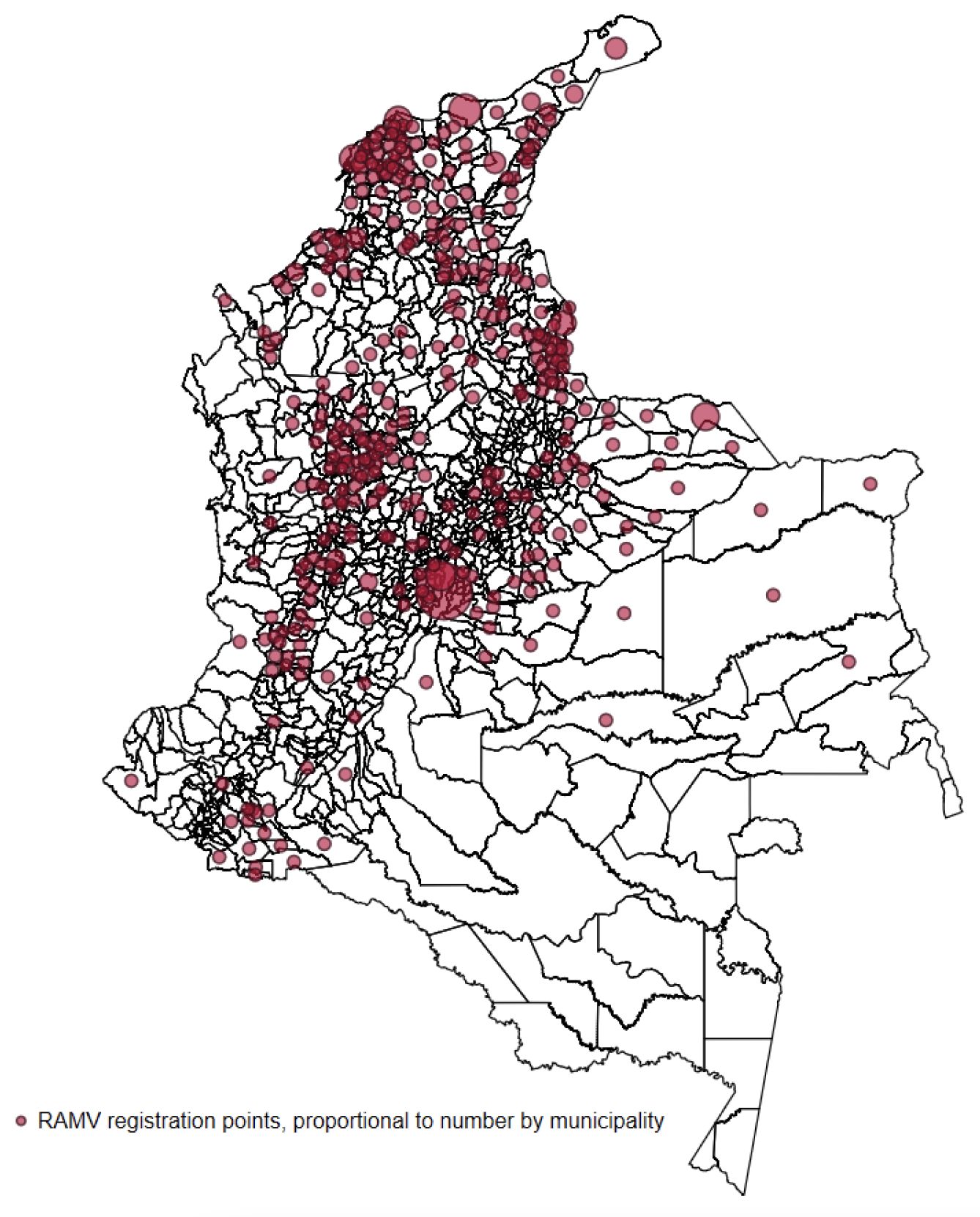 Our study relies on confidential administrative data with information on individuals who received the PEP visa in each department (i.e. state) of Colombia, which we link to labour market outcomes from representative household surveys conducted between January 2017 and February 2020. We focus our analysis on the impacts of the amnesty programme on hours worked, monthly wages, employment, and labour force participation on three samples of workers: Colombian natives, Venezuelan migrants, and Colombian returning migrants (mostly from Venezuela, also due to the humanitarian crisis). We then examine the impacts of the issuance of PEP on workers in both formal and informal sectors.

To deal with concerns regarding the self-selection of undocumented migrants into certain geographic areas, we exploit the fact that each undocumented migrant who registered in the nationwide government survey was granted a registry number that was exogenously allocated at the time of registration. Based on this number, individuals were allocated to one of 22 predefined time windows for applying for the visa. According to government officials, scattering the applications across several months was done to avoid overloading public servants in charge of processing applications. As shown in Figure 2, we find sufficient variation on the average registration days based on the time window assigned to immigrants registered in each department. Using the exogenous assignment of time windows for when immigrants were allowed to apply for the PEP visa, we compare labour outcomes between departments with different average time windows, before and after the programme was rolled out in August 2018.

Figure 2 Distribution of registration days for the PEP visa 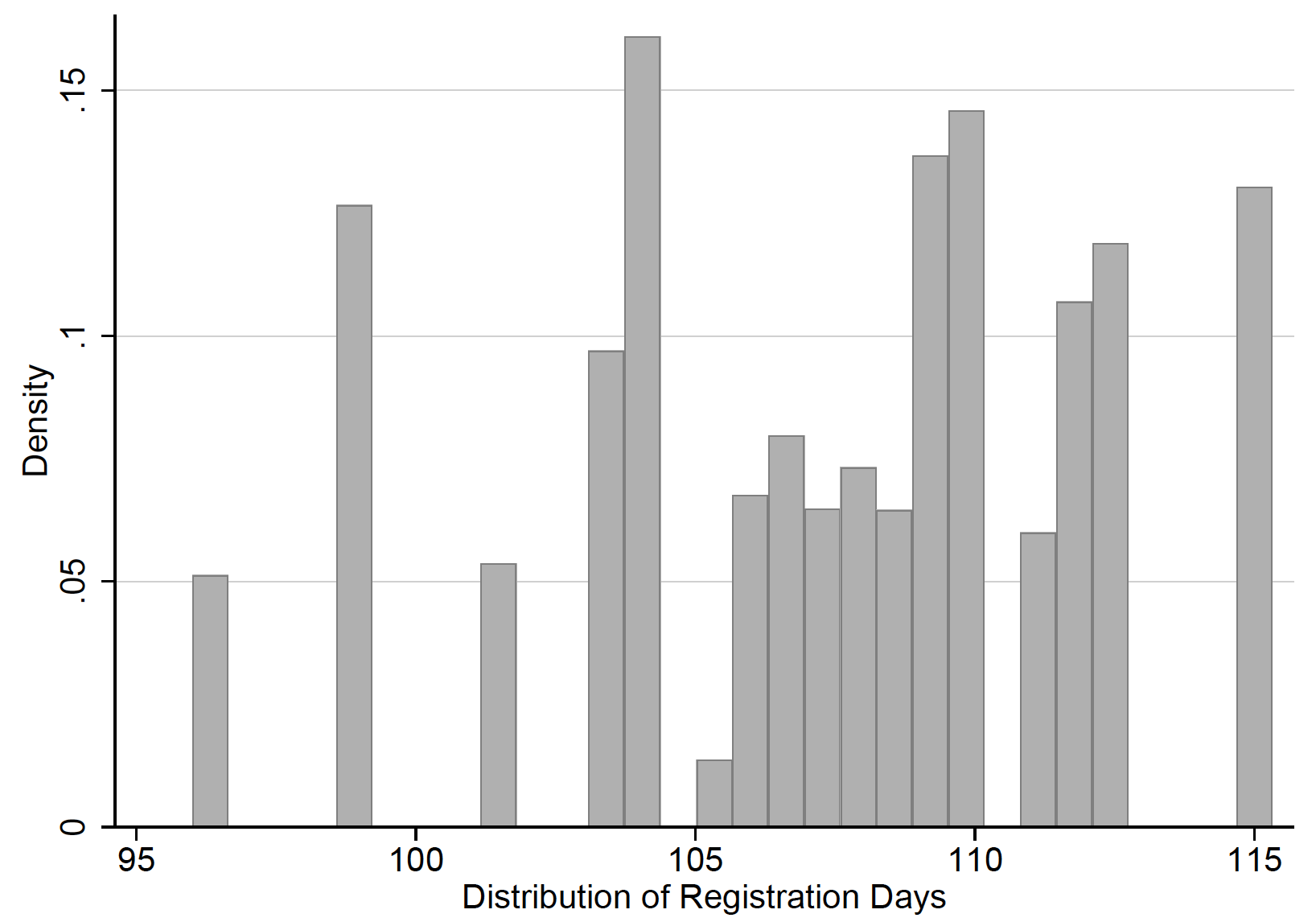 We do not find any large or significant effects of the PEP program on any of the outcomes that we study, except for formal employment. In particular, we observe that a two-fold increase in new PEP-holders (per 100,000 inhabitants) results in a drop in formal employment of 0.1 percentage points for natives. These correspond to small effects based on our calculations. Accounting for the totality of the new visa holders, the drop corresponds to only 0.15% according to the mean of formal employment for Colombian workers. We further find that these effects are predominantly concentrated on the employment rates of workers who are highly educated (e.g. those with at least a high-school degree) as well as female workers.

Interestingly, we do not observe any significant effects of the programme on hours worked, wages, or labour force participation of Colombian workers in the formal or informal sectors; nor do we observe changes on the employment rate of Colombian workers in the informal sector. A graphical summary of our heterogenous results focusing on labour market outcomes of natives in the formal labour market is presented in Figure 3. 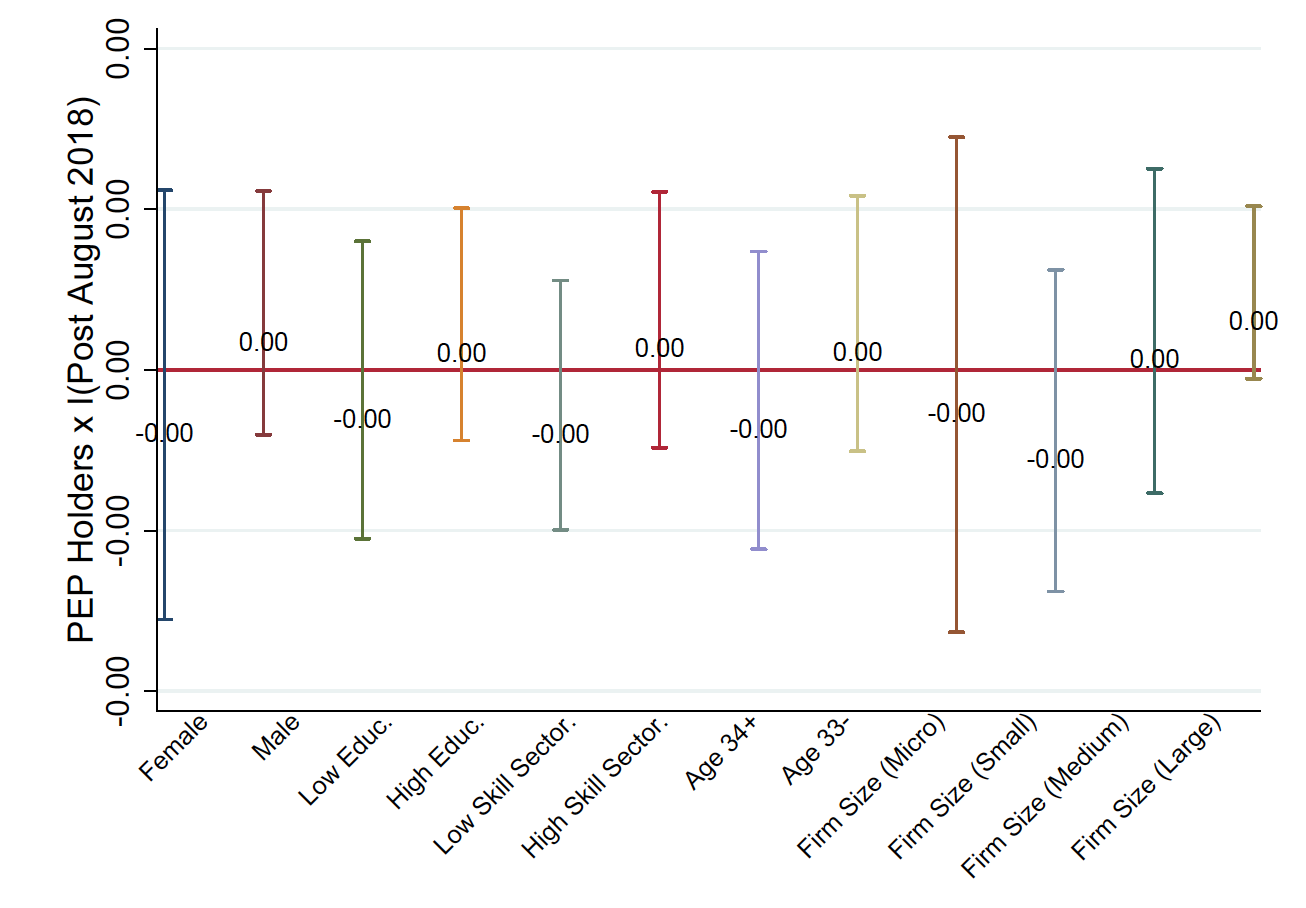 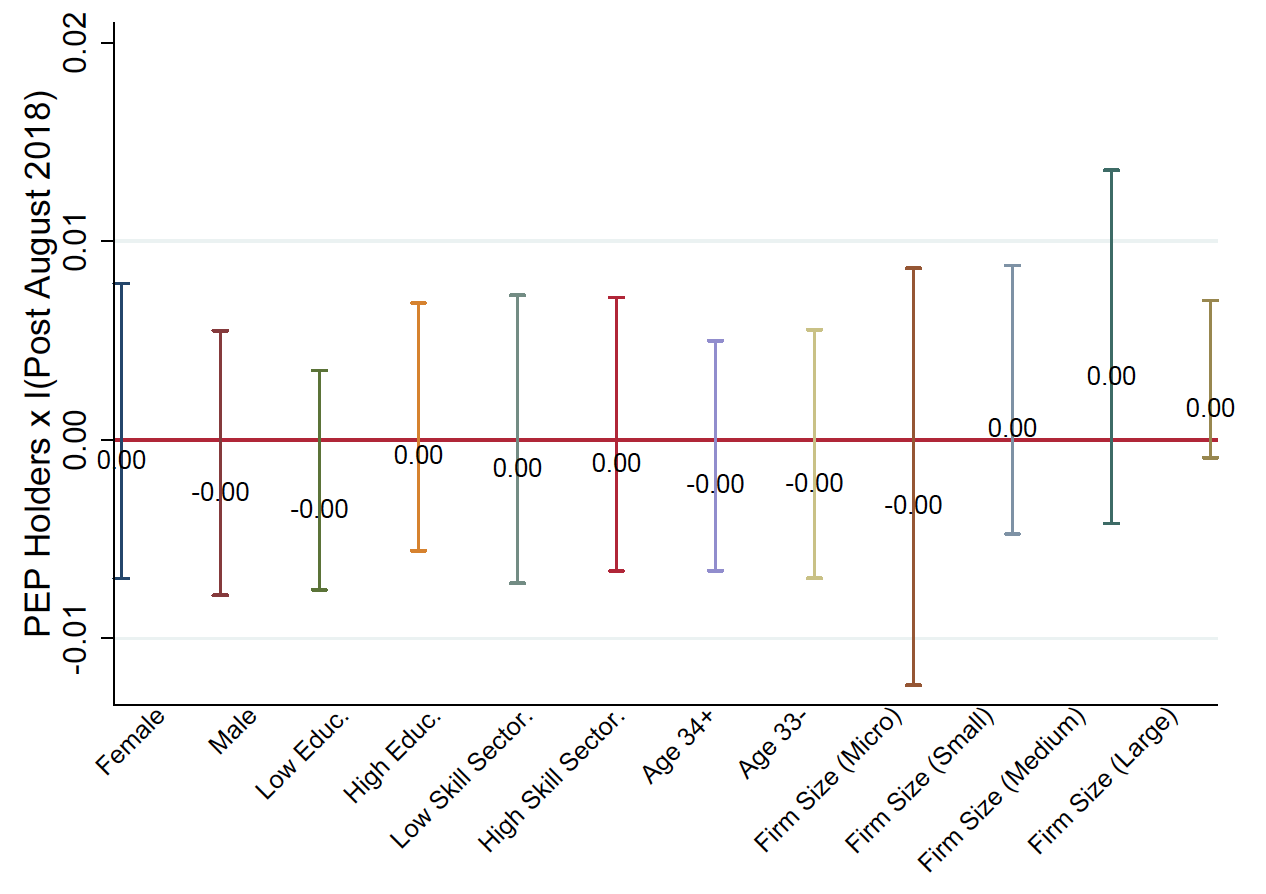 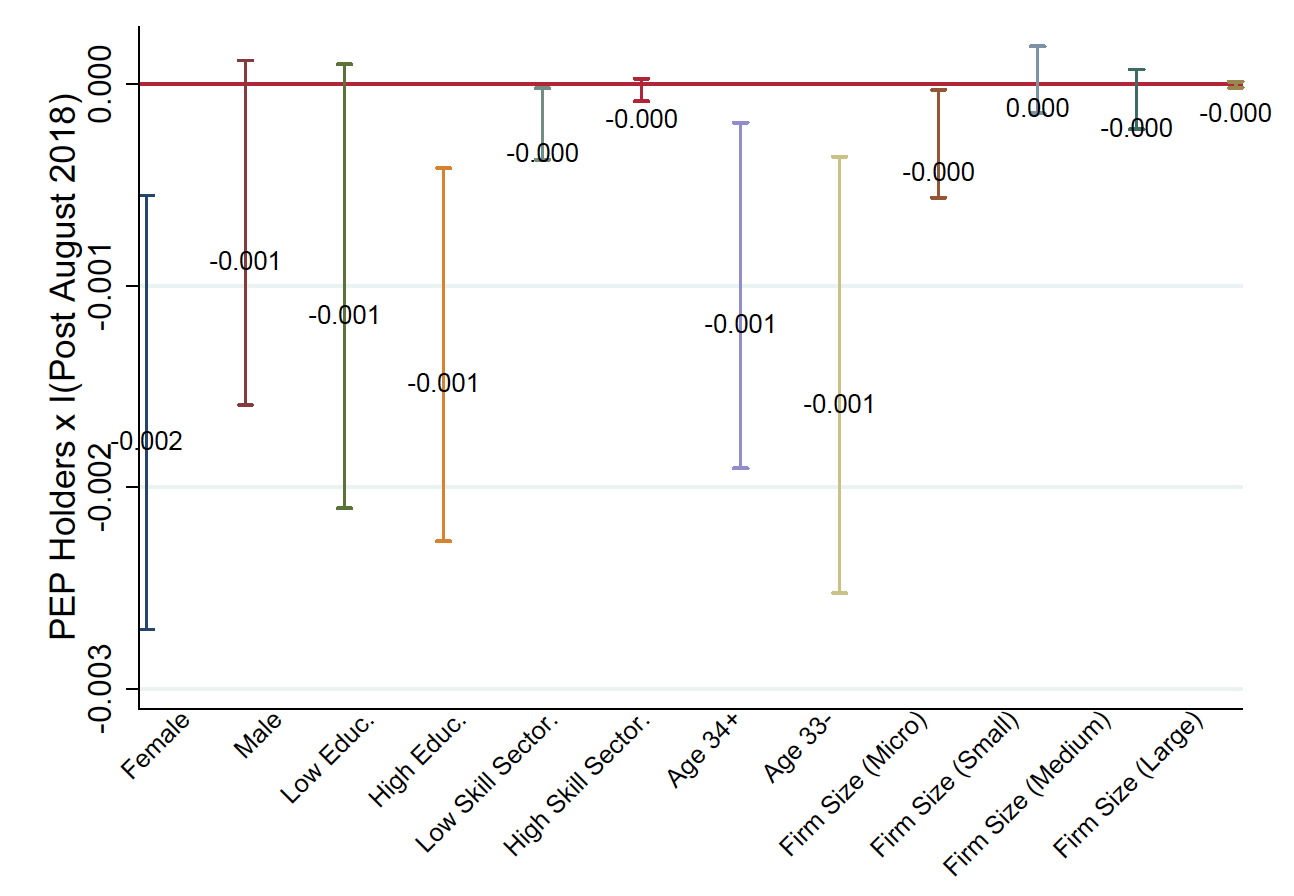 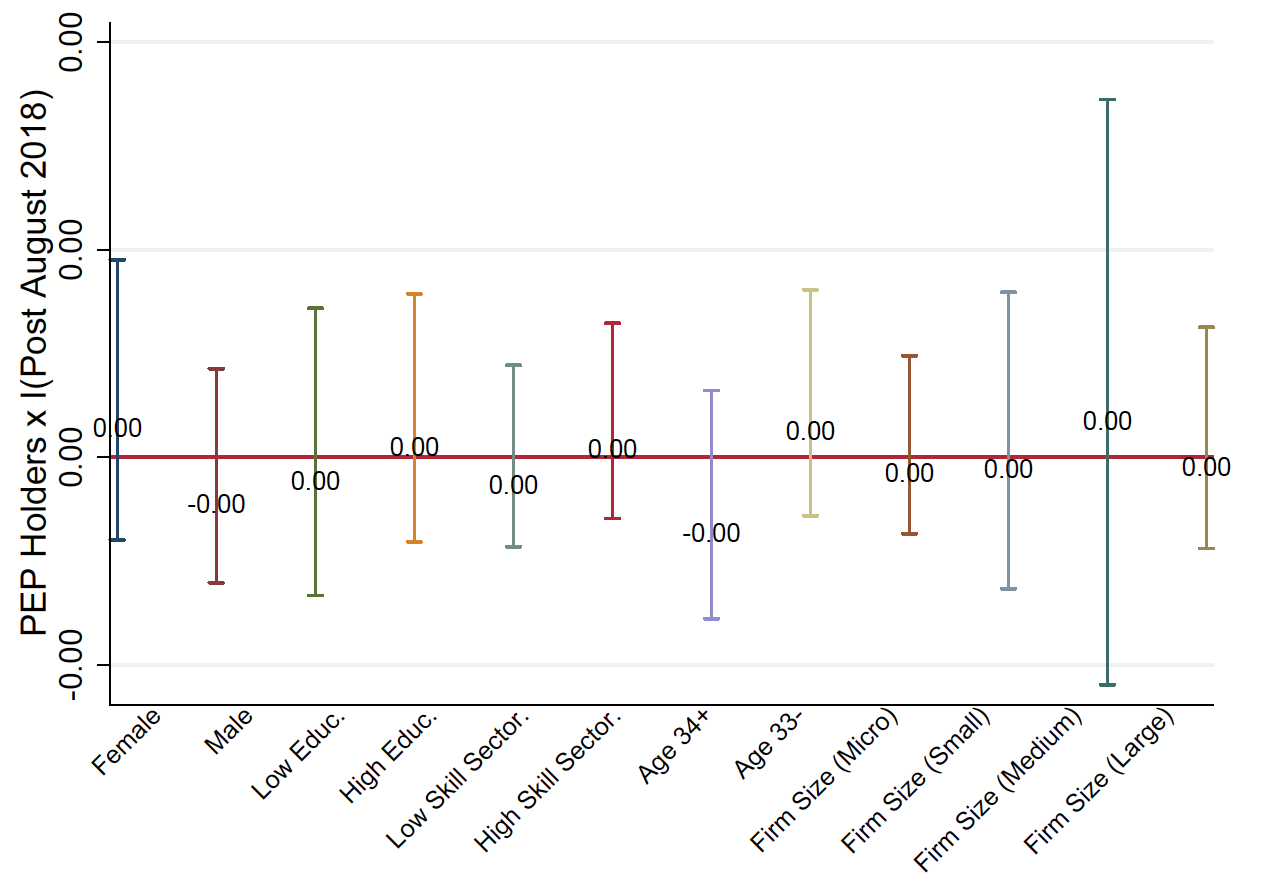 How is it possible that the regularisation of approximately half a million migrants has only induced negligible effects on the formal employment of native workers? We pose several explanations for our results.

Large-scale amnesty programmes represent a politically sensitive issue. Some countries prefer a piecemeal approach while others ban employment rights altogether to prevent labour market conditions from deteriorating within the host-country population. Imposing strict regulations for accessing formal labour markets may push migrants to work in informal labour markets, which affects the most vulnerable workers. These decisions are not based on evidence and mostly reflect the fears and prejudices of the government and the population. Our study offers consequential lessons for developing countries with large flows of migrants that are considering implementation of similar policies but lack comparable data or opportunities for identification.

Bahar, D, A M Ibañez, and S Rozo (2020), “Give Me Your Tired and Your Poor: Impact of a Large-Scale Amnesty Program for Undocumented Refugees”, IZA Discussion Papers No. 13743