Push and pull factors: Evidence from international migration from Nepal 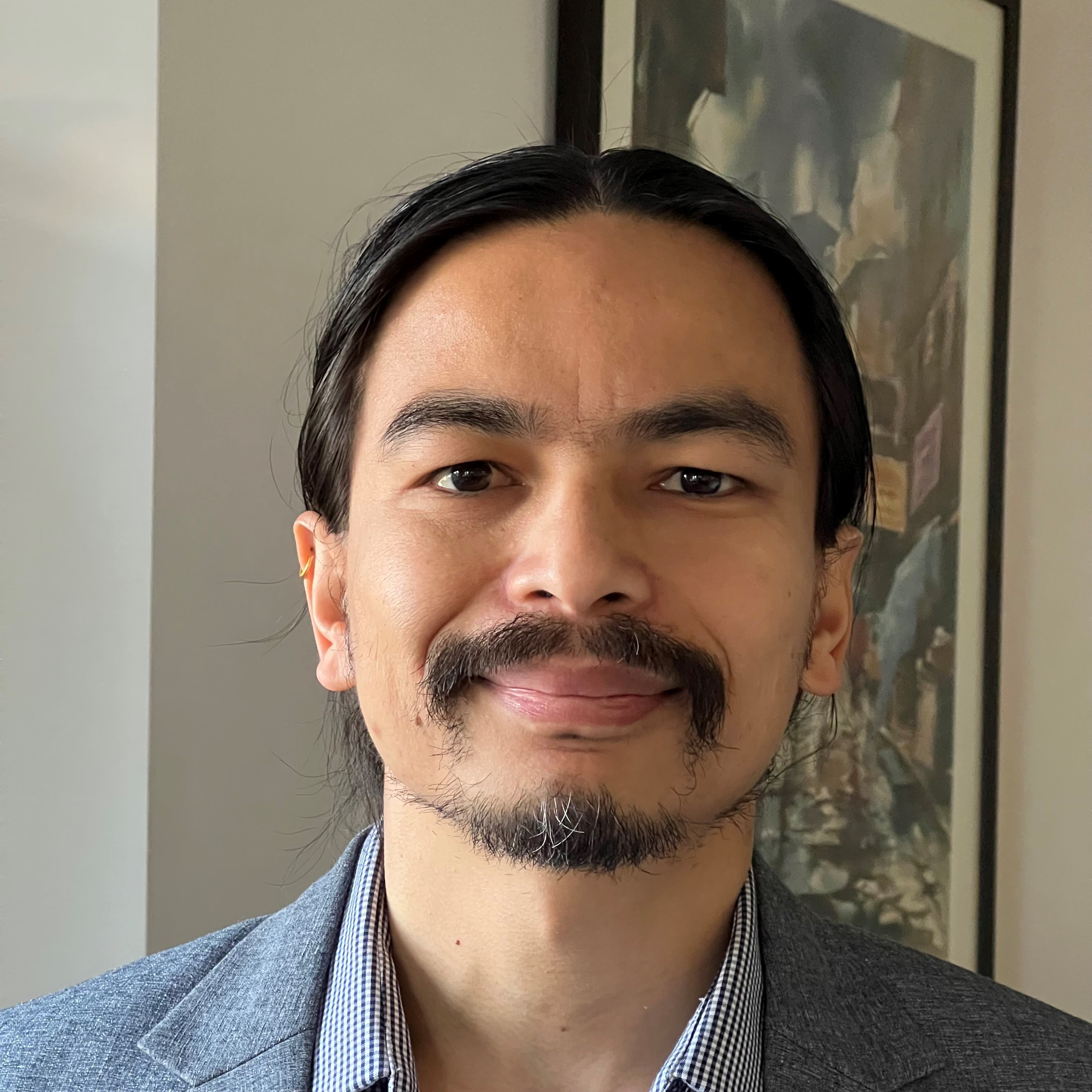 Liquidity restraints, conflict and demand for labour all play a role in pushing or pulling people to migrate to particular destinations

Large differences in earnings, and consequently welfare, persist across countries for workers with similar profiles (Clemens et al. 2019). This implies that people could increase their earnings and welfare by migrating to a country that offers a higher return for their labour. Empirical evidence also finds that international migrants increase their earnings severalfold and improve welfare for themselves and their families by migrating (Gibson et al. 2011, Mobarak et al. 2021).

Despite this, in 2020 only 3.5% of the global population lived in a country that was different from their country of birth (UNDESA 2020). The high returns to migration and the apparent low migration rate raises questions as to why more people do not migrate and what drives these migration decisions. Does poverty drive people to migrate, or does it constrain their ability to do so owing to the large costs of migration? Does conflict push people to migrate? Does migration respond to increases in economic demand for migrants? How do these factors determine who migrates and where they migrate to?

I investigate these questions in the context of low-skilled migration from Nepal (Shrestha 2017). I examine these relationships through the lens of a simple theoretical framework of migration decisions. In the framework, people value consumption as well as amenity (peace) and make migration decisions based on the costs – which along with the returns vary by destination – in the presence of liquidity constraints. The key insight of my paper is that the migration response to shocks in income, peace and migrant demand differs by destination as well as by the portion of the wealth distribution affected by the shock.

I test the predictions derived from this framework in the context of low-skilled migration from Nepal in a panel of 452 villages spread across the country. The analysis uses data observed in 2001, 2008, and 2011.

Descriptive evidence of migration patterns and costs in Nepal is suggestive of large liquidity constraints inhibiting migration and restricting the destination choice. 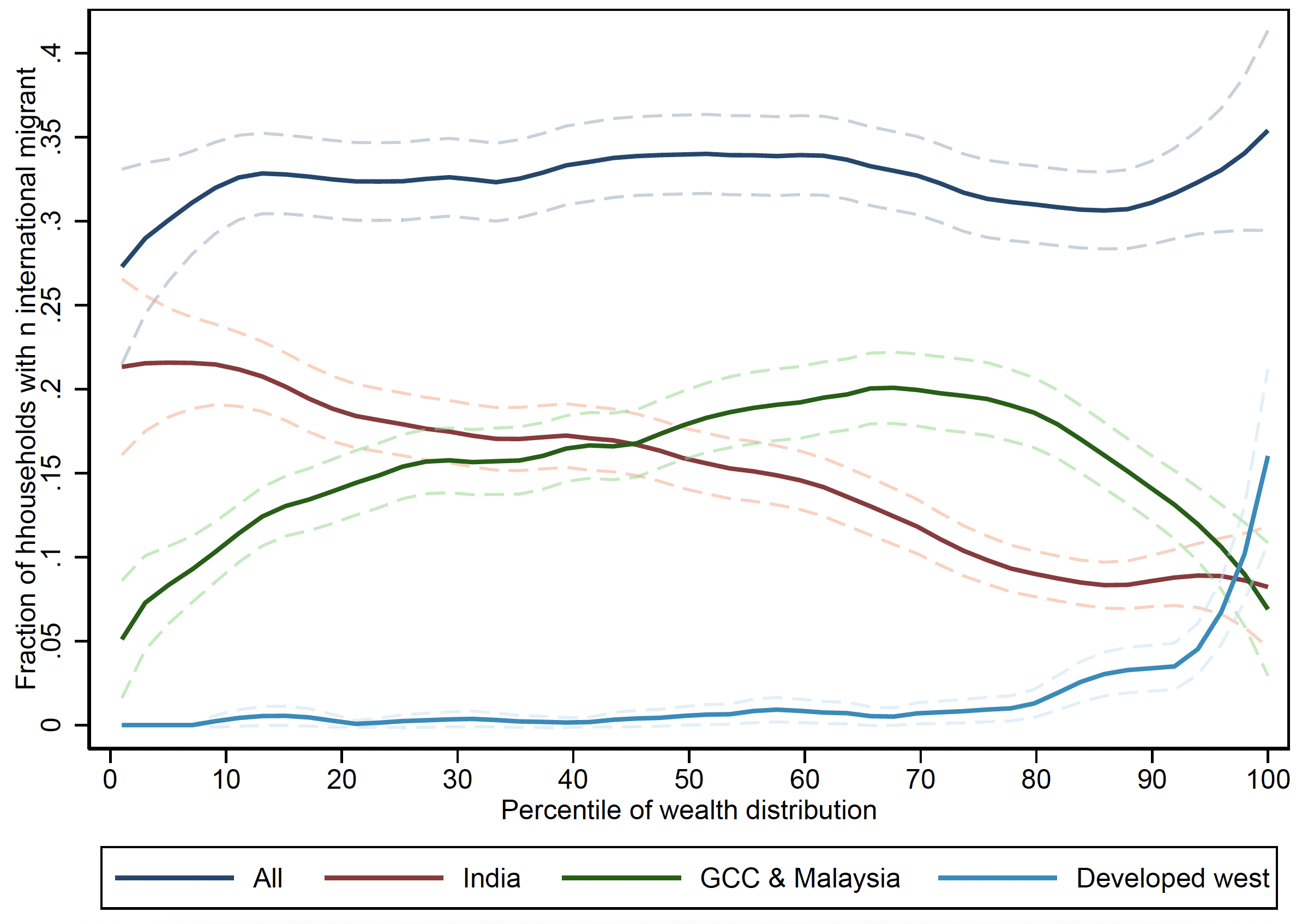 Note: This figure shows the migration probabilities for households at various points in their wealth distribution. Migration probabilities are shown for any destination, to India, to countries in the Persian Gulf and Malaysia, and to developed countries in North America, Europe, and Australia. The solid lines trace the local linear regression fits and dashed lines around them indicate the 95 % confidence intervals.

In this context, I look at how migration rates respond to income shocks due to deviations in rainfall during the monsoon months. Monsoon rain is crucial for the incomes of Nepali households due to their high dependence on rainfed agriculture. A one-standard deviation higher monsoon rainfall (relative to the historic average) increases farm income by 16% (about NPR 2,400) and average consumption per-capita by 7%.

I find that higher incomes induced by higher rainfall increase migration to India but have no effect on migration to other destinations. A one-standard deviation increase in monsoon rainfall increases village level migration rates to India by 0.8 percentage points (a 31% increase relative to average migration rates in 2001). In fact, increased incomes for poor households relieve the liquidity constraints they would face when migrating to India. However, the income increases due to rainfall is too small for households that are too liquidity constrained to migrate to non-India destinations. For instance, the likely range of income gains from increased rainfall amount to less than 2% of the total cost of migration to the Gulf countries or Malaysia.

Conflict lowers the amenity value of staying in the same place by threatening people’s safety and security as well as directly lowering consumption due to the disruption of production and supply chains. Conflict affects all, but it disproportionately affects richer households as they stand to lose more from the conflict.

In the context of Nepal, the nature of conflict took some dramatic turns which generate plausibly exogenous variations in conflict intensity across the country. The Maoist insurgency started out as an anti-feudal anti-elite armed movement in 1996 by a fringe left-wing party that slowly gained momentum killing around 2,000 people by 2001, mostly in the mid- and far-western regions of the country.

An unexpected historic incident – the then crown prince killing the entire Royal family, including himself, over family dinner – brought in a new monarch who was less reluctant to deploy the army against the insurgents. The conflict soon turned deadly, resulting in the deaths of over 13,000 people between 2002 and 2006. An unlikely coalition between the insurgents and political parties overthrew the monarchy in 2006. The elections held in 2008, where the Maoists emerged as the largest democratically elected party, further cemented the end of the insurgency and armed conflict in the country.

Figure 2 shows the variation in the intensity of conflict across time and locations which I exploit to tease out the impact of conflict intensity on migration. 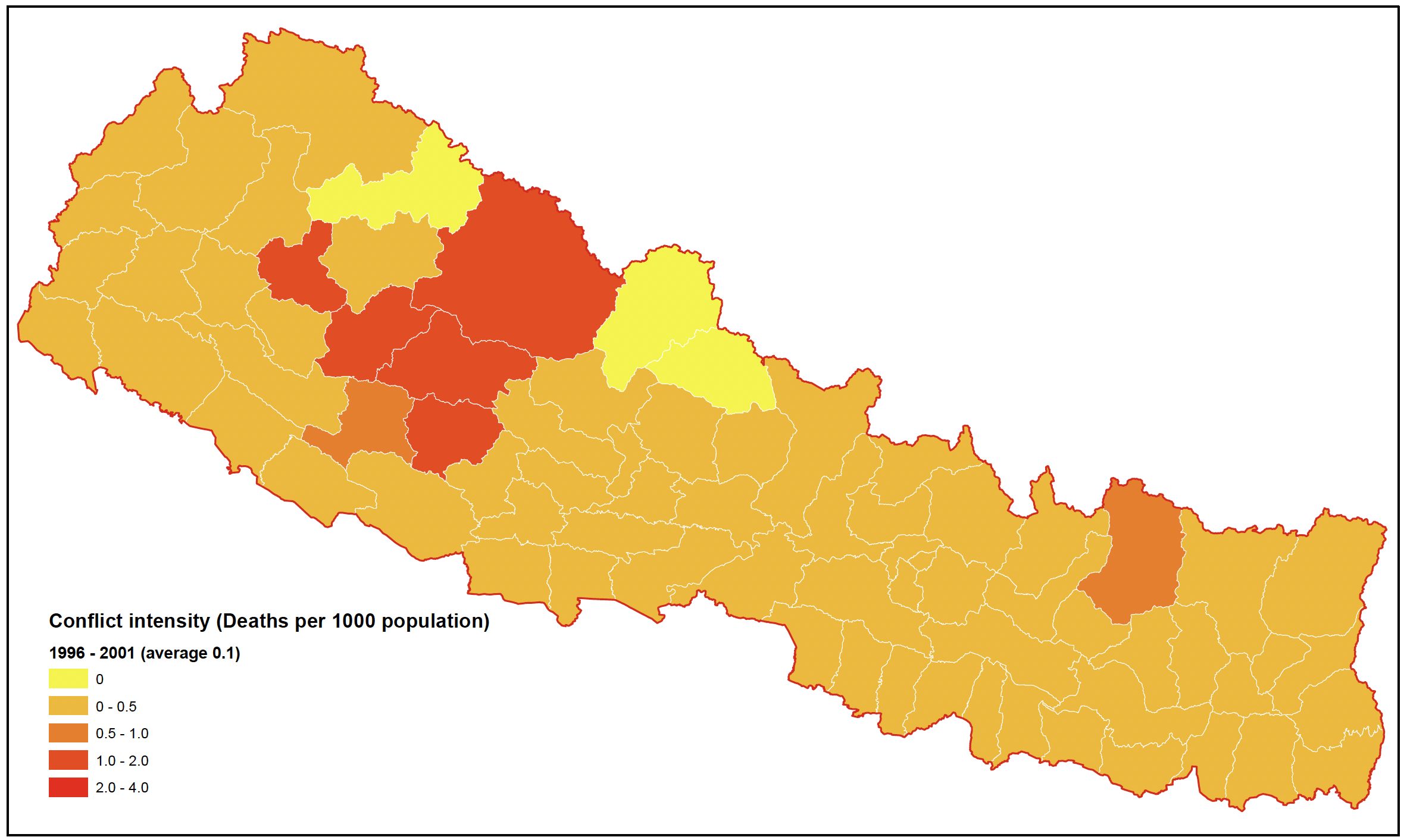 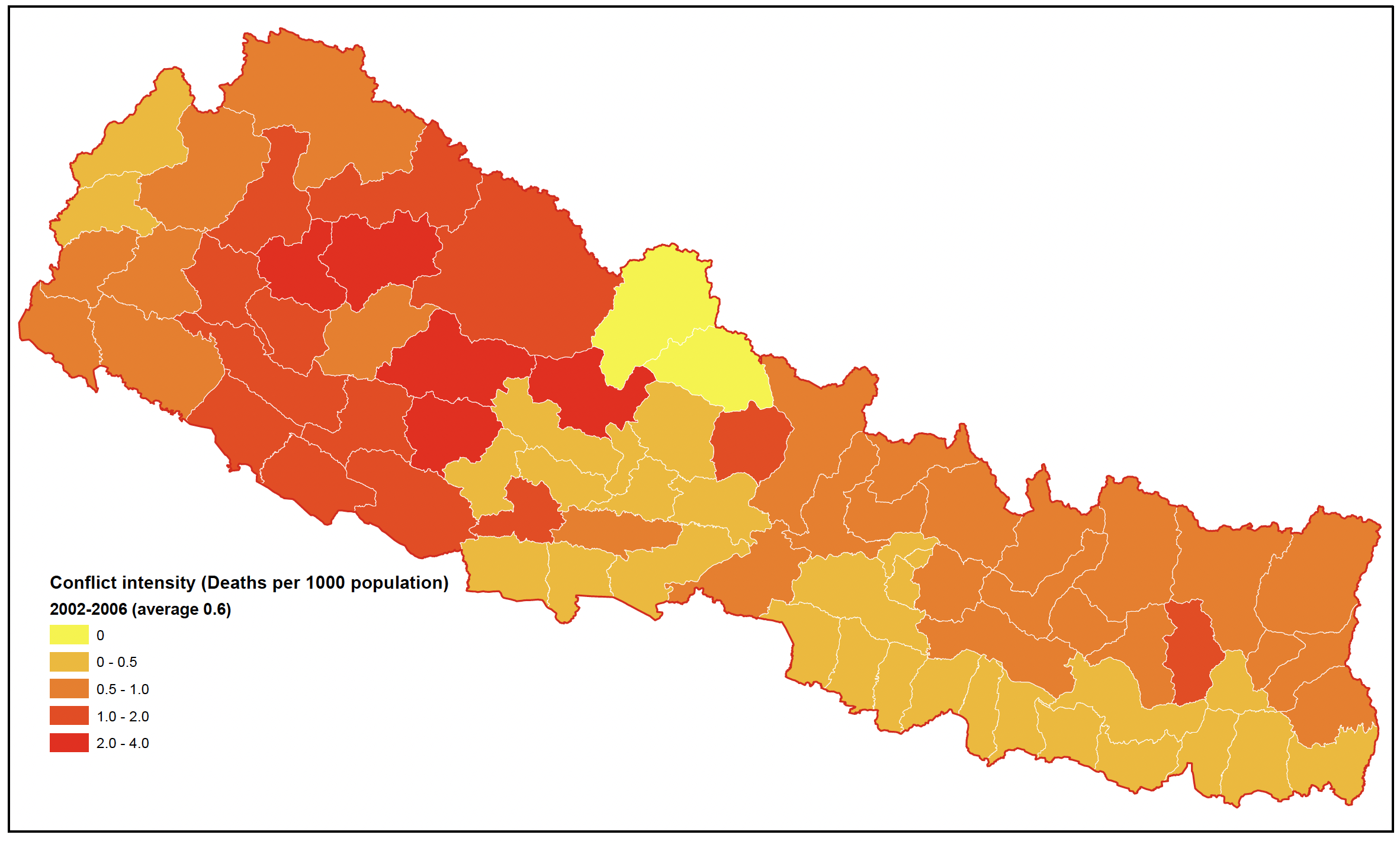 Note: The maps show the conflict intensity at the district level during 1996-2001 (top) and 2002-2006 (bottom). Conflict intensity is measured as the number of conflict related deaths in the period per 1000 population.

I find that increased conflict intensity, measured by cumulative rates of conflict-related deaths in the districts between the periods, pushes people abroad but the effects are again heterogenous. In rural areas, conflict has small and statistically insignificant impacts whereas in urban areas — where most rich people live — the migration response is large and statistically significant. The estimate suggests that the increase in conflict from its pre-2001 level to post-2001 level in urban areas increased international migration by 40% or about a third of the observed increase in migration between 2001 and 2008. About two-thirds of the increased migration was to India, the closest and lowest-cost destination.

It is important to note that conflict increases migration while lowering incomes. This indicates that the conflict-induced migrants were not liquidity constrained and would have desired not to migrate in the absence of the conflict. The large response from urban areas where households tend to be wealthier is consistent with conflict being a large ‘push’ factor that makes people’s home locations undesirable.

Lastly, I look at how increases in demand for migrant labour affects migration. The construction sector is the single largest employer for low-skilled migrants, particularly in the Persian Gulf countries and upper middle-income countries like Malaysia. I investigate the migration response to the recent growth in the construction sector in the most common destinations for Nepali migrants. The variation in the data comes from the differences in growth rates across the destination countries as well as over time.

I find that migration responds to increases in demand and the effects are particularly strong when the sets of destinations are limited to those that employ a lot of migrant workers. An example of this is the construction sector where the growth rates capture increases in labour demand more accurately. Among these destinations, annual growth rate that is five percentage points higher in the construction sector increases migration to that country by 14%.

Together, these findings provide a deeper understanding of migration decisions and offer a few lessons for policies. First, poverty inhibits migration, which higher incomes can relieve. However, liquidity constraints are large and pertinent for high return destinations, which means that the poor will not be able to capitalise on the migration opportunities to improve their welfare. There is a significant role for policy to make migration more affordable to the poor who can benefit the most from such opportunities.

Second, conflict can push people to migrate, but only the wealthier ones who are disproportionately affected and not liquidity constrained. Moreover, the migration response is likely to be highest in low-cost, presumably neighbouring, destinations and not necessarily to high return destinations. Migration may not be a viable adaptation mechanism for the poorest even in response to life-threatening conflict.

Third, migration responds to increases in labour demand from abroad. Those who can afford it will take advantage of such opportunities when they arise. While the economics drive the supply and demand, policy can facilitate mobility to match demand as well as target such opportunities towards populations that can benefit the most. 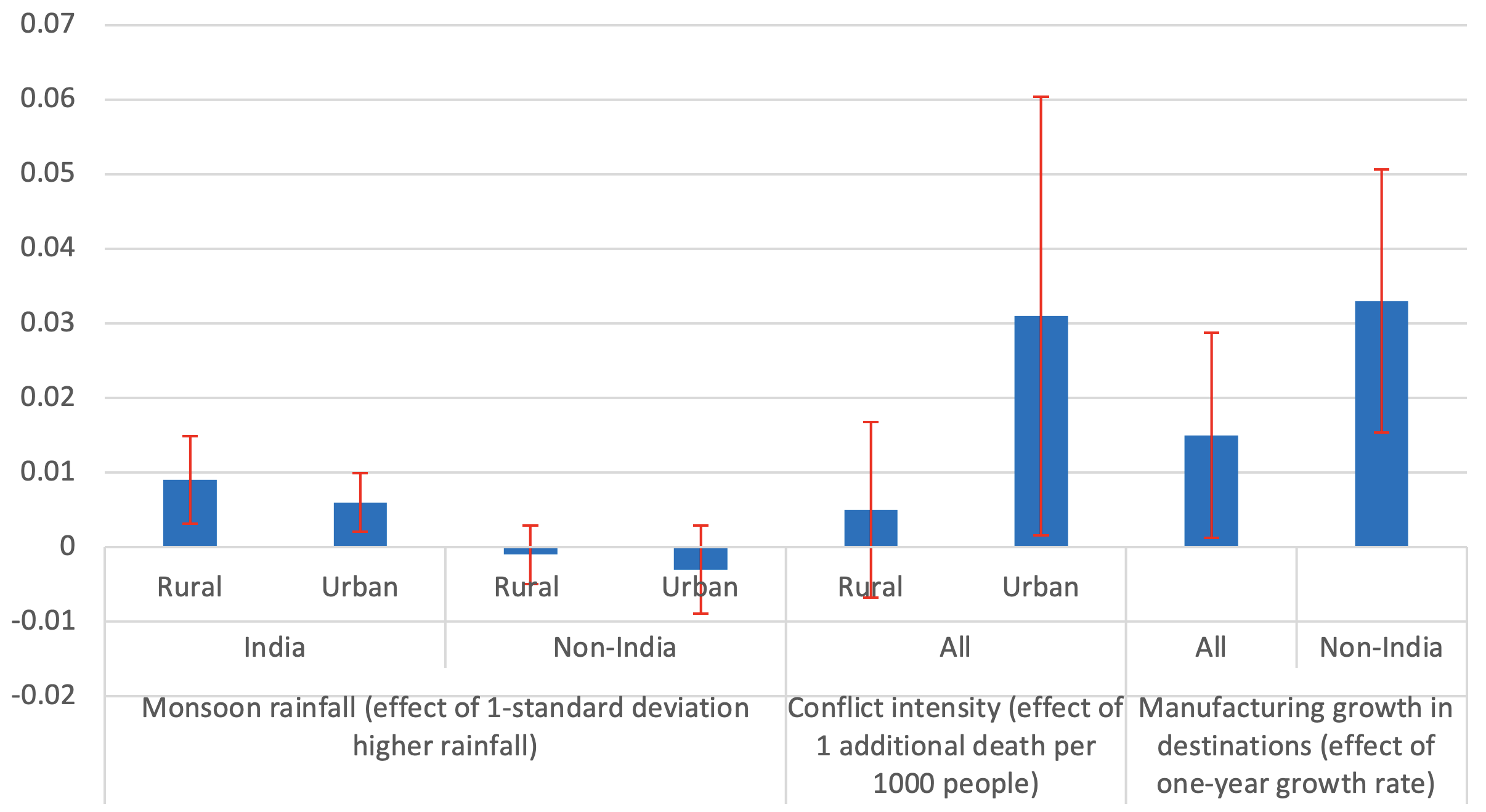 Note: This figure shows the effect of various push and pull shocks on migration rates. Effects are taken from Tables 5, 8, and 9 of Shrestha (2017).

Gibson, J, D McKenzie, and S Stillman (2011), “The Impacts of International Migration on Remaining Household Members: Omnibus Results from a Migration Lottery Program”, The Review of Economics and Statistics 93(4): 1297–1318.