The socioeconomic effects of export slowdowns: Evidence from China 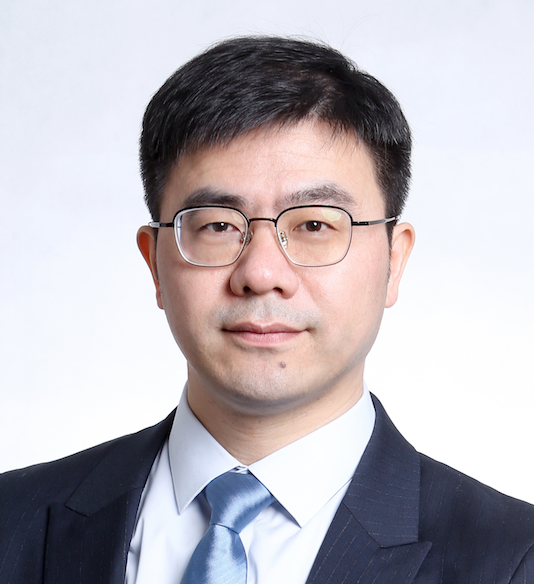 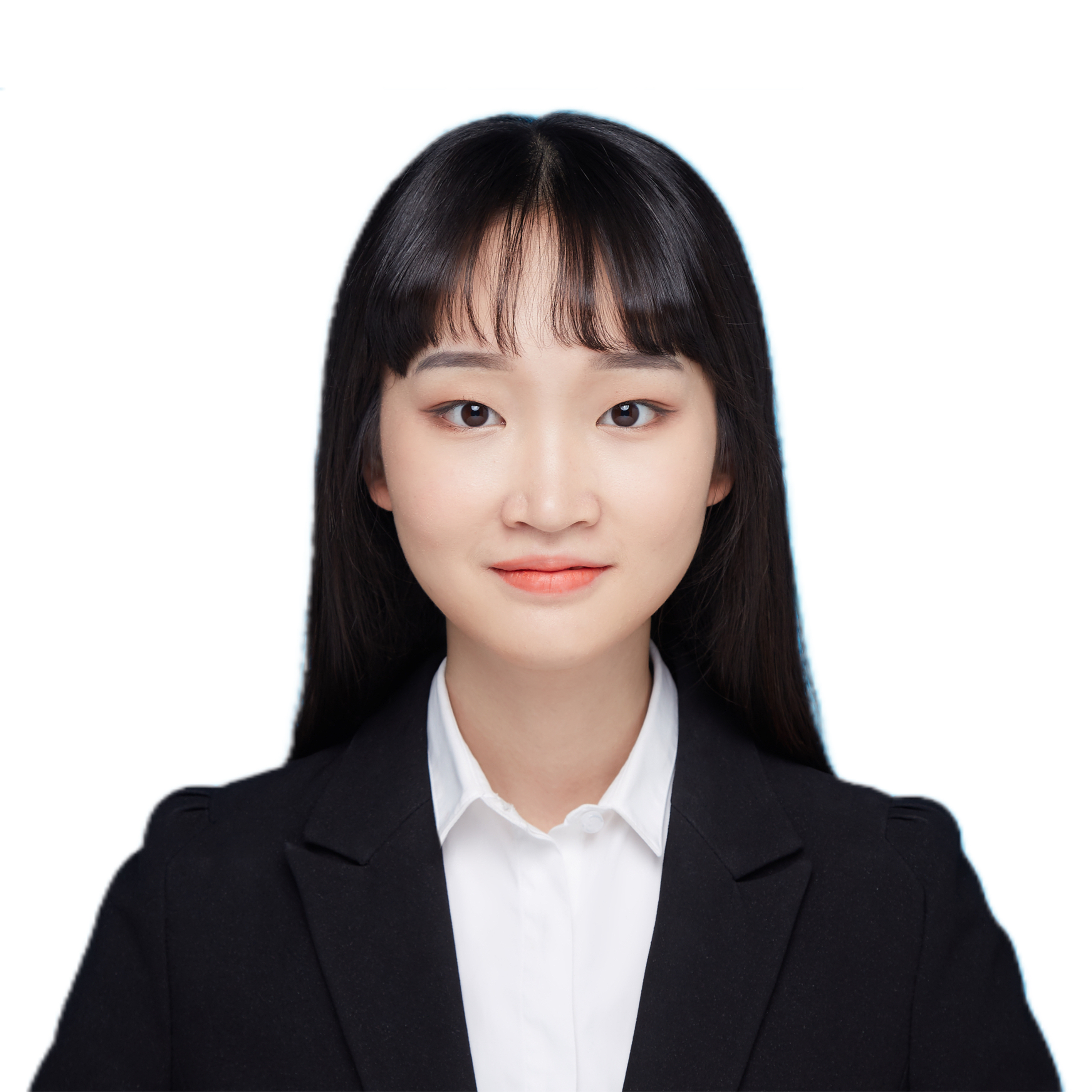 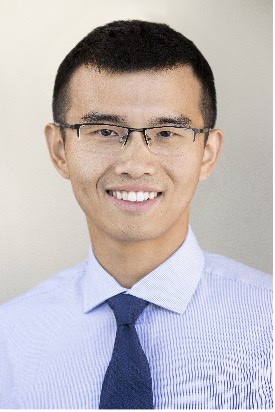 In the past decade, the annual growth of China’s exports has dropped sharply from an average of 25% during 2001–2008 to less than 5% during 2011–2018. The slump in exports is largely due to sluggish foreign demand (World Bank 2020). Indeed, since the Global Financial Crisis of 2008, the world economy has remained highly prone to secular stagnation (Summers 2014, 2015). Home to the largest working-age population in the world, China relies heavily on global demand to sustain growth and generate jobs (Feenstra and Hong 2010). This has raised strong concerns that not enough jobs are being created, which may have substantial socioeconomic costs such as increased criminal activity (Bignon et al. 2017, Khanna et al. 2021, Bhalotra et al. 2021). 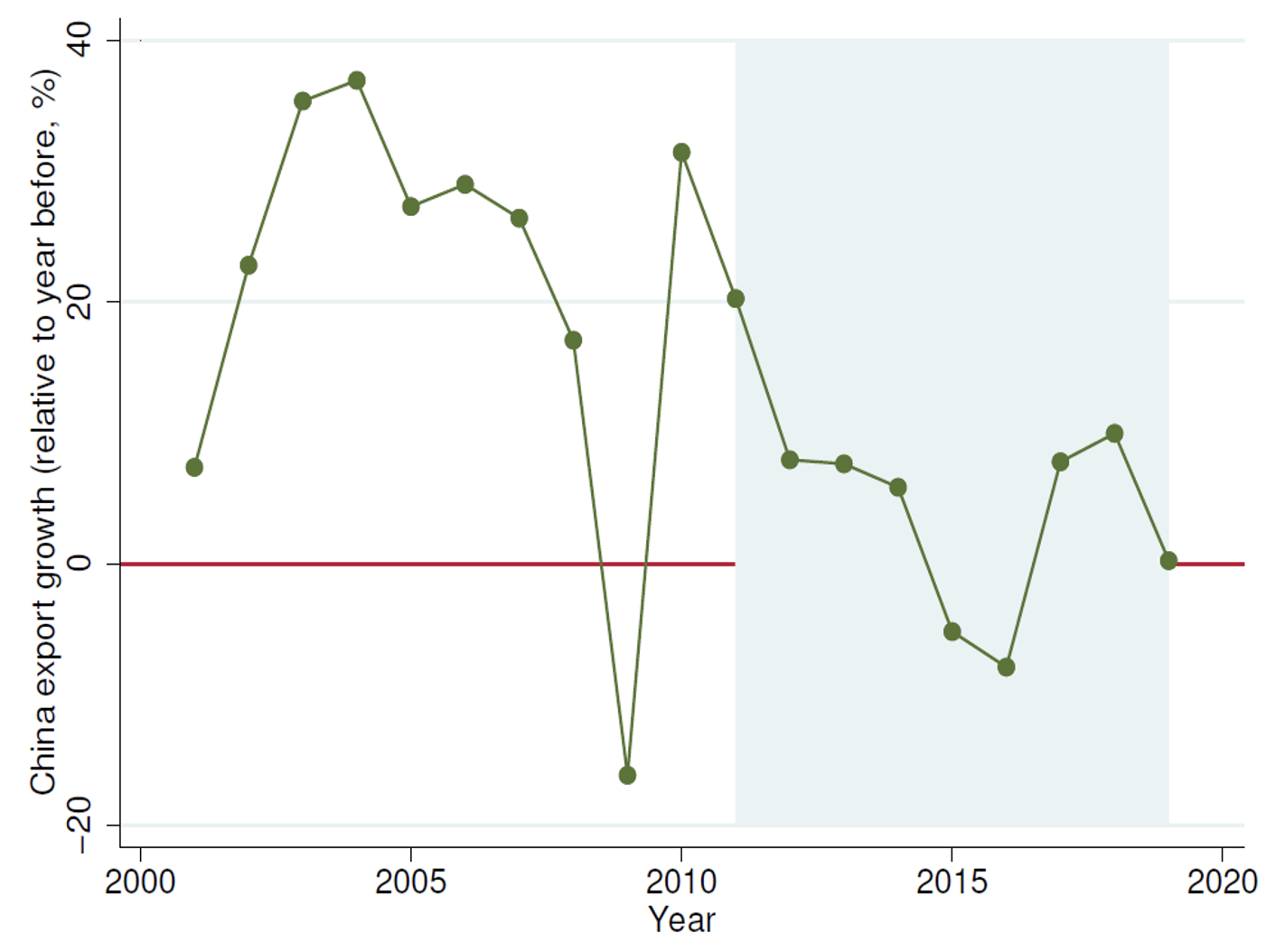 The slump in exports may have impacted the local economy by forcing firms out of business and deteriorating labour market conditions, which potentially added to social unrest, protests, and criminal activities. Although the socioeconomic consequences of an export slowdown seem evident, the impact has rarely been quantified in the Chinese context. In our paper (Ma, Pan and Xu 2022), we assemble a unique and comprehensive dataset that links city-level measures of crime rates (by detailed criminal activities) with measures of exposure to adverse export shocks in the global market. Our crime rates are constructed based on verdicts posted on China Judgments Online (CJO), the first comprehensive official database of judicial judgment documents in China that covers almost all types of judgment documents from 2011 to 2018.1 In the analysis, we focus on criminal cases that violate the ‘Criminal Law of the People’s Republic of China’ because criminal activities induce high social costs (Loayza et al. 2000). To assign each case to a type of crime, we perform a textual analysis of the transcripts of the verdicts.

Figure 2 shows the similarity of our CJO crime rates aggregated at the national level with two official statistics published by the Supreme People’s Court of China (SPC). The upper panel (Figure 2a) compares our constructed crime rates with the number of criminal cases concluded at first instance; the bottom panel (Figure 2b) compares these crime rates with the number of sentenced criminals. In both panels, our constructed measure exhibits a similar trajectory with the official data. The key advantage of using the CJO judgment documents is that this approach allows us to measure crime rates for each Chinese city by specific categories of criminal activity. The vast difference in crime rates across various cities is then compared with the exposure of the aforementioned cities to negative export demand shocks.

Figure 2 Crime rate comparison, CJO and the SPC of China 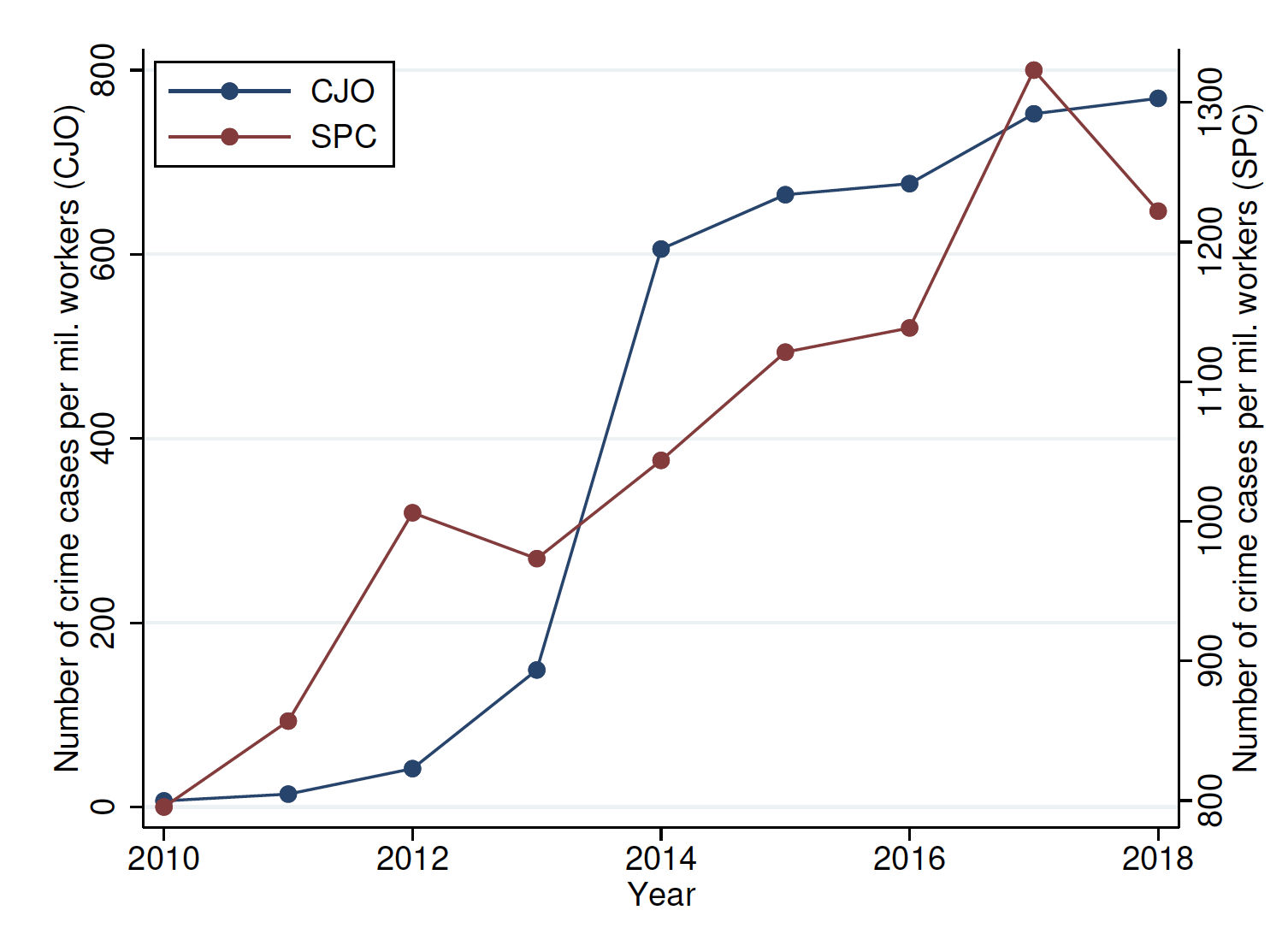 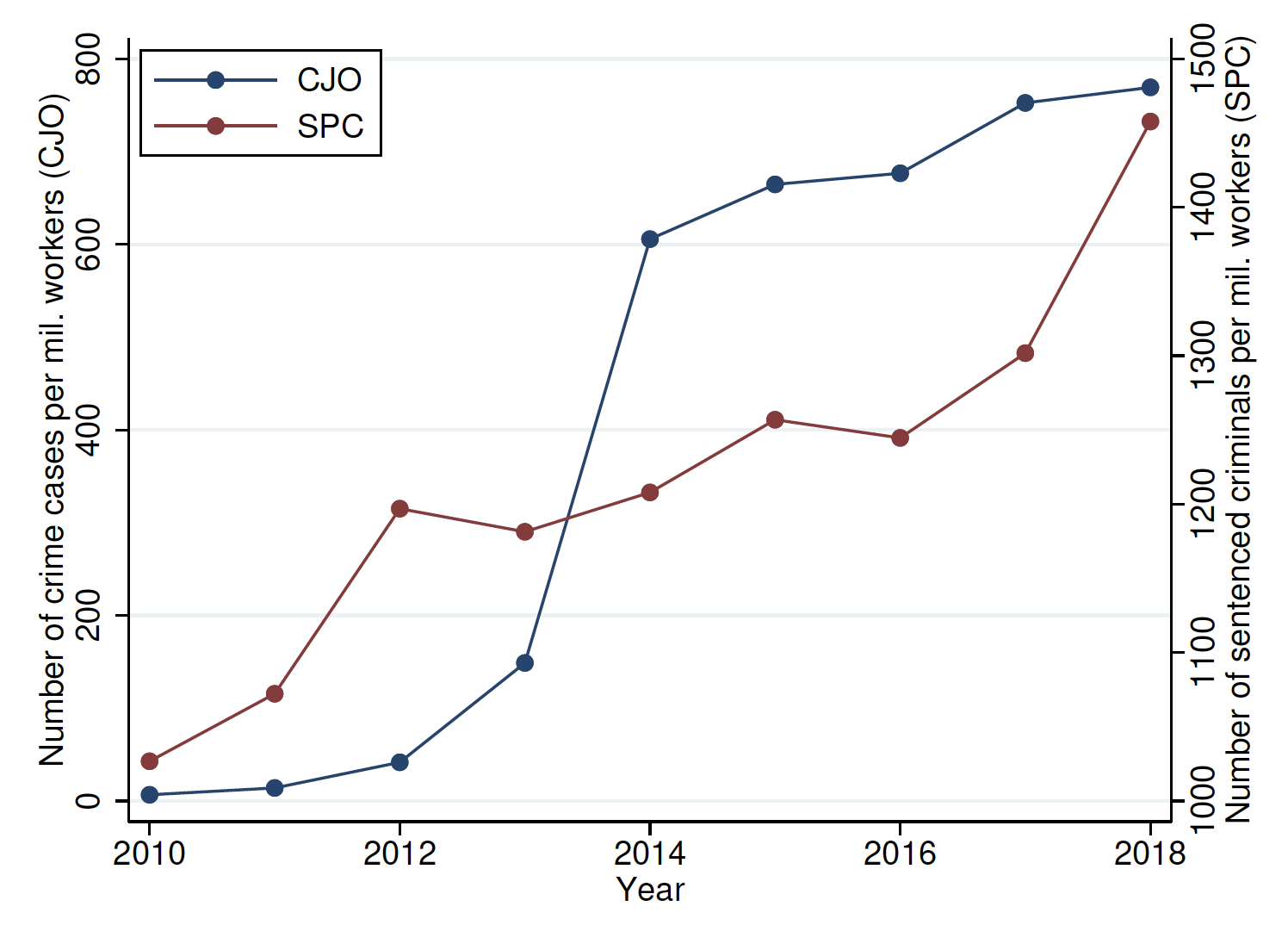 Using a shift-share instrumental variable approach for our estimation, we find robust evidence that China’s export slowdown led to increased crime rates. In particular, cities that experienced a deeper slowdown in export growth have seen a greater incidence of criminal activity relative to their working-age population. This effect is more pronounced in regions that specialise in manufacturing or have a larger share of young and migrant residents. Regarding types of crime, larger effects are found in resource appropriation activities, such as robbery, theft, fraud, counterfeiting and intellectual property infringement, as well as in criminal activities involving violence, felony traffic offenses, drugs, prostitution, and gambling.

As for the mechanism, we demonstrate that sluggish export growth leads to shrinking job opportunities and lower wages in the manufacturing sector, which drives the increase in crime rates. Consistent with these findings, we identify heterogeneous impact of the export slowdown on crime rates across regions. We find the export slowdown has an insignificant effect in regions with large (non-tradable) service sectors, where employment and earnings respond less elastically to export shocks. The worsening labour market is also reflected by a rising number of labour disputes, and a falling net inflow of migrant workers in regions with more severe contraction in exports. As an alternative channel, export contraction may induce crime by reducing governments’ expenditure on public security or surveillance equipment. However, our estimations lend less support to this possible mechanism: we do not find evidence that that the export slowdown had significantly decreased fiscal spending on public security (e.g., the expenses by the Armed Police, the judicial system, and the public security organs), and social services (e.g., the expenditure on public education, social security, public hospitals, urban and rural affairs, and public housing).

Two contributions of our paper are noteworthy. First, we construct a time-varying measure of the crime rate at the city level, which is used for investigating the socio-economic effects of the export slowdown. For this purpose, we innovatively apply textual analysis to millions of judgment documents at all levels of courts in China. Most related studies have mainly used the province-level crime statistics from the China Procuratorial Yearbooks, and focused on the aggregated rather than specific types of crime. We take advantage of the universe of judgment documents make public by the Supreme Court of China and generate rich information on city-level crime rate that varies by time and by crime types. Second, our focus on the rising crime rate in Chinese cities has rarely been explored in previous work. We find that an export slowdown. induces more crime, primarily through its effects on the labour market conditions, thus corroborating the Brazilian experience documented by Dix-Carneiro et al. (2018).

Our paper is among the first to examine the rising social conflicts caused by export slowdowns after the Global Financial Crisis. In this regard, one closely related study is that by Campante et al. (2019), who examine rising labour strikes in Chinese prefectures as a result of the export slowdown. Taken together, in the context of China, our work highlights the crucial role of improving labour market conditions in reducing crime, a solution with which society can maintain low crime rates and ever-greater well-being. A back-of-envelope calculation based on our estimation shows that on average each one percentage point increase in export growth would reduce incidence of crime by 2 cases per million residents, or about 0.43% of the national average crime rate between 2011 and 2018.

World Bank (2020), “Trading for Development in the Age of Global Value Chains”.

1 Cases involving national security, juvenile delinquency, divorce litigation, resolution through mediation, and any other types that the people’s court considers inappropriate for release are not posted in CJO.