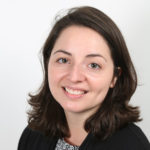 In an experiment conducted with the Ministry of Health, workers recruited via career incentive ads proved more effective at delivering health services

What is the best strategy for attracting the strongest candidates into government jobs? This widespread challenge is particularly relevant in developing countries, where low skills and motivation among public sector workers often translates into poor-quality essential public services like health and education.

Incentive packages are commonly used in the private sector as a way to attract the ‘right’ employees for the job and motivate good performance. There is increasing interest in using incentives to support better outcomes in the public sector. Typically, these incentives can work through two potential channels: first, encouraging better performance on-the-job (‘motivation effects’); and second, attracting better people from the start (‘selection effects’).

‘Performance-based’ incentives can be particularly tough to design for public sector jobs, where success often involves difficult-to-observe outcomes like improving the quality of education or healthcare (in contrast to simpler metrics like boosted sales or financial returns). Teachers rewarded based on test scores might ‘teach to the test’, for instance, which may not be the best way to improve student learning.

Recent research supported by the International Growth Centre focuses instead on the ‘selection’ strategy of using career incentives to recruit stronger candidates in the first place. While in theory there may be concerns that using such incentives for public sector recruitment could attract applicants without pro-social motivations, the research shows that it also attracts applicants with strong skills and strong pro-sociality. As these are those who are chosen by expert panels, offering career incentives is an effective route toward achieving the ultimate goal of improving motivation and performance.

Along with Zambia’s Ministry of Health, we implemented one of the first ever randomised experiments to test the effects of different incentives on the quality and performance of public sector job candidates (Ashraf et al. 2016). The experiment was built into the Zambian government’s drive to recruit a new cadre of over 300 community health workers in rural areas that were facing severe staff shortages. The research tested whether offering incentives – in this case, promotion prospects to better paid positions within the Ministry of Health – would help attract more talented individuals without attracting the ‘wrong types’ (i.e. those less committed to serving their communities).

Districts in the experiment were assigned to either a treatment group or a control group. Advertisements posted in communities to recruit candidates emphasized key messages that varied across the groups. In the treatment group, recruitment ads emphasised the career incentives of the job (Figure 1), suggesting it could be a stepping-stone to higher level positions such as a nurse or doctor, with the caption, “Become a community health worker to gain skills and boost your career!” In the control group, recruitment materials described the position more generically as an opportunity to help the community (Figure 2). 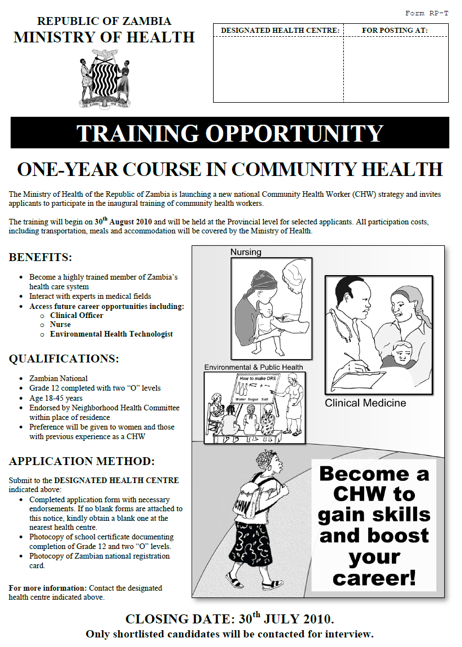 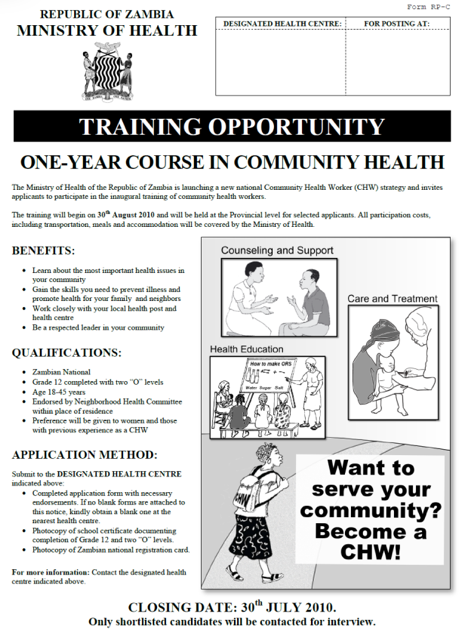 Career incentives attract applicants with strong skills and strong pro-social motivations. The recruitment strategy emphasising career incentives attracted different types of candidates than the control group – for instance, these candidates had better test scores on national high school exams and they expressed stronger career ambitions. At the same time, these workers did not behave any less pro-socially than the control group.  A weaker group of applicants had both low skills and low pro-social motivations but these were not hired. Thus, the paper is the first to show evidence that once we take into account selection on skills and choose only higher skill applicants, incentives will not crowd out pro-sociality.

By attracting more qualified and motivated staff, career incentives also translate into better public services. Workers recruited via career incentive ads proved to be more effective at delivering health services – they conducted 29% more household visits and twice as many community mobilisation meetings (two core job functions) over the 18-month period of the study. Most impressively, this translated into real differences in health outcomes, including a 25% reduction in the share of underweight children in treatment relative to control areas. There were also improvements in health behaviours, including giving birth at health facilities, breastfeeding, immunisations, and deworming. It’s particularly surprising that these results were achieved simply by varying the recruitment messages without actually offering different pay or reward schemes to the treatment and control groups.

Job performance cannot be predicted purely by measurable traits, like education; ‘hidden’ traits such as individual motivation may play a significant role. Interestingly, measurable characteristics like education and age accounted for no more than 40% of the performance gap between the groups of health workers in the experiment. Instead, career incentives worked mainly by attracting workers with other ‘hidden’ characteristics like motivation that contributed to better job performance.  Developing country governments looking to upgrade their workforces often take the approach of trying to identify a detailed list of required qualifications they believe are likely to predict good performance. Since this can be difficult to know in advance, however, the IGC findings suggest it may be wise to focus more on strategies that allow a greater role for self-selection and encourage the most motivated candidates to apply.

Much existing literature and policy advice focuses on using ‘performance-based’ pay schemes to incentivise workers to perform better. The new experimental findings highlight the importance of incentive design to attract more competent and motivated people into public sector jobs in the first place. A key message for policymakers is that a greater focus on using incentives to draw in the ‘right’ people at the recruitment stage, rather than just trying to get existing staff to perform better, may be effective to get more ‘performance bang’ for each salary buck.  The Zambian government has begun exploring career incentives as part of a broader strategy for improving productivity among those recruited into the civil service.

It may be more cost-effective and politically feasible for governments to experiment with new, creative recruitment strategies and messages alongside longer-term processes of reforming civil service pay structures. Building openness and transparency in public sector recruitment processes, and exploring ways to leverage social incentives alongside monetary incentives, may be promising avenues for further policy experiments.

Editor’s Note: This column first appeared on the IGC’s blog.

Photo credit: Bread for the World.