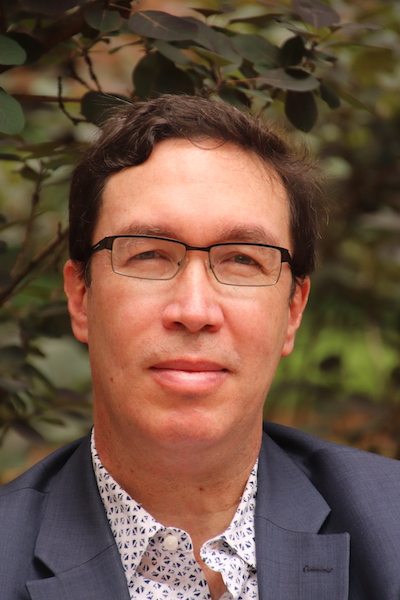 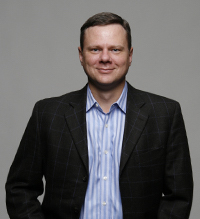 Associate Professor, Department of Economics, University of Texas at Austin

The increase in school enrolment around the world is one of the most impressive results of any social policy in recent history. This success story is largely the product of governments in low- and middle-income countries implementing effective policies during the last decades (Pritchett 2013, J-PAL 2017). Among these policies, conditional cash transfer (CCT) programmes have been playing an important role in this success. A CCT is a contract between society and households in which the government provides cash to (usually low-income) households in exchange for the household making human capital investments; in turn, society as a whole benefits from these investments thanks to positive externalities derived from health and education. Additionally, CCTs can be seen as redistribution programmes that the median voter finds more palatable than ‘free handouts’ due to the conditions set on beneficiaries. The fundamental idea is to induce human capital investments by providing income to the families and by reducing the opportunity cost of sending children to schools. These programmes are quite prevalent all across Latin America, and are spreading to Africa, Asia, and Europe.

The available evidence of the effects of CCTs is extensive. One of the first programmes, conducted in Mexico, was implemented using randomised assignment that allowed for a rigorous evaluation. This programme, initially called Progresa, was renamed by successive governments (as Oportunidades, and now Prospera) but with only marginal modifications, which speaks highly to the benefits of rigorously evaluating a successful program. Several other countries have since implemented and evaluated similar programmes. In terms of education, the mounting evidence is clear – the short- and medium-run effects on enrolment and school attendance in different contexts are overwhelmingly positive (for a general overview, see Fiszbein and Schady 2009, and Garcia and Saavedra 2017). Less clear are the effects on long-term outcomes, particularly student achievement. Indeed, the positive story of enrolment around the world has one component of concern – children and adolescents are increasingly attending school, but the results in achievement (as measured by standardised tests) are lacking (Pritchett 2013). In addition, there is need for more evidence on design issues that can potentially make these programmes more cost-effective (J-PAL 2017). CCTs are often quite costly, since they need to cover households that, even in the absence of the programme, would not invest in the accumulation of human capital that the programme requires.

In a recent paper, we explore the long-term effects of one change in the design of CCTs – a delayed timing in the disbursement of money, forcing families to save a portion of the transfer (Barrera-Osorio et al. 2017). The results are striking – a simple change in the timing of disbursement lead to long-term effects in tertiary education enrolment. In order to understand the result, it is important to know the original experiment that allowed for long-term evaluation.

A group of researchers from Fedesarrollo (an influential think tank in Colombia) and the Jameel Poverty Action Lab (J-PAL) worked with the government of Bogota to implement a CCT pilot programme of 10,000 students in 2005. The main problem that the programme aimed to address was the high rate of dropout in secondary education (grades 6 to 11). The programme targeted the population by grade (only students in secondary education) and by poverty (using a means-tested index, SISBEN). The programme randomly varied the timing of disbursement, the conditionality, and the amount of the cash transfer to students.

The pilot included three different transfer schemes: one transfer awarded a student about US$15 per month (‘basic treatment’); another awarded $10 dollars and saved $5 per academic month (for a total of $50 per school year) to be disbursed at the beginning of the following school year (‘savings treatment’); and finally, one scheme awarded $10 dollars per month and paid a larger amount ($300) conditional on enrolling in tertiary education, right after graduation from high school (‘tertiary treatment’).

Barrera-Osorio et al. (2011) show that this revenue-neutral change in the timing of the cash disbursement triggered important changes in students’ short-run secondary school enrolment and attendance. Theoretically, the delay in payment in the savings treatment could have reduced incentives for attendance. This could have happened, for example, if families had an immediate need for the funds and the alternative was to send the student to work rather than school. However, this did not happen – like the savings treatment, the basic treatment increased students’ attendance by about three percentage points. Further, the delayed transfer made reenrolment much more likely. The tertiary treatment improved reenrolment by four percentage points – three more than the savings treatment.

In our recent evaluation, we merge the original experimental sample with administrative data (Barrera-Osorio et al. 2017). This is one example of a very inexpensive evaluation that derives from merging an original experiment with already available administrative data. In this case, since we did not have a unique identification number, we merged the data with last names (Hispanic countries usually have two last names) and date of birth.

The administrative data in Colombia is quite rich. It allows following individuals at different stages of their lives. For this project, as outcomes we used enrolment and progression into secondary education, graduation from secondary education, and enrolment in tertiary education. The data allow us to investigate the effects of the program 11 years after the original treatment. Figure 1 presents the main effects on these outcomes when we estimate the effects by pooling the data and restricting the effects for grades 9-11 (similar results emerge when estimating the arms of the experiment individually and when including the other grades). The savings and tertiary treatments cause greater rates of on-time high school enrolment. All three treatments increase high school graduation, but the effects are only statistically significant for the basic and savings treatment. Finally, only the savings and tertiary treatment have positive effects on tertiary enrolment. 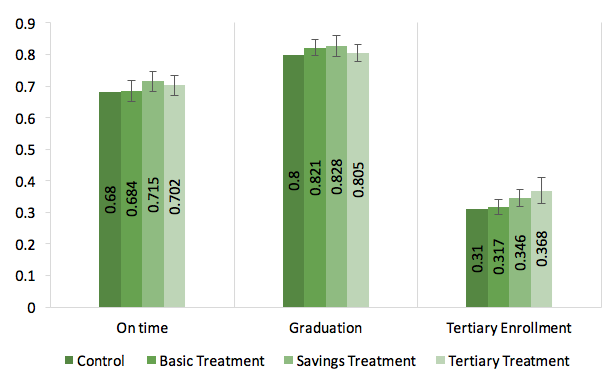 The pattern of effects confirms that forcing families to save one-third of the transfer until just before the beginning of the next academic year (the savings treatment) increases long-term human capital accumulation with no additional incentives. This is particularly significant since the traditional CCT payment structure (the basic treatment) does not increase tertiary education enrolment. Thus, a simple, costless modification to the timing of CCT payments can have sizeable long-term economic returns. Remarkably, this long-term effect was achieved even without a direct incentive for tertiary enrolment. This is intriguing given the recent body of research showing the viability of unconditional transfers (Baird et al. 2014, Benhassine et al. 2015). However, future research will have to determine whether the long-term gains observed in our study belie the need for incentives or result indirectly from the incentives provided earlier.

The second key result is that the delayed transfer that directly incentivises on-time tertiary education (the tertiary treatment) does no better than the ‘savings’ treatment. Moreover, whereas the savings treatment increases tertiary enrolment in four-year universities, the tertiary treatment only increases tertiary enrolment in low-quality colleges, providing a cautionary tale for the use of high-powered incentives in education. This finding is consistent with some evidence that suggests that student incentives often have no impact on achievement (e.g. Fryer 2011) and may even generate negative unintended consequences (e.g. Lepper et al. 1973).

CCT programmes can be very expensive since they need to cover a large proportion of the (intended) population. Because of this, design issues are critical. Changes in their designs can increase cost-effectiveness (Garcia and Saavedra 2017).

After the first year of implementation of the programme (2005), the government expanded the pilot to the rest of Bogota. The short-run evaluation was a critical input for the expansion. Moreover, the team that implemented the evaluation within the Secretary of Education gained important knowledge on potential implementation problems and administrative hurdles that were extremely beneficial in the subsequent scale-up of the programme. Within one year, the city was able to reach more than 100,000 students through the programme. Moreover, at the national level, the country is discussing a change in its national CCT programme (Familias en Accion) using a variation of the savings treatment. Admittedly, the discussion has proven difficult. Nevertheless, ours is a clear example of an experiment that is having a direct impact on policy.

Baird, S, F H Ferreira, B Özler and M Woolcock (2014), “Conditional, unconditional and everything in between: A systematic review of the effects of cash transfer programmes on schooling outcomes”, Journal of Development Effectiveness 6(1): 1-43.