Why are older women missing in India? The age profile of bargaining power and poverty 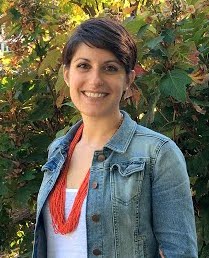 There are far more men than women in India relative to developed countries. Following seminal work by Amartya Sen (1990, 1992), this fact has been dubbed the missing women phenomenon. Sex-selective abortion and excess female mortality at early ages have been identified as important determinants of missing women and biased sex ratios. Parental preferences for male children carry the blame (Das Gupta 2005). It has recently been argued, however, that in India excess female mortality persists beyond childhood and that close to half of missing women are of post-reproductive age (Anderson-Ray 2010). Unlike the missing girls phenomenon, excess female mortality at older ages has not received much attention and remains a puzzle.

In a recent paper (Calvi 2017), I identify one mechanism – the decline in women's bargaining power at post-reproductive ages – that can account for a considerable fraction of missing women in the 45-79 age group. The decrease in women's bargaining power is reflected in their diminished ability to access household resources. As a result, poverty rates at older ages are significantly higher among women than men. In other words, when compared to women in developed countries, older Indian women die at a disproportionately higher rate than men exactly at those ages when they are disproportionately poorer than men.

Intra-household bargaining power and its changes are difficult to measure and often unobservable. To overcome this limitation, I proceed in two steps.

One question remains: Why do intra-household bargaining and resource allocation matter for women’s health and mortality risk? Because they affect their likelihood of being poor.2

I use the model estimates of how resources are allocated within households to compute poverty rates (the fraction of individuals living below the poverty line) that are adjusted for unequal sharing of household resources. These are different from standard poverty measures, which by construction ignore intra-household inequality. My poverty analysis (based on World Bank poverty lines) unveils some interesting features. 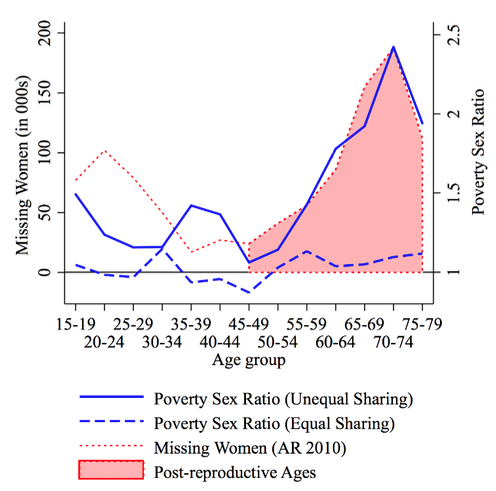 Note: The graph shows the fraction of female poverty rate to male poverty rate in each age group together with the missing women estimates by age from Anderson-Ray (2010). The underlying gender-age-specific poverty rates are calculated using the US$1.90/day poverty line.

When the unequal allocation of resources within the household is taken into account and the model predictions are used for calculations, the age profile of excess female poverty matches the age distribution of missing women quite well. This match is nearly exact at post-reproductive ages, when the correlation coefficient between excess female mortality and excess female poverty equals 0.96. A simple back-of-the-envelope calculation suggests that up to 73% of missing women at post-reproductive ages can be attributed to the decrease in women's bargaining power over the lifecycle, and to the consequent increase in female poverty at older ages relative to that of males.

As other forces may obviously be playing a role, these magnitudes must be interpreted with caution. Nonetheless, I argue that a potentially sizable reduction in excess female mortality at older ages can be achieved by alleviating the problem of gender asymmetries within the family and the consequent asymmetries in poverty.

In my paper, I also confirm that exposure to the Hindu Succession Act amendments significantly improves women’s bargaining power inside the family and their ability to access household resources (Roy 2015, Heath-Tan 2016). These reforms were enacted in different states at different times and only applied to Hindu, Buddhist, Sikh, and Jain women who were not married at the time of implementation. A large fraction of Indian women, especially of older ages, is therefore excluded. With a counterfactual policy experiment, I demonstrate that granting universal equal inheritance rights can significantly reduce the number of women living in extreme poverty (by 8%) and the number of excess female deaths at post-reproductive ages (by 19%).

Taken together, these results have some important policy implications:

Calvi, R (2017), “Why are older women missing in India? The age profile of bargaining power and poverty”, Working Paper.

[2] The World Health Organization lists poverty as one of the major determinants of health and mortality. For instance, Indian women who live in extreme poverty are estimated to face a 2.7 times higher probability of death than those who do not (WHO 1999, 2015).