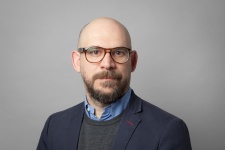 Giacomo De Giorgi was born in Lecce (Italy) where he spent his first eighteen years. Then he moved to Milan where he met Paola and he got his laurea at the Universita' "L. Bocconi". He worked as a Researcher at the Fondazione Rodolfo Debenedetti (FRDB) in Milan, with Prof. Tito Boeri. He holds an MSc in Economics from the University of Warwick, final dissertation in applied microeconometrics, Adviser: Mark Stewart. His PhD is in development, labour economics, applied microeconometrics, Main Adviser Richard Blundell, at the Department of Economics of the University College London.

In July 2006 he joined the Department of Economics at Stanford University. From August 2010 to July 2011 he was on leave at UC-Berkeley. From August 2012 to June 2013 he was on leave at Columbia University as the Wesley Mitchell Visiting Professor and a regular visitor of the NY-Fed. September 2014 to September 2016 he was a Senior Economist at the NY-Fed. Since June 2013 he was a Research Professor of ICREA-MOVE, and currently a Research Professor of the Barcelona GSE, MOVE and UAB. In January of 2015 he was appointed Associate Editor of the Journal of the European Economic Association.