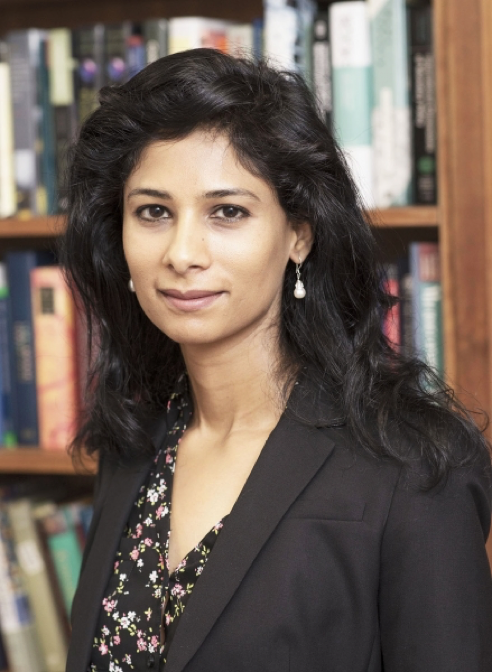 Gita Gopinath is the Economic Counsellor and Director of the Research Department at the International Monetary Fund (IMF). She is on leave of public service from Harvard University’s Economics department where she is the John Zwaanstra Professor of International Studies and of Economics.

Ms. Gopinath’s research, which focuses on International Finance and Macroeconomics, has been published in many top economics journals. She has authored numerous research articles on exchange rates, trade and investment, international financial crises, monetary policy, debt, and emerging market crises.

She is the co-editor of the current Handbook of International Economics and was earlier the co-editor of the American Economic Review and managing editor of the Review of Economic Studies. She had also previously served as the co-director of the International Finance and Macroeconomics program at the National Bureau of Economic Research (NBER), a visiting scholar at the Federal Reserve Bank of Boston, and member of the economic advisory panel of the Federal Reserve Bank of New York. From 2016-18, she was the Economic Adviser to the Chief Minister of Kerala state in India. She also served as a member of the Eminent Persons Advisory Group on G-20 Matters for India's Ministry of Finance.

Ms. Gopinath is an elected fellow of the American Academy of Arts and Sciences and of the Econometric Society, and recipient of the Distinguished Alumnus Award from the University of Washington. In 2019, Foreign Policy named her one of the Top Global Thinkers, in 2014, she was named one of the top 25 economists under 45 by the IMF and in 2011 she was chosen a Young Global Leader (YGL) by the World Economic Forum. The Indian government awarded her the Pravasi Bharatiya Samman, the highest honour conferred on overseas Indians. Before joining the faculty of Harvard University in 2005, she was an assistant professor of economics at the University of Chicago’s Booth School of Business.

Ms. Gopinath was born in India. She is a U.S. citizen and an Overseas Citizen of India. She received her Ph.D. in economics from Princeton University in 2001 after earning a B.A. from Lady Shri Ram College and M.A. degrees from Delhi School of Economics and University of Washington.