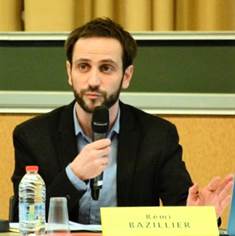 Rémi Bazillier is a Professor of Economics at the Pantheon-Sorbonne University and research affiliate at the Centre d’Economie de la Sorbonne (CES-CNRS). He is the director of the Master of Development Economics and professor in charge of international relations at the Sorbonne School of Economics. He is also member of the scientific council of the Foundation for European Progressive Studies. His research focuses on labour and development, corporate social responsibility, inequalities, and the linkages between social and economic development. He received his Ph.D. in Economics from the University of Paris I Panthéon-Sorbonne in 2007. He wrote several papers published in international per-reviewed journals including Journal of Comparative Economics, World Development, Journal of Economics Surveys, Review of World Economics, Journal of Development Studies, and International Labour Review.