Some farmers create more social value than others: Technology spillovers in Uganda 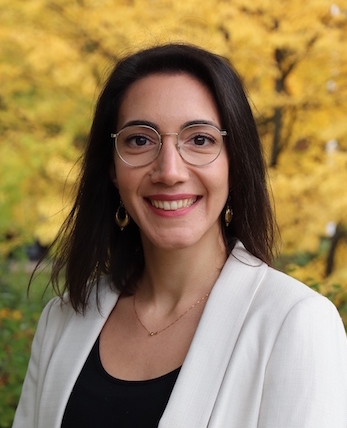 Farmers are willing to pay to induce other farmers to adopt new technologies, and can help identify who among them should adopt first

When a firm decides to use new technology, it makes an individual decision with consequences for others in society. Technology can affect others positively or negatively, generating benefits or costs for a society not reflected in market prices, called externalities (Pigou 1920). It is a government’s responsibility to decide on corrective policies, either to curb negative externalities or to foster positive ones, using tools like taxes or subsidies. Ideally, if the externalities are large, a government intervenes by choosing a policy that maximises social benefit. In reality, large social gains often go unrealised because externalities are not accounted for.

Quantifying externalities: Identifying the size of the problem

Expressing externalities as monetary amounts can help a government quantify the size of the problem. This is not straightforward, however, because externalities are not traded – they lack a price tag. Contingent valuations (Diamond and Hausman 1994) are a common way to measure the value of non-marketed goods like externalities: they elicit an individual’s hypothetical willingness to pay (WTP) for a good. Unfortunately, given their speculative nature, contingent valuations tend to yield biased answers from respondents (Hausman 2012).

In my paper (Lerva 2022), I show how we can measure externalities using truthful WTP elicitations. I use a variant of the Becker-deGroot-Marschak (BDM) mechanism1 (Becker et al. 1964, Berry et al. 2020, Burchardi et al. 2021) to elicit how much farmers are willing to pay to train one specific farmer in their village on pest-control techniques. This enables me to measure the monetary value of the externalities produced by a farmer adopting a new technology, from the standpoint of their peers (assuming that farmers are self-interested).

Methodology: Eliciting willingness-to-pay for self and other farmers in the village

I sampled about eight farmers per village in 103 villages in Eastern Uganda. They were offered the opportunity to purchase an in-depth, agronomist-led, one-on-one training on techniques to address a new maize pest known as the fall armyworm (Spodoptera frugiperda), either for themselves or for a specific farmer in their village.

I find farmers anticipate large externalities from others receiving the training – on average, they are willing to pay two days’ wages for another farmer in their village to be trained, about half of what they are willing to pay for themselves. Figure 1 shows the WTP distribution (top) and the implied demand curves for training (bottom, showing the price on the y-axis and the share of farmers willing to buy at that price on the x-axis). 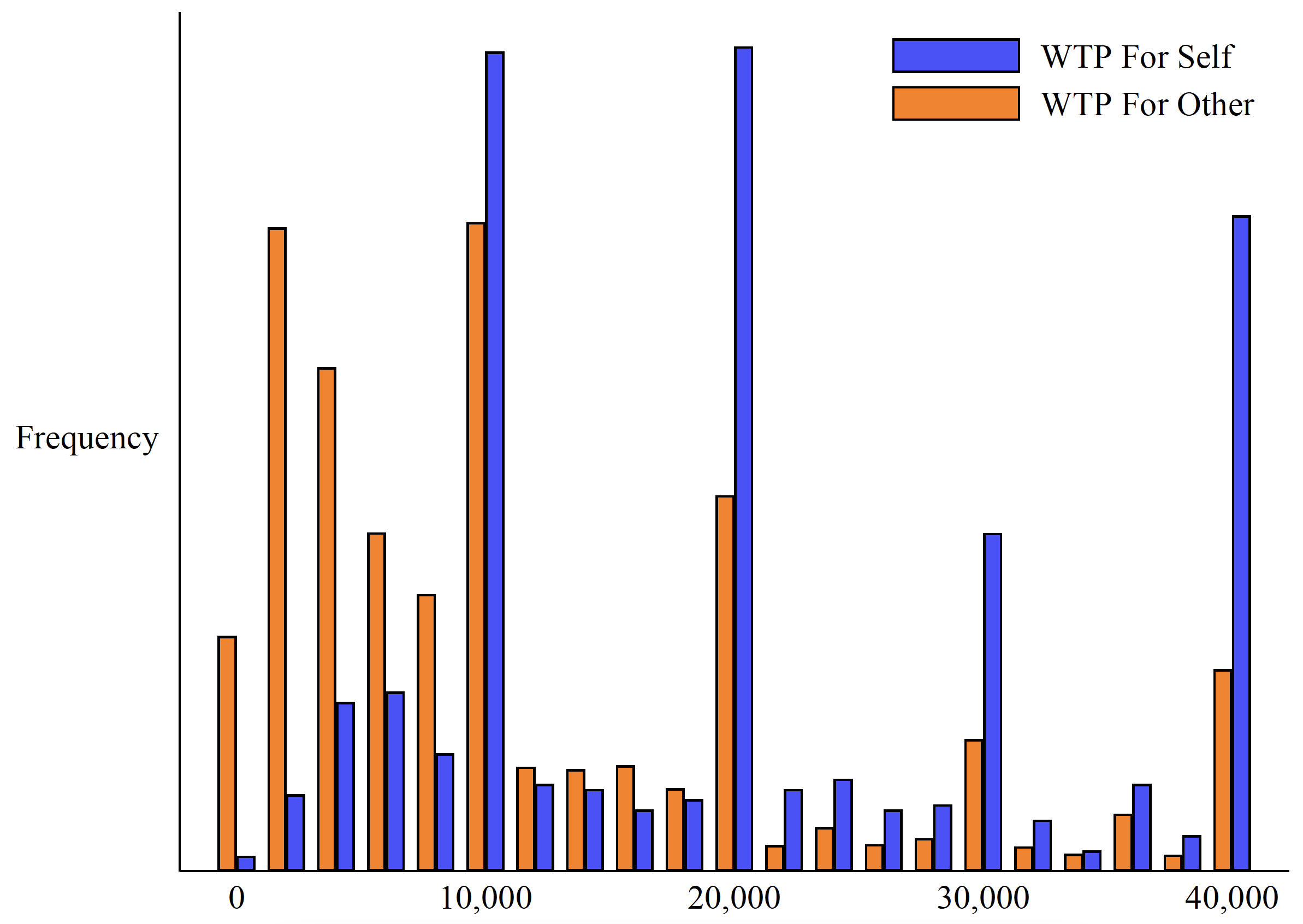 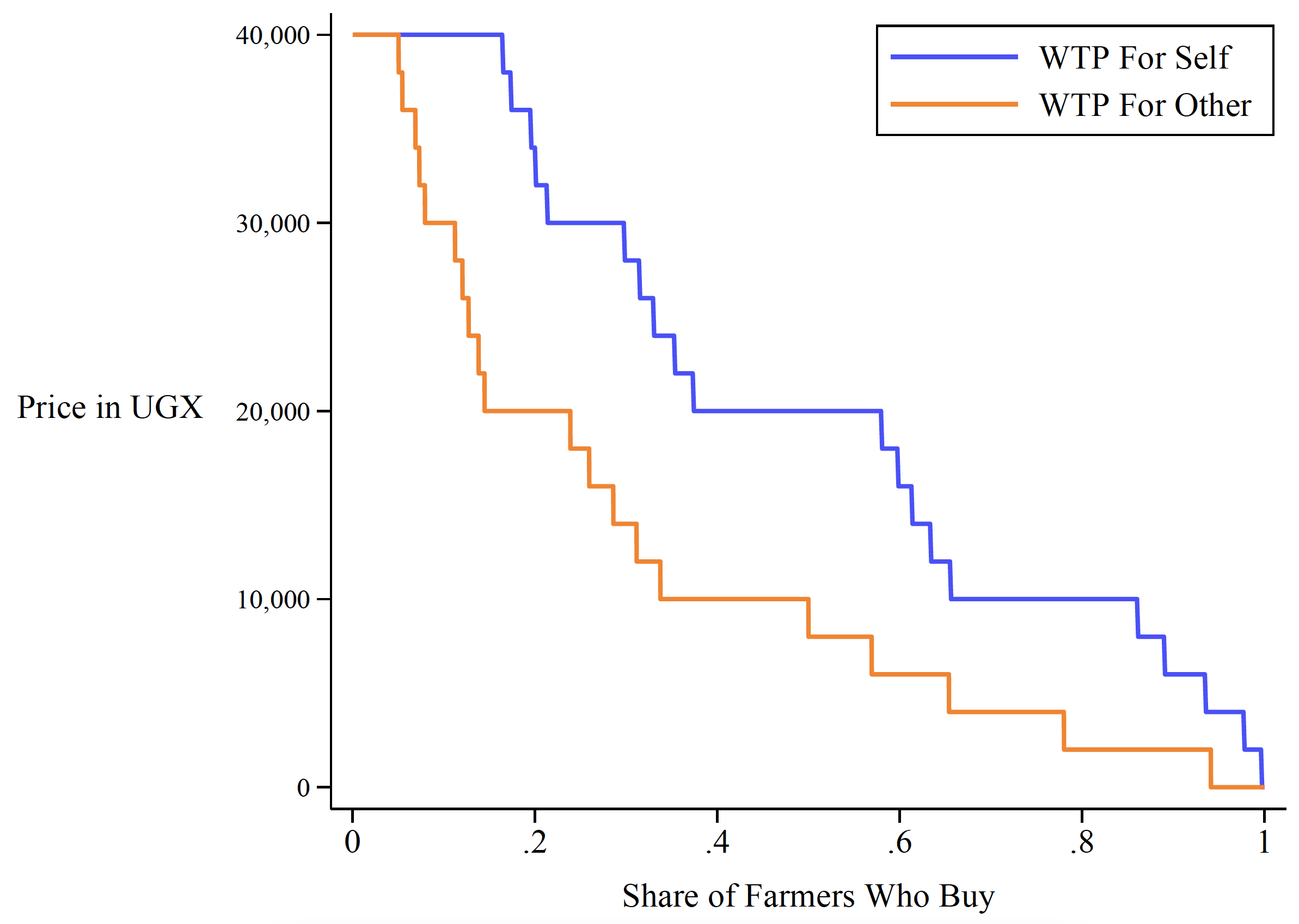 After learning farmers are willing to pay for another farmer to receive training, a policymaker may ask: why do they expect to benefit from it? For pest-control technologies, two explanations stand out: contagion and knowledge externalities.

Valuation data show farmers are willing to pay more for their plot neighbours and their closer social connections, but unobservable characteristics may drive this correlation. To discern causality, I conducted two survey experiments.

If some farmers are valued more than others, correctly identifying those who generate the highest value to society is key for successful policies. Valuation data allow us to calculate and compare the social value of different targeting choices.

In general, two key metrics to compare for targeting purposes are:

In my experiment, the farmer with the highest WTP differs from the farmer generating the highest externality in most villages (85%). Figure 2 depicts the relationship between the farmer population and the social value of training in a few targeting scenarios.2 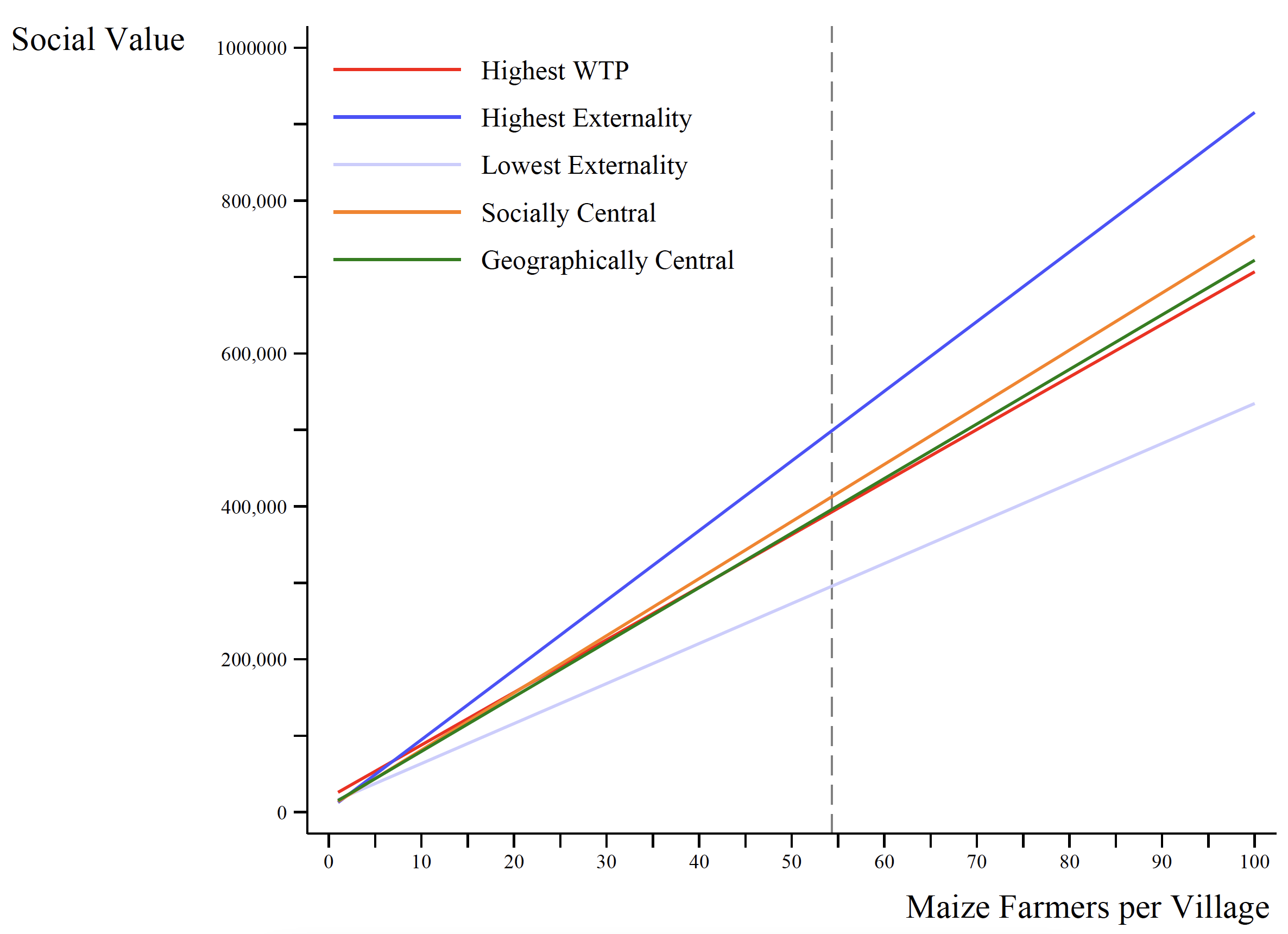 Overall, the WTP data paint a clear picture: new technologies can produce valuable externalities, and well-designed policy interventions are key to harnessing their benefits. In the context of my paper, I find that targeted policies for farmers central in both plot location and social networks would yield large quantifiable social gains, as compared to a blanket policy such as subsidies.

Lerva, B (2022), "The monetary value of externalities: Evidence from Ugandan farmers", Working Paper.