Chinese investment in Africa, while less extensive than often assumed, has the potential to generate jobs and development on the continent

So much has been written about China’s economic engagement in Africa that one is often left with the impression that the Chinese are playing a major role in the development of African economies – for better or worse. While hundreds of thousands of news articles have been written about this topic since 2000, as Brautigam (2009) has pointed out, much of the information in these articles does not hold up under scrutiny. By contrast, the academic literature on Chinese investment in Africa is thin, especially in terms of rigorous empirical studies. Whether popular or academic, most of these articles tend to describe China’s engagement with Africa as “neo-imperialism” and “authoritarian capitalism”; exploiting natural resources and local labour while undermining democracy. Sometimes though, China is credited with boosting growth across the continent through its impact on the prices of Africa’s natural resources.

Yet, China’s interest in Africa surely has something to do with the renaissance of economic growth across much of the continent. Average annual GDP growth in 38 African countries was 4.9% between 2000 and 2015; in resource-poor Ethiopia the average was just under 10%. In fact, only seven of the 17 countries in Africa that had annual GDP growth rates above the continental average of 4.9% are considered resource rich.

The fact that growth has been rapid in many resource poor countries, and has continued past the collapse in commodity prices, calls into question the notion that Africa’s recent performance is intimately tied to Chinese demand for its commodities (Diao et al. 2017). Are there other ways in which China’s interest in Africa relates to the renaissance of economic growth across much of the continent? More importantly, how can Chinese engagement accelerate growth in employment and labour productivity in Africa?

In new research (Brautigam et al. 2017), we aim to present a balanced view on what we know about Chinese investment in Africa and what it means for growth. We take a two-pronged approach to understanding this relationship. We begin by using official Chinese data to examine the patterns of Chinese engagement in Africa for the period 1998 to 2015. Importantly, we distinguish between planned and realised investments, focusing only on the latter. We then evaluate what the available data tell us about how Chinese investment could contribute to African growth and development and compare this to the picture painted in the literature.

African countries make up less than 4% of China’s global trade and less than 3% of China’s global foreign direct investment (FDI) flows and stocks. Similarly, China only accounted for around 5% of global FDI into Africa in 2015. Africa is much more dependent on China for trade than for FDI. In contrast, roughly 25% of Africa’s global trade in 2015 was with China. The relatively low share of Chinese FDI in Africa, revealed by the aggregate statistics, is consistent with work showing that a significant proportion of planned Chinese investments registered with the Ministry of Commerce have not been implemented (Brautigam and Xia 2017). 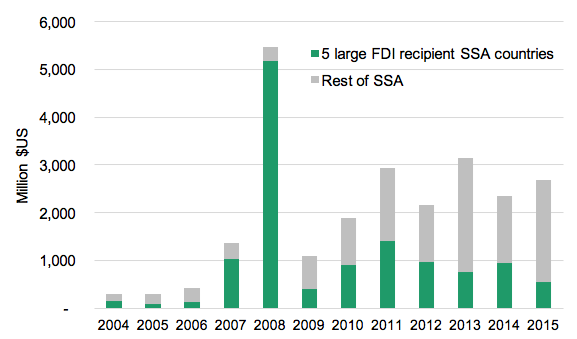 Source: Authors’ calculations using data from Table of “China's Outward FDI Flows by Country and Region” in China Commerce Yearbook (various years) published by Ministry of Commerce (MOFCOM). The data are the same as from the China Statistical Yearbook: "Oversea Direct Investment by Countries or Regions”; and UNCTAD Bilateral FDI Statistics.

Chinese FDI in Africa is starting to diversify, both in terms of sector and location. While mining and construction still account for the bulk (54%), the stock of manufacturing FDI increased to 13% of China’s FDI stocks in Africa in 2015. Consistent with the increase in the manufacturing stock of FDI, Figure 1 shows how Chinese FDI in Africa has started to diversify away from the traditional recipients of global FDI – the Democratic Republic of the Congo (DRC), Nigeria, South Africa, Sudan and Zambia – into high-growth countries that are not necessarily resource-rich. Once these top five African recipients of global FDI are excluded, China’s share of FDI into Africa goes from around 1% in 2004 to almost 9% in 2015.

We find that in most of Africa’s fastest growing economies, investment is going into sectors other than natural resource extraction. Although Chinese FDI did not account for a large share of investment in most of these countries, China’s share of FDI and loans increased more rapidly in Africa’s fastest growing economies in the period 2012-2015 than in the rest of Africa. This suggests that Chinese FDI in Africa is not radically different than FDI from other countries, and is not isolated in resource extraction in a handful of countries, as is often portrayed.

While the data we analyse are not exhaustive, they shed light on opportunities for research that can address the disconnect between the data and the literature and identify the potential for Chinese investment to spur African growth. The increasing focus on productive sectors in high-growth countries suggests that there could be opportunities for Chinese investment to create jobs, supply local markets and create linkages and knowledge spillovers to local firms. A new strand of research (Brautigam et al. 2017, Abebe et al. 2017) is beginning to address the latter; it demonstrates some positive synergies between Chinese and local manufacturing firms in Ethiopia, and the potential for them to develop in Ghana, Nigeria and Tanzania. All four of these countries belong to the group of Africa’s 16 fastest growing economies.

However, we also find that China still has a very small presence in these countries’ manufacturing sectors. This highlights our findings from the data – Chinese investment in Africa is not large enough to be either a calamity or panacea, but the evidence from Ethiopia (Abebe et al. 2017) indicates that countries can harness its potential to achieve meaningful growth in jobs and productivity.