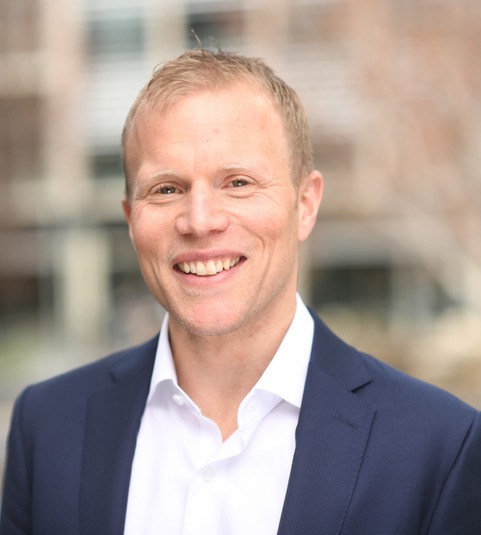 There is a general consensus that households in low- and middle-income countries (LMICs) have insufficient access to credit. Twenty years ago, economists were optimistic that microfinance would fill this void, yet most of the evidence suggests that microfinance loans do not have transformative effects on the average borrower (Banerjee et al. 2015, Meager 2019).

Traditional microfinance loans are unsecured and characterised by high interest rates, large transaction costs, and low uptake. In contrast, more than 80% of total household debt in the US is secured by a physical asset (Federal Reserve Bank 2020). Using collateral to secure debt helps overcome economic frictions, thereby expanding the supply of credit and reducing the cost of credit provision. Yet, secured debt is much less prevalent in poor countries. Why? First, property rights are difficult to establish and enforce in economies with weak legal institutions, which translates to a high cost of repossessing collateral for creditors. This is especially true for households in remote areas, where the costs associated with locating, repossessing, and redeploying collateral are prohibitive. Second, the primary source of income for many households in LMICs is self-employment, which is subject to more frequent shocks than formal sector wages. As such, the households are more likely to default for nonstrategic reasons and may choose to avoid the risk of having assets repossessed.

In our recent paper (Gertler, Green, and Wolfram 2021), we argue that collateral need not be physically repossessed in order to serve a useful role in access to credit. Recent technological innovations have facilitated the use of digital collateral without the need for costly and inefficient physical repossession, where our findings help validate how securing a loan with digital collateral can lead to positive benefits for both borrower and lender.

A primer on digital collateral

An emerging example of digital collateral is pay-as-you-go financing (PAYGO), which typically requires a nominal down payment to take possession of an asset, followed by frequent, small payments made via a mobile payment system. PAYGO financing crucially relies on an embedded lockout technology that allows the lender to remotely disable the flow of services from the asset. In other words, the lender can digitally repossess the asset without the need to repossess it physically.

Digital collateral has several technological advantages: disabling the flow of services is cheap and easily reversible. Borrowers unable to make a payment do not lose the asset, rather they are simply unable to consume the flow of services from the asset until they start paying again. These advantages allow for a richer space of financial contracts involving flexible repayment schedules (for example, pay per usage) and temporary digital repossession for non-payment.1

Much like traditional collateral, securing loans with digital collateral reduces the firms' cost of providing financing relative to unsecured credit. First, it provides households with an incentive to repay the loan when they can afford to do so, thereby mitigating the moral hazard problem of strategic default. Second, when combined with a down payment, digital collateral serves as a screening mechanism to overcome adverse selection. That is, a borrower that is more likely to face a negative income shock will have less incentive to accept a digitally secured loan. By reducing moral hazard and adverse selection, lenders can offer more financing to credit-worthy borrowers at terms they find acceptable.

We conduct a field experiment to identify the impact of digital collateral on market frictions and economic outcomes in partnership with Fenix International, the largest solar-home system (SHS) provider in Uganda. An SHS provides a household with access to a modest amount of electricity without being connected to the grid. Fenix offers PAYGO financing for their SHS as well as follow-up loans for good payers, where the SHS is re-used as digital collateral to secure the loan.

Our study examines the effects of digital collateral with Fenix’s most popular follow-up product: a cash loan offered to customers near the beginning of each school term when school fees are due.

Figure 1 Solar panels being placed on a customer’s home 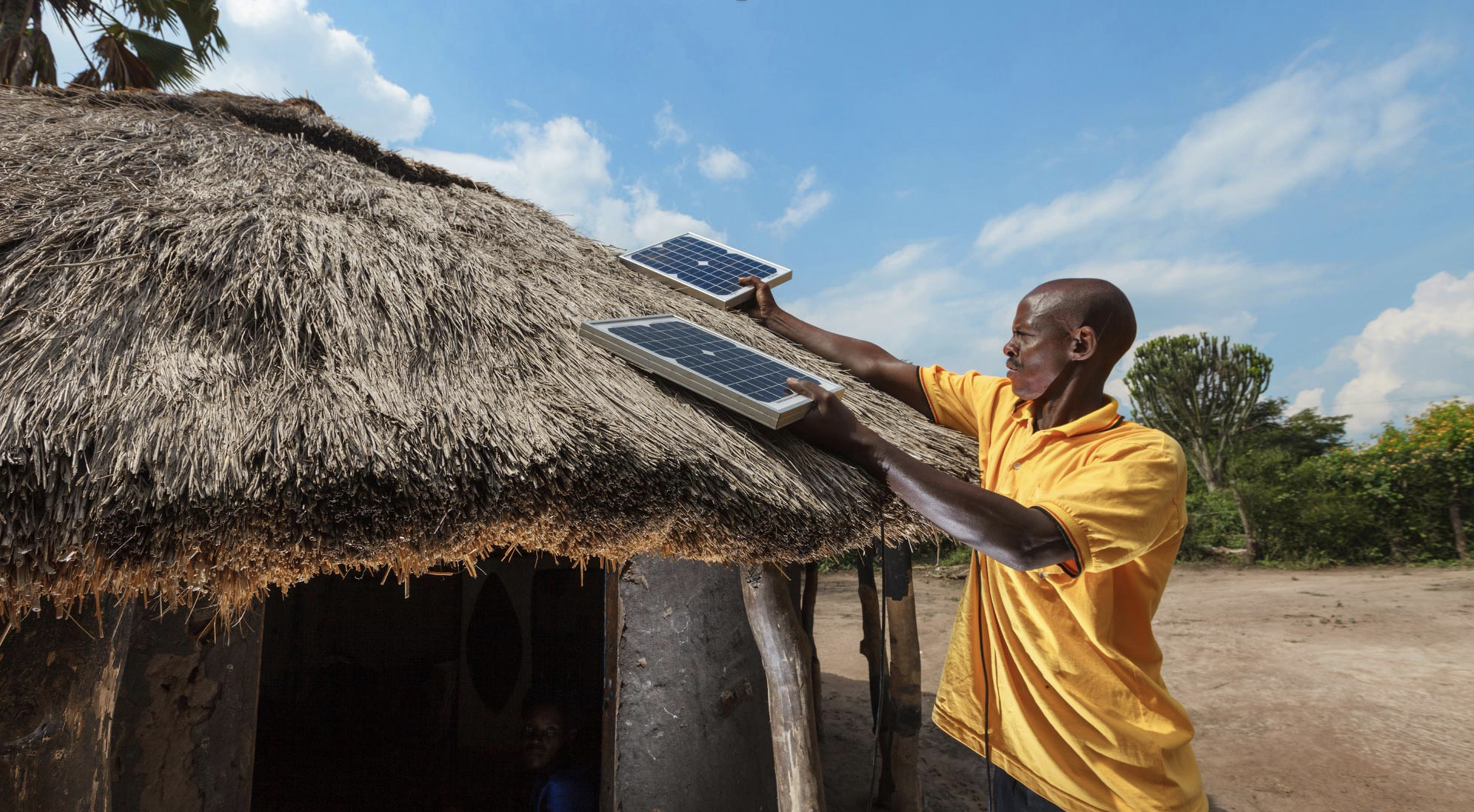 Our experimental design randomises the sample into a control and three treatment groups:

More than 12% of the over 27,000 customers who received an SMS about the loan indicated they were interested. Of those offered a loan after expressing interest, 47% accepted the offer and received a loan. These high take-up rates suggest the loan terms were attractive to customers and help alleviate credit constraints.

Second, consistent with our hypothesis that digital collateral reduces adverse selection, the take-up rate was about six percentage points lower for customers offered a digitally secured loan than those offered an unsecured loan.

Average repayment increased by 11 percentage points for a secured versus unsecured loan. Furthermore, the fraction of households that fully repaid the secured loan was 19 percentage points higher than the unsecured loans. About two-thirds of the total effect can be attributed to moral hazard, while one-third is driven by adverse selection. The reduction in moral hazard was concentrated among higher risk borrowers (based on repayment of previous loans), whereas the reduction in adverse selection was concentrated among lower risk borrowers. From a profitability standpoint, digital collateral increased the (annualised) internal rate of return on the loans by 38 percentage points. 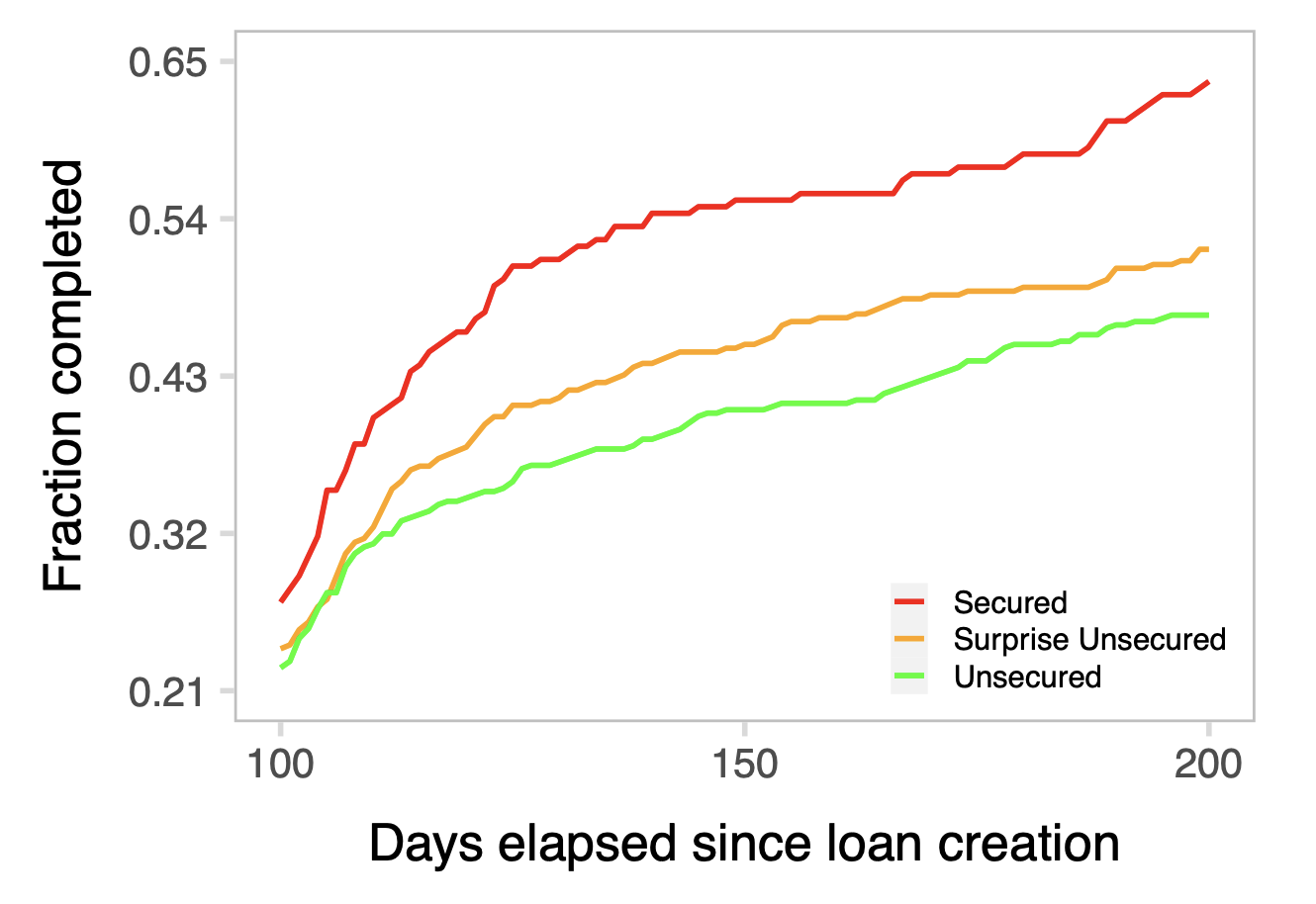 Our finding that moral hazard rather than adverse selection drives the majority of the repayment increase suggests that credit provision is both sustainable and acceptable to a large fraction of households, provided they are given the right incentives. Therefore, the potential for digital collateral to expand access to credit is significant. By contrast, if we had found that most of the increase in repayment was due to adverse selection, then digital collateral serves primarily as a screening device. Thus, only a select subset of households are both willing and profitable lending opportunities.

As seen in Figure 3, children in households that were offered a school-fee loan were significantly more likely to be enrolled at school compared to children in the control group. Accounting for loan take-up, the loans reduced the share of children who were not enrolled by half (from 12% to 6%). In addition, households with loans increased school-related expenditures by 44%, including spending on uniforms, transport, meals and supplies.

Figure 3 Effects of loan on school enrolment and expenditures 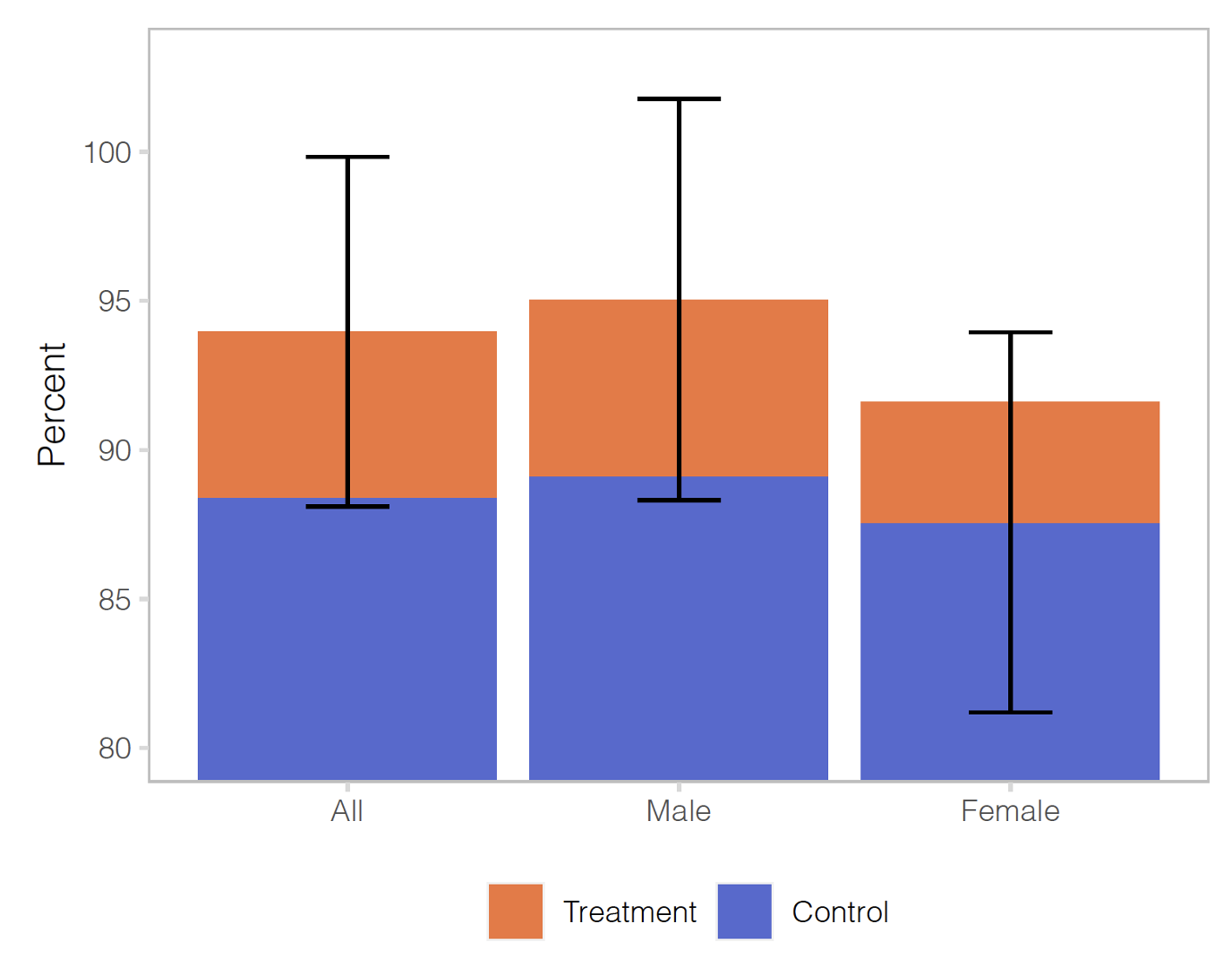 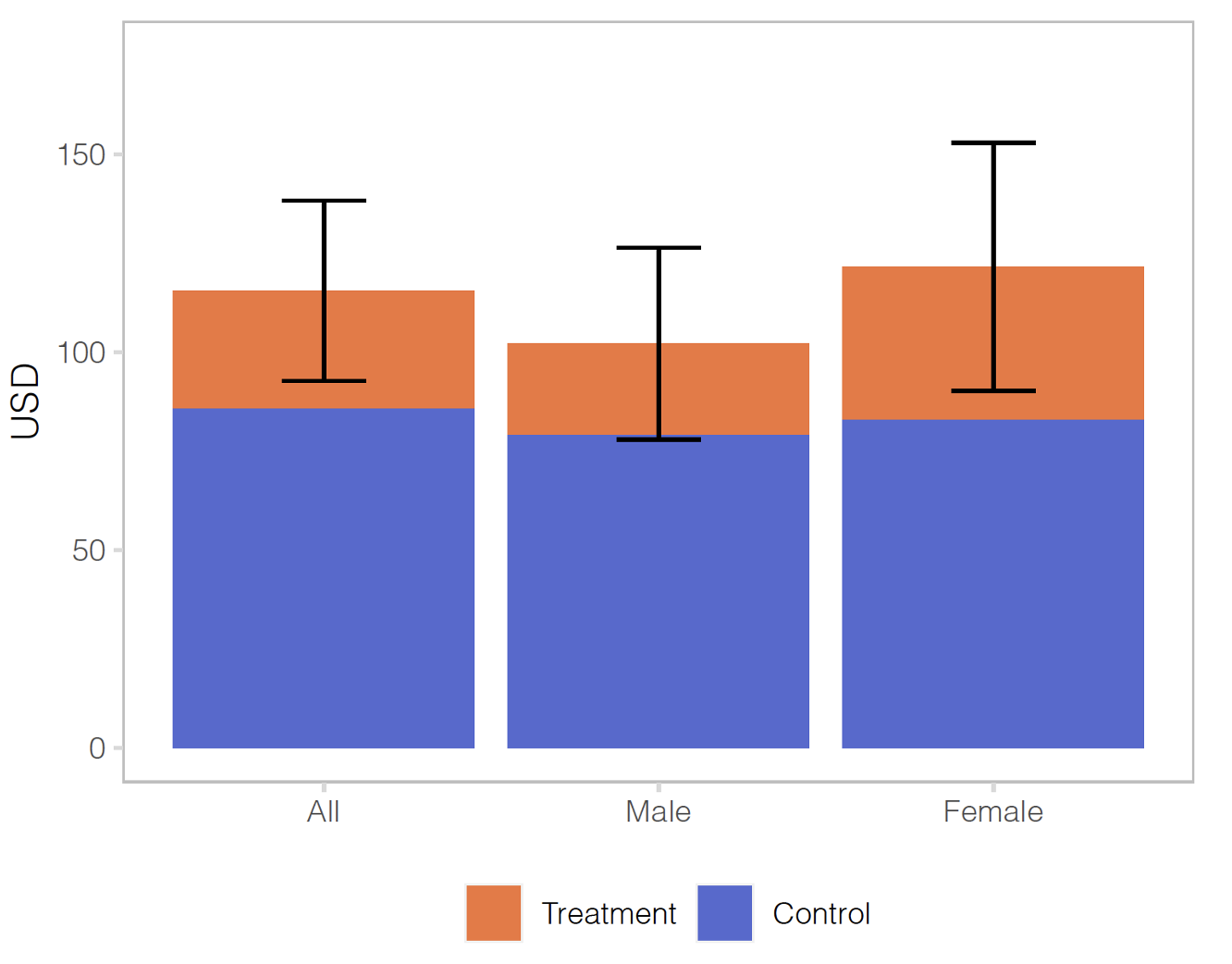 Risks and rewards of digital collateral

While our findings are mostly positive, securing loans with digital collateral is not without cost. First, there are costs to integrate and install the lockout technology into a SHS. Second, there is an (ex-post) inefficiency associated with locking devices. In our sample, the SHS was locked for 50 of the first 200 days from loan origination for the median household. On one hand, this could be viewed as a feature of the PAYGO contract; customers need not make payments on days in which they do not require or have a low value for electricity, whereas borrowers face permanent repossession if they fail to repay a traditional secured loan. On the other hand, it suggests potential room for improvement in the contract design.

Our study helps to explain why digital collateral is being employed in a range of emerging applications. For example, PayJoy, a FinTech firm based in San Francisco,  offers secured cash loans to customers who have completed the payments on an initial loan for the purchase of a smart phone. This involves recollateralising the smart phone—a strategy PayJoy is employing through large scale operations in Mexico and with a growing customer base in South Africa, India, Indonesia, and Zambia. With the proliferation of smart devices, secured lending via digital collateral could easily be extended to a wide range of devices such as laptops, refrigerators, and televisions. Importantly, the capacity to reuse collateral for future loans (as done by Fenix and PayJoy) expands the potential impact of the innovation as a vehicle for affordable access to credit.

A similar technology has been deployed in the US for subprime auto loans. Several firms have developed starter interrupt devices, which allow the lender to remotely disable the ability to start the car if the borrower is not in good standing on the loan. These devices have been installed in more than two million vehicles.2

Finally, electric, telecommunication, and water companies have been using similar contracts to finance last mile connections (Devoto et al. 2012, van den Berg and Danilenko 2014, Coville et al. 2021), and some utilities use their flow of services as digital collateral to provide financing for other asset purchases. For example, TELMEX, a Mexican telecom provides secured loans to customers for the purchase of computer equipment using the customers' access to internet service as digital collateral.3

We believe there is significant potential for utilities to further scale the use of digital collateral in providing affordable access to credit in LMICs.

Federal Reserve of the Bank of New York (2020), Quarterly Report on House-hold Debt and Credit.

1 These features are in contrast to the typical secured loan that involves a fixed repayment schedule and permanent (physical) repossession in default.