Why does aid not target the poorest? 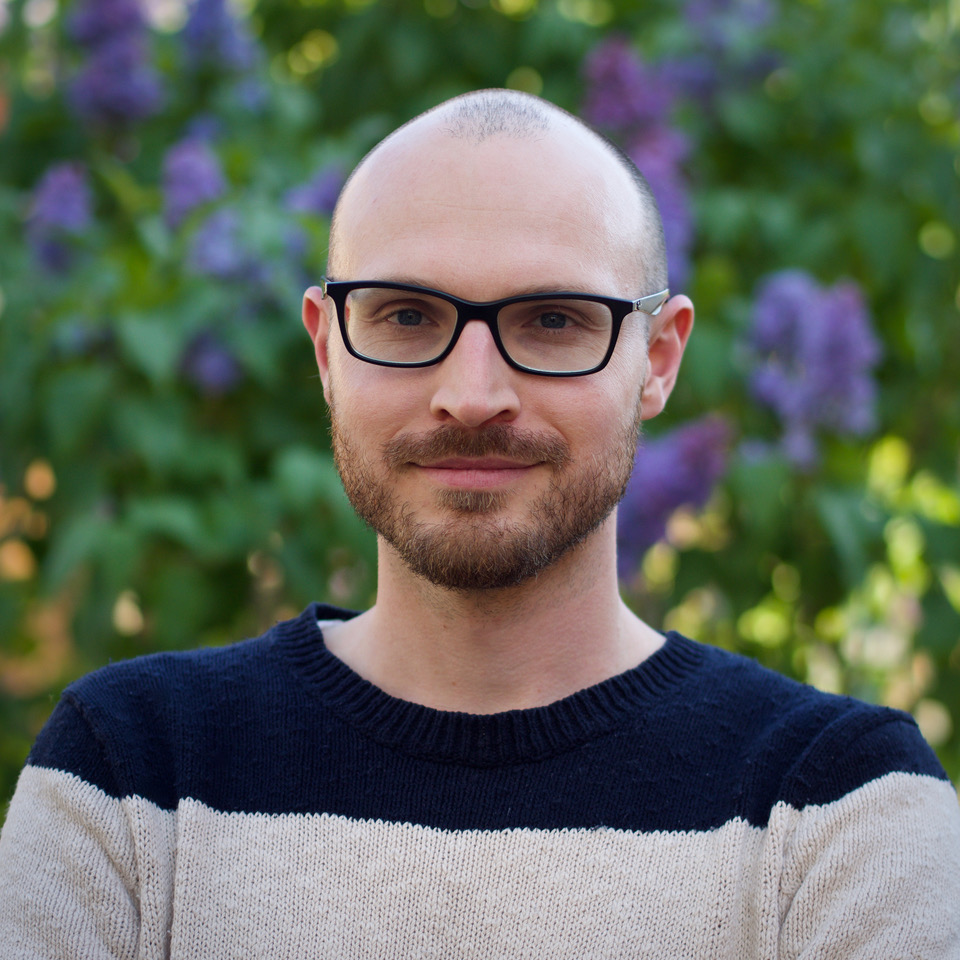 Aid donors have repeatedly expressed their commitment to the goal of ending poverty. The World Bank has literally etched this goal in stone at its Washington DC headquarters: “Our Dream is a World Free of Poverty.” More recently, donors have also committed themselves to reducing inequality by helping the poorest. This can be seen with Sustainable Development Goal (SDG) 10 or the World Bank’s goal to increase income growth among the bottom 40% of the population in the countries it works in.

Despite this, recent research has shown that aid projects either do not disproportionally flow to poorer parts of countries or actually favour richer areas (Öhler and Nunnenkamp 2014, Öhler et al. 2019, Custer et al. 2017, Briggs 2017, 2018a, 2018b, Marty et al. 2017). These effects do not seem to be driven by differences in population, population density, or the presence of aid-attracting capital cities. This is surprising because most aid projects primarily impact people close to them. This means that the way in which aid is geographically targeted can really matter for poverty alleviation. In new research (Briggs forthcoming) I show that these patterns exist across world regions and over time, and then I test five explanations for why aid seems to avoid poorer parts of countries.

I do this by projecting a grid onto the world and measuring light at night (a proxy for local economic development), population counts, and the location of World Bank aid projects for every year between 1995 and 2005. Figure 1 shows a summary of the data, where red cells received at least one precisely targeted World Bank project between 1995 and 2005, black cells received no World Bank project aid but are in countries that received aid, and grey cells are in countries that received no World Bank aid.

I then control for population and examine how aid provision correlates with light at night within each country in each year. The results are shown in Figure 2. Points to the right of the red lines show aid flowing to brighter places. Conditional on population, brighter places are more likely to get aid (top plots), and when they get aid, they get more in dollar terms (bottom plots). These effects exist across time (left side) and world regions (right side).

Figure 2 The relationship between light at night and aid 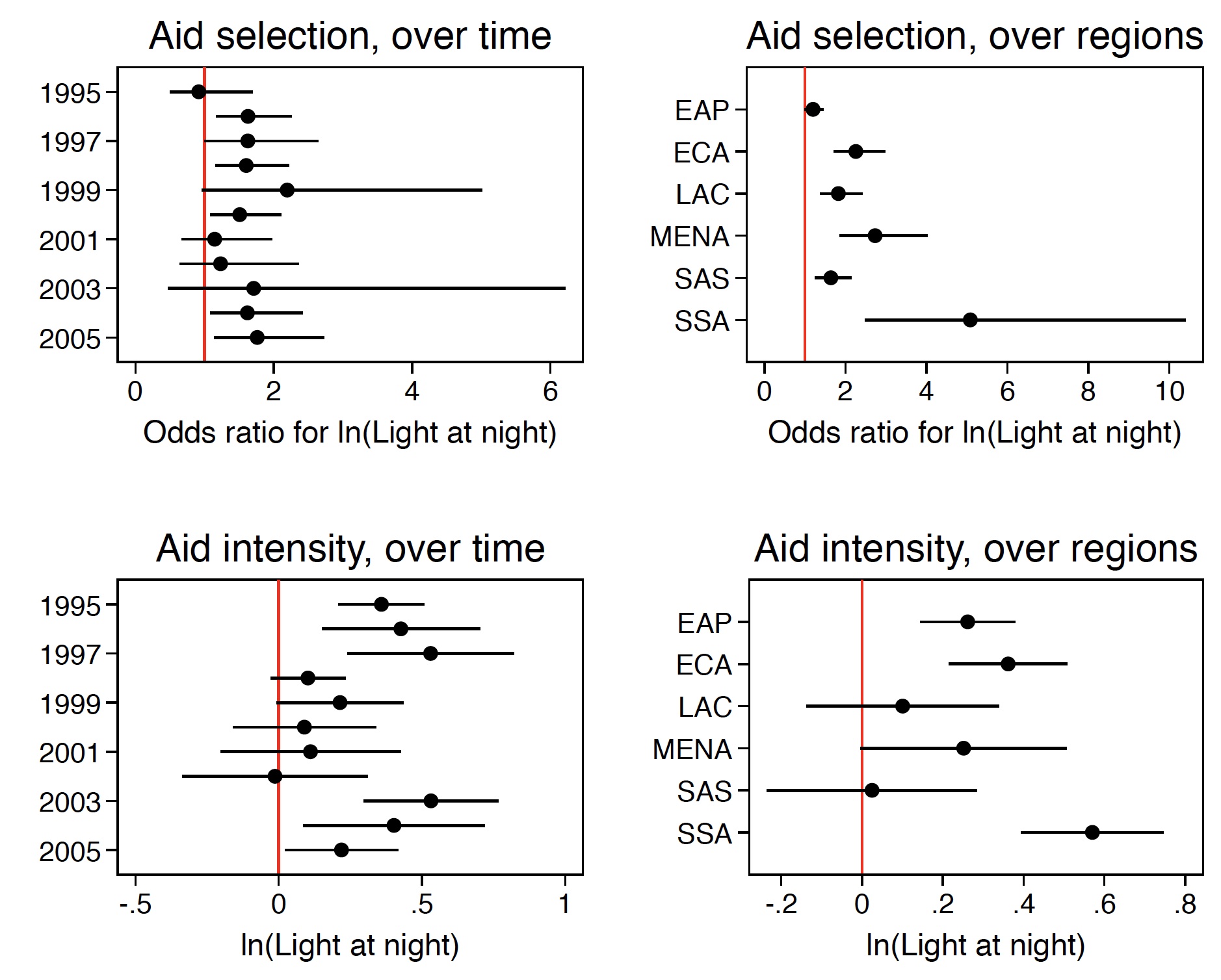 What could explain these patterns?

While this sort of result is consistent with past work, it is also somewhat puzzling. In response, I conducted a pre-registered survey experiment on World Bank aid managers known as Task Team Leaders (TTLs) to test a number of explanations for this apparent lack of geographic poverty targeting. In the experiment, I showed the TTLs a pair of aid projects with randomised features, such as some projects being placed in a richer or more urban part of a country, and I asked them:

While these explanations are intuitive – it is reasonable to think that aid to an urban area can yield more returns per dollar compared to a remote area – most of them received no support. For example, TTLs largely believed that client governments care about targeting aid politically. When a TTL was told that a project was in the hometown of the recipient country’s President, they chose that project as being of more interest to the client government about 70% of the time. Further, they believed that client governments usually do not care about the income of the project location or how urban it is, and to extent that they care, they are thought to be pro-poor.

The results are shown graphically in Figures 3 and 4, where each dot shows the probability of a project with that feature level being selected.

Figure 3 Effect of project attributes on the probability of selection 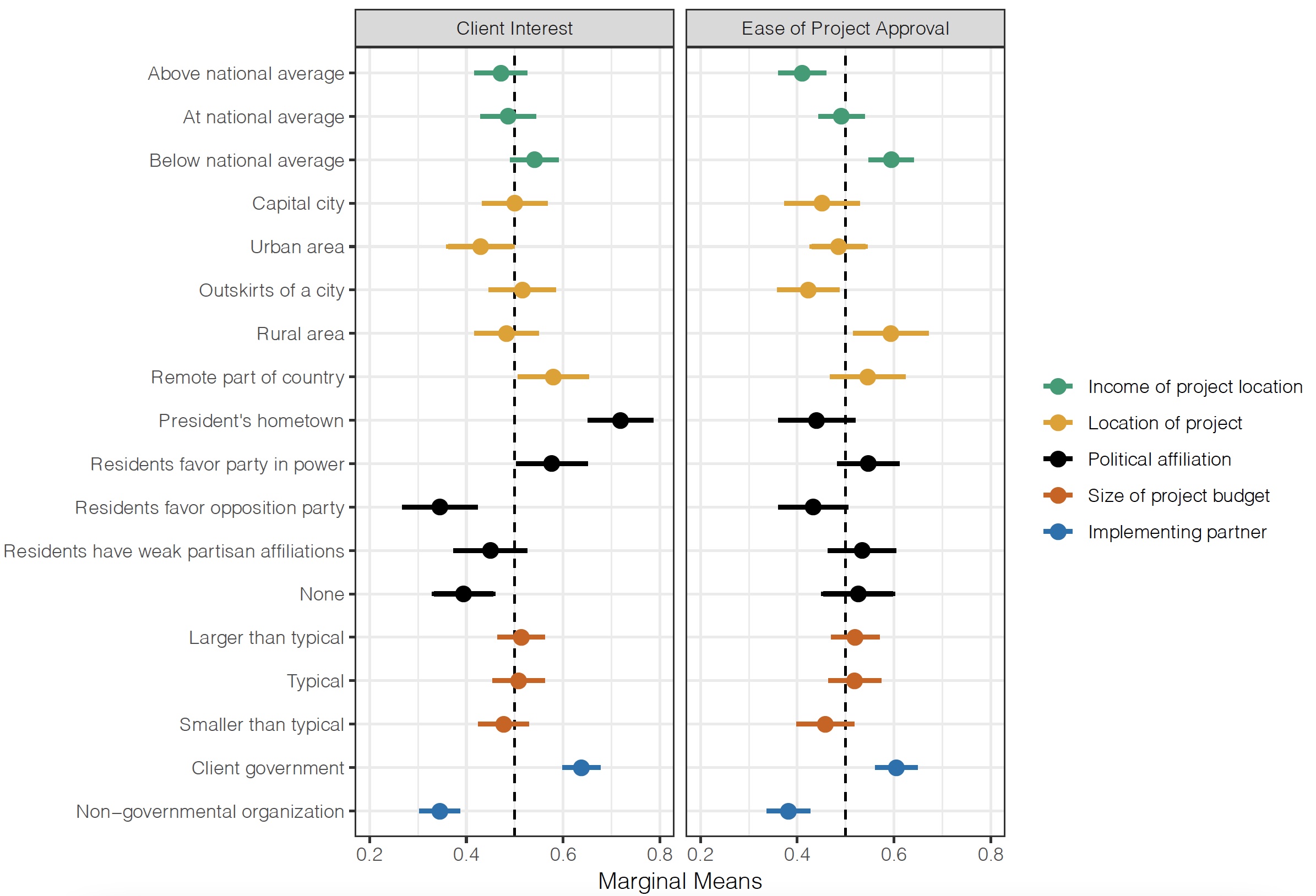 Figure 4 Effect of project attributes on the probability of selection 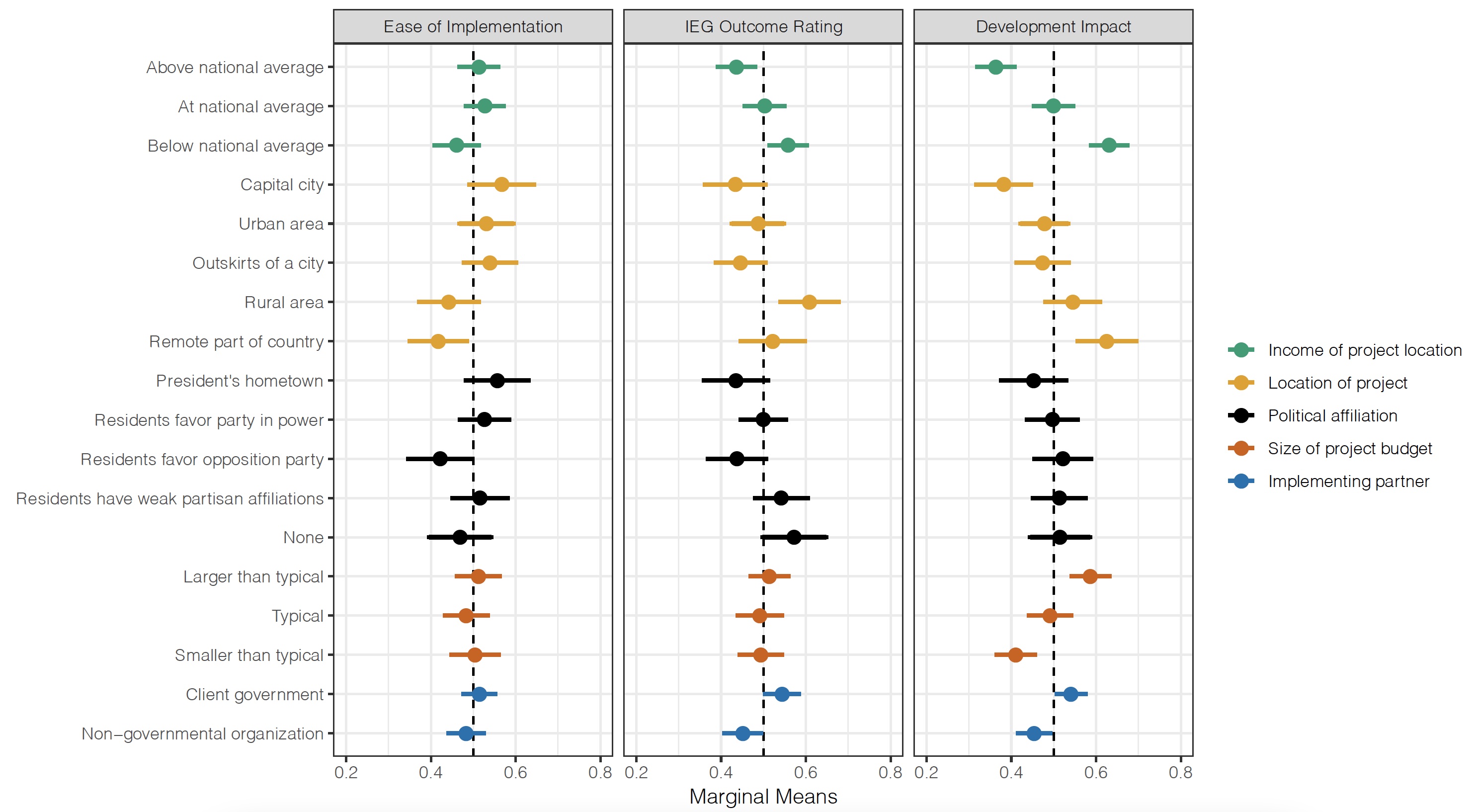 Further, TTLs expected projects in poorer and more rural areas to receive higher evaluation ratings and they thought such projects were better for development. These are again inconsistent with common explanations for pro-rich subnational aid targeting. For example, it was previously thought that projects in poorer or more rural areas may receive worse ratings because these implementation environments were more uncertain. TTLs do not agree.

The only explanation for pro-rich subnational aid targeting supported by the TTLs is that aid projects are more difficult to implement in poorer, and rural and remote parts of countries. Such difficult-to-implement projects might take up more time and so could slow down a TTL’s ability to get more projects approved. This matters because most TTLs reported that getting more projects approved was either extremely or very important to their career (see Figure 5). Thus, TTLs could have career reasons to avoid projects in poorer areas, which could explain at least part of why WB aid flows to richer parts of countries. 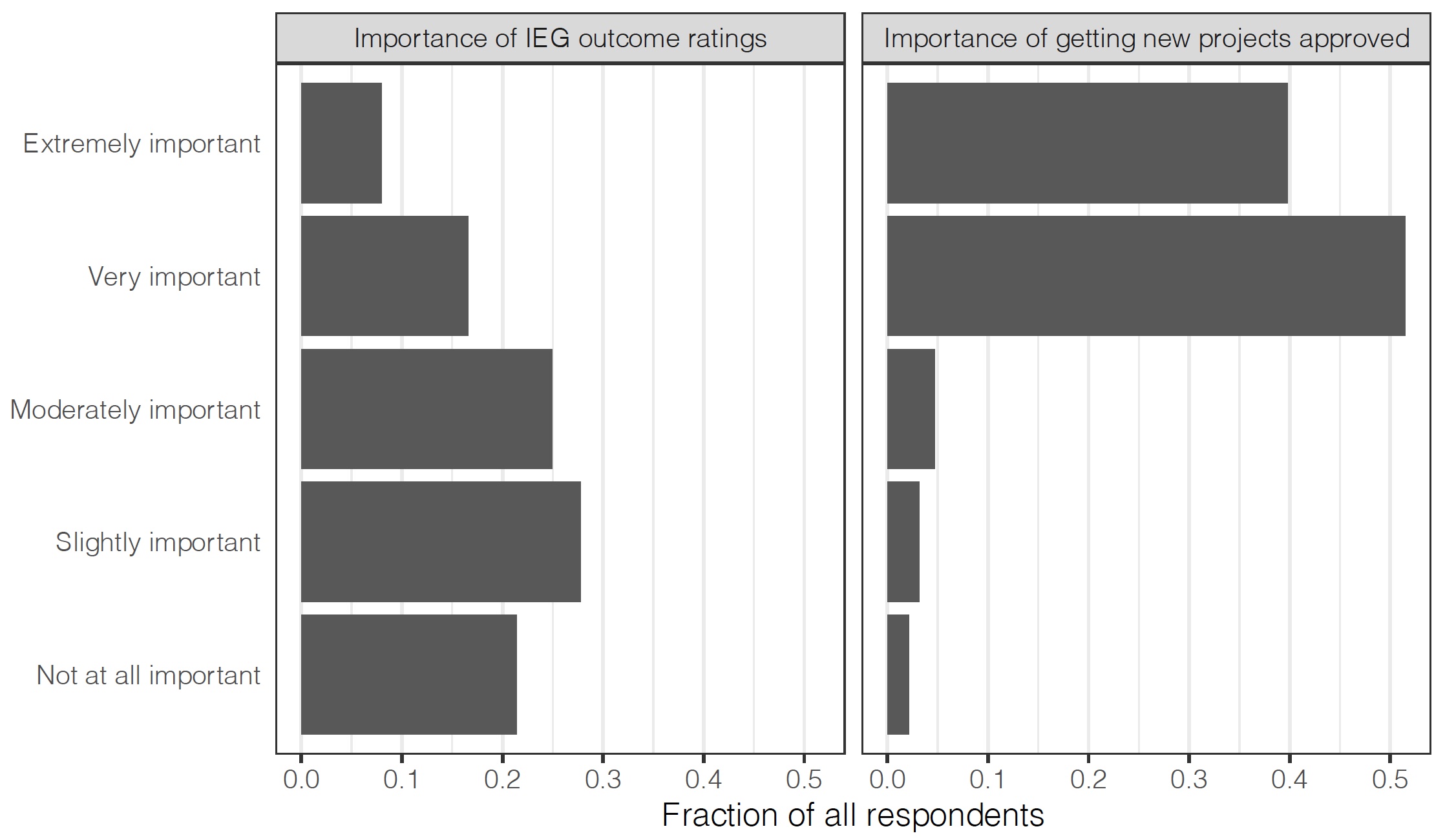 In summation, conditional on population levels, foreign aid tends to flow to richer parts of recipient countries. This is not because aid is thought to work better there; in fact, the opposite is true. It is also not because it is easier to get such projects approved. Again the opposite seems to be true. Instead, part of the problem might come down to somewhat mundane implementation concerns: it is hard to oversee implementation in poorer, rural, or remote parts of recipient countries. To the extent that one thinks that it is desirable to target World Bank aid projects to poorer parts of countries, it is worth considering if TTL incentive structures can be tweaked so that they are not forced to face a trade-off between career advancement and working on projects in places where implementation is very hard.

Öhler, H, M Negre, L Smets, R Massari and Ž Bogetić (2019), “Putting your money where your mouth is: Geographic targeting of World Bank projects to the bottom 40 percent”, PLoS ONE 14(6).