Chief of Regional Prices at the Bureau of Economic Analysis, US Commerce Department

A revision of our recent views of the global economic geography, and a rethinking of empirical analysis based on the earlier data, may be in order

When the international comparison project (ICP) published its latest estimates of purchasing power parity (PPP) exchange rates in April (World Bank 2014), there was considerable surprise and some consternation. Poor countries became richer overnight, at least relative to the rich countries; expressed in US dollars, world average GDP increased. There was a large downward revision of global income inequality. By some calculations, e.g. Chandy and Kharas (2014) and Dykstra et al. (2014), global poverty had dropped by about a half but, as always, statistical “solutions” to global poverty are a lot more effective than real solutions.

Alas, no one stopped being poor. Yet today, some of the biggest players – the World Bank, DFID, and USAID – are judging their success by poverty reduction, the measurement of poverty (and indeed, of inequality) becomes of more than academic interest. Are the new numbers to be believed? If so, should we abandon the PPP numbers for GDP and its components that we have been using for the last six years? Have we been consistently underestimating the relative size of poorer economies, and overestimating global poverty and inequality?

To answer these questions, we need to understand why the latest round of the ICP yielded estimates of PPPs for 2011 that are so different from extrapolations based on the previous round in 2005. In Deaton and Aten (2014) we focus on the PPPs for consumption, in part because consumption excludes some of the items hardest to measure, such as government services, construction, or the trade balance, but also because the consumption PPPs are the most relevant for global comparisons of living standards.

Two features of the ICP are important here. First, because of cost, the program is not done every year. In consequence, results must be filled in for “out” years, as well as extrapolated forward from the last completed round. Until April 2014, when the 2011 results were published, PPPs were extrapolated from the 2005 round. It is these extrapolations for 2011 that are so different from the results for 2011. Second, because the pattern of consumption varies so much around the world, the project is regionally structured. Each regional office collects prices of its own goods and services, and calculates regional PPPs for the countries in the region. At a final stage, the regions are linked to give a set of global PPPs; this linking is done without disturbing the relative PPPs within regions.

Figure 1 plots the ratio of extrapolations to actuals for the previous (2005) round; these extrapolations were based on then most recent (1993) round. Extrapolations are calculated by updating the benchmark PPPs using the growth of the consumer price index for each country relative to the growth of the US one. The figure plots the ratios of actual to extrapolated PPPs against the logarithm of GDP per capita in 2005 PPP dollars. Most points are positive, and there is a strong downward slope. The move from 1993-based extrapolations to 2005 actuals shrank the world relative to the US and shrank poorer countries by more than richer countries. These revisions were much commented on at the time, and one of us speculated that the linking of regions might have overstated prices in Asia and Africa (Deaton 2010). However, the 1993 round was unsatisfactory (UN 1998), and the 2005 round made many improvements in methodology and in country coverage. (China, like many African countries, had never formally participated before 2005, and India did not participate between 1978 and 2005.) So that there were large revisions in 2005 was not a surprise. 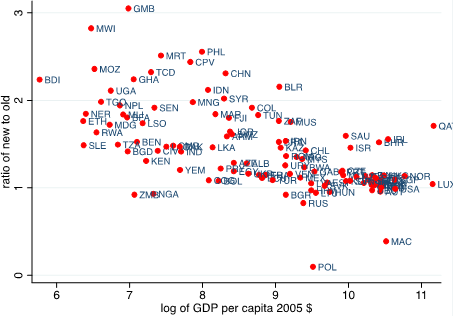 Figure 2 shows the same graph for the new round in 2011. This time the ratios of actuals to extrapolated are mostly below one, so world average GDP relative to the US has increased. The revisions are not strongly correlated with per capita GDP, but there is more of a positive slope if we exclude the oil and other commodity exporters on the bottom right of the figure. But the key point here is that much, but not all, of the upward revision of PPPs in 2005 round was undone in 2011. Table 1 shows the logs of the ratios of the extrapolations to actuals, and shows the up and down pattern by region for those countries present in both rounds. Note also that, apart from the Confederation of Independent States, where special factors operate, the standard deviations of the revisions within regions are much reduced in 2011 compared with 2005 – consistent with the more limited methodological revisions in 2011. An analysis of variance, assigns two thirds of the variance in the revisions to regional effects – consistent with the idea that the lion’s share of the revisions in 2011 came from changes in how the regions were linked. 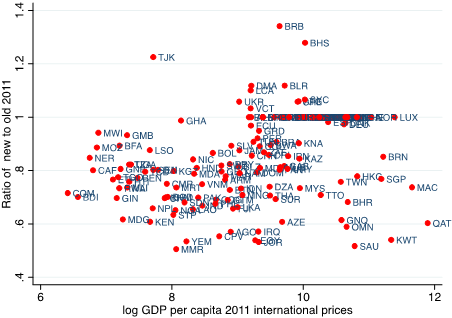 Table 1. Regional revisions from extrapolations in 2005 and 2011

Notes: CIS is the Confederation of Independent States. The means are calculated only for countries that are common to both rounds, and are unweighted country means of the logarithm of the ratio of the ICP consumption PPP to the previously extrapolated consumption PPP.

In the first, regional, stage of the international comparison project, each region develops a set of PPPs for its own countries. At the second, global stage, the regions are linked while preserving the intra-regional relative PPPs; this “fixity” constraint was first imposed by EUROSTAT as a condition of participation, but has subsequently been adopted by the other regions. It has a statistical and economic (as well as practical) justification in that it prevents the PPP of Kenya relative to Tanzania, or Chile relative to Brazil, for example, being affected by arguably irrelevant information from Tajikistan, China, or Canada. Fixity means that the price indexes used for linking, one per region, have a “tectonic” property, moving whole continents relative to one another.

In 2005, the tectonic indexes were calculated from a special list of 18 countries, known as the ring, at least two in each region. A special ring list of 1,000 or so items was priced in each country, and the results used to derive regional price effects that were used for linking (see Diewert 2013 for details). As noted in Deaton (2010), a concern is that the ring list contained a large number of very tightly specified rich country items (a 2004 bottle of Bordeaux with specified alcohol content and label details, a front-loading washing machine with specified spin speed, etc.) so that if those goods were uncommon, unrepresentative, and expensive, the price levels in poorer countries would have been overstated. The ring procedure was also seen as worrisome because of its dependence on the selection of countries, so that the 2011 round used a global core list, with every country pricing overlapping subsets of goods, so that it was easier to avoid unrepresentative and expensive commodities, and so that all countries were treated symmetrically.

If the ring procedure did indeed overstate price levels in poor countries, the effect should be detectable using the 2011 and 2005 data for the ring countries by comparing inflation according to the ICP with inflation from the domestic CPI. Figure 3 plots, against log GDP per capita, the growth in consumer prices in each ring country from the ICP minus the rate of growth in the national CPI; Britain is the numeraire, and so has a difference of zero. Consistent with the ring story, there is a close positive relationship between the discrepancy and per capita GDP; the poorer countries at the left have negative numbers indicating that international-comparison-project inflation was much less than CPI inflation. South Africa, interestingly, looks more like a rich country, which makes sense given the availability of rich country goods there. If we split the countries by regions, these data suggest an overstatement of about 20% in all national consumption PPPs in Asia, Africa, and Western Asia in 2005. 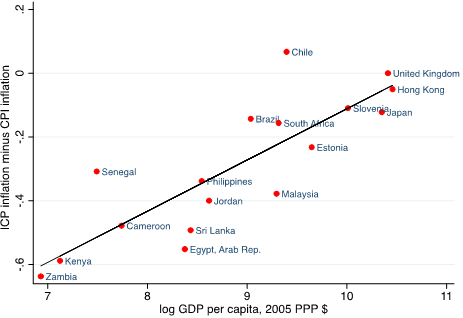 A cross check on these calculations comes from an examination of the relationship between price level indexes (the ratio of the PPP to the exchange rate) and per capita GDP. According to the Balassa-Samuelson theorem, price levels are lower in poorer countries, one of the main reasons for the ICP in the first place. If we fit lines to these Balassa-Samuelson relationships in ICP 2005 and ICP 2011, we can calculate the average distance apart of countries in the three affected regions. Once again, we get 20%, so that, if the Balassa-Samuelson lines are stable over time, this calculation provides an independent estimate of the 2005 overstatement.

These calculations are tentative – there are doubtless other explanations, including ongoing methodological change, as well as sampling errors from different goods within each basic heading of consumption – and they do nothing to account for substantial revisions in PPPs for individual countries. But right now, we believe that they offer the best story that we have. If accepted, they will call for substantial revision of our recent views of the economic geography of the world, as well as a rethinking of empirical analysis based on the earlier data. The Penn World Table is currently considering how to incorporate the new results into their time series, but much else will also have to be rethought.

Chandy, Laurence, and Homi Kharas (2014), “What do new price data mean for the goal of ending extreme poverty?”, Brookings, 5 May.

Diewert, Erwin (2013), “Methods of aggregation above the basic heading level: linking the regions”, Chapter 6 in Fred Vogel and D. S. Prasada Rao, Measuring the real size of the world economy: the framework, methodology and results of the international comparison program, Washington, DC. The World Bank, pp. 169–96.