The audacity of hope: Poverty and aspirations

Why does poverty exist?

The persistence of poverty is typically associated with constraints that are external to individuals, i.e. conditions that the poor cannot change on their owndue to a multitude of reasons such as a lack of access to credit and insurance markets (Banerjee and Newman 1991, 1993, Banerjee and Duflo 2011), poor nutrition, famines, and health (Dasgupta and Ray 1986, Sen 1981, 1999), or institutional failures (North 1990, Acemoglu and Robinson 2012). Development economists have traditionally examined the inefficiency of these supply-side factors affecting the welfare of the poor. The policy debate is indeed mostly focused on how to design and implement public services that the market cannot provide by itself, as if the poor are always programme takers and demand-side factors are always active but fixed. However, poor people may not always aspire to improve their welfare. Internal constraints such as low self-esteem, stress, depression, and hopelessness can weaken people’s aspirations, making them less willing to take forward-looking actions so as to exit poverty (Duflo 2012). Material deprivation may itself dampen aspirations and lead to even lower levels of effort; this, in turn, may lower material outcomes, thereby setting up a vicious cycle that leads to the persistence of poverty.

The role of aspirations in development

Interestingly, Dalton et al. (2016) hypothesise that policies which stimulate aspiration levels can, at the very minimum, enhance the effectiveness of policies that tackle material deprivation. Moreover, they go on to posit that policies which simply raise aspirations could improve material outcomes even if they do not relax material constraints. Such policies would be effective in a scenario where resource constraints are not binding, allowing individuals to sustain their material aspirations with a high probability. In such a world, an increase in aspirations, in and of itself, could be a successful strategy in encouraging forward-looking behaviour. In contrast, in the presence of resource constraints that thwart people's attempts to achieve their aspirations, these aspirations may have to be revised downward in order to relieve the ensuing frustration if the status quo of aspirations were sustained (Selten 1998, 2001, Karandikar et al. 1998). Unrealised aspirations may otherwise adversely affect utility. In fact, in a resource-constrained environment, solely rising aspirations may be ineffective. Since disadvantaged people do not have access to the material means required to satisfy their aspirations, they may adjust their unsatisfied aspirations downward over time in order to mitigate frustration and maintain their sanity.

How sustainable are the aspirations of the poor? An experiment

In a recent paper, we studied how housing aspirations of people who live in poverty react over time to positive external shocks to the housing quality of their neighbours (Galiani et al. 2018). Our study population consisted of extremely poor households located in informal slums, whose members faced severe resource constraints. We used data on housing aspirations generated by a large-scale multi-country randomised field experiment that improved housing quality in poor slums in three Latin American countries: El Salvador, Mexico, and Uruguay. For identification, we exploited experimentally generated variation in the quality of the housing supply at the household level, combined with external (exogenous) variation in the length of exposure to the treatment. Within each slum, a set of randomly chosen families received new houses. In this case, families receiving new houses (the treatment group) served as the counterfactual for the families that did not receive new houses (the control group). Due to the randomisation, there is no difference in the material circumstances and aspirations between the treatment and control groups at baseline. The randomly introduced housing improvement served as an external (exogenous) shock to the gap in material circumstances between treated and control (untreated) households. We can therefore test whether being exposed to larger housing gaps encourages the untreated (control) neighbours to revise upwards their housing aspirations.

After 16 months of treatment exposure, we found that the control group's housing quality was significantly lower than that of the treatment group, but no other noticeable material gaps existed between them (the main effect of the programme is on housing and life satisfaction, although the latter partially adapt over time, as we discussed on VoxEU (Galiani et al. 2015). At the same time, the probability of aspiring to upgrade housing conditions within the slum was 56% higher among control households than in the treatment group. This suggests that the housing gap was internalised by untreated urban households, whose members now aspire to keep up with their treatment counterparts. Consistent with the previous result, on average, the probability that a control group household aspires to upgrade its housing conditions outsideof a slum was 23% lowerthan it was in the treatment group.

2. Impact on urban vs rural households

Interestingly, we find that the initial aspiration gains are mainly observed among untreated urban slum dwellers. Indeed, we find no effects at all on the housing aspirations of their rural counterparts. We hypothesise that this is attributable to the fact that urban households enjoyed higher incomes and better housing conditions at baseline than the rural slum dwellers did. Thus, the treatment-control gap in housing quality for the urban controls was significantly smaller than the housing gap faced by their rural counterparts. In other words, the moderate housing gap experienced by urban controls encouraged them to aspire to achieve the better housing conditions of their treatment group neighbours, while the seemingly insurmountable treatment-control housing gap experienced by untreated rural units thwarted the realisation of their housing aspirations. This result is consistent with the theoretical work of Ray (1998, 2006) as well as Genicot and Ray (2017) in that the relationship between aspirations gaps and aspirations formation depends on the size of the aspirations gap.

3. The impact on aspirations does not last

However, the aspirational effects observed in urban slums are not sustainable over time. We observed that the aspirational effect totally disappeared after eight additional months; this is explained entirely by adaptation in the control group, as the treatment group's housing aspirations remained invariant over the same period of analysis (see Figure 1).

Figure 1 Mean aspirations over months of exposure to the treatment, by zone 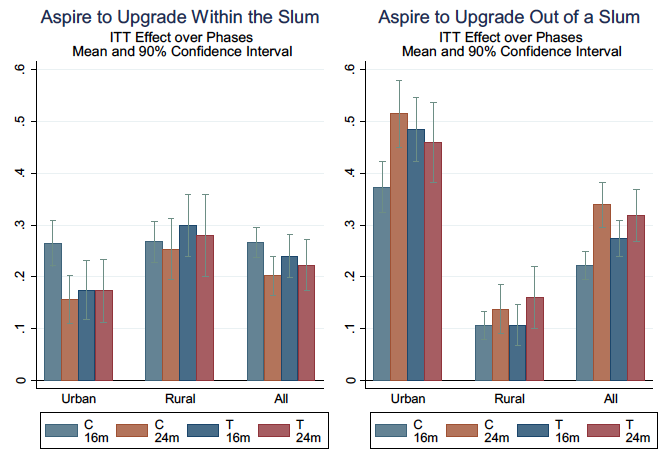 Extrapolation suggests that the housing aspiration effects declined in proportion to the number of months of indirect exposure to the treatment. In fact, on the aspiration to upgrade within the slum, we find that this effect became insignificant after 28 months.

Consistent with the aspiration adaptation result, we also find that differences in housing quality across experimental groups remained unchanged over the treatment exposure period, and no effects were found either on housing investment efforts or on external constraints such as income, savings, asset value, or labour supply –  all of which suggests that higher aspirations did not translate into forward-looking behavioural responses.

Overall, our results indicate that in excessively resource-constrained environments, encouraging aspirations that are not attainable may result in a full reverse-adaptation of aspirations as opposed to sustained forward-looking behaviour. Indeed, significant changes in the material conditions of reference-group neighbours can encourage the poor to aspire to unattainably large improvements in their living conditions, in which case their aspiration gains may revert to their baseline levels in relatively short periods of time. We argue that, since aspirations are not necessarily fixed over time, higher aspirations are not a sufficient condition for forward-looking behaviour among the poor. Policies designed to stimulate future-oriented actions simply by raising the aspirations of poor people, without helping to provide them with the external or internal means required to satisfy those aspirations, are likely to fail.

Duflo, E (2012), "Human values and the design of the fight against poverty", Tanner Lecture, Harvard University.

Sen, A (1981), Poverty and famines: An essay on entitlement and deprivation, Oxford University Press.