The impacts of technology on property tax collection and efficiency: Evidence from Ghana 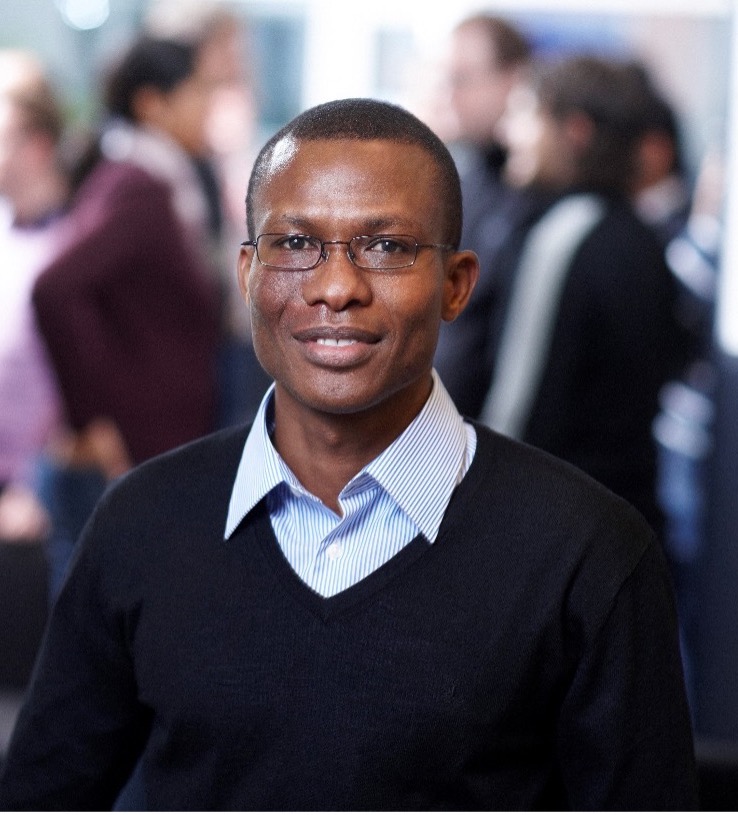 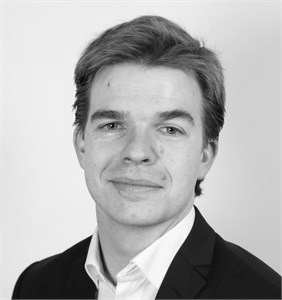 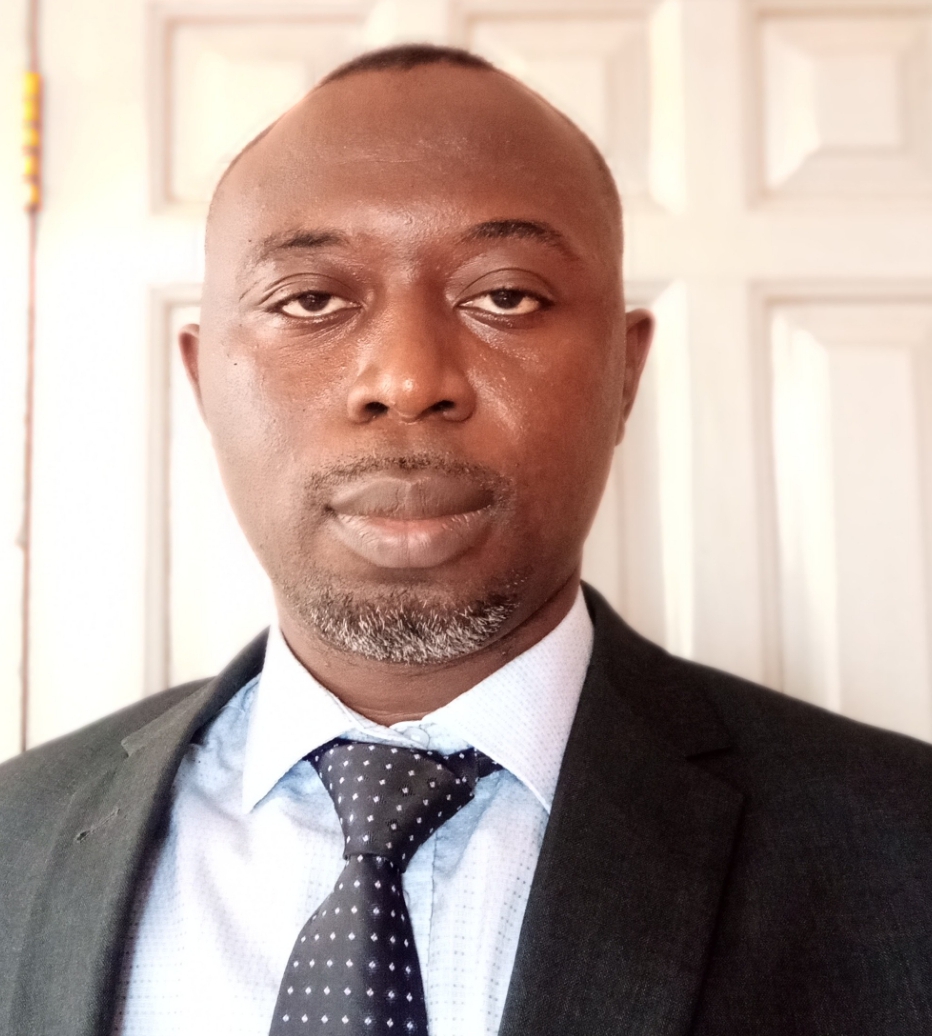 A common feature of low-income countries is that governments that collect little tax revenue typically provide few public goods. Literature on state capacity and development argues that the inability to efficiently collect taxes is at the heart of why low-income countries are as poor as they are (Besley and Persson 2009). Research suggests that the path to economic growth for low-income countries may begin with investing in the government's capacity to collect tax revenue (Albers et al. 2020), so as to provide productivity-enhancing public goods. Several theories argue that technology investments by tax administrations are central to growth in government size as a result of efficiency improvements in the collection process (Brennan and Buchanan 1980, Becker and Mulligan 2003, Fan et al. 2019, and Cowen 2021).

Gauging the potential of technology to alleviate tax collection constraints

In this context, our research provides descriptive and experimental evidence on the role of technology in improving government tax capacity (Dzansi et al. 2022). The setting is local governments in Ghana, which are in charge of collecting property taxes but collect very little in practice (Government of Ghana 2014). The technology in question consists of a geospatial database of properties embedded into an electronic tablet with GPS capabilities. Adoption of similar technologies in developing countries has significantly increased over the past decade (Fish and Prichard 2017).

The census data highlighted how poor tax collection infrastructure like limited street naming and property addressing shapes collection practices in most areas. Nearly all bills are hand-delivered by collectors to taxpayers, and collectors typically visit individual taxpayers multiple times before collecting dues (if they collect at all). The majority of tax payments are made in cash and paid directly to revenue collectors. Unsurprisingly, government officials cite ‘leakages’ by tax collectors as a significant constraint on their revenues. In this context, 17% of local governments chose to adopt technology to assist with tax collection in the form of revenue management software and electronic databases of properties. We find that this minority of local governments which chose to invest in technology have significantly better outcomes at every stage in the tax collection process. In particular, they deliver more bills, collect more revenues and have lower non-payment rates than the local governments without technology.

The tight empirical link between technology use and tax collection outcomes in the cross-section of local governments naturally invites questions about the direction of causality. To address this issue, we partnered with one large municipal government in Ghana and a private technology firm to randomise the use of its technology within the government's jurisdiction. In particular, we randomised the use of a new revenue collection software and geospatial database of properties at the revenue collector level. In the experiment, both treatment and control collectors were given a stack of around 135 bills of similar value in a randomly assigned area and tasked with collecting as much revenue as possible in six weeks. The treatment group was given an electronic tablet that uses the geospatial data to make locating households easier (see Figure 1). Otherwise, the two groups of collectors and their assigned areas were observationally similar.

Figure 1 Average amount of property taxes collected by revenue collectors, by day of the intervention and treatment assignment 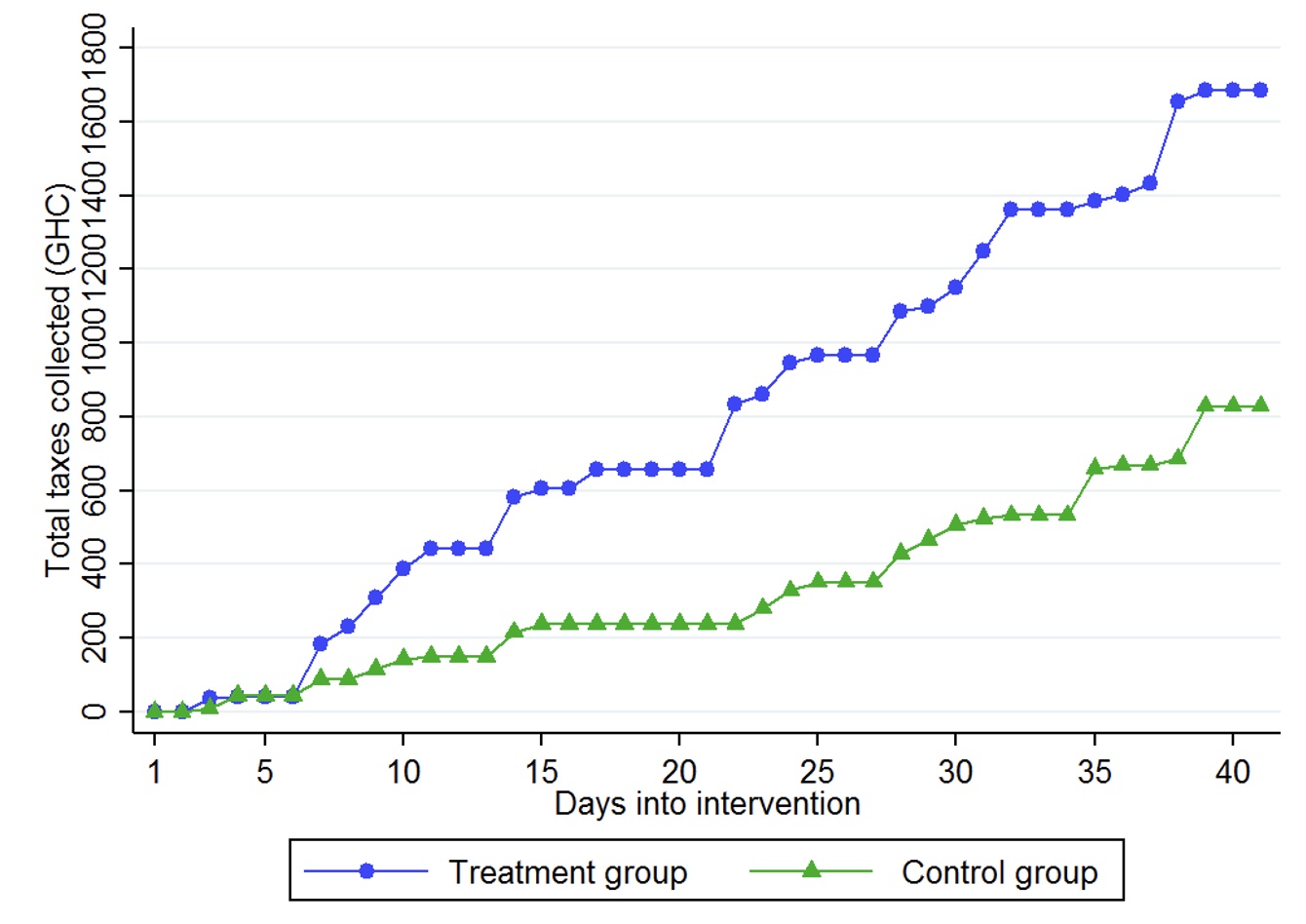 Use of technology increases tax bill delivery and revenue collection

Revenue collectors that used the new technology delivered 27% more bills than the control collectors by the end of the study. This result reflects the mechanical advantage that the technology provides in locating taxpayers more efficiently in an environment with scant property addressing. The time series of cumulative bills delivered in both groups exhibits a concave pattern, as collectors shift emphasis over time from delivering bills to following up with the households that were already served a bill in order to collect payment from them. On average, revenue collections were 103% higher among the collectors assigned to the technology group implying a much larger effect on revenue collections than on bills delivered. Moreover, we find that the treatment effect on collections grows over time leading to a rising average effect on the amount collected per bill delivered through the course of the experiment (Figure 2). 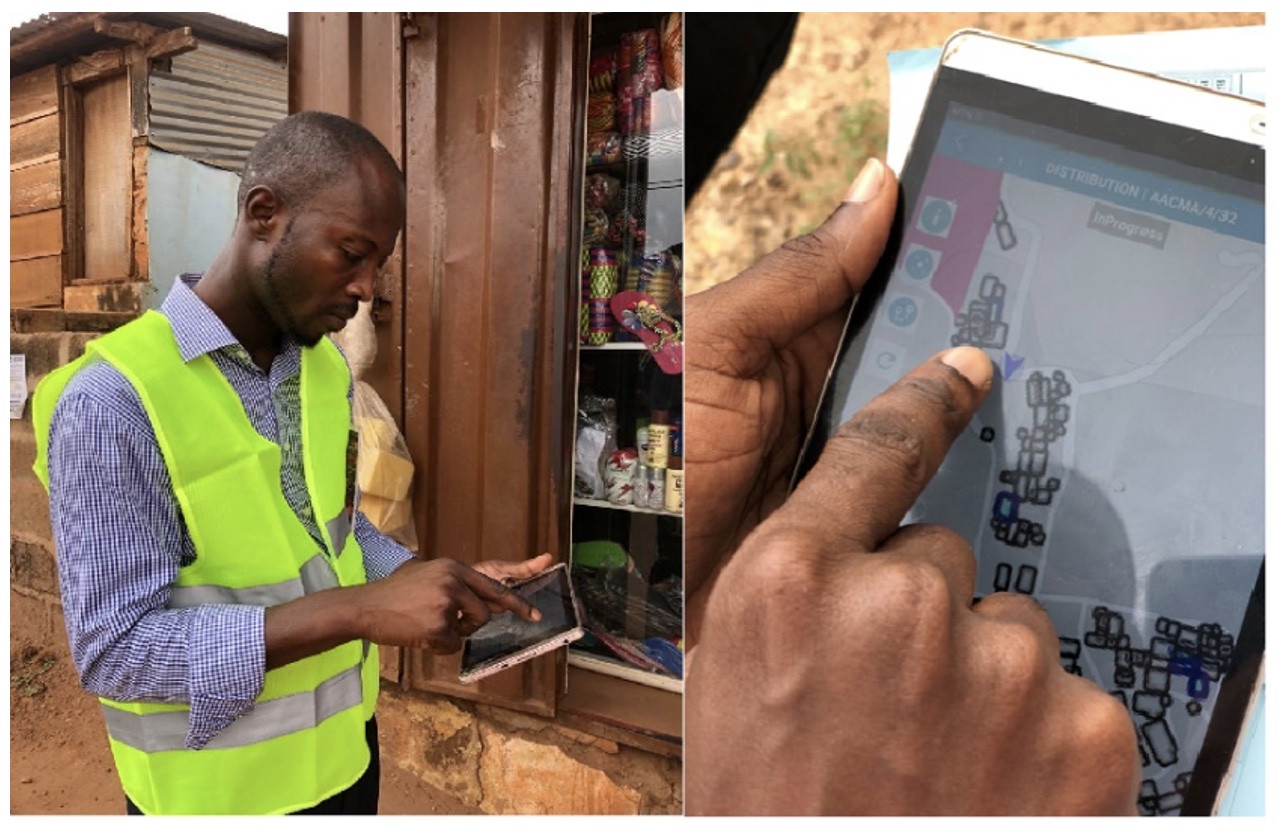 We explore several potential hypotheses for why the treatment effect on collections is so much larger than the treatment effect on bill deliveries. A simple explanation is that households have different attitudes toward payment when visited by collectors who show up with the technology than by the "status quo" collectors without the technology. However, households in treatment and control areas surveyed right after the experiment report statistically similar levels of perceived integrity and ability to enforce tax payments among local government officials. A second hypothesis is that the technology helps reduce leakages wherein payments made by households are diverted by revenue collectors before reaching the local government's coffers. However, several types of household survey questions about the preponderance of bribe payments point to modestly more rather than less bribe activity in treatment areas than in control areas.

We argue that the most likely mechanism is that the technology allows collectors to learn about households that are most likely to make tax payments thereby allowing them to better utilise their scarce time. Using surveys of collector behaviour and strategies, we show that treatment collectors over time report having better knowledge of individual households' propensity to pay and focus more on collecting from households that are more able to pay, better aware of taxpaying duties, and more satisfied with local public goods (Figure 3). Importantly, none of these household characteristics would have been known to the collectors at the start of the study period. The implication is that the technology allowed collectors to learn through repeat visits (or longer visits) about hard-to-observe household characteristics. Consistent with this idea, we document that households with greater liquidity and higher income – which are unobservable to the collectors ex ante – are more likely to be targeted by the treatment group than control group. We formalise this differential learning mechanism in a simple dynamic Beckerian time use model in which forward-looking revenue collectors maximise cumulative revenue collections subject to a time constraint each period.

Figure 3 The extent to which collectors know where the location of households that are more able to pay property taxes, by survey wave (baseline – round 1; midline – round 2; endline – round 3) and treatment assignment 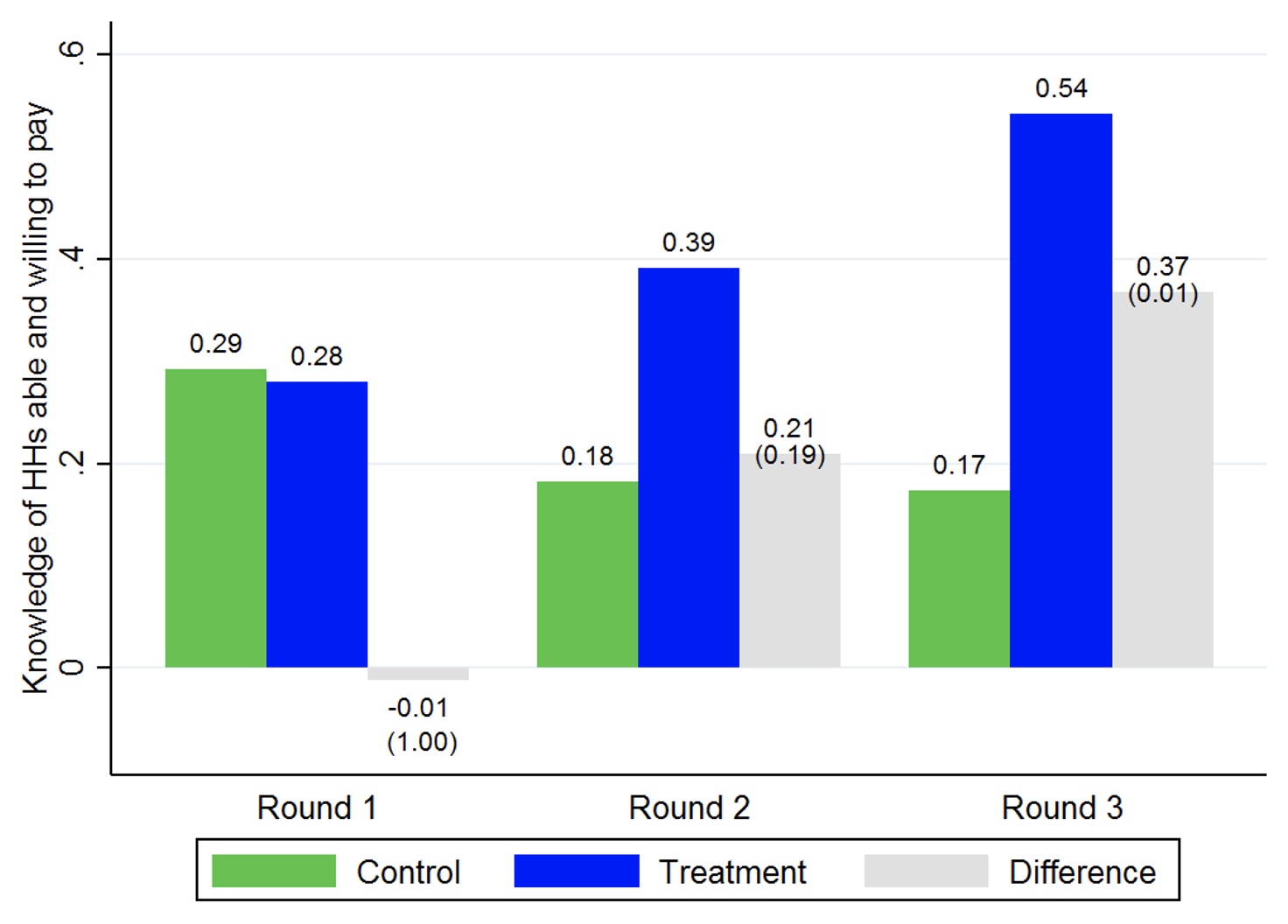 Improved learning through technology has important distributional impacts. The increased information about household income gathered by the treatment collectors, and the subsequent targeting of high-income households, makes the local tax system more progressive. Specifically, technology increases tax payments as a share of taxes due in the top quartiles of the income-asset distribution but leaves tax payments unchanged in the bottom quartile. However, increased information appears to be a double-edged sword, as technology also increases the incidence of bribes with effects concentrated in the bottom quartile. Additional analyses suggest treatment collectors also learn about and subsequently targeted households that were more willing to engage in bribes. This is consistent with our preferred explanation about how technology facilitates learning about which households are more likely to make tax payments.

Information and informational capacity are important for efficient tax collection

Our experimental findings on technology investment shed light on the promises and pitfalls of using technology to build tax capacity. The societal desirability must balance the positive and progressive tax effects against the regressive bribe effects. Our results suggest that the positive effects of technology on tax outcomes are only partly due to the presence of electronic devices embedded with geo-spatial data. Technology allowed collectors to overcome learning constraints in the field (in this case, stemming from navigational challenges) which previously limited their ability to build information about taxpayers' propensity to pay. Our findings therefore relate to papers which show how pre-existing information sources from third parties can be leveraged to improve collection (Kleven et al. 2011, Pomeranz 2015, Naritomi 2019, and Balan et al. 2022). Most prior studies place third-party information at the heart of governments' informational capacity (Gordon and Li 2009, Kleven et al. 2016) while our work shows how in settings where such information-sources are largely non-existent, the state can still strengthen its informational capacity by directly building information about taxpayers' propensity to pay.

Cowen, T (2021), “Does Technology Drive the Growth of Government?” in Essays on Government Growth, Springer.